Known by authorities as boryokudan (violent groups), the yakuza prefer to call themselves ninkyo dantai (chivalrous organizations). They ninkyo dantai (chivalrous organizations). They stealing from the rich and giving to the poor. When there was the Kobe earthquake in 1995, and the Tohoku disaster in 2011, the Yakuza groups were the fist ones to provide help and sehiter for locals.

Yakuza have their offices in city centers, organize press conferences, publish a magazine with haiku poems and participate in tsunami relief efforts. many Japanese people believe the managers in these organizations are smart people who gratuated from top universities. The govt. considers Yakuza semi-criminal organization and indirectly tries to restrict them.

Yakuza members who transgress are forced to cut off their fingers. It starts with a left pinkie, but the more transgressions, the more fingers are to be cut off. Many former yakuza members resort to synthetic fingers to fit better into a society. For this reason, Bob the Builder has 5 fingers in Japan, and 4 everywhere else in the world, so that people would not think he was a yakuza.

The hierarchical structure of a yakuza organization resembles that of a family. New recruits are referred to as a kobun (child), and they are subordinated to oyabun (father). This kobun-oyabun link is cemented in the ritual of sakazukigoto. Kobun and oyabun drink sake, a Japanese rice wine, kobun drinking a smaller portion and oyabun having his glass filled to the brim, a sign of his position of authority. The ritual ends when they swap their drinks.

The yakuza comprise three syndicates, the largest of which is Yamaguchi-gumi with 55.000 members and 80 billion dollars worth, making them one of the richest gangs in the world. They are spread internationally, with the US blacklisting several of their leaders. In 2009, Yamaguchi-gumi gave a 12-page exam to its members, testing their knowledge on Anti-Organized Crime Law. Their members are forbidden from engaging in drug trafficking.

Yakuza members may sometimes be seen at Pachinko parlors. Though pachinko (legalized form of arcade game based gambling) halls are not necessarily run or managed by the Yakuza. Thereare more than 13,000 pachinko parlors in Japan and it is a 300 billion dollars industry, larger than the Japanese automotive industry. Highest concentration of Pachinko is in Kyushu where most jobless ronins used to live and where first well known yakuza groups emerged in the 1800s. Pachinko is legal because the players winn metal balls, not money, which can be exchnaged for prize and that also can be exchanged for money at a separate place.

It is reported that Yakuza buy shares in large corporations, and with them the right to be present at a stockholders’ meeting. The very presence of the yakuza is often enough to intimidate the corporation leadership, but they make it a point to find out as many dirty facts about the leadership as possible, and use them to pressure those corporations.

The yakuza sport full-body tattoos (irezumi) featuring dragons, women, mountains, or samurai. They cover even the private parts of the yakuza, and are seen as a symbol of bravery, because the procedure of their application is very painful and takes a long time. Tattooed skin of dead yakuza members can be found on display in some Japanese museums. 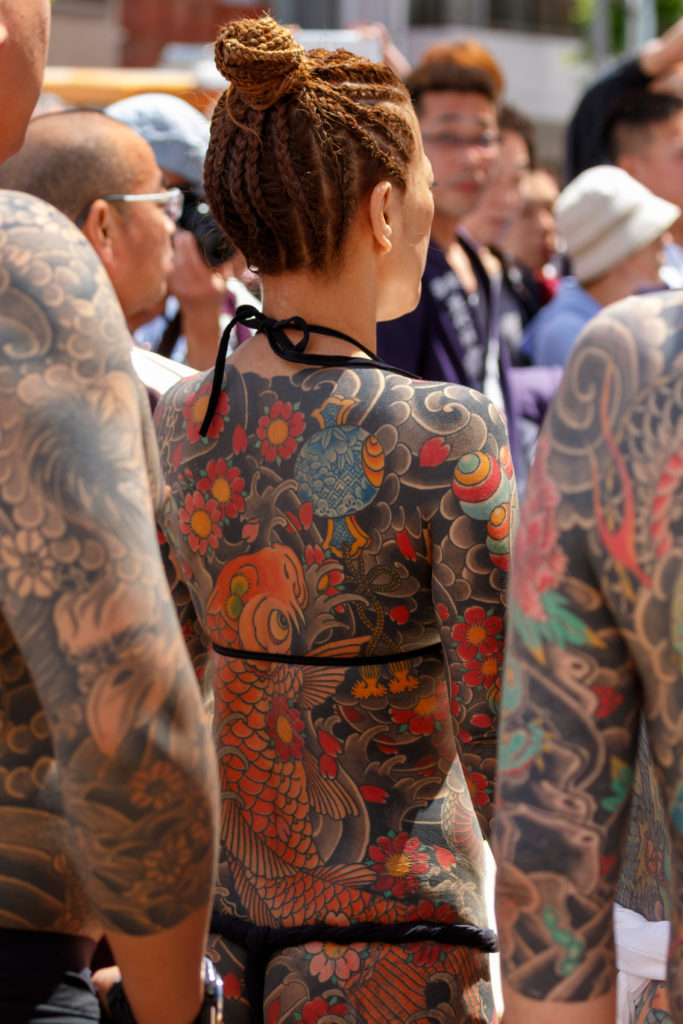