Buddhism. Awakening by following the teachings of Buddha. Everyone can become a Buddha. Refrain from the 5 precepts (harming living things, stealing, etc.). 5 main sects: Tendai, Shingon (e.g. Mt Koya), Jodo, Zen and Nichiren. The world is suffering, don’t eat meat and don’t drink alcohol, believe in Karma and Reincarnation. Arrived from China in 538. Important Values: Transience, selflessness, harmony, balance in the universe, the law of karma, enlightenment is possible when alive, striving for mental strength, suffering is natural and a must. 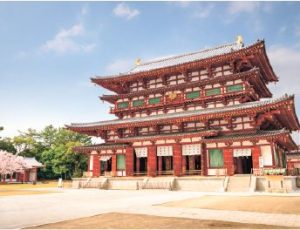 Buddhist temples are called tera and most of the time the name ends with -ji (KinkaJI, GinkakuJI, RyoanJI, etc.) Buddhist temples tend to have big roofs (more than 60% of the building) and gold plated objects on the black background. 5 elements should be observed in a temple: fire, air, water, earth, wisdom. There are 77,000 temples in Japan and 1600 of them are in Kyoto. 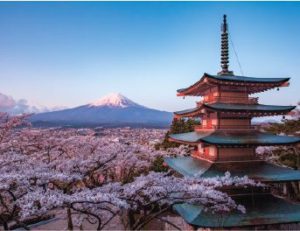 Pagodas are only found in temples, not in shrines. They usually have 3 or 5 stages and they represent the stupa where the Buddha’s ashes were kept. In Japan pictures of deities are placed on different floors. The Horyuji temple’s pagoda is considered to be one of the oldest wooden structures in the world. There used to be thousands of pagodas in Japan but most of them were destroyed by fires or earthquakes. 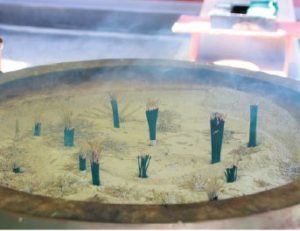 Burning incenses is a typical Buddhist tradition. Buddhist temples have a jokoro and people believe if the smoke touches the body it would heal the body. 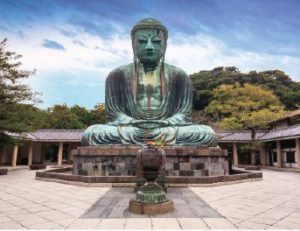 Buddhist temples have many Buddha statues (garutama Buddha) though many people tend to confuse Buddha with Daitoku or Boddhisatwa. The giant Buddha statues are called Daibutsu, The ones in Nara and Kanagawa are to be taller than 10 meters. 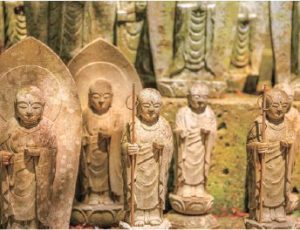 Boddhisatwa is a person who is about to become a Buddha but chooses to remain as humanbeing to suffer for the humanity. Many temples have a few Bodhisatwa statues and also Buddhist deities besides a Garutama Buddha statue. Sanjusan Gendo has many different statues of deities. 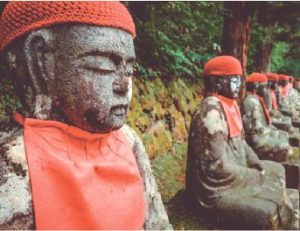 Jizo is a boddhisatwa who is a protector of travelers and protector of little kids. Jizo often wear red bibs and red hats believed to be safe and keep the evil spirits away. 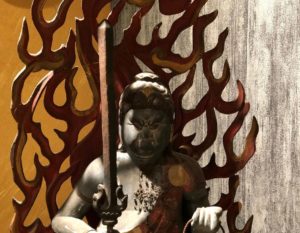 The statues of five heavenly kings are often found in buddhist temples. The most common one is Fudo Myoo (Acala) who holds a sword in one hand (wisdom cutting through the ignorance) and the rope in another (to catch demons). 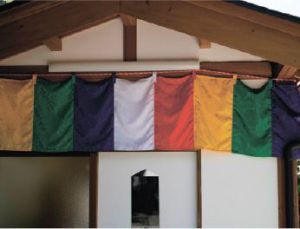 The 5-color flag that symbolizes the 5 wisdom of Buddha. 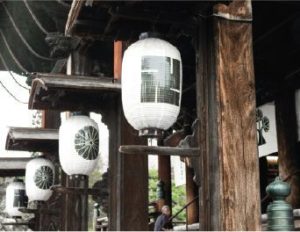 The buddhist temple symbol. This sign represents the balance of opposite powers in life as well as good luck and health. Usually the direction of the lines are different from the typical Swastika sign. 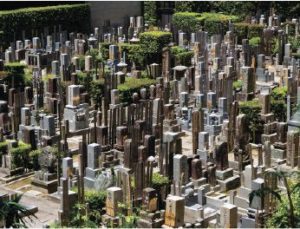 Since traditionally the funerals tend to take place in temples, most cemeteries tend to be inside or near Buddhist temples. 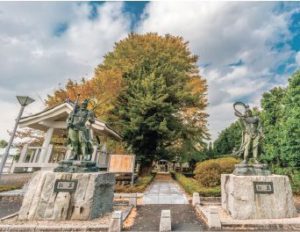 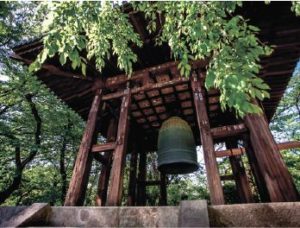 Buddhist bell. Temples have these bells to tell the time or to call the priests for the prayer. Sometimes it was used in the battles to communicate. On the new years day the bell is rung 108 times to rid of the 108 big sins in Buddhism. The dots on the bell also represent the big sins. 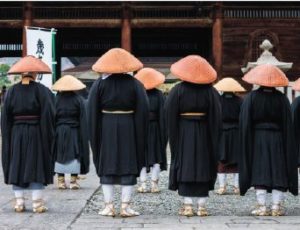 Buddhist monks usually wear black outfit with a bamboo hat and only eat vegetarian food (mostly rice, pickles and miso soup). He lives a very simple life and he does not show emotions. The bamboo hat covers his face because he must be selfless (I am not important, I am no body). 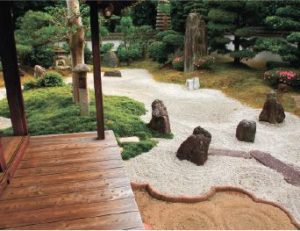 Gardens which are built to represent the universe (ripples*waves, big stones: islands, small stones: mountains and hills, green moss: forest, etc.) usually found at the temples, not shrines. Most rock gardens were built during the Muromachi period. During late Edo and Meiji periods, green gardens were most common. 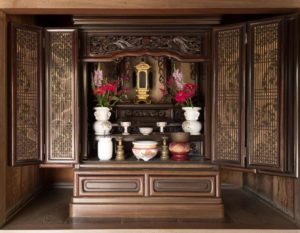 Mostly in a shape of cabinet which is supposed to be a house of Buddha and the house of the spirits of those who deceased. People burn candle sticks on the cabinet or offer rice or tea. They tend to be in the colors of black and gold. 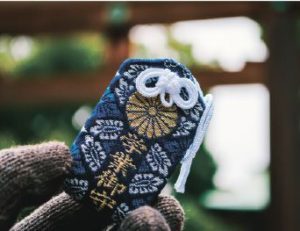 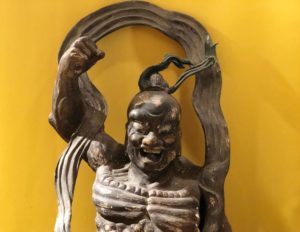 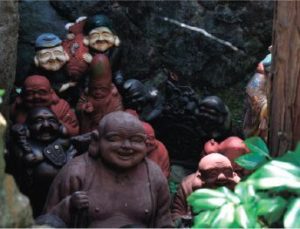 Exist in both temples and shrines. These gods are derived from Hinduism and then spread to China and Japan. Ebisu (God of fishermen and farmers), Daikokuten (god of commerce), Bishamonten (god of war and god of authority), Benzaiten (God of beauty and music), Fukurokuju (god of wisdom), Jurojin (god of longevity), Hotei (guardian of children). 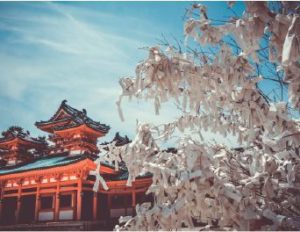 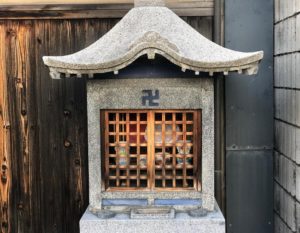 The house of Shinto God. Historically it is the house of a Shinto god but most often, Jizo, and Hotoke, the Buddhist deities are also kept inside with the Buddhist symbol on the roof as shown in the pic. Tomoe. 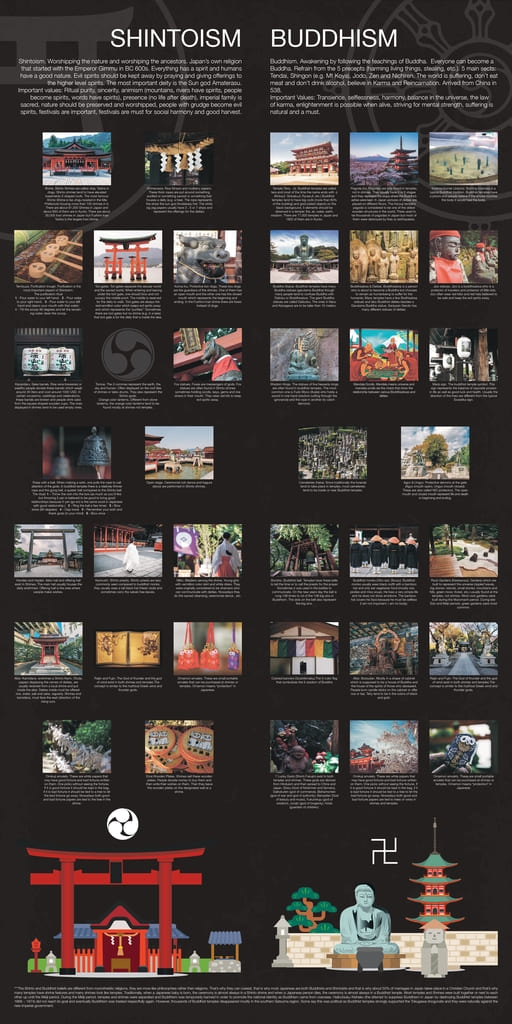