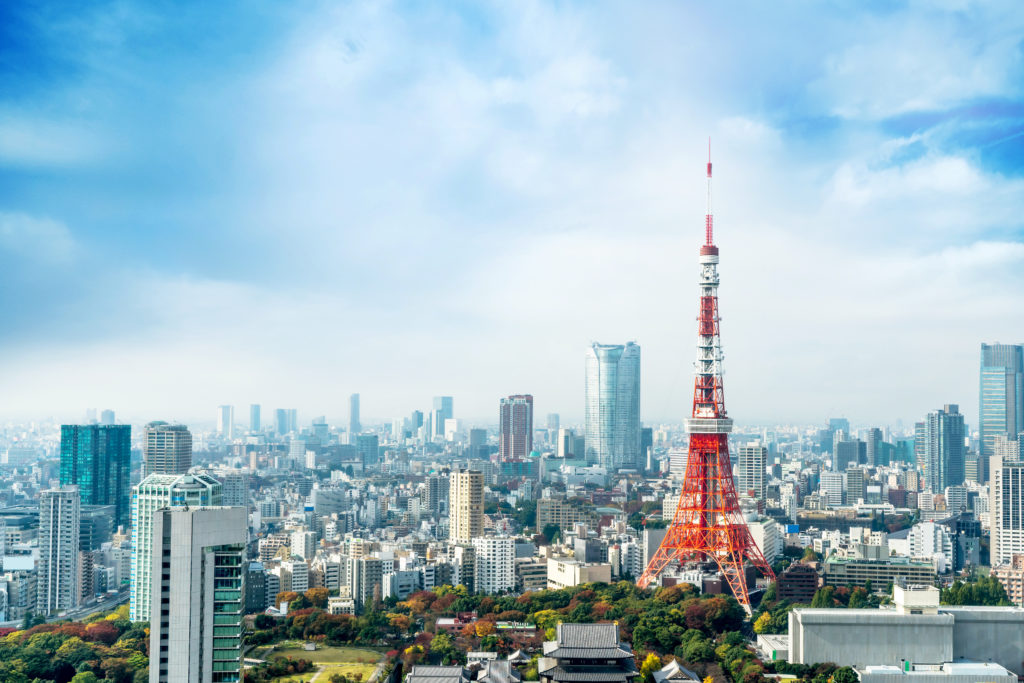 Tokyo is an exciting place to be, so much going on, so many places to explore, and plenty of options when it comes to accommodation. But what makes Tokyo so unique is that more than just being a sprawling metropolis, it’s a city that’s comprised of many city-like suburbs, it’s 100 cities in one. So knowing where to stay is going to impact your visit like you won’t believe. 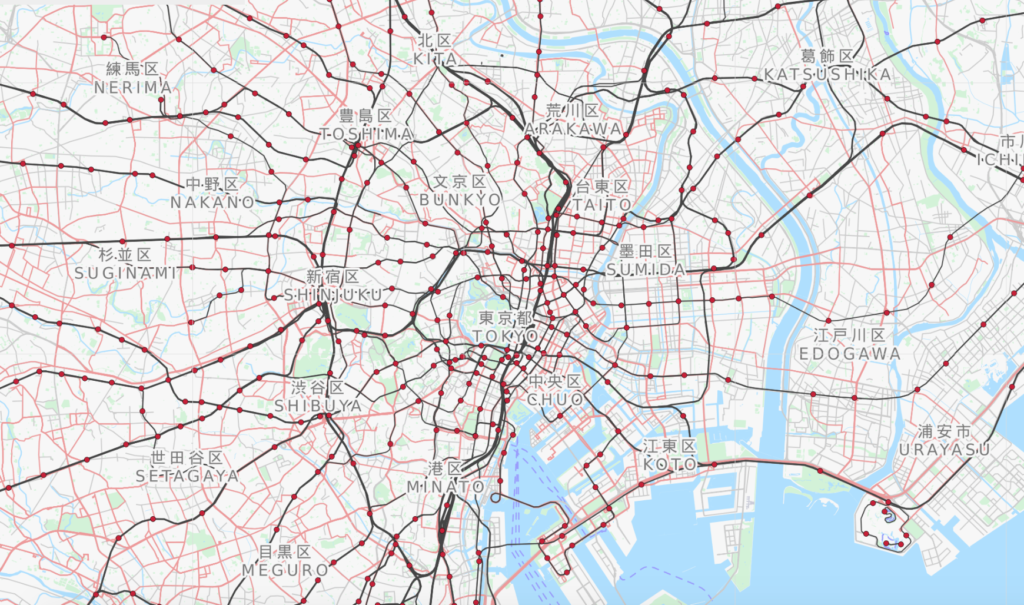 If you’re the more laid back type, a neighborhood a little out of the city would be best, as it offers the convenience of inner-city living without the crowds. However, if you want to be in the center of the action, the neon-light drenched streets of Shibuya and Shinjuku will be more to your style. To help you out, here’s a guide on where to stay and what hotels you should book, depending on your traveling style.

These are all central city choices. If you’re looking for something close to the city’s biggest skyscrapers and busiest train stations, then these are the neighborhoods for you.

Tokyo’s busiest train station, Golden Gai drinking district, Kabukicho’s party central, and monolithic shopping centers on almost every corner, then Shinjuku is the place for you. It’s very convenient and easy to access most destinations here, but do be warned, it truly is the neighborhood that never sleeps, so it’s not for the faint of heart.

Similar to Shinjuku in many aspects, but more stylish than salaryman central, Shibuya was once considered the city’s youth hub, and to some degree, that reputation remains true to this day. While it’s home to Shibuya Scramble crossing and plenty of department stores selling the best new clothes, its backstreets feel a little more laid back. It’s an easily accessible spot to set up a home base if you’re looking to explore some of the city’s more stylish suburbs like Shimokitazawa and Dikanyama.

Known as the ex-pat party central, this neighborhood is home to some of Tokyo’s biggest players in the art and finance scene, making it a little more expensive than some of the other destinations on this list. It’s a great place for those who like the international clubbing scene and fancy food. During the week it’s great for dining out, but the weekends tend to get a little wilder.

For something a little more laid back and local, then a stay in one of the city’s more suburban, family-friendly neighborhoods would be best. Each of these neighborhoods offers easy access to the rest of the city as well as the convenience of inner-city living, just with a more relaxed ambiance.

This is a pocket of the city overflowing with classic downtown traditional Japanese charm, like family-owned restaurants and hip new cafes taking up residence inside slightly shabby buildings. It’s not home to the city’s most slick destinations, but it’s a quaint and peaceful side of the city not far from the bustling Ueno district.

Considered one of Tokyo’s most desirable destinations to live, Kichijoji balances the business of a popular suburb with the charm of a small, tight-knit city. The area is home to the famous Ghibli Museum, the sprawling Inokashira park, and plenty of dining and shopping destinations. It’s also far enough from the city’s other suburbs to avoid the manic energy of big city living.

Trendy, laidback, and full of creative energy, Shimokitazawa is a neighborhood predominantly filled by locals, thanks in large part to the lack of hotels in the area. There are hostels though, and it’s close enough to Shibuya by train to feel like an extension of the suburb almost. If you like music art, culture and cafes then this is the place for you. 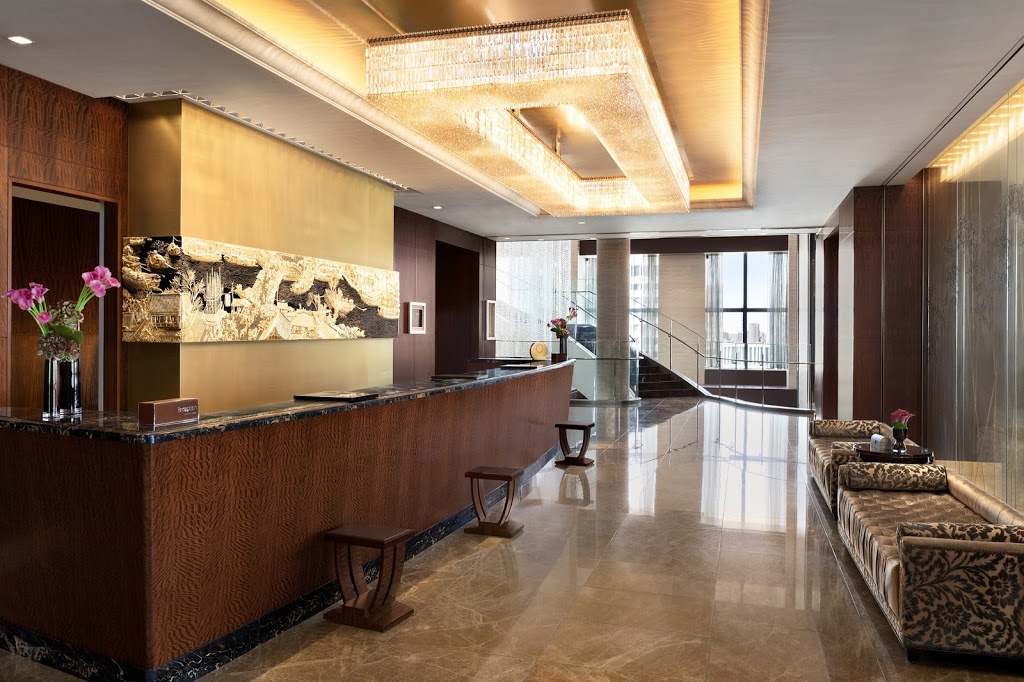 A 10-minute walk from both the Imperial Palace and the upmarket area of Nihonbashi, the Shangri-La Hotel is the most luxurious of hotels in a very impressive location. Taking over on the top 11 floors of the Marunouchi Trust Tower Main Building, the hotel has incredible city views, excellent spa facilities, and three world-class restaurants. It’s not cheap, but the Shangri-La is the best of the best. 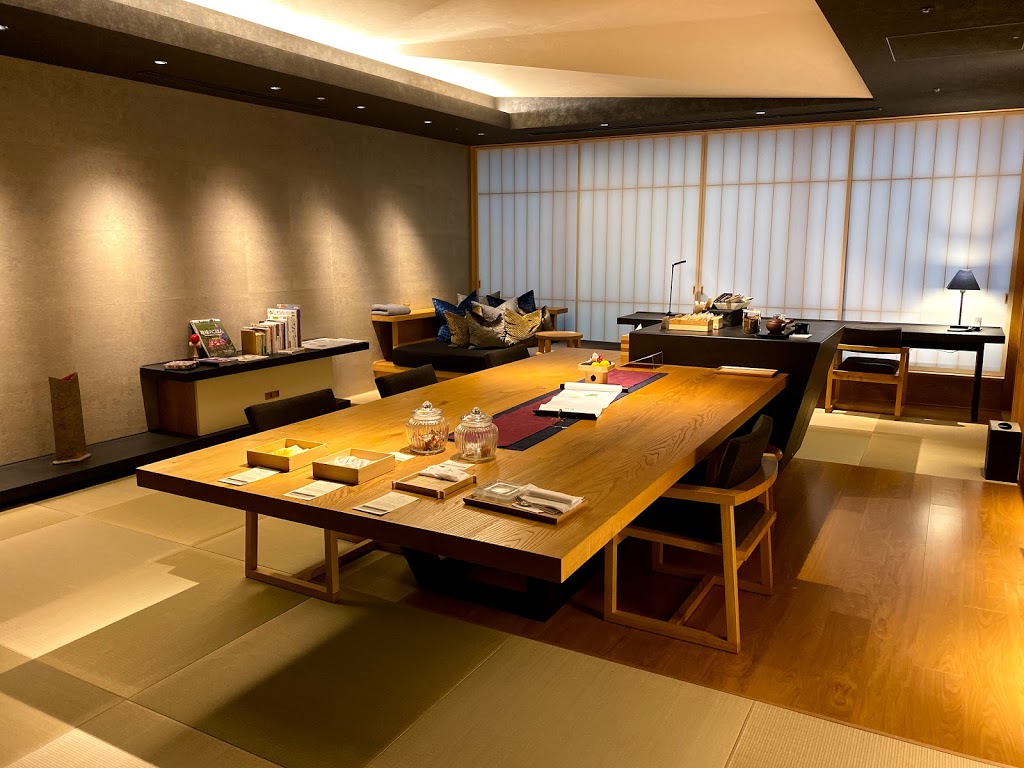 Blending modern hotel luxury with traditional ryokan hospitality is what Hoshinoya Tokyo does best.  The 84 room hotel is designed to feel like several smaller ryokans, with each of the individual 17 floors having its own ambiance and central lounge space. Following the precedent set by classic ryokan inns, breakfast is served in the rooms and many of the on-site onsen baths are open-air. 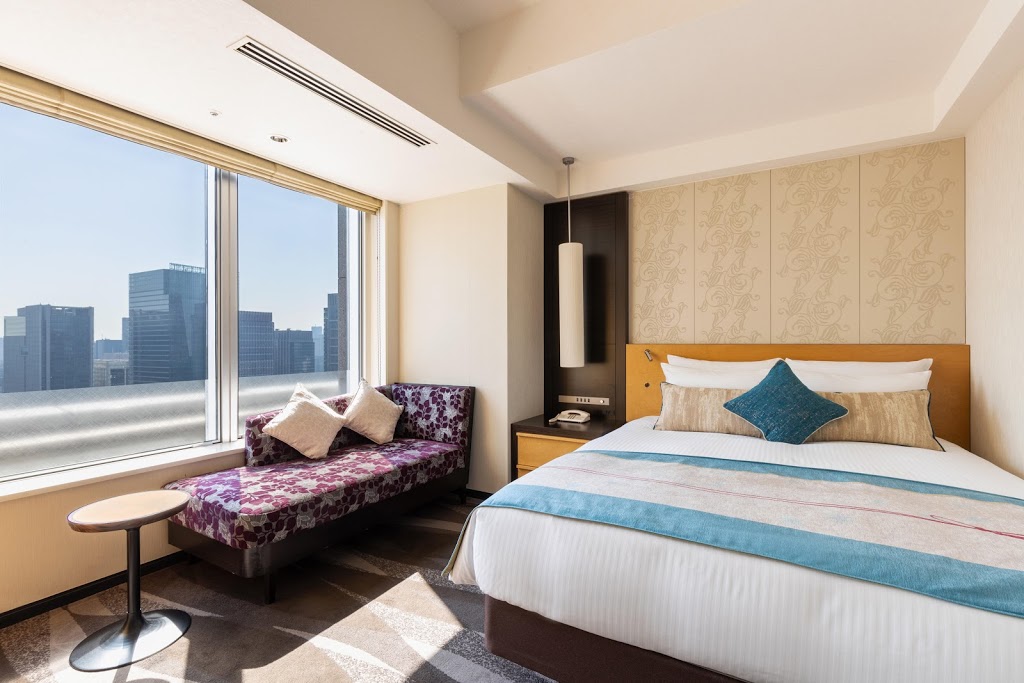 The Hotel Metropolitan Tokyo Marunouchi is perfect for those who want to enjoy luxurious Tokyo living with easy access to Tokyo Station and the popular area’s scenic surroundings, as it’s only a five-minute walk from the Imperial Palace. This hotel serves an impressive, free buffet breakfast offering massage services on request. For the best view of the Imperial Palace, head up to the 27th floor’s TENQOO restaurant and bar. 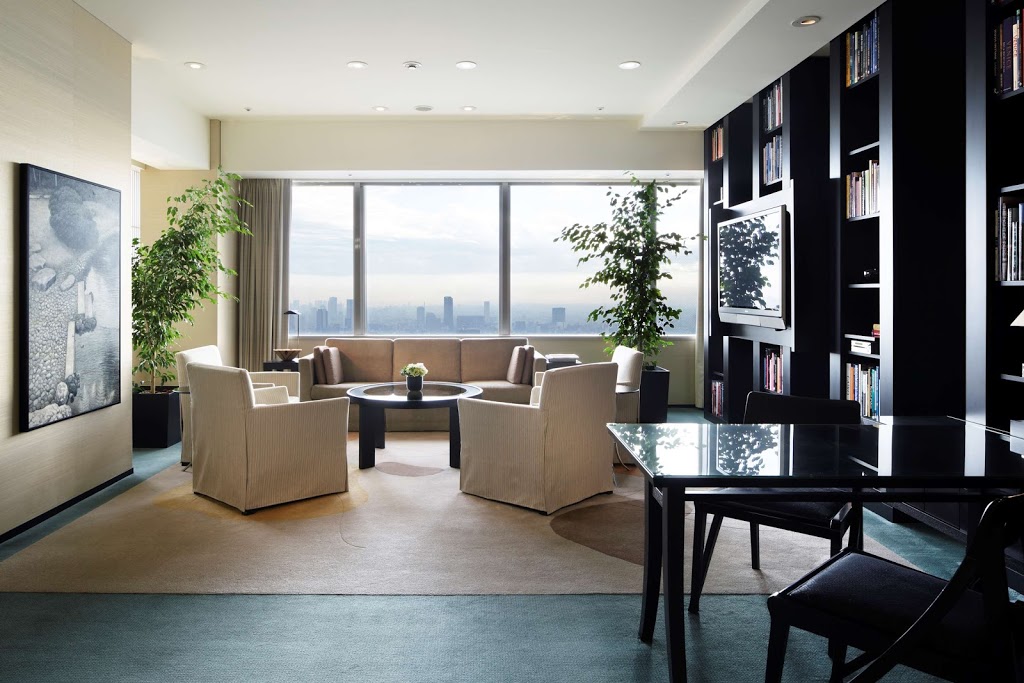 Probably Tokyo’s most famous hotel thanks to Sophia Coppola’s 2003 cult hit Lost in Translation, starring Bill Murray and Scarlett Johansson, the Park Hyatt is inner-city luxury at its best. Located in downtown Shinjuku, Tokyo’s most vibrant neighborhood, it’s surrounded by bars, cafes, restaurants, and other nightlife hangouts, but it’s also home to one of the area’s most famous attractions, the New York Grill – a bar on the 52nd floor of the hotel, which boasts one of the best views in the city. 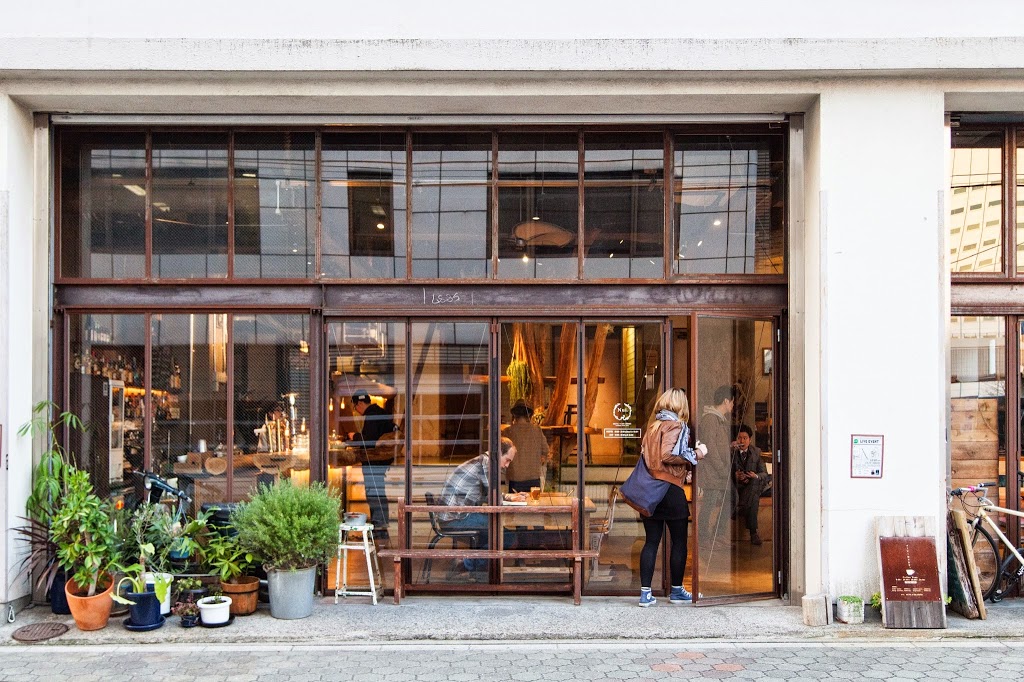 Nui Hostel is the type of place that proves hostels don’t have to be scruffy shared accommodation options, they can be just as stylish as the city’s boutique hotels. This hostel, bar, café, and live music space features a variety of rooms, the hostel’s contemporary design even draws locals to the popular ground floor bar which hosts live acts and art-centric events.

Try and find somewhere close to a station, it may be a little more expensive but it’s going to save you a lot of hassle, especially in the middle of summer and winter when the weather is particularly unforgiving. A hotel on the Yamanote train line (Tokyo’s city loop line)  will be the most convenient option for getting around. Plus if you have a JR train pass, access to the Yamanote line is included! 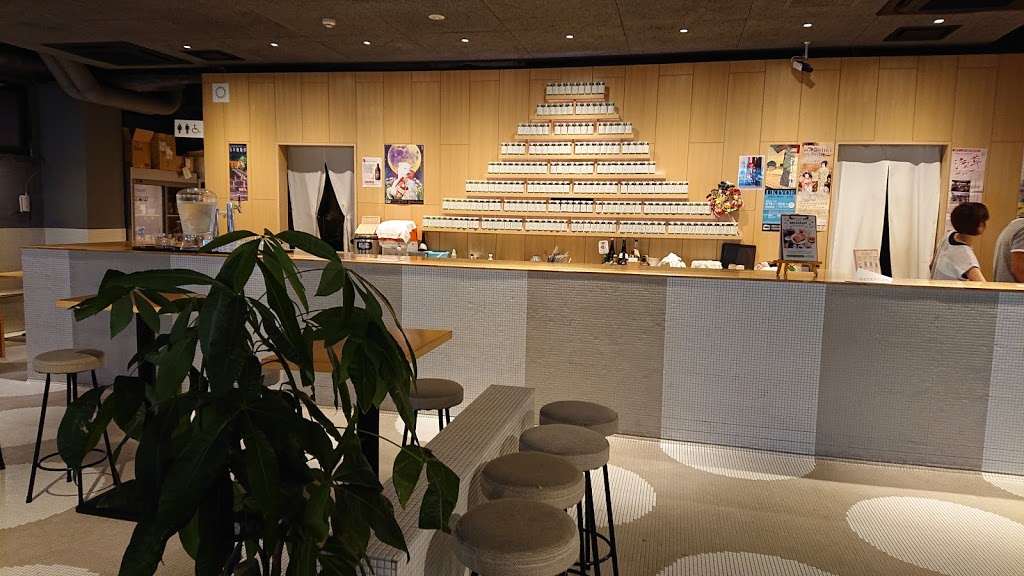 Sitting in the heart of Tokyo’s traditional pocket of Asakusa, Bunka is a welcome retreat for travelers of all sorts. Situated inside a  once decapitated commercial building this hostel has completely transformed the space into an accommodation option for those with impeccable taste. It’s more of a stylish hangout than a party destination, but that’s not to say it’s not worth a visit!  They also have an izakaya on site.

This modern version of a hostel chain is so big; they now have three outposts in Tokyo alone: Akihabara, Nihonbashi, and Asakusa-Bashi. Grids were made for travelers looking to build connections and the brand’s focus is on bringing people together. With dorm to family and private rooms available it’s great for all sorts of travelers looking to make new friends.

Airbnb is strictly regulated in Japan, and as a result, the price of Airbnb rentals may be higher than you would expect. Recent laws imposed Airbnb owners to apply for hotel-like licenses to run their accommodations. If you are looking for secure, affordable accommodations, one of the city’s stylish guesthouses or modern lifestyle hostels would probably be a more suitable option.

Generally considered Tokyo’s first designer ryokan, Andon Ryokan is where modern convenience meets classical Japanese design elements. Positioned about 20 minutes from Asakusa by foot, the inn is a popular option for those who want to experience both the traditional and contemporary sides of Tokyo in luxury. Andon Ryokan also hosts several cultural classes and activities like flower arranging, tea ceremonies, and origami workshops for those who want to immerse themselves in Japanese Culture.

In Tokyo’s Adachi ward is where you’ll find Ryokan & Day Shizuku. While central enough to reach the city’s main tourist attractions like Tokyo Skytree and Sensoji Temple in 30 minutes by train, it’s far enough away from the manic energy of the city’s crowded central hubs to feel like a tranquil retreat. The ryokan combines classic traditional Japanese design with familiar comforts like large Western beds and open-plan rooms. Each room also comes with a wooden bath and small private garden, an ideal retreat for those looking for somewhere to unwind after a long day exploring the city.

One of Tokyo’s most historic neighborhoods, Asakusa, just a two-minute walk from the famous Sensoji Temple (the city’s oldest temple), and a five-minute walk from Asakusa Subway Station is where you’ll find Ryokan Kamogawa. The ryokan inn combines tatami-mat rooms with Western beds, blending modern comforts with traditional Japanese aesthetics. It also has an on-site restaurant and also features a grill restaurant called Kura, making it a must not miss for those who want the ‘true’ Japanese experience.

You’ll have an amazing experience in Tokyo with our hotel guide.

There are many Tokyo activities you definitely will need to try during your stay in Japan!

In 1604, four years after his involvement in the battle of Sekigahara, Miyamoto Musashi, one of Japan's most famous swordsmen, challenged Yoshioka Seijuro, the head of the Yoshioka school of kenjitsu, to a duel. The Yoshioka school was one of the eight major kenjitsu schools called the Kyohachiryu,

Take a shamisen lesson at Maikoya

“The shamisen or samisen (三味線), also sangen (三絃) — both words mean “three strings” — is a three-stringed, Traditional Japanese musical instrument derived from the Chinese instrument sanxian. It is played with a plectrum called a bachi.” wiki. Maikoya organizes shamisen lessons

In the dying days of the Edo period, characterized by brutal conflicts between the Bakufu and pro-Imperial loyalists, Emperor Komei sought a peaceful reunification via an alliance between the Imperial Court and the Tokugawa Shogunate. The peaceful resolution to a centuries old conflict was an ideali

March 8, 1866 was a night of well-deserved rest for master swordsman Sakamoto Ryoma. A pro-loyalist, he had just helped negotiated an alliance between Choshu and Satsuma–two clans with a long history of rivalry. The alliance was a big step toward finally ending the Tokugawa shogunate and Ryoma was

The Best Onsens in Osaka

あまみ温泉 南天苑 Amami Onsen Nantenen It is a building registered as one of the tangible cultural properties. The appearance of the classical building blends into the Japanese ga