Sumo means “wrestling” in Japanese. More than 1000 years ago there were sumai tournaments where a representative of each province used to travel to a noble court and fight with the other province representatives. Some researchers also claim that the ritual was about a human being and a deity match.

– The first sumo match with the public spectators was organized by Oda Nobunaga in the late 1500s. Most sumo rules that exist today emerged in the 17th and 18th centuries during the Edo period.

– The wrestler that pushes the other side out of the ring or makes any part of his body (except the sole) touch the sand, wins the game. Also if the mawashi (loincloth) of the wrestler comes off, he loses the match.

– The wrestlers must put their both fists on the ground and jump simultaneously when the referee gives the sign. The referee points the gunbai (the war fan) in the direction of the side that wins the game. The winning side receives the envelopes with money if the game is sponsored (usually $300 per sponsor).

– The bouts last 20-30 seconds and there is a ceremony before each bout. The wrestlers throw salt to the stage and do irregular warm-up routines to distract their opponent. If the bout takes more than 4 minutes the referee asks for a break.

– There are no weight-based divisions meaning the weights of the wrestlers are not equal.

– A wrestler who becomes the champion in two consecutive seasons or who has some outstanding achievements becomes the yokozuna. The yokozuna has the highest ranking among all the sumo wrestlers. Below Yokozuna there is ozeki, sekiwake, and komusubi.

– Just like the geisha system one cannot become a sumo wrestler on his own. He must belong to a sumo house and enter the sumo house at a young age where all of his expenses are paid.

– Junior sumo wrestlers must wake up at 5 am. Sumo wrestlers cannot have breakfast. They have to take a siesta after a bug lunch. Junior members must live in the dorms of the sumo house they belong to.

– Sumo wrestlers must wear a kimono and the chonmage hairstyle (similar to the samurai hairstyle) in public. Young sumo wrestlers must wear wooden sandals: the sound of the sandals reminds them that they should still practice!! – In a typical sumo tournament, brothers and the members of the same sumo house cannot face each other more than the final.

– Compared to other athletes, sumo wrestlers make relatively less money. The yokozuna (top sumo wrestler) gets approximately $100,000 after winning one tournament and about $ 30,000 monthly salary. Sumo wrestlers in the top division make about $8-10K a month. Most sumo wrestlers (those lower than the 2nd division don’t get salaries other than some stipend).

Sumo wrestlers and Geisha have many things in common 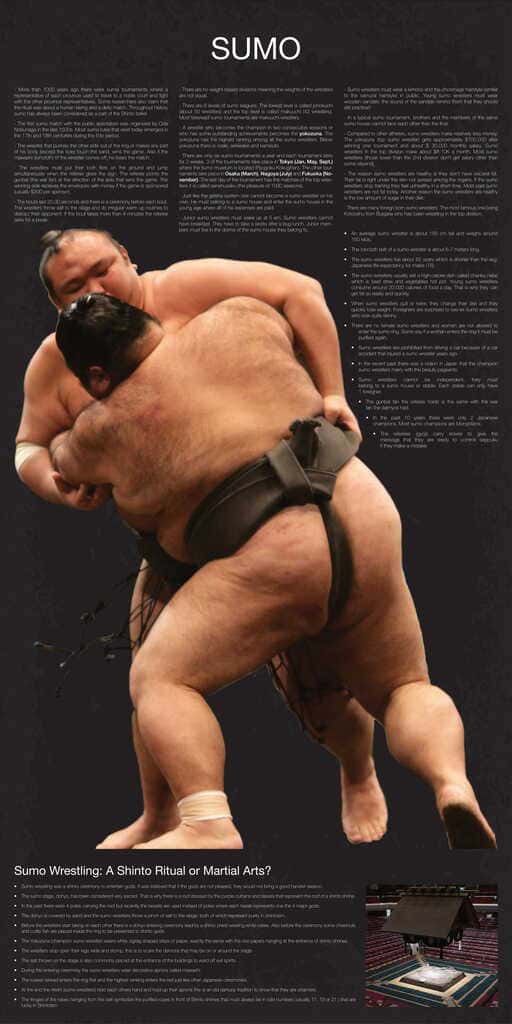