The main purpose of tea ceremony is improving the bonding between the host and the guest and also gaining a peace of mind in our busy daily lives. Tea ceremony has many deep meanings and implications, it would be an understatement to mention just one simple purpose. Despite the common view, the goal of tea ceremony is not drinking the best tasting tea, but the ritualistic preparation and enjoyment of tea in a zen way.

People also ask the goal of doing tea ceremony in Kyoto. There are several reasons why many travelers choose to do tea ceremony in , the first one being the image of “cultural capital of Japan.” The founder of tea ceremony Sen no Rikyu built many teahouses in Kyoto and the major tea ceremony schools were born and developed in Kyoto. Additionally, most historic teahouses that are listed as a national treasure by the Japanese government are located in Kyoto City. Not only foreign travelers, but also domestic Japanese travelers tend to associate Tea ceremony with Kyoto and try this experience during their visit to Kyoto.
The significance of tea ceremony in Japanese culture cannot be argued as it has been introduced to Japan by the respected zen monks, practiced by powerful daimyos, brought together rival samurais and used performed as an art form for centuries. After the post war Japan many marriage age women were expected to be trained in tea ceremony to become better hosts and nowadays most elementary school kids learn tea ceremony to understand the importance of silence, concentration, discipline and turn taking. Read more about tea ceremony history .
Let’s talk a little bit more about the goal of tea ceremony…
When it comes to bonding, one realizes that tea ceremony is an opportunity for the tea host to demonstrate the highest level of respect and humility for the guests by tediously preparing the tea in front of them.” The ultimate purpose of tea ceremony is for the host to provide a harmonious and pleasurable experience for her guests, clearly invoking the “will to do good” in relationship to others. This is manifested, not just in the making of tea, but in the careful selection of utensils, tea bowls and sweets. Each utensil should not only blend harmoniously with all the others, but also reflect the occasion for the tea ceremony and the host’s relationship with the guest.” Dinara Chetrova stated that the goal of tea ceremony is creating a moment of beauty and sharing it with others.
Tea ceremony also has roots in the Zen philosophy which presumes that awakening and enlightenment can happen in this life through simple routines and activities. At Maikoya we always mention “ichi go ichi e“ each moment is unique and it never reoccurs. In that sense, the purpose of tea ceremony is being present in the moment and realizing the the true value of each moment with the help of relaxing tea. One author suggested “The purpose of meditation is connecting to the mind of the universe through sitting quietly. The purpose of the Tea ceremony is same.”
“Original purpose of the tea ceremony is to cleanse the six senses. For the eyes, there are the hanging scrolls and flower arrangements. For the nose, there is incense. For the ears, there is the sound of hot water. For the mouth, there is the taste of tea. And for the hands and feet, there is the correctness of form. When the five senses have thus been cleansed, the mind will be purified.” From: Hagakure by Yamamoto Tsunemoto

Sen no Rikyu stated that the purpose is just “boiling water, making tea and drinking” but he was the one who introduced the zen way of tea known for his famous words “When you hear the splash of the water drops that fall Into the stone bowl You will feel that all the dust of your mind is washed away.” Reading the books and studies on tea ceremony one realizes that the meditation aspect of tea ceremony is the most common followed by the bonding. This is a good summary take from Fling’s Psychological Aspects of Tea ceremony. 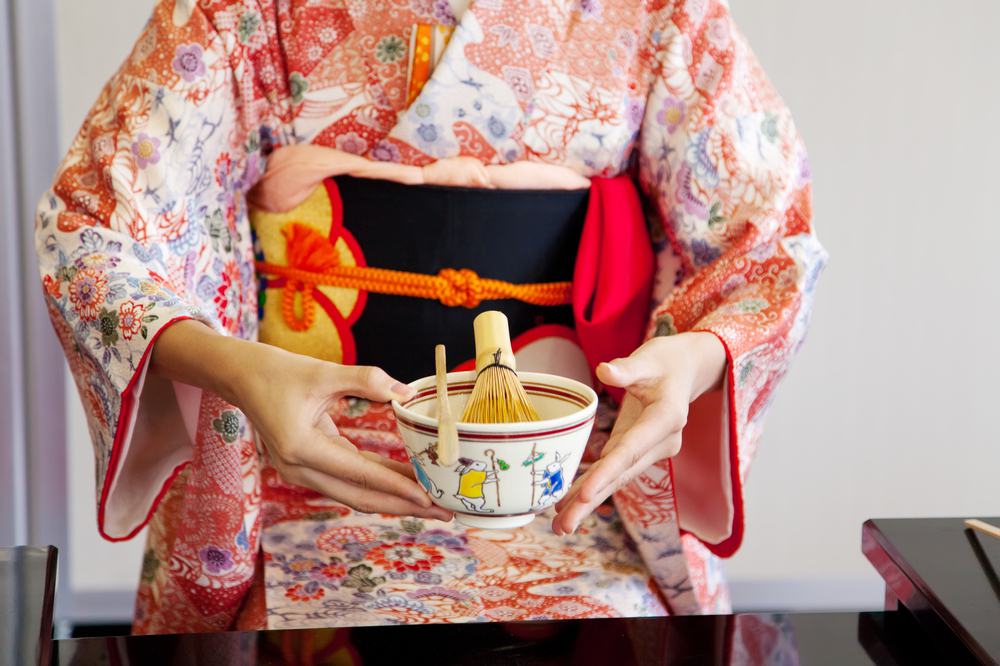