There is no record of an American born samurai but Commodore Matthew Perry is the person who ended Japan’s 260 years of self declared isolation in 1853 by forcing the Shogunate to sign a trade agreement. After the WWII, General MacArthur first ordered confiscating all samurai swords and started melting them for secondary use but the Japanese convinced him that a sword is a piece of art and then he allowed the soldiers to take the swords home as a souvenir. It was said that in the early 50’s there were more samurai swords in other countries than there were in Japan

During the Bakumatsu chaos period (1853 ~1869) some Germans visited and lived in Japan most famous of whom was Edward Schnell who was allowed to wear a sword and given the Japanese name of Hiramatsu Buhei. He trained troops of the Aizu clan who sided with the shogunate clan and also sold weapons to local daimyos. Interestingly he also established a farm in California in 1870s along with a number of samurai which is the first Japanese establishment in the US. Additionally, the modern Japanese constitution which was put together by Ito Hirobumi, Japan’s first prime minister who is coming from a samurai family, after he met with German officials and discussed details in Germany in 1881 and 1882. Some suggest the Nazi adopted the Swastika from the samurai but this proposition is not confirmed.

Thomas Blake Glover from Abeerdenshire was a merchant who perhaps changed the history of Japan. He came to Nagasaki, Japan in 1859 and started trading green tea. Later he established his Japanese company and sold many rifles and advanced weapons to Satsuma and Choshu clans which were used to topple the Shogunate during the Boshin war. Glover also was involved in the building of the first warships for the Japanese navy. The warship building company he helped establishing later became the Mitsubishi Heady Industries. He received the prestigious the rising sun award from the emperor and his house in Nagasaki is currently the oldest foreign built house in Japan.

Jules Brunet who was sent by the French government to Japan in 1867 in order to train the shogunate forces which was critical during the civil war. The troops he trained clashed against the emperor supporters in the Battle of Toba Fushimi in Kyoto and the Boshin war in 1868 but they lost both. He led the shogun supporters up north to Hokkaido and helped establishing a new government called “Ezo.” The Ezo government did not last more than a year and he eventually left to France where he became the minister of War. It is said that the movie “Last samurai” was based on him.

Jan Joosten van Lodensteyn of Delft is one of first well known Western samurais who was born outside Ja- pan but elevated to the samurai status. He was named Yayosu and allowed to carry 2 swords. He was not al- lowed to go back to the Netherlands but had the status of hatamoto that is “the retainer of the shogun.” Also when the Shogun Tokugawa Iemitsu declared seclusion (sakoku) by banning Japanese from traveling abroad (1635) and deporting all foreigners (1641) the Dutch were given a special status. The Dutch, mostly represented by the Dutch East India Company, was provided a small man-made island in Nagasaki named Dejima shown in the picture, where they traded with Japanese as the only foreign nation. In 1700’s many samurais studied “rangaku” meaning Dutch studies.

Francis Xavier is the first Christian missionary who arrived in Japan in 1549 and had a huge impact on the relationships between the samurai clans. He was first welcome by the Shimazu clan who controlled Nagasaki and most part of Kyushu with the expectation of arms and trade privileges but later pressured him to leave. He established close relationships with other daimyos and some daimyos converted to Christianity after his departure. It is said that even Oda Nobunaga was a Christian who said Buddhist monks promoted suffering but lived in luxury. Xavier converted 200 commoners into Christianity which later grew into hundreds of thousands. However, Christians were widely persecuted by Toyotomi Hideyoshi in 1597 and the Shogunate in 1638. The Shimabara rebellion, where more than 30,000 people were killed by the shogunate, was led by Christians in Kyushu. Today only about 2% of Japanese population is Christian. The Hollywood movie “Silence” explains the suppression of Christians in the Edo-period Japan.

Yasuke (1555-1590) was a black samurai of African origin (from Ethiopia, Mozambique or South Sudan), described as being a foot taller than other men of his time and “having the strength of ten men“. He was brought to Japan in 1579, by Jesuit missionaries and made a bodyguard to Oda Nobunaga. Upon seeing him for the first time, Nobunaga found it hard to believe that his skin was really black, so he asked him to take his shirt off and scrub his skin to prove that it was not ink. He became a samurai and Nobunaga’s sword bearer in 1581, and he often dined with his master at the same table, a privilege not often afforded to a samurai. Yasuke’s career as a samurai ended when Nobunaga committed a seppuku (ritual suicide), after being defeated by his former general Mitsuhide.

In the late 1700’s, Russian explorers visited Hokkaido including Adam Laksman who was so persistent that he would only leave Japan if the officials signed a trade treaty with Russia. The locals gave him a document which stated he could bring one ship to Nagasaki with the restricted trade conditions. When the ship came a year later, it was not allowed in the Nagasaki Harbor because the document had no validity. A century later, in 1904, Japan and Russia had a battle in the Northern part of China and first time in history an Asian nation defeated a Western nation when Japan won the Russo-Japanese war. In 1939 the Japanese and Russians faced each other in Manchuria again but this time Japanese forces lost.

William Adams from the city of Kent is one of the first Western samurais. William Adams ( 1564- 1620) also known as Miura Anjin, was the first Westerner who became a samurai and also the first Englishman who reached Japan, back in 1600, when one of the ships of the fleet sent to establish trade relations with Japan, sailed into Japanese waters. Members of the crew were detained under the accusation of being pirates, and Adams was brought before the powerful daimyo (feudal lord) Tokugawa Ieyasu. Ieyasu was so impressed with his knowledge of ship-building, that he appointed him as a diplomatic and trade advisor. He helped Japan build its first Western-style ships and also acted as a tutor, official advisor and commercial agent. As a sign of gratitude, he was given an estate and was named a samurai and given two swords- a sign of his new status. Forbidden to leave Japan, Adams married a Japanese woman and had 2 children with her.

The two Portuguese traders who were on a Chinese ship that was dragged to the Tanegashima island in 1542 are the first Europeans to land in Japan and they are also the ones who introduced matchlock to Japanese. The local daimyo, who saw them using rifles to hunt ducks, bought two sets of the arms and had the local blacksmiths make copies in a short time. 20 years later, there were no battles fought without rifles and there were more firearms per capita in Japan compared to any other country in the world during the mid 16th century. The Portuguese also introduced tempura, the battered and deep fried vegetables, to Japan. Portuguese enslaved and sold many Japanese, especially women, in Europe and West Indies they were expelled after the Shimabara rebellion.

There were a number of Christian clans in Japan during the second half the 16th century and they opened first Japanese embassy in Italy in 1582 to be close to Pope Gregory XIII. 30 years later Hasekura Tsunenaga, the retainer of famous samurai Masamune Date also visited Italy as practical ambassador of Japan. Japan and Italy also fought together in Manchuria in 1899 and cooperated against Germany during WWI.

Kim Yeo-Cheol (Wakita Naokata) was the most powerful foreign samurai in Japan’s history. His father was killed during the Japanese invasion of Korea in 1592 and he was brought to Nagoya castle as a prisoner. He was later adopted by the Wakita family in Kanazawa, the retainer of the Maeda clan. He demonstrated bravery and success during the summer siege of Osaka castle and was given 1000-koku domain. He later became the commissioner of Kanazawa city. Japanese forces invaded Korea in 1592, 1598 and also 1894 by using the same routes and causing damage on the land.

There is a record of Chinese samurai whose name is Kawaminami Genbei who lived in Kagoshima. He was a shipping merchant but he was allowed to wear two swords which puts him above the ranking of a commoner. China and the Chinese culture were very important to samurai. The first samurai swords were the replica of Chinese swords and the martial arts spread to Japan from China through the Ryukyu Kingdom in Okinawa and the Chinese generals who fled the mainland after the Tang dynasty fell in the 10th century. The samurai admired Chinese calligraphy and poets. Zen Buddhism which came from China was first adopted by the samurai.

After the shogunate collapsed, the imperial government sent many training missions to Europe and during one of these missions the Japanese envoy was officially received by the Ottoman sultan and presented many valuable gifts and medals. Later, the top Japanese diplomat visited Istanbul in 1881 and then the Japanese prince gave the imperial Christenmum medal to the Sultan in 1887. In return, the Ottomans sent a frigate with 600 crew members to Japan as a goodwill gesture. Since both Japan and the Ottomans had rough relations with Russia, they tried to build close ties. The frigate had many mechanical issues but still managed to make it to Yokohama after 11 months. The captain launched the voyage back to Istanbul in September of 1890 which is the typhoon season in Japan. The ship drifted to the rocks in Wakayama and finally sank, killing more than 500 on board. The 70 members who survived were taken care by the locals and eventually sent back home. 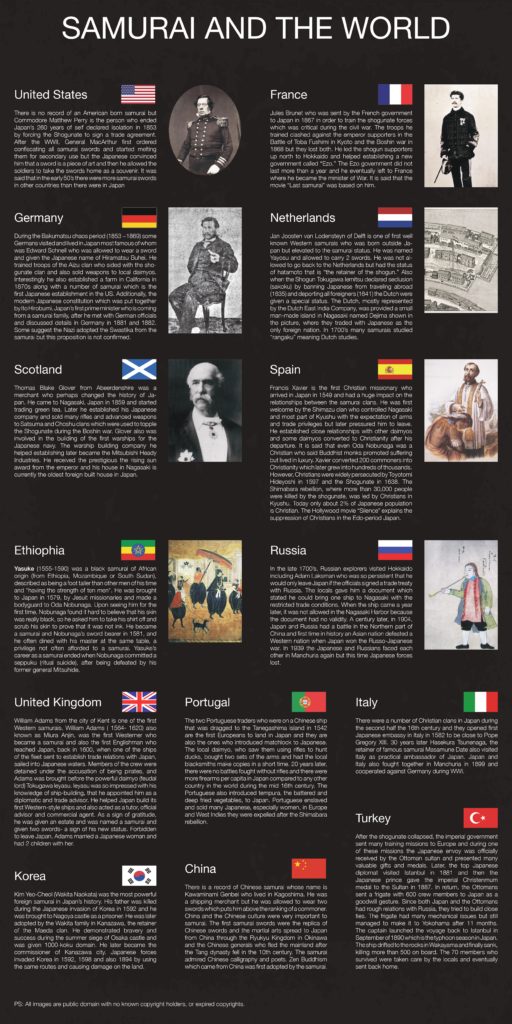