meaning “The Flower and Willow World,” is the collective name for the areas in which geisha and the traditional establishments where they entertain are located. All hanamachi belong to the karyūkai. Its name comes from the oiran and the geisha who once worked side by side in these areas.
The oiran was the opulent flower whose life was fleeting whereas the geisha is the willow whose bends to serve any customer and grows more sturdy with age.
Unlike the majority of Japan, it is women who run the karyūkai and all establishments found within it. It is a matriarchy that retains unbroken lines of succession by either producing blood heirs or adopting women, most often geisha, as daughters to take over the business.
Found within the karyūkai are the following enterprises: 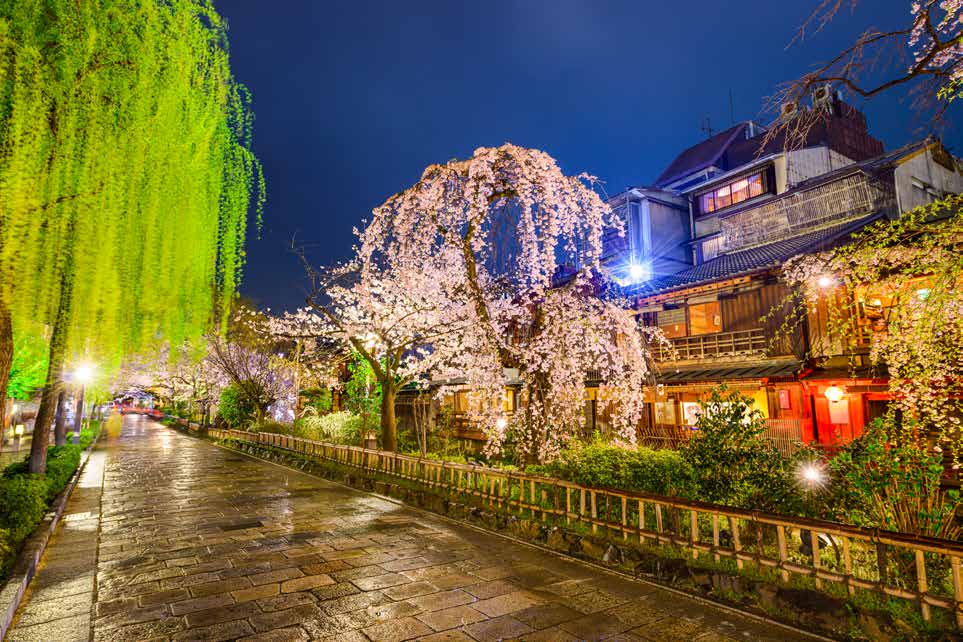 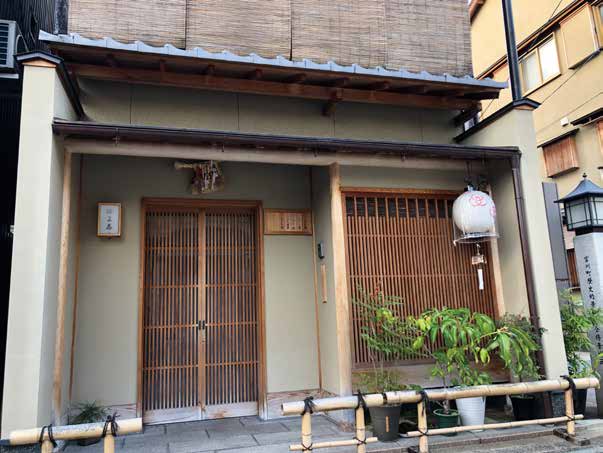 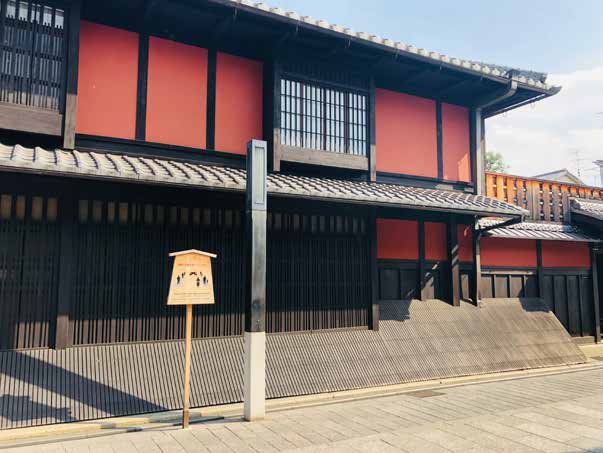 The lodging houses at which maiko and geisha live. They are run by a woman known as an Okaasan (お母さん), which means “Mother.” She will look after her charges as if they were her real daughters, which includes clothing them, feeding them, and keeping track of their engagements. She will also stand in for them should any dispute arise.

Tea houses at which geisha and maiko entertain. They are high class establishments that operate on the rule of Ichigen-san Okotowari (一見さんお断り), which means “No First Time Customers.” The ochaya began their lives as the snack houses located beside popular shrines and eventually grew into places that essentially function as high class party rooms. In order to be entertained at one you must be introduced by an established customer who can vouch for you. Parties with geisha and maiko, called Ozashiki (お座敷), are held in special rooms that are furnished with tables and chairs which guests can relax in while they watch dance performances and play drinking games to have a good time. Often times an ochaya will also have an okiya attached to it that is run by the same proprietress, which is a sign of how prosperous her business is and how well she is managing it. Most ochaya are over a century old and have been passed down from mother to daughter for generations. 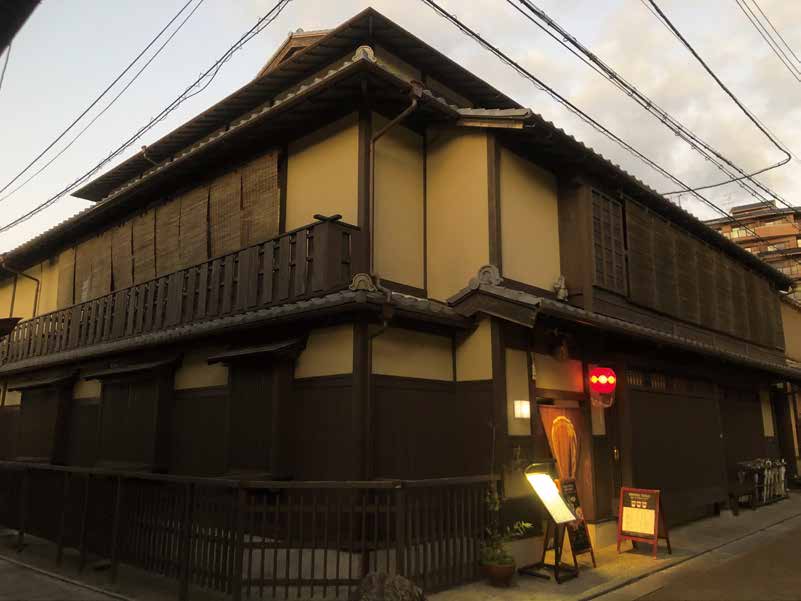 The umbrella term for restaurants that operate within each hanamachi. It’s quite common for customers to take their favourite maiko or geisha out to dinner with them at the finest establishments, known as Ryōtei (料亭), as a show of wealth. 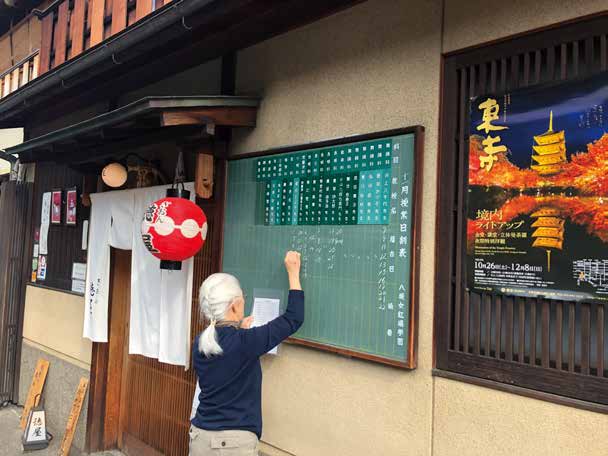 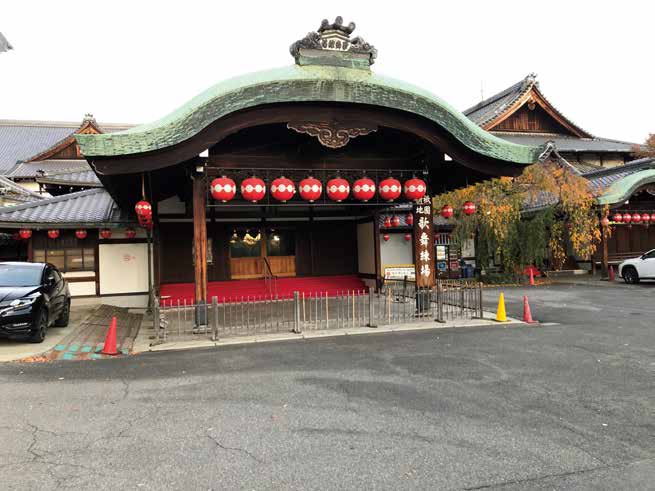 The office of the third party organization who looks after all engagements that geisha and maiko attend. They will go around to each ochaya every morning to collect the tallies for the previous night and then deliver them to the okiya of the geisha and maiko after sorting. If a discrepancy arises then the kenban will have a meeting with the ochaya and the okiya, although this is quite rare. At the beginning of January the numbers for the previous year are tallied up and those who worked the most hours are honoured during the New Year’s celebrations. In some districts it is also the job of a kenban officer to escort a geisha on her erikae or a maiko on her misedashi visits.

The large dance hall which each hanamachi uses to stage their yearly public performances in. Most have at least one balcony and seating for 200 people. These buildings also have rooms attached to them where geisha and maiko go each day to take their lessons in various art forms.

Teahouse is not literally a house of tea! A Japanese teahouse (ochaya お茶屋) is a business which holds the traditional banquets. It is not a place focused on serving tea, so the name might be misleading. In the past, these houses indeed served tea for the pilgrims, but the business transformed very quickly into a form known until today. Teahouses arrange kaiseki meals (catered from the local restaurants), geiko and maiko performances, parties, and meetings. Loyalty and secrecy are the most cherished values at the teahouses. Teahouses can be accessed only through an invitation of a long-term customer, as all of the guests have to be trusted and carefully selected. It’ s also very expensive to be entertained there, that’ s why these establishments are considered to be extremely luxurious and mysterious even for the locals. 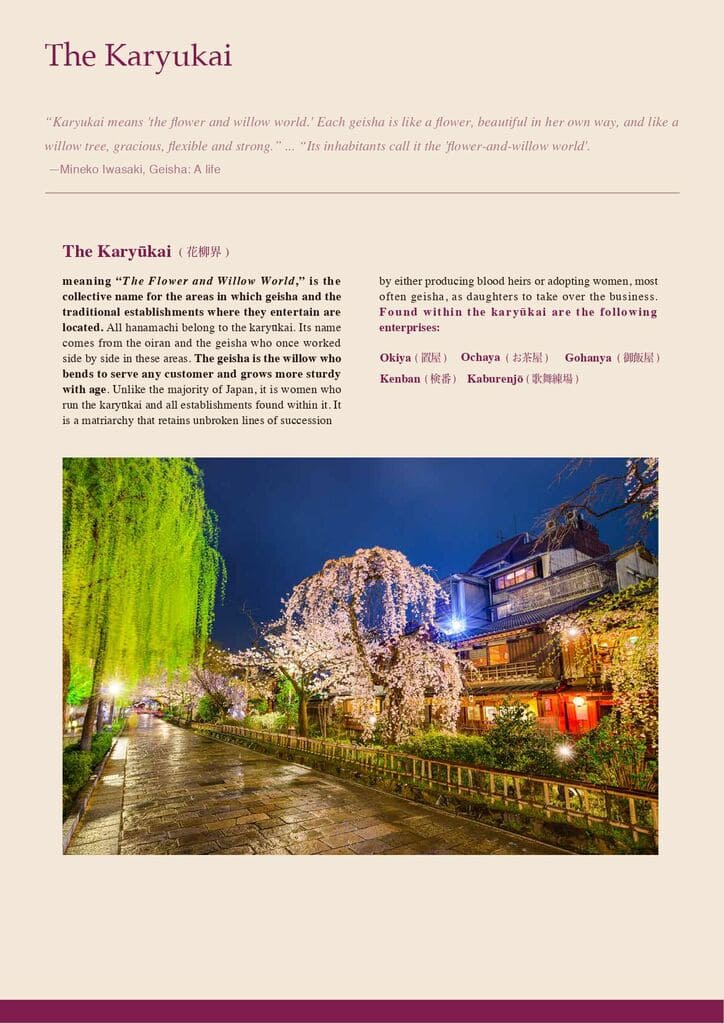 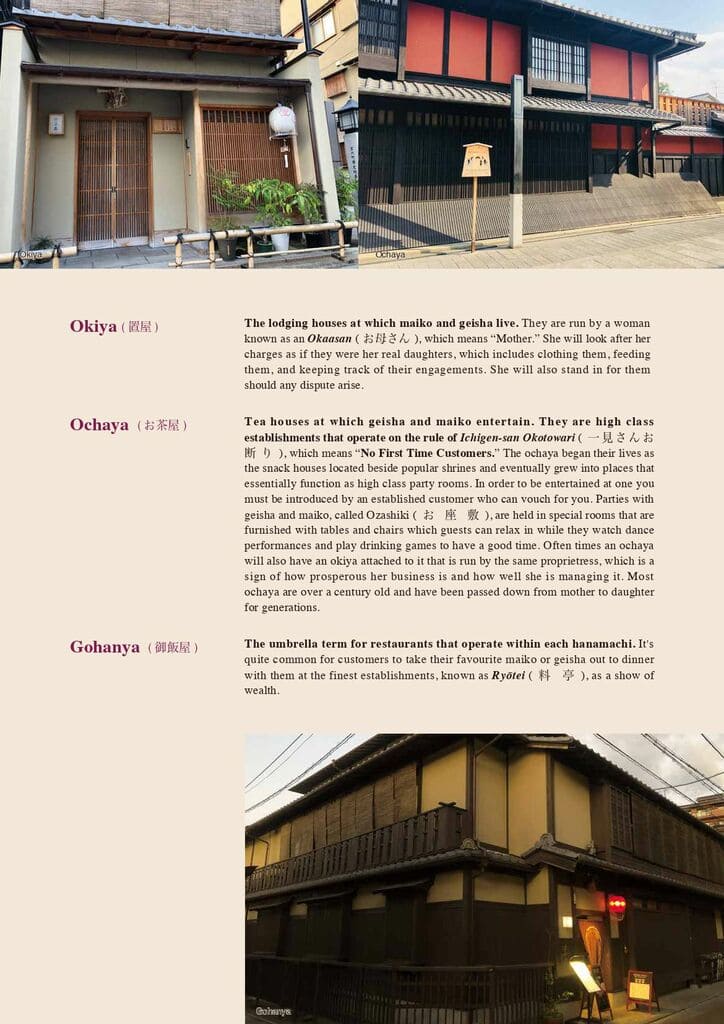 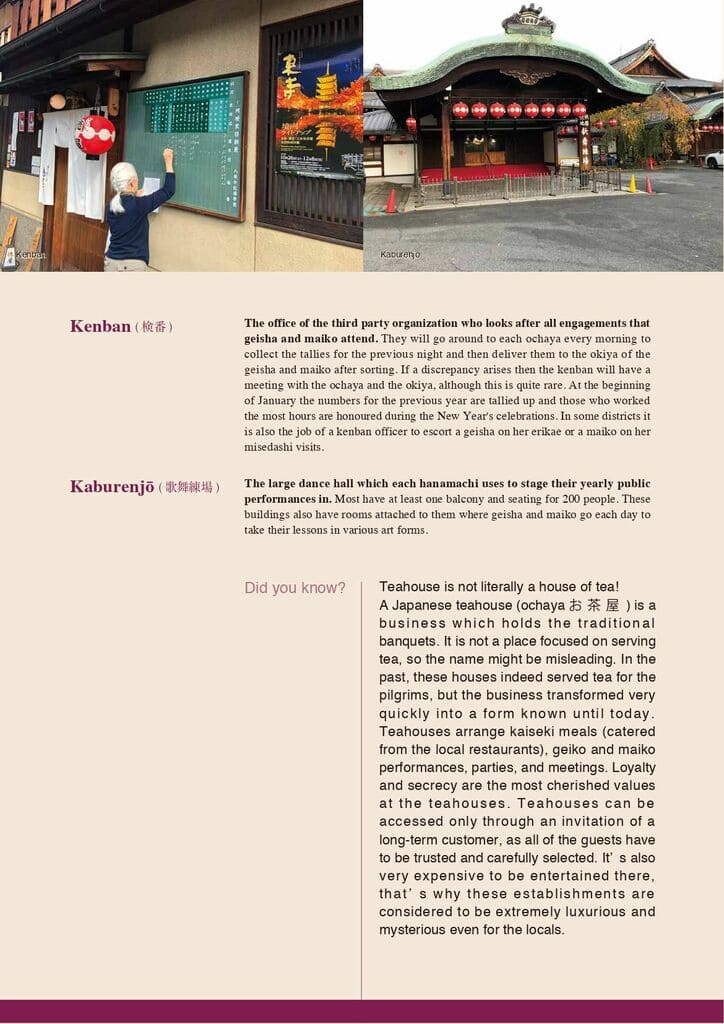