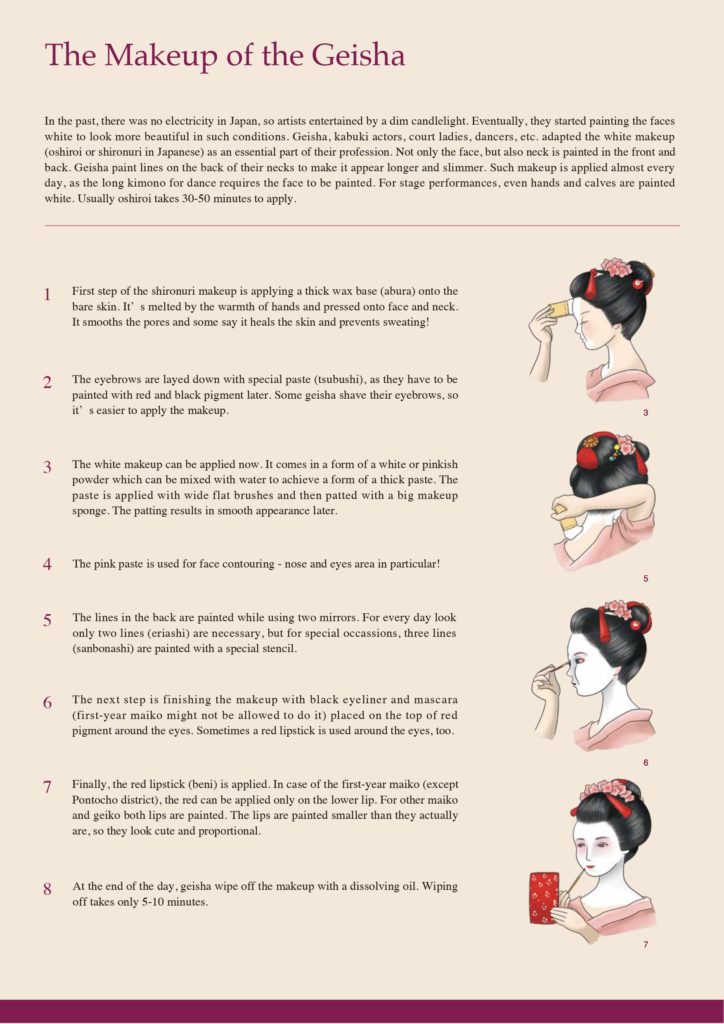 A brief history of Geisha Makeup

Charming Geisha represents one of the most iconic cultural images in Japan. The history of a geisha’s iconic makeup goes back to the Heian Period (794-1185) where nobility wore the white paste in front of the emperor so that their faces would stand out in the candlelight. During this period, the influence of Chinese culture included trends in beauty and practice. Geishas created a porcelain look for the purpose of showing their emotions clearly to the auditory.  This was especially important in the evening when faces need to be visible and recognizable. Today, modern Geishas and actors on stage still continue this practice, with all traditional aspects of classic Geishas appearance.

How to do a Geisha makeup

The first step that a geisha takes to putting on her makeup is melting a special wax called Abura (油) all over her face and neck. Geisha warm-up this wax in hands, because it needs to dissolves into an oily texture.  This ensures that all pores and crevices are filled in to give their skin a uniform texture. It also protects the skin from white paint.

The next step involves the most important part of a geisha’s makeup: the white foundation called Oshiroi (白粉). Meaning “White Powder,” it is carefully mixed with water in a small dish to form a paste. Then that paste is painted onto their faces and neck with special brushes called Hake (刷毛). They use two different sizes: one that’s the width of a hand for large swaths and another that’s a few fingers wide for details and small areas. These brushes are made from badger or goat hair and can last for a few years.

In a separate dish, she will mix some of the Oshiroi and add some pink powder called Tonoko (砥の粉) and contour parts of her face. This gives her a less overall pale look and provides a striking hint of blush when viewed up close.

Then she will paint two lines on the back of her neck called Eriashi (襟足), meaning “Neck Lines.” These two lines serve a dual purpose: the first is to give the impression that her makeup is like a mask, and the second is to leave a small bit of skin showing as traditionally the nape of a woman’s neck was considered sexy. During formal occasions, she will paint three lines instead of two called Sanbonashi (三本足), which means “Three Pointed Lines.”

After the Oshiroi has been applied, she will dab some white powder called Kona Oshiroi (粉白粉) all over to give her face a softer look. The pink that she previously applied will show through as the powder is extremely light.

Next comes the striking red called Beni (紅), meaning “Crimson.” It is applied with a small brush called a Beni Hake around the ends of the eyes, the eyebrows, and the lips. Unlike Western make-up, the Beni is used for multiple areas of the face, which is more akin to a paste than a lipstick. It’s dabbed onto the eyes for a soft effect but painted undiluted onto the lips to make them a bright red. The first-year maiko will only paint their bottom lip as a sign of their immaturity, while maiko from their second year onward and all geisha will paint both lips. They will paint their lips slightly smaller than their actual lips to make them look cute and more like flower petals.

Finally, black liner is added to the eyebrows and the eyelids to give them an undeniable sharpness and complete the look.