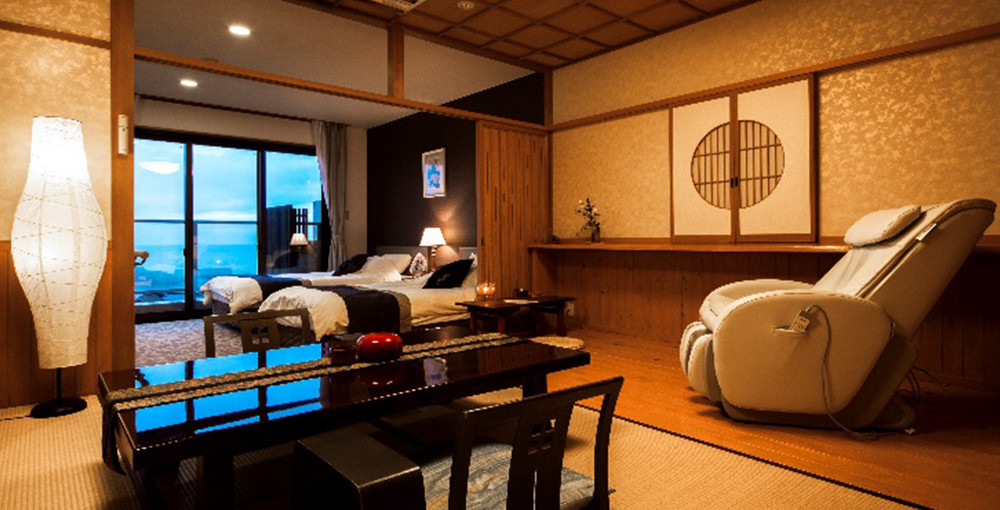 Kashoen Hanare Fuka is an accommodation located in Kyotango that overlooks the view of the ocean. Its interiors display traditional ryokan design while splashing touches of Western influence.

It has a total of 18 rooms that cost around 50,000 to 70,000 JPY per night, including a terrace, where guests can go out to feel the breeze, and open-air baths where they can unwind during their stay.

The hotel offers breakfast and dinner, providing guests with Japanese cuisine made with locally sourced ingredients. Their crab dish is mostly sought-after during the winter season.

The location of Kashoen Hanare Fuka is accessible from Osaka International Airport. Due to COVID-19, guests are advised to book under the guidelines implemented by the Government of Japan.

Known for the crab during the winter (November – March).

*All rooms have hot spring baths.

Is this place ryokan only or ryokan with an onsen?
Onsen Hotel

Does this ryokan have private onsen (hot spring)?
Yes

Is there a communal shared public bath?
Yes

Are there additional rental options?
With open-air tubs 1 With indoor tubs 0 With both indoor and outdoor tubs 0 Price 1,200 yen / 45 minutes How to book Reserve upon check-in

In or near
Kyoto

The price includes one dinner and one breakfast