A long time ago, many samurai were walking down the street in Kyoto. Many of the samurai’s historical events happened in Kyoto. The knowledgeable private guide will guide you to such must-see spots.
This tour is arranged by Kyoto Samurai & Ninja Museum. Kyoto’s samurai districts and ninja spots are listed below. Your tour guide will guide you 3 of the spots you pick after you make your reservation. 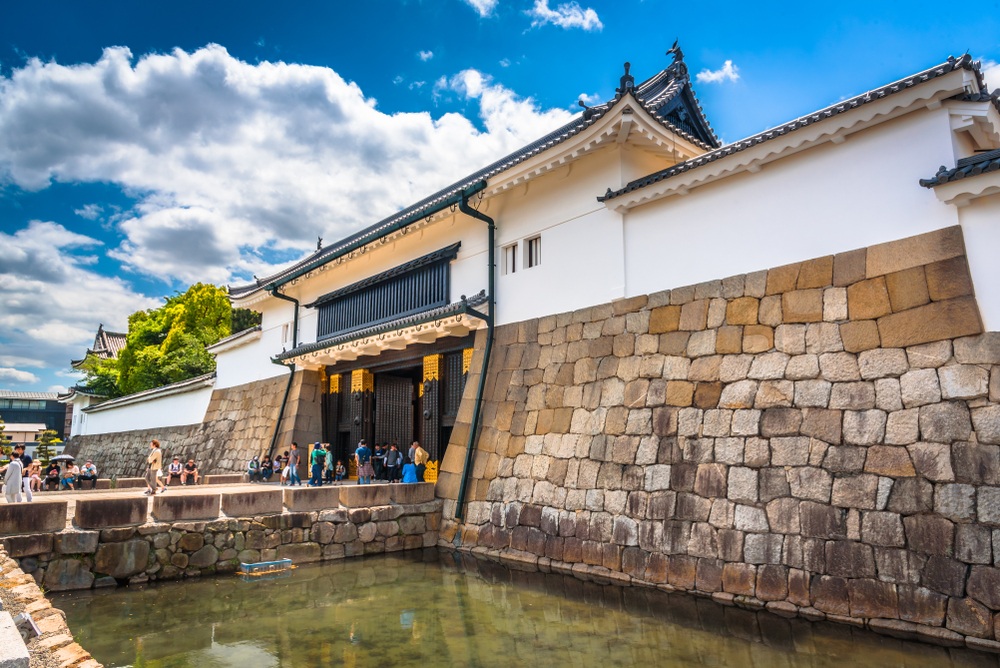 Today, Nijo Castle sits on 275,00 square meters of Kyoto’s Nakagyo Ward. Having survived fire, flood, and lightning strike, as well as modernizing updates and building additions from other historic locations, Nijo Castle nonetheless retains much of its historic, picturesque beauty from its days as the palace of the Tokugawa Shogunate. 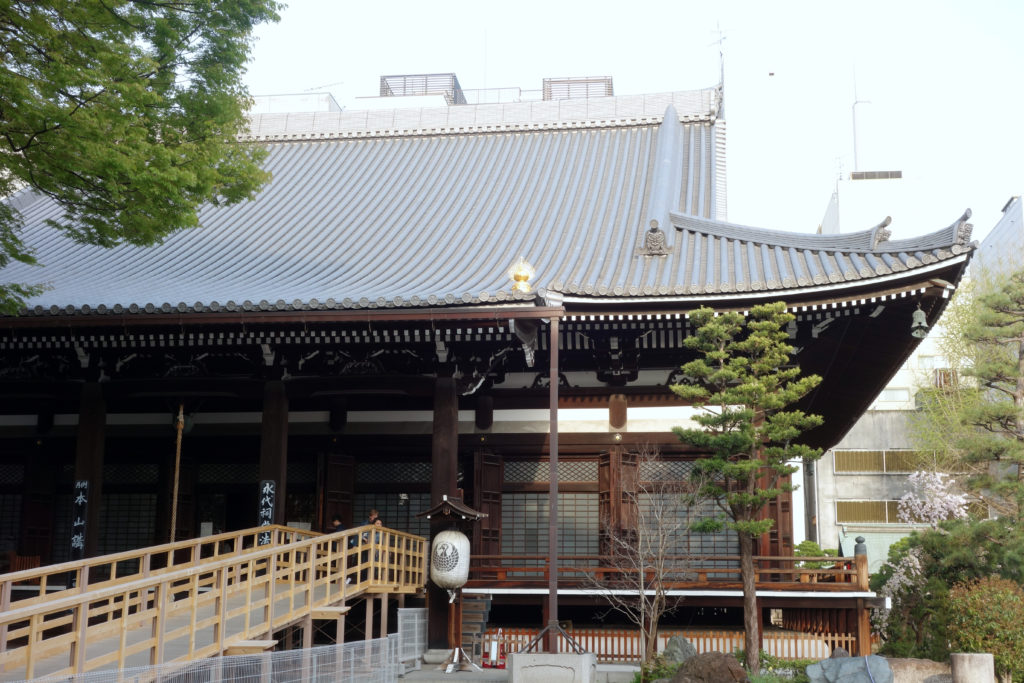 Today, Honno-ji sits near Kyoto Shinkyasho-mae Station, having been rebuilt several times following devastating fires. Its location in downtown Kyoto makes it an easy stopover for shoppers perusing Teramachi, or the Shijo shopping district. The small grounds are the site of several memorials, including one for Oda Nobunaga. For a small fee of 500 yen, guests can view items associated with the warlord, and pay their respects to a great figure in Japanese history themselves. 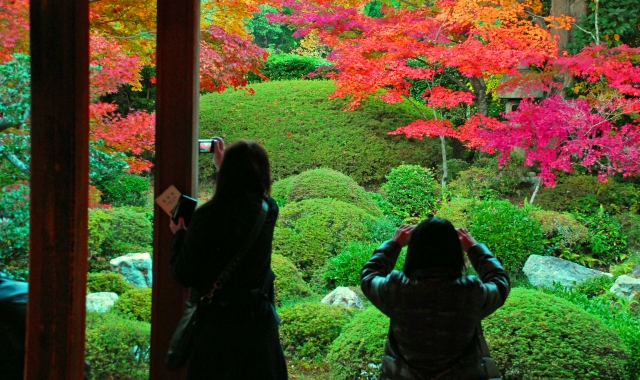 Genko-an was originally founded in 1346, however it has undergone significant renovations and restorations since then, and has a fresh, vibrant feel to it that is accentuated by its several wide terraces to the gardens outside. Two notable features at Genko-an are its round Window of Realization representing Zen maturity, completeness, and enlightenment, and the square Window of Delusion, representing confusion, ignorance , and samsara. The well-kept gardens are a delight to view at any time of year, showcasing Japan’s seasonal flora in all their spectacular beauty. Genko-an’s chitenjou can be viewed from the main hall. One can see footprints and handprints here in sobering clarity, reminding guests of the sacrifice of Mototada’s garrison that fell over four hundred years ago. 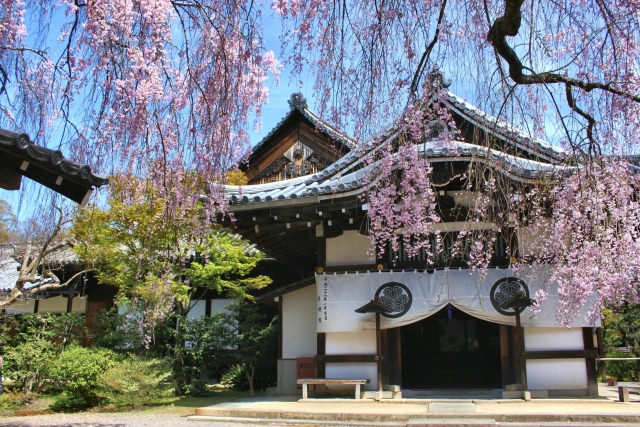 Yogen-in is a tiny temple first established in 1594. It was reconstructed with the floorboards of Fushimi Castle in 1621. Sitting behind the much larger Sanjuusangen-do temple, all Tokugawa shoguns starting from Hidetada are enshrined here. The temple offers guided tours in Japanese, and aside from the chitenjou–the blood ceiling– it is most famous for its decorative cedar sliding doors with depictions of Chinese lions, elephants, and kirin painted on them. Photography is not permitted in Yogen-in, and the dark interior gives it a somber, subdued atmosphere, suitable for the memorial it is intended to be. 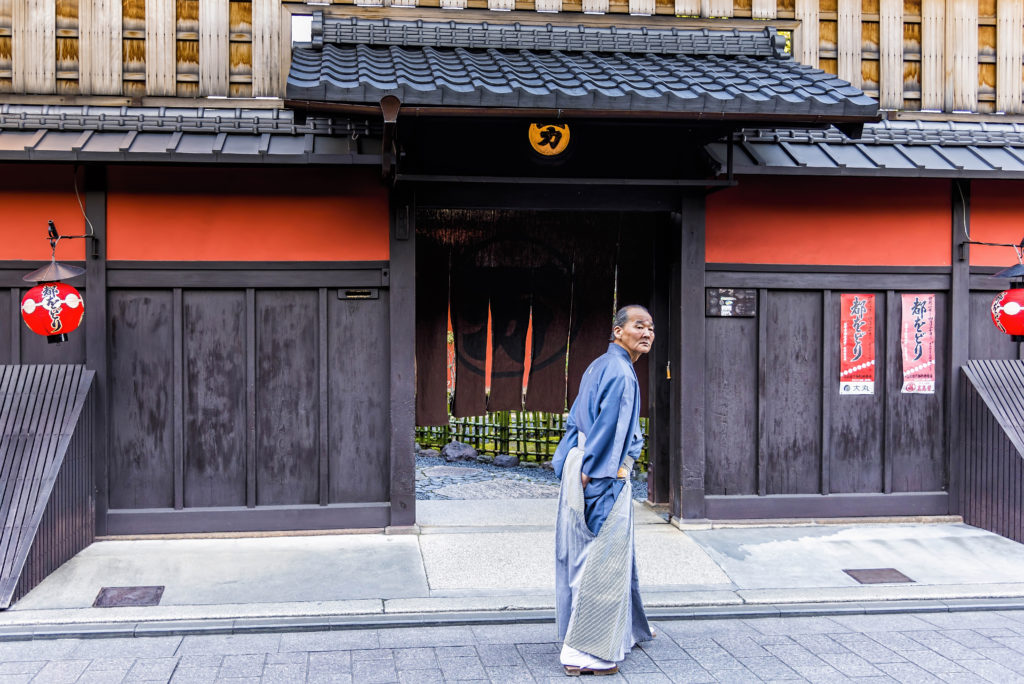 Ichiriki Chaya stands in the Gion district of Kyoto. Its access is extremely exclusive however, and guests must have close ties to the house already established before being permitted to enter. For a limited time in 2006, at the request of the Kyoto City Tourist Association, a small number of foreign guests were permitted to enter without being chaperoned by established patrons. Entertainment at Ichiriki can be as much as $8,000 USD per night, making the tea house both economically and socially closed to most visitors. 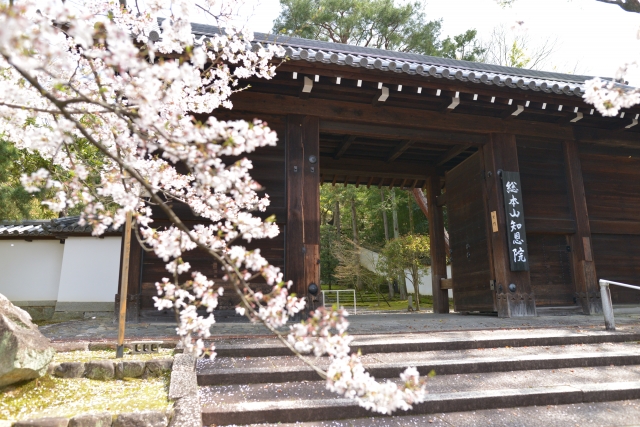 Located in Higashiyama-ku, Chion-in is a large temple complex dedicated to the Pure Land Buddhist sect. First established in 1234, it memorialized Honen, the founder of Pure Land Buddhism. Chion-in houses several features unique to Japan, or otherwise interesting in nature. Its Sanmon gate, constructed in 1619, is the largest still standing in the country. It is the site of the largest temple bell weighing 74 tons.

In the latter years of the Heian period, as the legend goes, an immense warrior monk named Benkei stood upon Gojo Ohashi Bridge, challenging any passing swordsman to a duel. It was his goal to collect one thousand swords this way, and with his great height and incredible strength, he had won nine hundred ninety-nine battles and taken his rival’s swords each time. 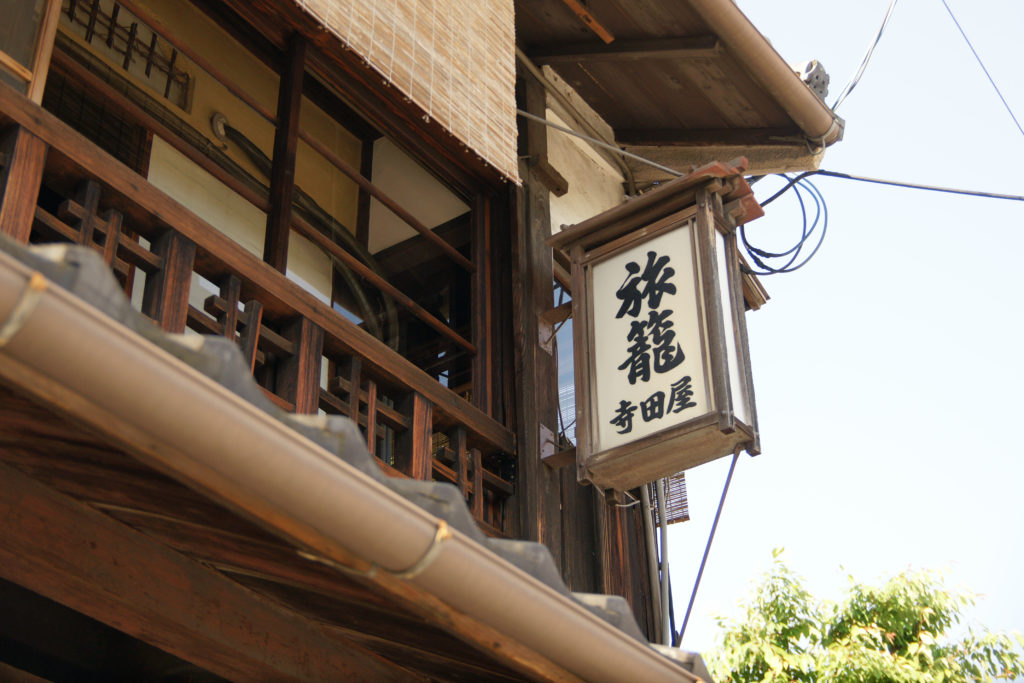 Today the Terada Inn sits in the southern Fushimi ward of Kyoto. Although the wooden structure has been reconstructed, it still bears the marks of Ryoma’s battle against the Bakufu patrolmen in bullet holes and sword cuts. The inn also features several bits of Ryoma memorabilia for interested guests to view, as well as the stunning traditional Japanese interior that so wonderfully preserves the atmosphere of old Japanese inns. 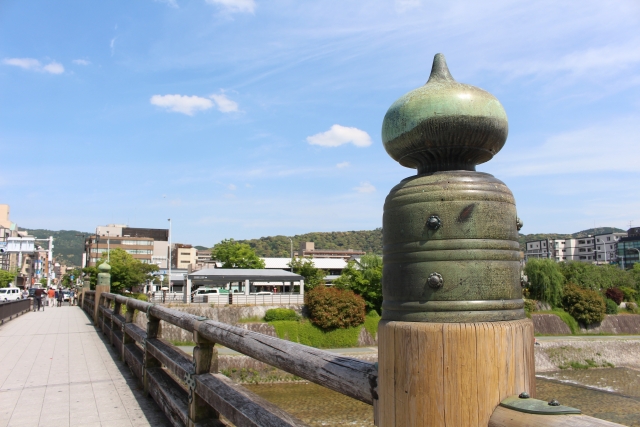 If you go to the Sanjo Bridge from the Sanjo Shopping Street side (Starbucks would be on your left) the 2nd pole on your right still has the scratches from the last fight between the Choshu clan samurai and the Shinsengumi fighters. There is no explanation in English so you can stop by the Kyoto Samurai and Ninja Museum which is 3 minutes from the bridge to learn more about the samurai.

Sanjo bridge is also special as you can still see the supports under the bridge that are about 400 years old. In the Spring and summer, many people sit by the river and some musicians perform near the bridge. You get a very unique small town feeling passing on the bridge in the early evening anytime of the year.

In the dying days of the Edo period, characterized by brutal conflicts between the Bakufu and pro-Imperial loyalists, Emperor Komei sought a peaceful reunification via an alliance between the Imperial Court and the Tokugawa Shogunate. The peaceful resolution to a centuries old conflict was an idealistic and overly ambitious goal for a nation weakened by factitious civil conflicts and pressed by foreign interests. In Kyoto, the Bakufu’s elite police force, the Shinsengumi, fought to contain numerous plots and treasons from bands of ronin acting out vengeful aggressions and assassinations. One such incident took place at the Ikedaya Inn. 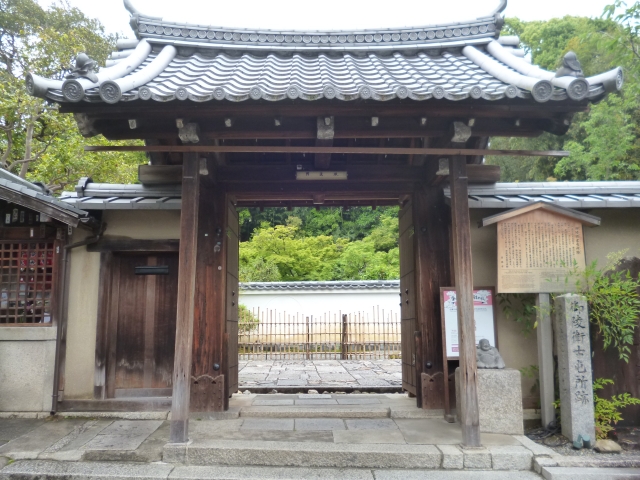 In 1867, Ito Kashitaro, a senior officer of the Shinsengumi broke off from the famous Kyoto Bakufu police force to form his own organization called The Guardians of the Imperial Tomb. This group withdrew to operate out of Gessin-In in southern Higashiyama. This new group was Imperialist in opposition to the Shinsengumi, and for their defection, they were hunted down and killed by the remaining Shinsengumi.
The exact details of the betrayal and the executions are unknown, however it is speculated that Saito Hajime, a captain of the Shinsengumi charged with routing out spies, was sent to infiltrate The Guardians of the Imperial Tomb. This however may be a conflation of his duties to ferret out spies within the Shinsengumi. Whether or not he was charged with spying on traitors is not within credible historical records. 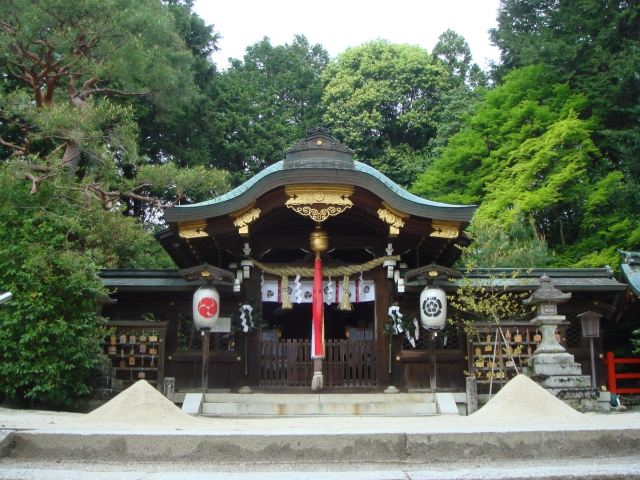 Hachidai Jinja sits in northern Kyoto’s Sakyo-ku ward, in the Ichijoji district. Its out of the way location scenically located at the base of a mountain with several other temples along the incline makes it a perfect destination for travelers looking to experience some of old Kyoto without the bustle of tourists. A piece of the Sagarimatsu, an ancient pine tree used as a waypoint for travellers in feudal Japan is preserved here. It was at this pine tree that Musashi defeated the Yoshioka school once and for all. Decedents of this pine are carefully cultivated near the original location, just down the street from Hachidai Jinja.

The Ryozen Museum of History is dedicated to the events and artifacts of the Bakumatsu–the end of the Bakufu period, which led to the Meiji Restoration. Located in the Gion district, the museum houses several artifacts from the period, as well as a gift shop selling Ryoma and Shinsengumi items. Unfortunately, the museum does not offer English descriptions of its displays. 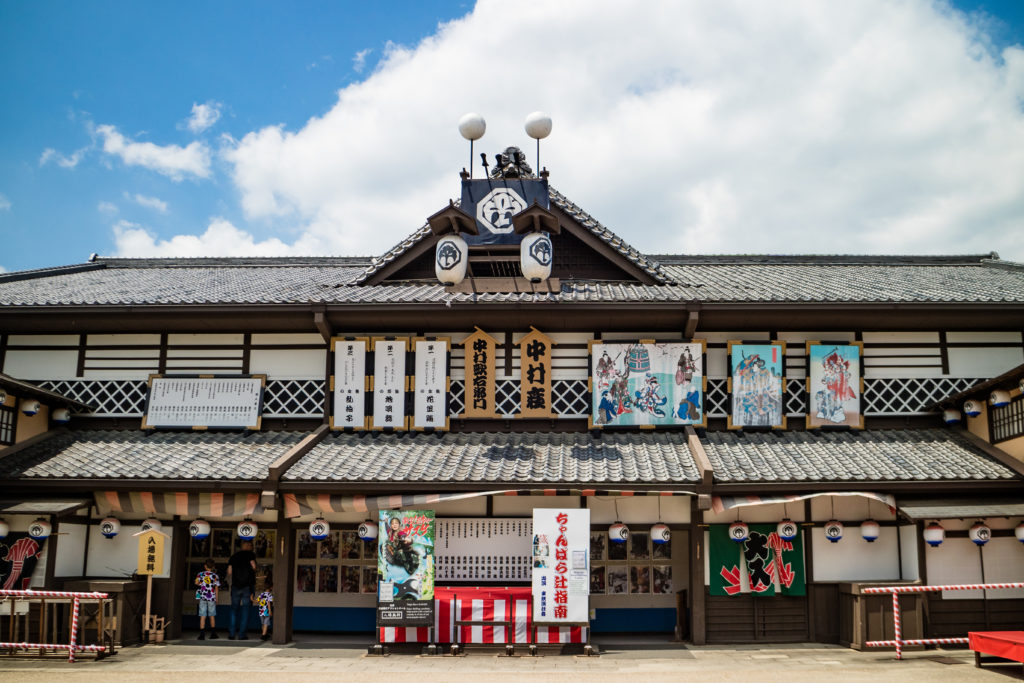 Toei Uzumasa Park, or Toei Kyoto Studio Park, is an active film location dedicated to period movies and dramas. Over two hundred films and shows are shot on the location, which has permanent set fixtures depicting Edo period landscapes and streets. The park offers visitors the chance to go back in history to experience what it might have been like to live in the Edo period by allowing guests to wander the set and dress up in period clothing. ( An admission ticket fee is required separately.)

The original Omiya Inn, the site of Ryoma’s assassination no longer exists. Its former location is marked by a memorial outside of a convenience store on Kawaramachi Dori, in downtown Kyoto.