The earliest known castles date from Yayoi Period (300 BC-300 AD). During the Sengoku Period ( The Warring States Period), as many as 25,000 castles were built. There are five national treasure castles that remain largely intact: Matsumoto Castle, Inuyama Castle, Hikone Castle, Himeji Castle, Matsue Castle. Many of Japanese castles were dismantled by the Meiji Government, after the ordinance which proclaimed that each fiefdom could have only one castle. Many castles were destroyed by lightnings, earthquakes, fires or at the end of the feudal age in 1868 because as the new government considered them anachronistic.

Unlike European castles, which are known for their opulence, Japanese castles were built mainly for defensive purposes, which is why their number peaked in the Sengoku (Warring States Period) in the 16th century. This is why Japanese castles are located mainly on hilltops, resulting in a unique style known as yamashiro (mountain castles). Different from European castles most castles tend to be somewhat similar white walls, pagoda style roofs, surrounded by moats having shachihoko on the roofs (a gold-color imaginary creature that has a body of a fish and head of a tiger). In the past only daimyos and noble samurais (bushi) were allowed to live in the castles. Ronins were not allowed to live in the castles.

When the Sengoku Period was over, the style changed, and Japan’s castles started being built in the plains, where they served as military and administrative headquarters. Because the defense was their main purpose, they were made up of three defensive rings: honmaru (main circle), ninomaru (second circle) and sannomaru (third circle). The main construction material for these castles was wood, but modern-day reconstructions are mainly in stone.

Japanese castles featured many tricks and traps. One of them was tonashi (no door), a smaller gate behind the main gate, leading into a small, closed and heavily defended area. Some castles also had channels which were used to drop stones and boiling water down on enemies, as well as openings for guns and arrows. Almost all Japanese castles had a moat not only to make it difficult to enter the castle but also make it impossible to dig tunnels to penetrate inside to castle. 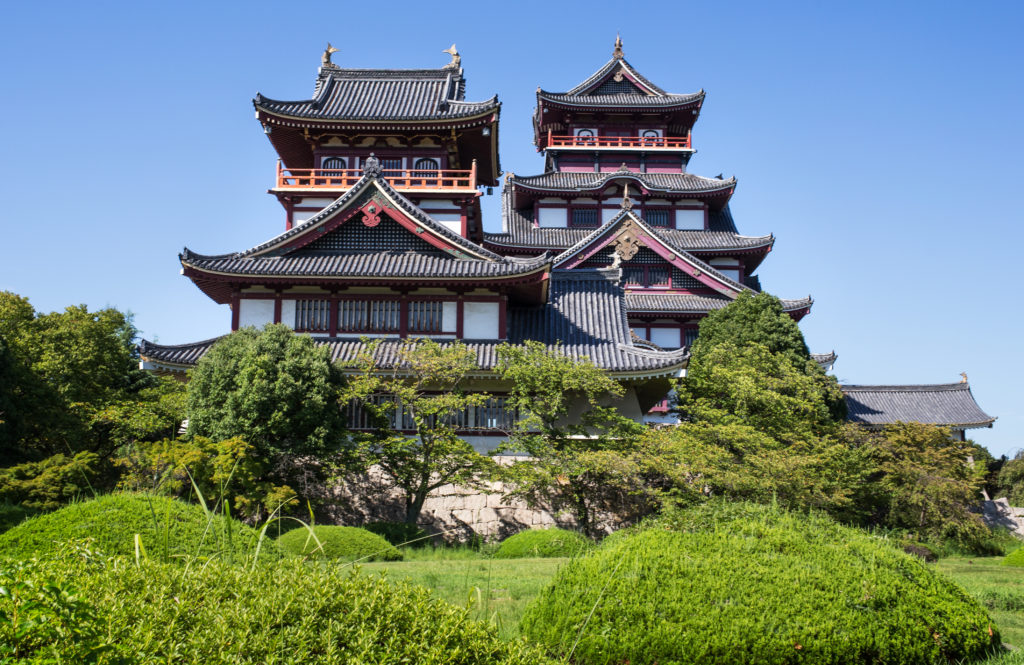 The building of the Fushimi Castle in Kyoto is a replica which was built as an amusement park in 1964. In 2003 the amusement park shut down and the castle is currently closed for visitors. Unlike many other Japanese castles, Fushimi was not built only for defensive purposes, but also as a retirement home for Hideyoshi. The castle was originally built for Toyotomi Hideyoshi during the 16th century and this is where Hideyoshi died in 1598. The castle is most famous for the defense of Mototada against the forces of Western army while they are advancing to the Battle of Sekigahara in 1600. During this defense it is reported that hundreds of Motoda’s men committed seppuku after he was killed. Ieyasu ordered the blood-stained castle floors to be distributed to 7 temples in the region. Two of those temples (Genko An and Yogen In) can be visited even today. Fushimi was destroyed during this eleven-day-siege in 1600. What remains of the castle today, was built in 1964 as “Castle Entertainment Park.” 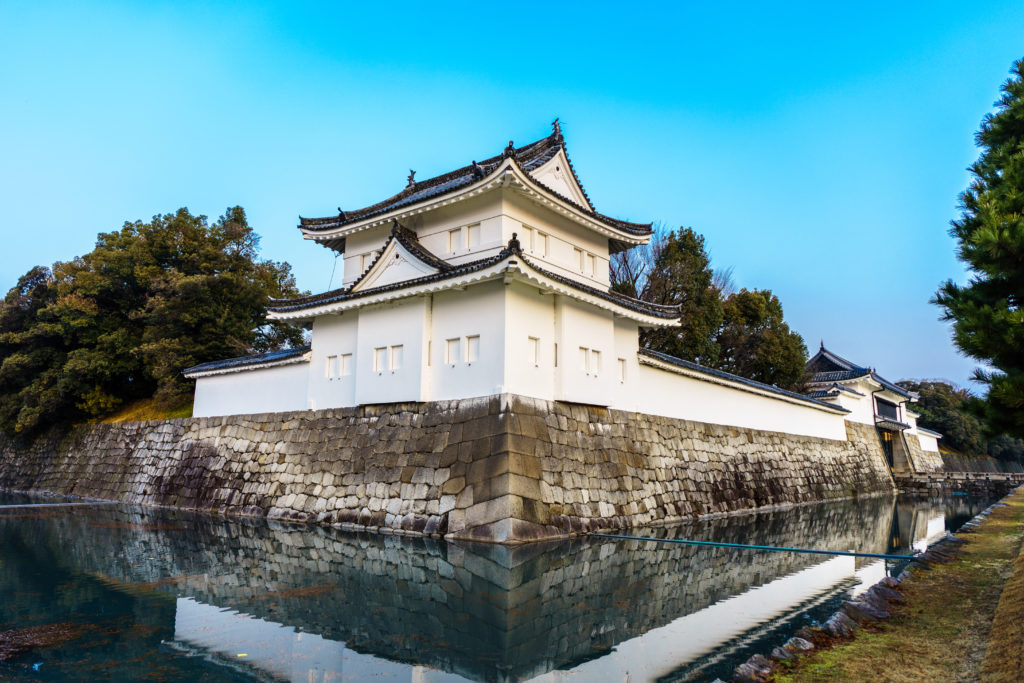 Nijo Castle construction started in 1603 after Tokugawa Ieyasu won the battle of Sekigahara and needed a resting place when he visited the emperor who lived in Kyoto. Nijo castle is famous as a place where the Edo period started (1603) and ended as the last shogun Yoshinobu Tokugawa declared in the main hall of this castle that he was giving up the power to the young emperor Meiji (1867). The castle is renowned by its nightingale floors, the floors that squeak and make the chirping noise whenever someone steps on them. These floors were made to hear the ninjas who may raid the castle in the middle of the night when people are sleeping. The castle is quite different from other castles in Japan (it does not have a big keep or many floors with large pagoda-style roofs as it was built in the peaceful period.) The castle also has original paintings on the screens that are more than 300 years old. 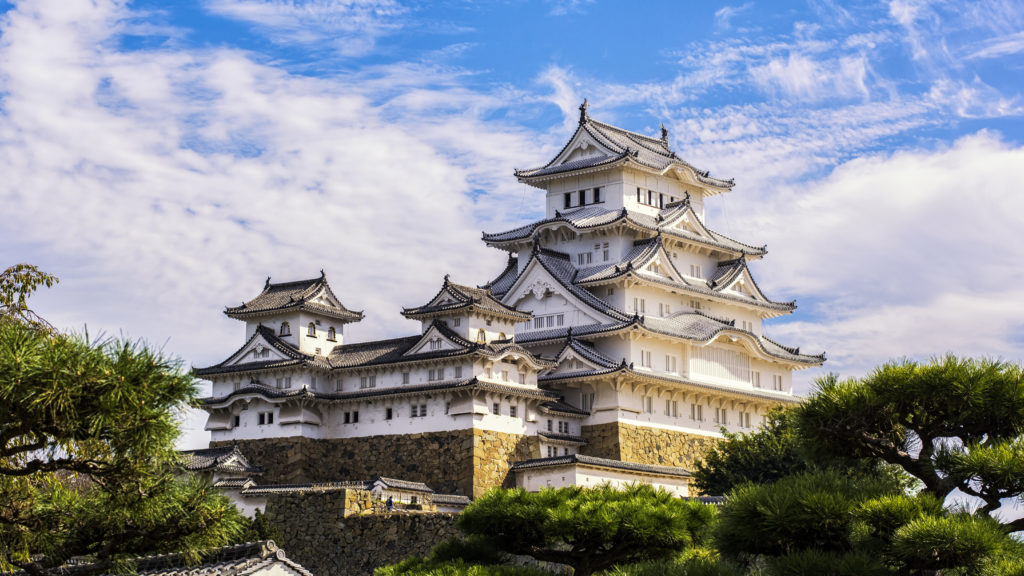 The most visited Japanese castle in the world. Also known as White Heron Castle and located on a hilltop in the city of Himeji, near Kobe, Himeji Castle was completed in the 17th century. It is considered to be one of the most beautiful castles in Japan and is a popular cherry blossom spot. It is a UNESCO world heritage site, and one of Japan’s twelve original castles, having never been damaged by war or natural disasters. Himeji is a fine example of Japan’s castle architecture, as it is made up of 83 buildings, multiple gates, wing buildings and winding paths. It has tricky swirling paths that go to the keep which makes it easy to stop the enemy. Himeji Castle appeared in James Bond’s movie “You only live twice,” two of Akiro Kurosawa’s movies and multiple video games. 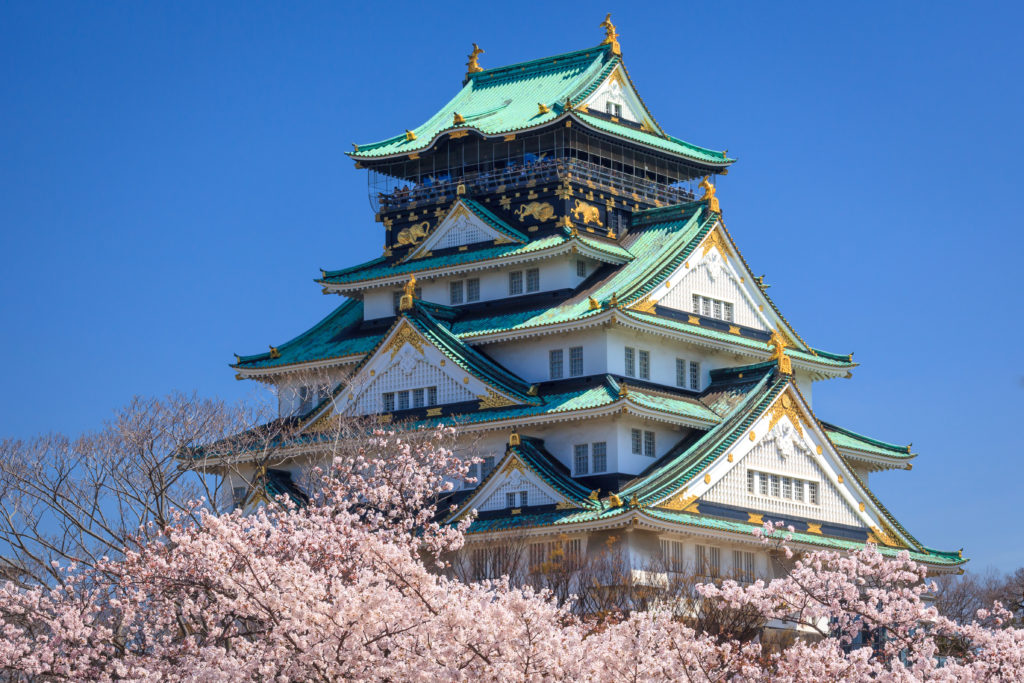 It was built in 1597 1 year before the legendary Sengoku warrior died. It was sieged by Ieyasu in the winter of 1614 but Yukimura Canada successfully defended the castle with 6000 men vs. the 30,000 strong Takugawa army. During the summer of 1615 this tie Osaka castle fell and burned completely. It was rebuilt but demolished in 1868 again. Later during WWII it was completely bombed by the allied forces as the Japanese army used the castle to train the army and hide the arsenal. On the wall stones the traces of the bombing can still be seen. After the war, Osakans collected millions of dollars and eventually built the current replica. There is an elevator which surprise many foreign visitors. It is an eight-storey building, made up of numerous citadels, gates, stone walls and moats. Its famous site is a museum devoted to Toyotomi Hideyoshi, the shogun who unified Japan. 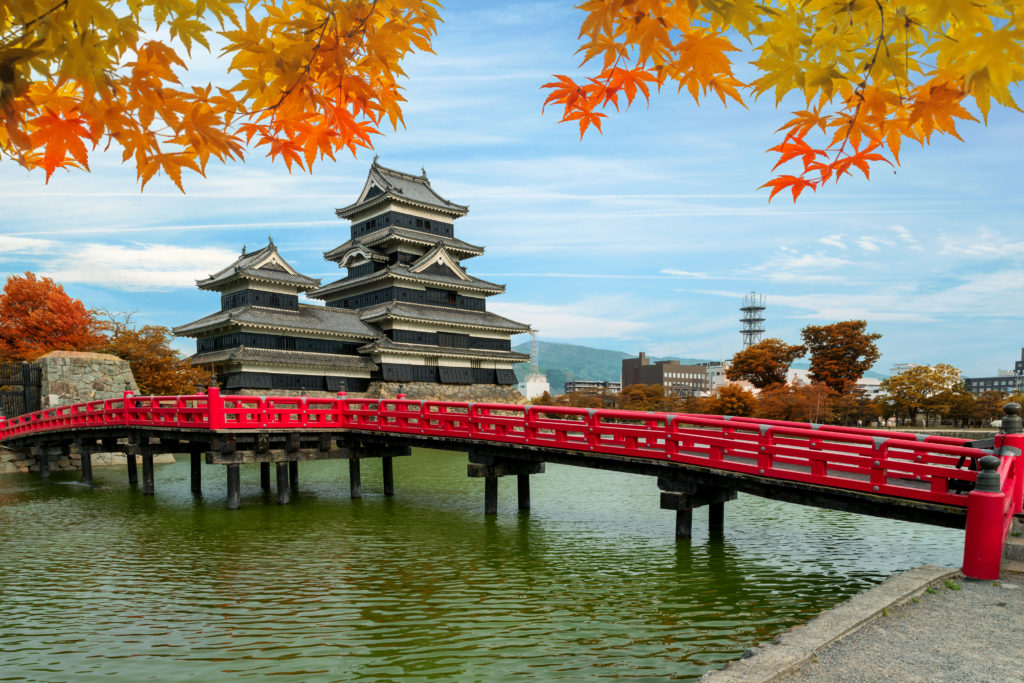 One of the rare Japanese castles not located on a hilltop, Matsumoto Castle is one of the most beautiful among Japan’s 12 original castles. It is known for its decorative turrets, a secondary donjon (castle keep) adjoined to its main keep and a red-lacquer bridge. Matsumoto Castle is also distinguished by its wooden interior and steep wooden stairs. Motsumoto castle looks like 5 stories from the outside but this is just to trick the enemy, there is a hidden floor which makes it a 6-floor building. 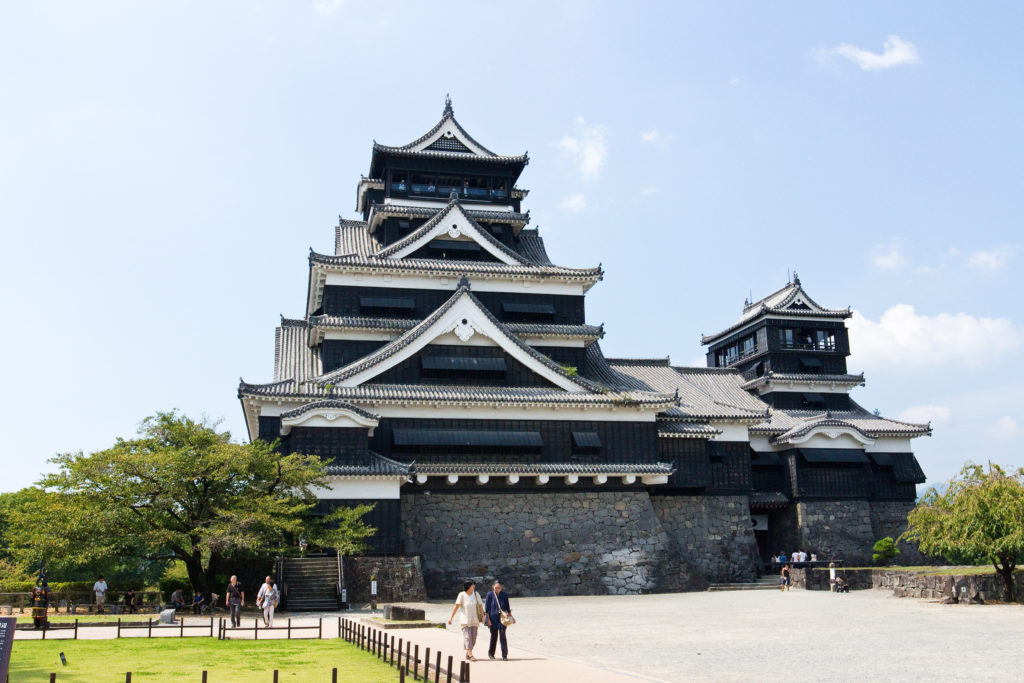 Kumamoto Castle was constructed in the 17th century, but what can be seen today are mainly modern-day reconstructions, albeit very authentic and true to original appearance. Unfortunately, the castle suffered serious damage in the earthquakes of 2016, with its walls crumbling and many of its structures falling down. It is made up of two towers, and its main attraction is Honmaru Goten Palace in which the daimyo (feudal lords) used to receive their guests. Kumamoto is also known for its formidable defensive system with stone walls and moats. 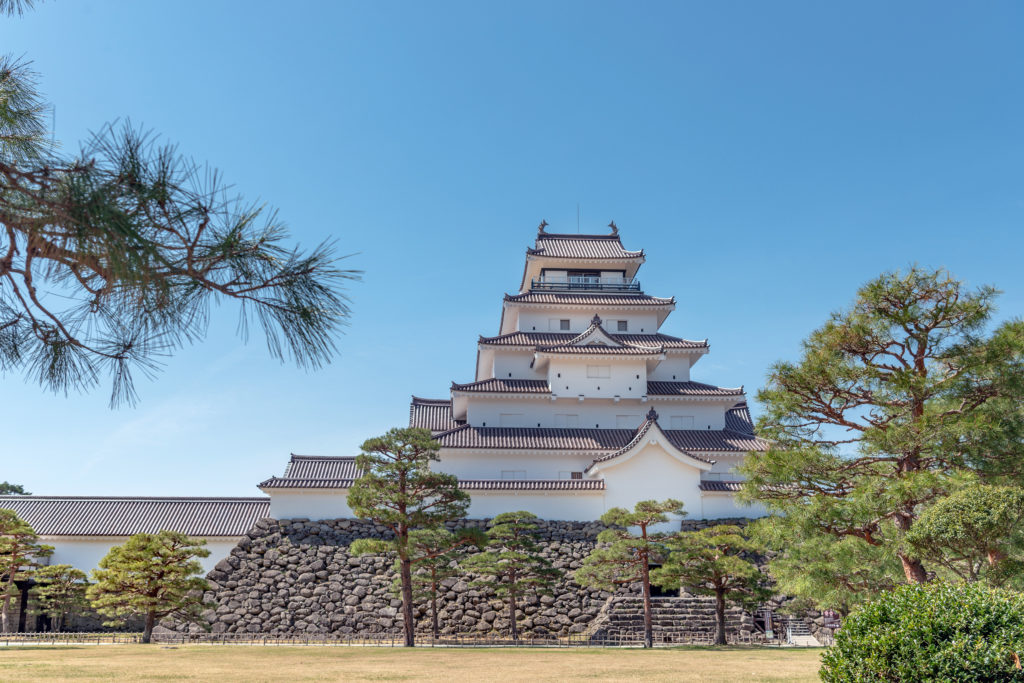 This is the last castle that witnessed the modern-day fight of samurai. Also known as Tsuruga Castle, it was built in the 14th century, and destroyed during the 19th century Boshin War (1868), a rebellion against the Meiji government, because it was one of the few remaining strongholds of samurai who fought for the Tokugawa shogunate. The castle’s concrete reconstruction was built in the 1960s. It is distinguished among other Japanese castles by the red color of its roof tiles. It is surrounded by Tsuruga Castle Park with lawns and cherry trees and Rinkaku Teahouse which was used for the tea ceremony. 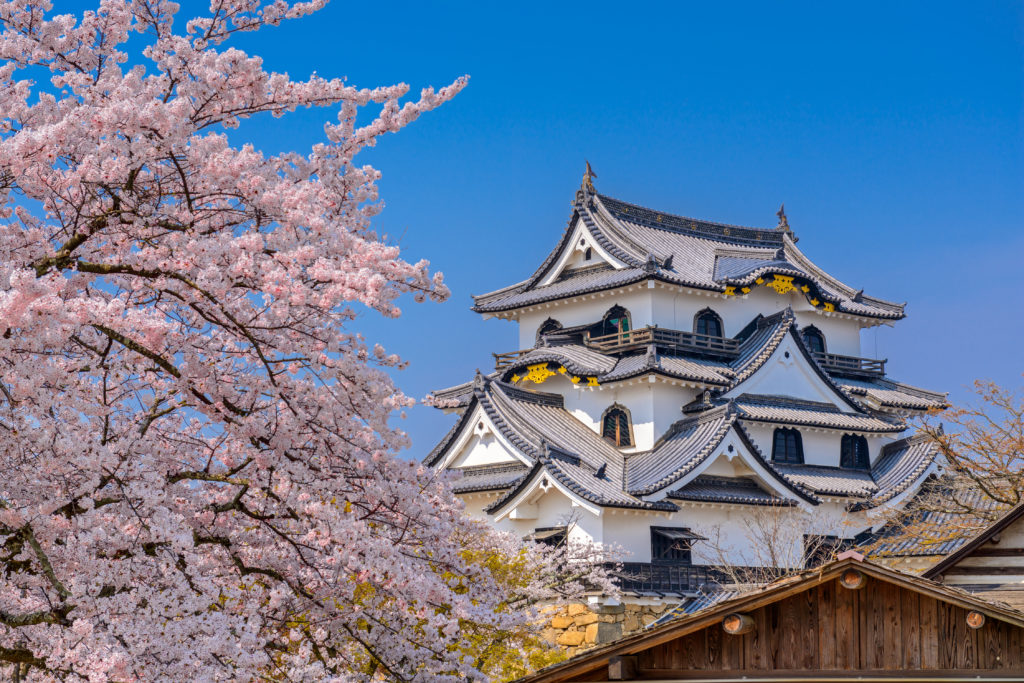 This is one of the smallest castles in Japan. Located at the shores of lake Biwa, Hikone Castle was completed in the 17th century and is one of Japan’s original castles, remaining largely intact. It is famous for its three- storied castle keep, which is not large, but combines multiple architectural styles. The castle is one of Japan’s national treasures. Its famous site is Genkyuen Garden, with a pond and a circular walking trail. The castle is very popular during the sakura season. 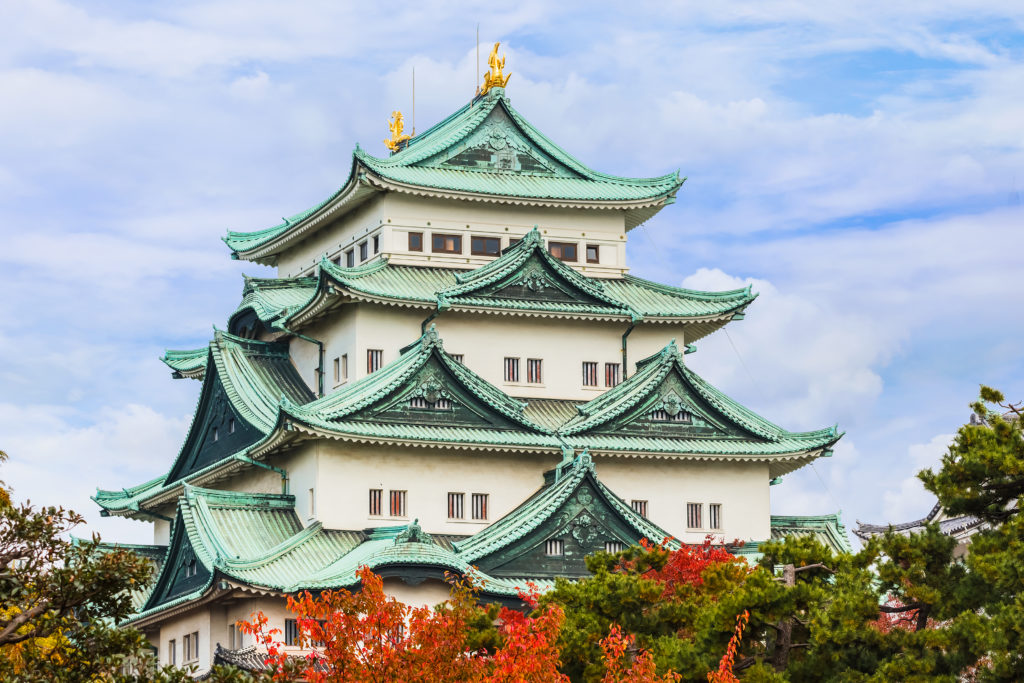 Nagoya Castle was built during the Edo period by Tokugawa family and it served as one of their three seats. Many of the castle’s buildings were destroyed during the Second World War, so it was reconstructed in 1959. Outside the castle, there is an over 600 years old Torreya Nut Tree, which is the only government-designated natural monument in Nagoya. Nagoya Castle is also famous for its shachihoko, an animal-statue with the head of a tiger and the body of a carp, located on the top of its roof. 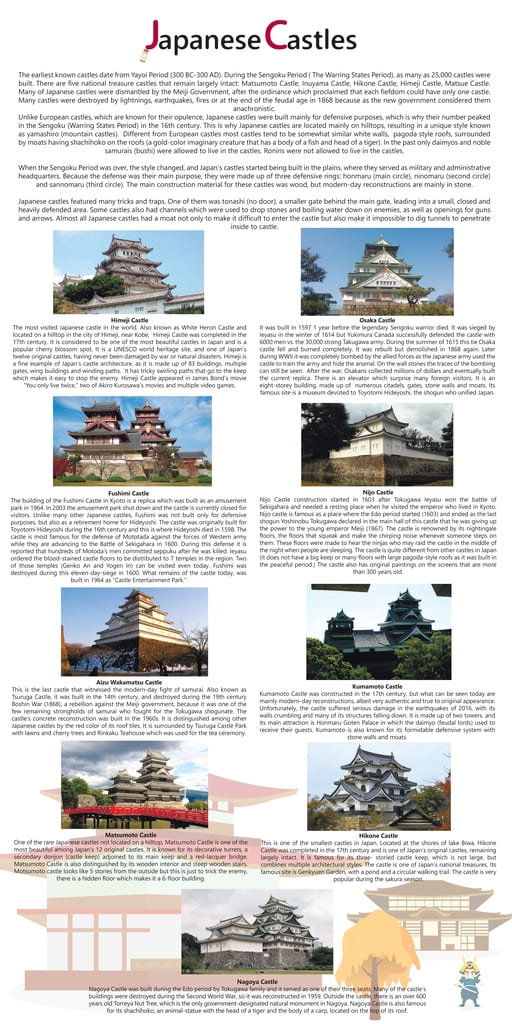 "Japanese castles (城 shiro) were fortresses constructed primarily of wood and stone. They evolved from the wooden stockades of earlier centuries and came into their best-known form in the 16th cent