– Kimono means thing (mono) to wear (kiru). Kimono first emerged as an under garment for the Japanese aristocrats during the Heian period. Back then the court nobles used to wear kimono-like outfits that had a total of 12 layers. Later it became a formal wear. During the Edo period commoners were punished if they wore more stylish kimonos than the noble samurai. When you are wearing a kimono, you are practicing a 1000 year-old tradition. In most countries, traditional clothes are only worn during festivals and parades, but in Japan, it is normal to wear a kimono during social gatherings (marriage, tea ceremony, graduation party, meeting with friends at a teahouse, etc.).
– The kimono patterns and motifs have symbolic meanings mostly related to seasons. For instance pine, chrysanthemum and bamboo branches represent winter while cherry blossom and plum flower represent spring. Monthly festivals and new year celebrations can also easily be found on kimono decorations.

– Besides marking the seasons, kimono motifs also have other symbolic meanings such as cranes and hexagons: longevity; wisteria flower and peacock: love; hand fan: wedding; taiko drums: fun, paulownia flower: femininity; overlapping circles: 7 jewels of buddhism; connected diamonds, dimond-stars: the hemp leave that grows fast which is often used for children’s kimono. The crane is often used in wedding kimonos since it represents longevity, good fortune and loyalty. The loyalty comes from the fact that cranes are monogamous animals. Chrysanthemum is perhaps the most common flower as it also symbolizes the imperial family.

– Historically, all kimonos for adults came in only one size. Since people have different heights, it is not easy to put on a kimono.

– Most young Japanese women today cannot wear a standard kimono by themselves because it requires as certain amount of training and practice. Wearing a summer kimono (yukata), which is found in all ryokans and hot springs is rather easy, all Japanese can do it.

– While the Western clothing usually shows the appeal of women by emphasizing the curvy lines, the kimono does the opposite. It shows the body straight, which is more suitable for the body type of Japanese women. The inner-wear stuffing is used to show the body more cylinder-like.
– When wearing the kimono over the chest, the left side should always be on top (right side worn first). In Japan, only those who passed aware are wrapped in kimono where the right side is on top.

– Women should not wear the sash ribbon in front. Historically, only the courtesans used to tie their sash from the front.

– Most young girls you see on the streets of Kyoto wearing the kimono are usually domestic travelers from Osaka or Tokyo who are visiting Kyoto since Kyoto. In other Japanese cities, it is rare for youngsters’ to wear a kimono on the street except the graduation ceremony and the coming of age day.

– Men’s kimono tend to have simple dark colors with no motifs, comes with a black and white patterned small sash which is put in a way that shows the big belly. Bigger belly means the man has higher social status.

– Women’s kimono tend to be more colorful, have a big sash and feature flower motifs.

– Kimonos have long sleeves for wind to pass by. This makes the wearer feel comfortable and also looks more appealing.

– Kimonos are made by standard fabric that is 36 cm wide which is very impractical (4-5 pieces should always be sewed to make a T shape) – Maiko (training geisha) dress can weigh more than 10 kg. It has many layers of inner garment to show the chest flat, that gives the image that the girl is “pure”.

– Yukata is a type of kimono that is made out of cotton as a summer wear. Its design is more casual and it does not require inner wear.

– The sash (obi) can be tied in the back in dozens of different ways. Each way has a different meaning. Apprentice geisha has long sash and mature geishas have short sash.

– Most young women with powdered white face you see on the streets during the day time tend to be travelers from Asia who dress up as an apprentice geisha. Real apprentice geisha (maiko) usually do not walk outside as groups, walk fast, have real hair instead of wig, have only bottom lip painted and always carry seasonal flowers and seasonal motifs on their outfit. Real geishas also usually do not wear all-red kimono designs.

– In Japan married and single women should wear different kimonos. You can understand if someone is married or single from the kimono.

Do the Japanese wear kimonos?

A typical Japanese person would wear a kimono during social ceremonies such as the graduation ceremony, a wedding party, or a Tea ceremony. Wearing a kimono is also normal in cultural activities such as flower arrangement, buyou dance, and kabuki watching. Yukatas are worn by young people when they watch the summer fireworks. You rarely see a Japanese person wearing a kimono in downtown Tokyo. However, in Kyoto, many locals and domestic tourists put on a kimono especially when they visit historic neighborhoods, temples, and shrines.

What is the difference between kimono and yukata?

Why do kimonos have big sleeves?

In the past, only children’s kimonos had big sleeves and the reason was to let the wind blow through and create a cooler feeling. Later it became a norm. Also, it is believed that dancers who wear long-sleeve kimonos look more elegant and the long waving sleeves keep the evil spirits away. Yukata, tomes ode, and male kimonos tend to have shorter sleeves. Chefs and housewives usually put on a piece of fabric to prevent the sleeves from hanging so they can move easily.

What is the purpose of the kimono?

The purpose of kimono is to cover the body in a formal way that has been preserved for more than 1000 years. Kimonos traditionally come only in one size and it is difficult to learn how to put one on. If the Japanese wanted, they could have added buttons to kimonos, but they did not, just to preserve their tradition. Ki-mono means things to wear in Japanese and when it first emerged the kimono was an undergarment for the Japanese aristocrats.

What is a geisha kimono?

Where can I see a real geisha in Kyoto?

You can spot many real geishas on Hanamikoji street between 5:45 pm and 6:45 pm during their walk from their residence to teahouses. You can also spot some geishas outside the Gion Corner after when they are leaving their dance performance at 7:45 pm. You can walk to the Gion area from here in 10-15 minutes. You are more likely to see geishas on Friday and Saturday evenings. It is a bit expensive but you can also reserve a geisha dinner show at Maikoya. 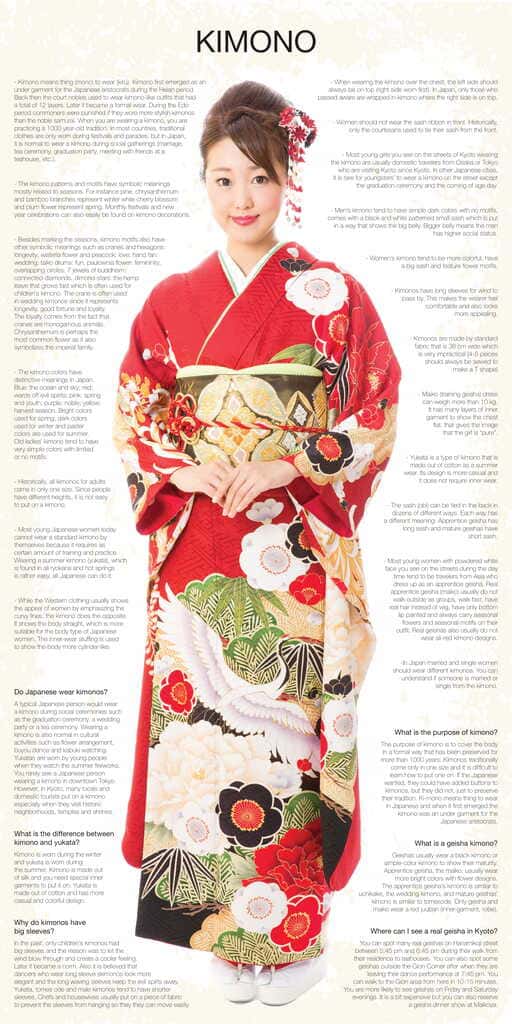 Quick And Interesting Facts About Kimonos

Ever daydreamed of wearing a fashionable traditional kimono while strolling the historic streets of Kyoto? Planning on wearing one for your Kyoto vacation? Before you book a Kyoto kimono rental, there are a few quick and interesting facts that you should know about this traditional Japanese garment.

Don’t know where to go to Kyoto to go for a fabulous kimono photoshoot? Dreaming of a memorable kimono experience in Kyoto, Japan? Then, make sure to check out these suggestions. After the inspirations, you can decide where to get your kimono for rent in Kyoto. Go back to Kimono rental pla

When it comes to kimono they are ranked informality based on the material used and the placement of the designs. In total there are six different ranks of kimono, including: -Yukata (浴衣): The lowest rank of all. Meaning “Bath Robe,” it was originally used for guests at bathhouses due to i