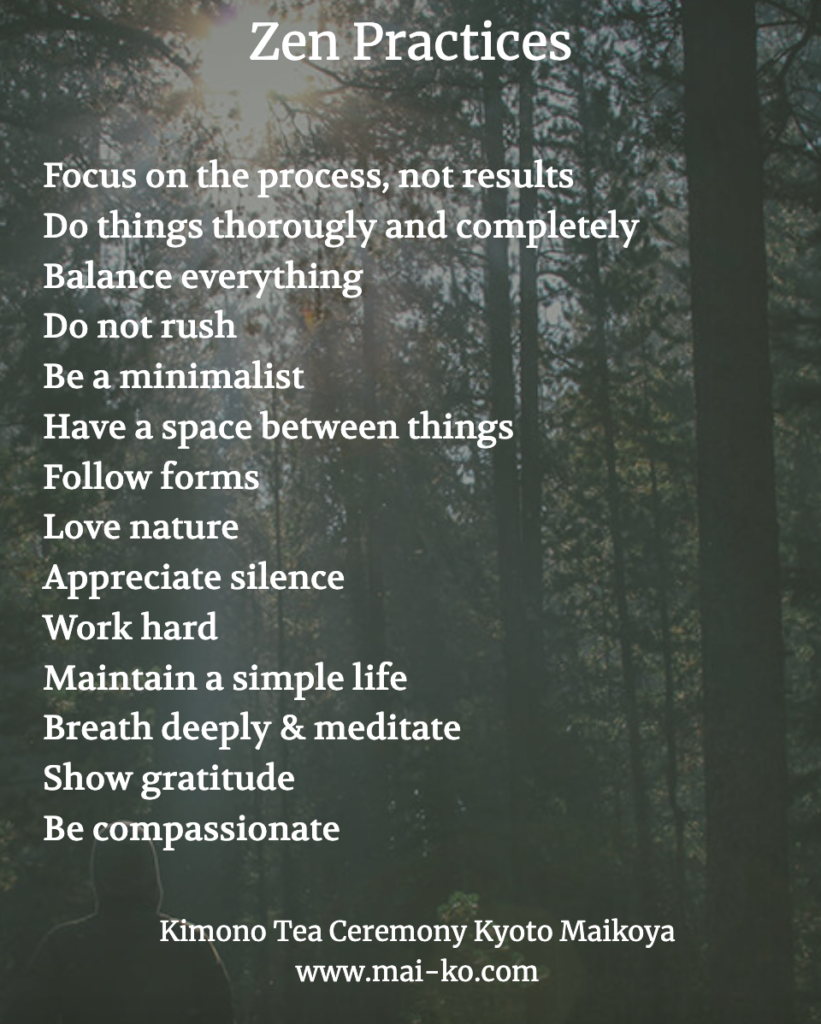 Zen practices are born out of centuries-old monastery lifestyles of Zen monks on Japanese mountains. The practices include but not limited to focusing on processes rather than results, being a minimalist, doing one thing at a time, valuing silence, and seeking harmony in nature rather than controlling nature. These are the practices and common behaviors of zen followers, if you’d like to read about the zen rules and values please click here.

Focus on processes not results

There are several reasons why people who practice zen are indifferent towards the results and are more focused on the process or the road per se. As the Buddhist leader, Atiśa said: “the greatest effort is not concerned with results.” First of all, there are many things we cannot control in this world, and one of those is the result of a string of events or the upcoming future. Too much ambition will eventually bring suffering, both mentally and emotionally. Secondly, zen is about being present and fully focusing on the present for peace of mind. Whatever the results, they must be accepted as they are, and we must carry on learning and improving from the past.

Do things thoroughly and completely

A belief held by Zen practitioners states that focusing on a task at hand will start what may be an awakening or enlightenment. This deep focus can also aid in completing tasks fully and comprehensively. At the same time, Zen is about respecting the end-users of objects and doing things following an established norm. Leaving things unfinished or incomplete goes against this philosophy of practicing Zen.

As practicing Zen requires focus and doing things completely and wholly, doing things in a hurry goes against the beliefs and philosophies of Zen. As rushing things can enable tasks to be finished or accomplished in a short period of time, it does not ensure the quality of the end product and result.

Everything in the universe has its place and is believed to be connected to each other. Zen practitioners believe in this connection and that a relationship exists among all things. Too much or too little of something will set off an imbalance and disrupt the harmony in nature. Studies show that East Asian societies nurture this relationship among objects to ensure harmony and balance in any given environment.

Have space between things

Related to the Zen concept of Balance, each object garners respect and value. Arranging and putting things together will create unnecessary clutter and make it harder and more challenging for us to see the true beauty of things. A concept of “ma”, or negative space, in Zen emphasizes that white space is as vital as the notes in sheet music for a musician to be able to make sense of what they should be playing, and for us to be able to hear the clear vibrations of music. In another instance, in Zen cooking, certain dishes are separated from each other on purpose in order to assure each ingredient preserves its original flavor and taste.

Another thing in relation to the concept of negative space or “ma”, silence is an important part of Zen. This is commonly observed when having meals, doing a Tea ceremony, practicing calligraphy, and during monastery training for Zen monks where they do not speak to each other. This is due to the fact that Zen views language as a tool that can cause a distortion in reality and offset the balance.

Zen believes that an attachment to worldly things is the main source of suffering. A typical monk will eat only rice, pickles, and miso soup in observation of this belief. Zen practitioners believe that any habitual pleasure may be a source of suffering, and creating an attachment to materialistic things distorts our own perception of reality, hence the maintenance of a minimalistic lifestyle.

Nature provides us with our daily necessities, making us completely dependent on it, whether it be food, shelter, or water. We bear a connection to nature, as we come from it, and will eventually return to it, thus we cannot be separated from nature. Instead of controlling it, Zen philosophy states that we should strive to live in harmony with and serve nature. At any given moment, it is good to remember that the universe is taking care of us.

Zen makes it clear that to survive, we should be independent of society and family. Many sayings in Zen state the importance of diligence and hard work, and how being idle only will only welcome ignorance and suffering. Focusing and working on things that we are passionate about can help keep idleness at bay and can even lead us to have an awakening.

In Zen practice, there are a lot of established rules or processes called “forms”. This is referred to as the way Zen is observed with the body. Following these forms does not mean observing and imitating others, but rather reflects the alignment with our master and our teammates. Following the forms shows that our whole body and mind is fully experiencing the moment without worrying about self-interpretation and the following movements. Forms can be perfectly mastered after long-term practice when the “self” disappears and one’s true nature takes the lead. The nature of forms can be observed in Japanese martial arts, as it does not focus on winning, but rather strives for perfection of the form and execution.

Although there are different theories on the origins of martial arts, a common notion is that it emerged in Asia. Specifically, in Chinese Buddhist temples as a form of exercise. This training in mental strength and restraint leaves the impression that Zen practitioners have an imperturbable equanimity when faced with pain and shock. While in Western cultures, public displays of both positive and negative emotions are promoted, Zen negates this by observing restraint and control over emotions.

Zen scholars believe that having limitations is the most natural thing in life and it should be embraced as an opportunity to grow and to tame our ego. A typical example would be trying to sleep while hearing the plinking noise of a dripping faucet across the hallway. Zen teaches us that instead of getting annoyed at the sound, we should accept and become comfortable with it for us to grow and better deal and be patient with our problems in the future. This also applies to being resourceful when we have less and facing challenges with few things at our disposal. There is this mantra, “less is more”, that teaches us that a crisis can become an opportunity.

Diaphragmatic breathing or deep breathing is believed to regulate blood flow, increase relaxation, and improve attention. Before the awakening, the main purpose of meditation is to be mindfully aware of our environment. We should learn to accept that sitting with a good posture, practicing deep breaths, and letting go of our thoughts even without sleeping is the only way to remove the barrier that separates the mind, body, and material world.