Chitose is a city in the Ishikari Subprefecture of Hokkaido and is known for having the biggest international airport on the island. It is also interesting to add that Chitose has its onsen areas, one situated close to the airport. Guests are welcome to relax after a long flight or travel. The onsen offers public baths and open-air baths sourced from natural hot springs that beautify skin and bring health benefits.

Shikotsuko Daiichi is also a recommended onsen hotel in Chitose but what is more exciting is that it is near Lake Shikotsu. The lake is a part of the Shikotsu-Toya National Park. In the onsen, guests can enjoy open-air baths, exclusive hot spring baths, and spa treatments. People who stay here can also view the garden of the hotel. Shikotsuko Daiichi invites visitors to try their Japanese cuisine during their stay. 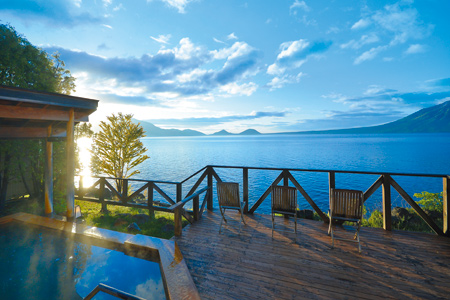 For a stay that is closer to Japanese roots, Marukoma Onsen Ryokan is the go-to when looking for a traditional inn. It is also near lake Shikotsu, which is considered the second deepest lake in Japan. Guests here can enjoy a different view of the lake from their windows while absorbing the refreshing view of the Japanese-style interior. The ryokan experience is not complete without open-air hot spring baths, which Marukoma offers. Feel free to take a dip while enjoying the scenic view of the area.

A location that is close to Chitose is Sapporo. It is known to be the capital of Hokkaido and a place renowned for its long-established hot springs, with some even dating back to the Meiji-era. Its water properties are known to be beneficial to physical healing, which can be enjoyed in nature as most hot springs in Sapporo sit in a forest just like Jozankei Tsuruga Resort Spa Mori No Uta.

Jozankei Tsuruga Resort Spa Mori No Uta is an onsen resort situated near the hot springs of Jozankei. Its hot baths can also be referred to as the “Spa of the Forest”. Guests can enjoy the rooms of the resort, which feature hot-stone baths or a hot-stone sauna. They also pride in food preparations served during the Mori Buffet or during the traditional kaiseki dinner which is a multi-course meal.

Sapporo itself has about 60 buildings that date back to periods Meiji and Taisho. In this area, guests can visit the Hokkaido Museum where it displays a documented history and way of life of Hokkaido. Guests can also travel to the Sapporo Beer Museum, known as the oldest and most famous brand of beer in Japan. The museum tells the history and process of beer, while tastings are available at a separate fee. Attractions can be reached by bus from the Sapporo Station.