Dogo Onsen is one of the oldest and most renowned hot springs in Japan. It is located in Matsuyama and has attracted both tourists and locals with its bathhouses and ryokan accommodations. It has a long history dating back a thousand years ago where it is mentioned by Prince Shotoku from a Japanese legend. The onsen is famous for its public bath, which was built in 1984. Its guests are often from different countries, which could also be seen wearing yukata robes after taking a refreshing dip. 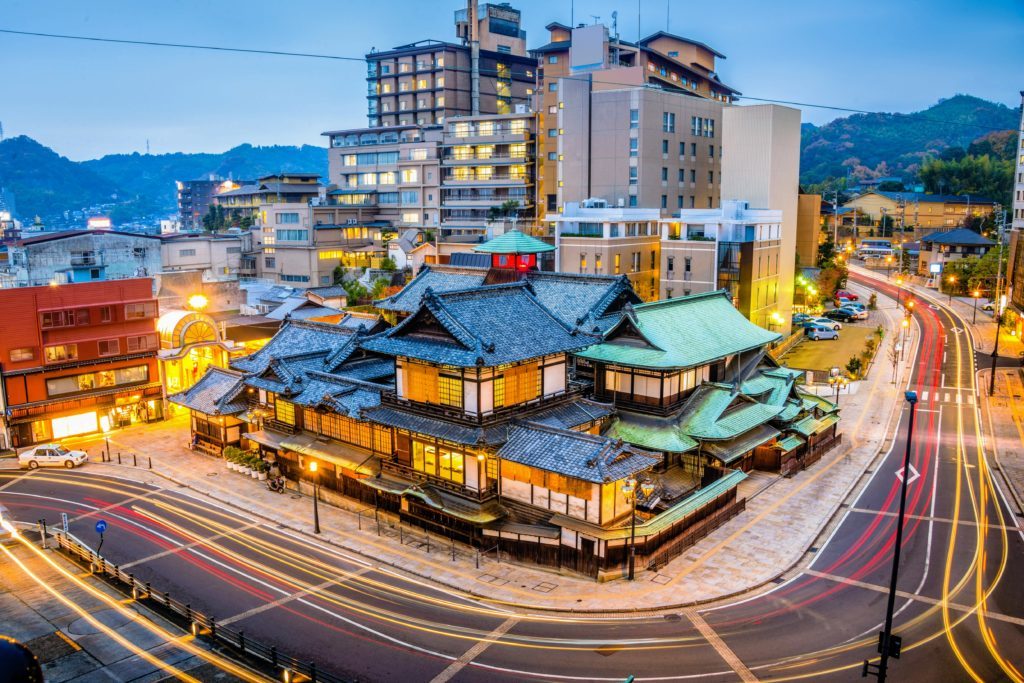 Dogo Onsen in Matsuyama. One of the oldest onsens in Japan

The Dogo Onsen has also been relevant through the years, with its main attraction, the Dogo Onsen Honkan, serving as a reference to one of Japan’s most renowned movies entitled Spirited Away. The water of its onsens are rich in minerals and are capable of soothing tensions found in the muscles. Bettei Oborozukiyo is also one of the top onsens in the area that offers open-air hot spring baths in each of its rooms.

Dogokan is a hot spring ryokan prided by Dogo, also belonging to the top list of onsens in the area. It was designed by a famous Japanese architect named Kisho Kurokawa. The inn is also known through media as it has appeared on television and was near the filming location of the NHK Drama “Saka no Ue no Kumo”. A recent and interesting ryokan one must also visit is Yachiyo. The inn only opened back in August 2018 but has offered guests promising open-air onsen baths, both private and large communal hot springs.

Another recent stay is Dogo Miyu, which opened back in May of the same year as Yachiyo. It offers the city view of Matsuyama and features onsen baths in each of its rooms that can be enjoyed privately by guests. For a cultural experience of the onsen, guests can opt to try the large public bath that shows off scenic views or the open-air baths located on its top floor. Dogo Miyu also offers rental onsens that can be enjoyed by families and couples.

Its location is just a few steps away from Dogo Park, which was a castle in the past. It is now known as the ruins of Yuzuki Castle, where guests can walk around and see the famed cherry trees. People can also stop by shopping arcades to buy souvenirs, especially Studio Ghibli merchandise. The location is accessible by bus rides coming from Matsuyama Station.