How can you become a Ninja?

One can only become a ninja if he/she is born in a ninja family in a ninja clan. There were only two ninja clans in Japan (Iga and Koga) though hundreds of ninjas moved to Edo (Tokyo) during the Edo period. If you were born in the Ninja community, you could become a ninja. Ninja training requires a lot effort and commitment, that is why the culture of ninja gradually disappeared since there was not much need for professional ninjas in the Meiji period. 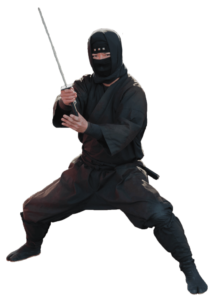 How did the Ninja train?

A lot of theories about the way ninjas trained remains a mystery because ninjas were mostly considered spies and they did not leave much written records behind them. The ninjutsu is a concept that was recently put together in 1900s.
And also in Japan there are dozens of RYU’s (an independent training way or training school) which differ from one another. The oldest ninja training Ryu is Tokagure Ryu though not all ninjas trained in the Tokagure Ryu way. Almost all ninjas trained on stealth walking, fast running and surviving in the wild, making poisons and explosives from the early childhood. 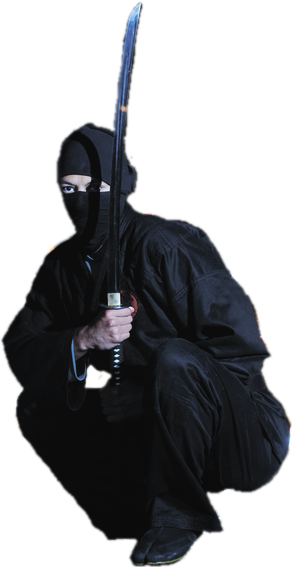 Were there female Ninja?

Yes! If you were born in the Ninja community, you can become a female ninja. Female ninjas knew how to use the ninja weapons but they also disguised as a beautiful girl to seduce the or pretended a sick girl in order to sneak into the Samurai mansion. The female ninjas were called kunaiichi, their sword was different from male ninjas’ sword (not straight and does not have a hand guard).

If a ninja and Samurai had a fight who would win?

If it is an individual fight, the samurai is likely to win though the ninja often used the weapon called kusari gama (sickle with chains) which can be quite effective to stop a samurai with two sharp blades.
1- Samurai were the only ones who carried 2 swords (katana and wakizashi). Ninja usually did not carry any swords. Some ninjas carried only 1 short sword.
2-Samurai were the only ones who traveled by a horse. A samurai with horse is more advantageous than a ninja without a horse.
3-Samurai are more experienced in combat fighting. Ninja specialized in espionage and covert fighting.
4- The samurai were not allowed to have any job except fighting (in the medieval times). Ninja were farmers who were hired as mercenaries.
If it is a small-group fight in a rugged terrain, the ninja may win. The ninja have better survival skills compared to the samurai. If it is a large-group fight, the samurai are likely win.
The ninja and the samurai usually collaborated. However, in certain occasions, they fought against each other. During the war of Tensho-Iga (1581), the ninja clans were devastated by the samurai (The forces of Oda Nobunaga). Even though the ninja were defeated, their guerrilla fighting skills impressed the samurai. The samurai started using the ninja spies after the 1580s.

Were there other warriors in feudal Japan besides the samurai and ninja?

Yes there were warrior monks who challenged the samurai clans for a long time mostly known as sohei. The most well known warrior monk group was Ikko Ikki who ruled some regions in the Northwest Japan in the 1500s. Ikko Ikkis belonged to the Jodo Shinshu Honganji sect of buddhism who used Ishiyama Honganji as their headquarter. They did not wear a helmet and mostly fought by pole arms. They caused heavy damages to the armies of Oda Nobunaga who eventually defeated them in 1580. Similar to Ikko Ikki there were also Yamabushi, the mountain hermits who practiced shuugendo (the esoteric religion that is the combination of Buddhism and shintoism). They were close to the Ikko Ikki and ninjas. Many researchers claim there are similarities between the tactics and lifestyles of yamabushi and the ninjas. Yamabushi disappeared from the history along with Ikko Ikki when Oda Nobunaga burned Ishiyama Honganji in 1580 that was located right where Osaka Castle is located today.

Spiritual training - Seishin teki kyoyo Know yourself, your needs and desires Know the nature, environment and the universe Understand the importance of destiny Be in harmony with the nature and society (harmony) Understand others and have empathy (heart) See and observe your en