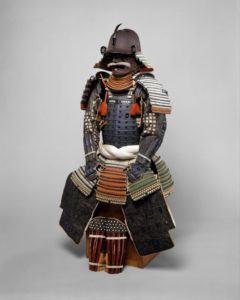 The workmanship of this armor and its materials are of the highest quality. It features a kusazuri (skirt) with an extremely rare color scheme of silk lacings in red, yellowish-green, black, and white. The mon (heraldic badge), in the form of three whirling commas (mitsudomoe mon), is that of the Okabe family, feudal lords of Kishiwada (present day Kishiwada City in Osaka Prefecture). The armor is signed on the inside of the helmet: Eichizan no Kuni Toyohara jū Bamen Tomotsugu Saku (Bamen Tomotsugu living in Eichizan province, Toyohara village). Bamen Tomotsugu was the leading armorer of the Bamen school in the eighteenth century. Complete armors signed by him are extremely rare. 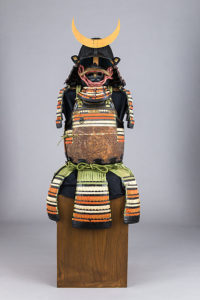 The breastplate of this armor is overlaid with a tooled, gilded, and painted piece of leather likely imported from Holland, reflecting the growing interest in European culture and goods in Japan in the eighteenth century, and the creative ways in which this interest was manifested in armorers’ art. Decorative European leather, often originally intended as a wall covering, was used to embellish a range of equipment, including sword mountings and equestrian tacks. 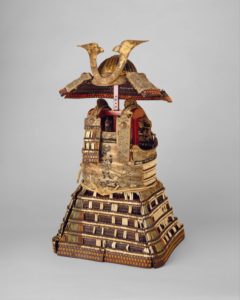 Date: early 14th century
Culture: Japanese
Medium: Iron, lacquer, leather, silk, gilt copper
Dimensions: H. 37 1/2 in. (95.3 cm); W. 22 in. (55.9 cm); Wt. 25 lb. 15 oz. (11.77 kg)
Classification: Armor for Man
Credit Line: Gift of Bashford Dean, 1914
This is a rare example of a medieval yoroi. The yoroi is characterized by a cuirass that wraps around the body and is closed by a separate panel (waidate) on the right side and by a deep four-sided skirt. In use from around the tenth to the fourteenth century, yoroiwere generally worn by warriors on horseback.

Originally, this armor was laced in white silk and had diagonal bands of multicolored lacings at the edges of the skirt and the sode (shoulder guards, missing here). The colored lacings symbolized the rainbow, which represented both good fortune and fleeting beauty. The breastplate is covered with stenciled leather bearing the image of the powerful Buddhist deity Fudō Myō-ō, whose fierce mien and attributes of calmness and inner strength were highly prized by the samurai.
Traditionally, it is believed that this yoroi was donated to the Shinomura Hachimangū , a shrine near Kyoto, by Ashikaga Takauji (1305–1358), founder of the Ashikaga shogunate. 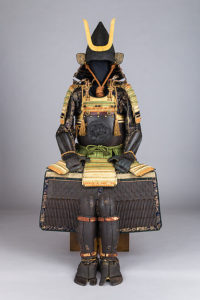 Armor embossed in high relief came into vogue in the eighteenth century, a period of peace and stability under Tokugawa rule. With less concern about battlefield functionality, armorers explored new decorative possibilities, including embossing, a technique that would have compromised the armor’s defensive qualities, since it created catch points for an opponent’s weapons. The Myōchin, among the most well-known armor-making families of the period, specialized in this difficult but spectacular technique. 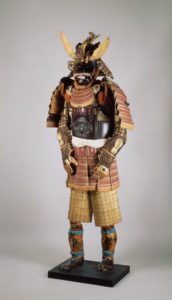 This example comes from the armory of Date Yoshimura (1703–1746), daimyo (lord) of Sendai. The helmet bowl, signed Saotome Iye[tada?], dates from the sixteenth century; the remainder of the armor was constructed in the eighteenth century. The breastplate is inscribed inside with the armorer’s name, Myōchin Munesuke (1688–1735). The embossed ornament on the solid iron plates is characteristic of the Myōchin school. 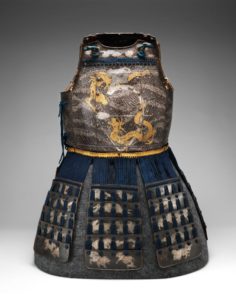 The lavish decoration of this cuirass focuses on the theme of archery. The silver character yumi in the center of the breastplate is Japanese for “bow.” Below, there is a golden arrow entwined by dragons. A large sachihoko, a mythological animal that could control rain and therefore create favorable conditions for the use of bow and arrow, is depicted in silver and gold on the backplate. 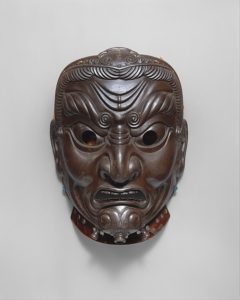 Muneakira’s masterpiece, this mask by Muneakira was already famous when it was first published in 1763. It represents Jikokuten, guardian of the East, one of the Four Kings of Heaven. The mask is also one of the few to retain its original silk head covering sewn to the upper edges. 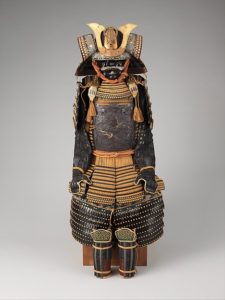 The breastplate is embossed in high relief with designs featuring a dragon and clouds. 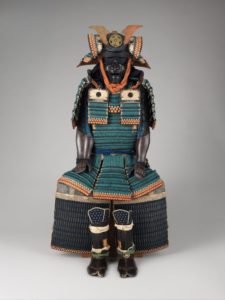 The armor is decorated in several places with the plum blossom mon (heraldic emblem) of the Maeda family, who were daimyo (feudal lords) of Kaga Province (the southern part of present-day Ishikawa Prefecture) and the second largest landowners in Japan after the Tokugawa family. 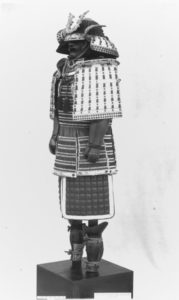 The helmet crest (maidate) has a gilt-copper moon flanked by rising silver waves. The shoulder guards (sode) are decorated in gold lacquer with the image of a rabbit springing from seafoam, possibly a reference to Chikubushima, a popular Noh play. 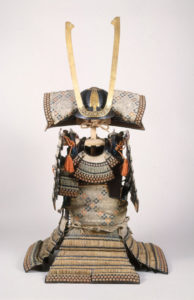 This armor was donated to the Kurama Temple, near Kyoto, by one of the Ashikaga shoguns. During the late Edo period, it passed into the possession of Sakai, daimyo (lord) of Wakasa, then military governor of Kyoto. Sakai had the armor refurbished and its silk lacings replaced with leather ones in the syle of the twelfth and thirteenth centuries. The oldest part of the armor, the helmet bowl, dates from the late Kamakura period (early fourteenth century). 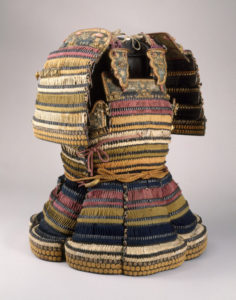 This armor is believed to have been given by Date Masamune (died 1636), one of the most famous daimyo (lords) of his time, to a high-ranking samurai in his service, Shiraishi Bungo. 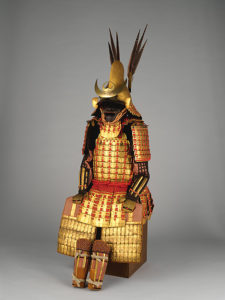 The breastplate and backplate of this distinctive armor are constructed of hinged iron plates. This design affords a similar degree of protection as solid-plate armor but provides greater flexibility and a closer fit for the wearer. Hinged cuirasses of the seventeenth century are rare, and were among the most expensive and time-consuming types of armor to produce. They are believed to have been used primarily by the Uesugi family and associated domains. 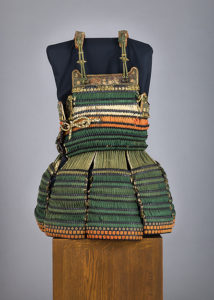 The dō-maru is a close-fitting cuirass with a multisection skirt developed to meet the demand for lighter armor. Of lamellar construction and fastening on the right side, the dō-maru was initially worn in feudal Japan by foot soldiers armed with staff weapons. By the Muromachi period (1392–1573), however, it gained widespread popularity among men of all ranks as foot combat in close quarters became the predominant form of warfare. With its green, white, and vermillion lacing, this cuirass is a rare and fine example from that time. 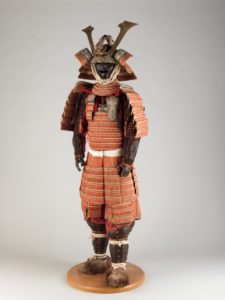 Although constructed in the traditional sixteenth-century gusoku (complete set) fashion, this is actually an example of the revival of earlier armor styles during the Edo period. It was part of the large collection of Japanese arms and armor formed by Arms and Armor Department founding curator Bashford Dean around 1900, during his extended stays in Japan for scientific research. The armor was included in the Metropolitan Museum’s 1903 loan exhibition of Japanese arms and armor from Dean’s private collection, which the Museum purchased in 1904.
Information and images taken from the site Metropolitan Museum