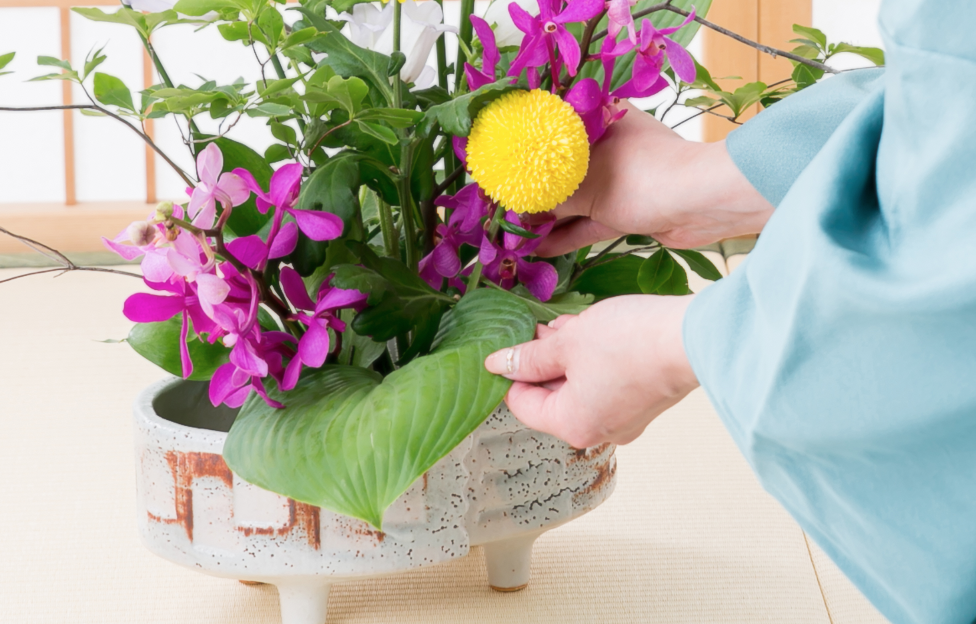 In the previous blog, I talked about what CHABANA (茶花) is. This time I would like to talk about how to make it.

There are no styles of the shape for CHABANA (茶花) like ikebana. But, no matter how good the natural appearance is, some styles aren’t ideal. For example, in some styles like the Kyoka (鏡花) style has the flowers and the leaves facing the guests. Even if it is in bloom, it does not naturally bloom that way.

The way to put in the vase is mainly called NAGEIRE (投入れ), without manipulating the flowers and branches by bending and changing their directions. This arrangement uses the natural appearance of the flowers and enhances the natural and sincere beauty. Like ikebana, the roots do not necessarily have to be aligned. Sometimes it may be difficult to fasten the flowers and branches, but in that case, make a cut at the root, pinch a small toothpick, etc., and fasten it to the flower. KENZAN (剣山), also known as spiky frog, is not used for CHABANA. This is because when you use KENZAN, the flower becomes fixed, and it is easy to find the fun of making it. At the tea ceremony, we place great importance on the principle of “真行草” (SHIN-GYO-SO) or “formal, semiformal, casual”. It is said to be the procedures and the tools, but it is also said to be the “CHABANA”.

However, this principle is a tentative rule made by a comprehensive combination of the master’s heart, tea room, tools, etc., But the most important thing is in this principle, know the rules, and put “CHABANA” in vase flexible. Just as there is “真・行・草/formal・semi formal・casual” in the vases, there is also “真・行・草/formal・semi formal・casual”in the shapes. It is “真/SHIN/formal” style that you put straight in a straight line. It is “行/GYO/semi casual” style that you put in a sideways flow. “草/SO/casual” is the figure that looks like a throw. However, it is taboo to straighten a bent branch and make it like the SHIN/formal style, and you should always think about the nature of flowers and branches. There are many combinations of SHIN/formal + GYO/semi formal or GYO/semi formal + SO/casual between the way the flowers putting and the vases, but the heart is to take advantage of the overall harmony and the natural appearance of the flowers.