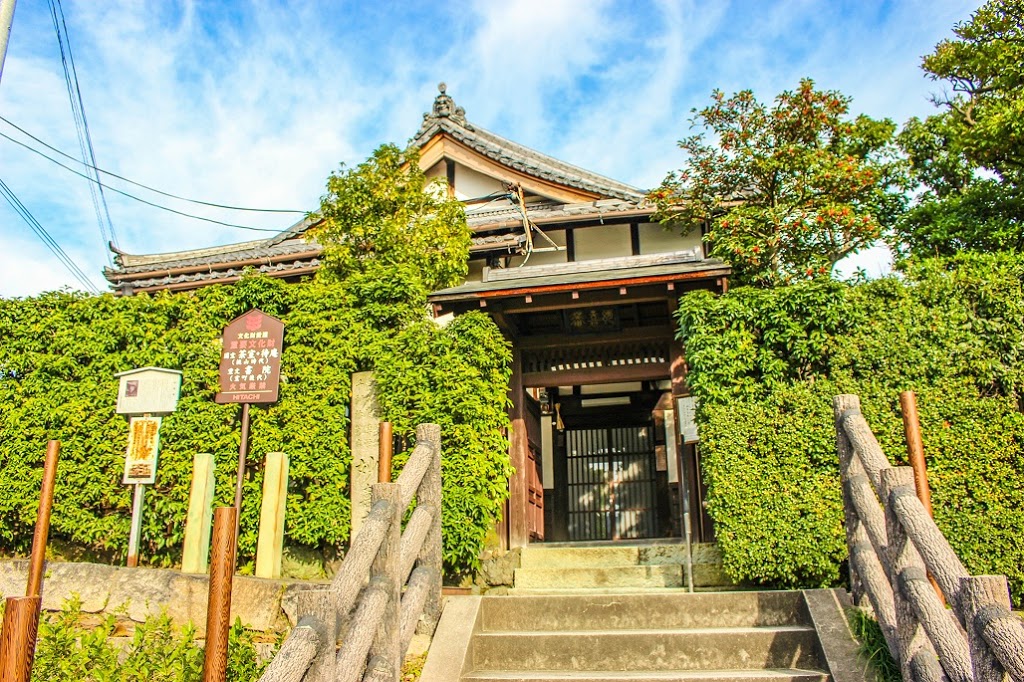 Tai An was built in the Oyamazaki area of Kyoto near Uji, where the best tea leaves are grown. It is considered a national treasure. It was built during the Momoyama Period (1582). It is said that the teahouse was built to help Toyotomi Hideyoshi’s meeting with the other samurai after the death of Oda Nobunaga. It has a great interesting history. Tai An tea house in Kyoto is an architectural heritage of the nation. It is an incredible masterpiece of Japanese Culture, that’s why it is strongly recommended to visit.

There is also a nijiri guchi (crawl-thru entrance for the guest) with a height of only 70 cm. The walls of Tai An are a good example of wabi sabi, where the withered objects are seen as more aesthetically pleasing. It is also believed that Tai An is very small, but the interior looks bigger than it is, because of the balance of the objects chosen. Unfortunately, most of the time the venue is not open to the public. It takes about 30 minutes by train both from Osaka and Kyoto to reach the temple, where the tea house is located.

Tai An is usually closed for public visits.

For the best tea ceremony experience in Kyoto with a historic atmosphere, please check out Maikoya Tea Ceremony.

“At present, Tai-an is located at Myōki-an temple 妙喜庵 in Yamazaki, Kyoto, and it has been designated a national treasure. There is no actual proof that this tea room was designed by Rikyū himself and it is also not exactly clear in what year it was constructed. The value of this tea room lies in the fact that it is both the oldest remaining tea room with a nijiri-guchi 躙 口, and the oldest remaining two-tatami tea room, and as such it represents the developments in the tradition of chanoyu at the end of the sixteenth century.

There are two sources that are used to support the claim that Rikyū designed Tai-an. The first is the oral tradition of Myōki-an, that says that it was built by Rikyū for Toyotomi Hideyoshi at the time of the Battle of Yamazaki 山崎の戦, in 1582. At that time, Rikyū possessed a house in the vicinity of Myōki-an and according to this tradition, Tai-an was moved to its present location after Rikyū had left the area.

Another source that is used to support this claim is a map of 1606, known as the Hōshakuji-ezu 宝積寺絵図.  This map, dating from 24 years after the Battle of Yamazaki, indicates that there was possibly a tea room at the spot of the present 『長崎大学言語教育研究センター論集』第 6 号 temple, but it does not show the size or structure of this construction and is therefore far from a direct link to Rikyū. Later records also show that there was a tea room at Myōki-an, but that this structure did not match the present Tai-an and further weakens this theory. Whether Tai-an is or is not a tea room designed by Rikyū, it is a good example of the simple and rather rough tea rooms of just two and three tatami known as sukiya 数 寄屋 that came into fashion at the end of the sixteenth century”.

Rumiko Handa also proposes that Tai An is the most important work of Sen no Rikyu.

“Some believe that Hideyoshi ordered Sen no Rikyū to design and construct the building while staying at the castle of Yamazaki, up on the hill to the north. Others argue that the tearoom had been a part of Rikyū’s residence and was moved here after his death while the rest of the house was condemned and destroyed. Either way, Tai-an is the only extant building designed by Rikyū.

It consists of the tearoom, measuring 6 feet square, or two tatami mats, with an additional raised floor to the north, the anteroom of one mat to the west, and the preparation space of another mat to the north. While the Tea ceremony can be practiced in a space of any size, Rikyū was reported to have set 4.5 tatami mats/9 feet square as the largest possible limit of the ideal hermitage, following his teacher Takeno Jōō’s philosophy.

In such a restricted space, where even a slight change in breathing was detectable, any careless maneuver by either the host or the guest would have spoiled the proceedings of the ceremony. The inconvenience and discomfort would have put the participants in a state of the alarmed sensibility, making them attentive to the goings-on, while a larger space, though perhaps providing perfect dimensions, would have relaxed them and dulled their senses”. (source: digitalcommons.unl.edu)

Tai An location and hours

Tai An Tai An was built in the Oyamazaki area of Kyoto near Uji, where the best tea leaves are grown. It is considered a national treasure. It was built during the Momoyama Period (

Ryōan-ji Ryōan-ji is located in the northwest of Kyoto. Ryōan-ji is one of the most famous of all rock gardens in Japan. the temple where the garden is was founded in 1450, by a deputy of

Kyoto Botanical Gardens is located at the northern end of Kyoto City.  It is one of the oldest botanical gardens in Japan, it was founded in 1924. It is full of ever-changing seaso

Ōkōchi Sansō Ōkōchi Sansō is located in Arashiyama. It was once the residence of Ōkōchi Denjirō a famous film star of early Japanese cinema. It is a beautiful garden that has many unique features. Such as the Myōkō-an Hall, Ōkochi enjiro Museum, Jibutsu-dō hall, and more. I have one of