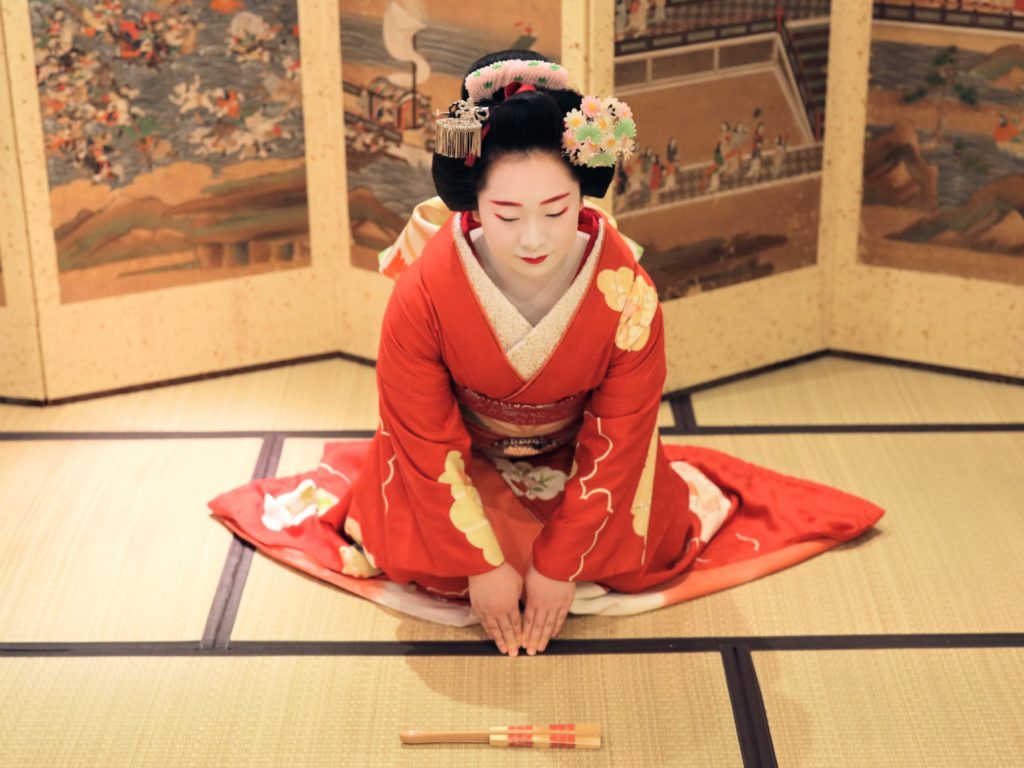 There is a limited number of empirical studies and scholarly articles dedicated to the geisha culture. The role was first practiced by male individuals but is mostly known as a female profession in modern Japan.

Geisha culture and practice is a recognized form of elegant art and is considered as one of the trademarks that define Japan. This study aims to weigh the interest of tourists, whether participants have reason to explore the history or enjoy the experience.

Kimono Tea Ceremony Maikoya and Kyoto Geisha Show & Experience Gion Maikoya conducted this study to close the literature gap and also find out positive and negative evaluations of geisha.  Results have shown that 3 out of 10 travelers are very interested in Geisha culture, with 15.5% having met or watched a data show while traveling to Japan.

Foreigners tend to be interested in the geisha tradition, history and its unique aspect in comparison to the Western culture.

Those who had a chance to meet a geisha were interested in the history of Geisha because of their portrayal in films, and others found the experience cool. Females, in general, were more interested in geisha than men mostly because of geisha’s outfit, and relatability.

Misunderstanding geisha’s cultural significance was a common theme with disinterested responses. (See the tables and appendixes for open-ended survey responses) 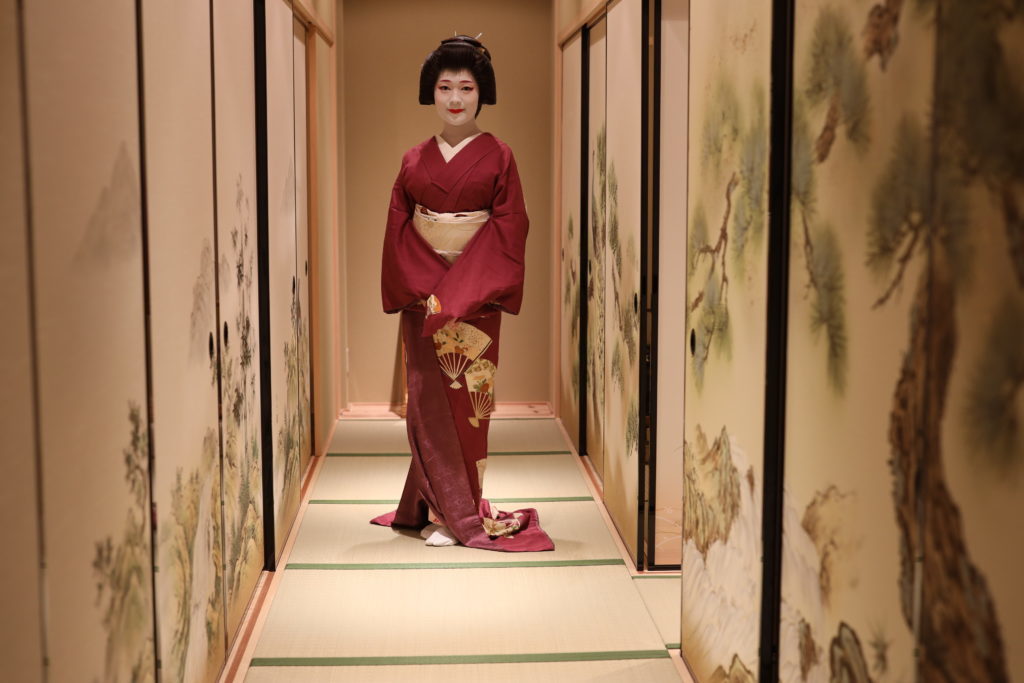 Geiko is an artist and a professional entertainer who excels in traditional Japanese arts. There are currently around 150 geikos living in Kyoto.

People often use the word geiko and geisha interchangeably because these two words mean the same thing except the fact that the word geiko is only used in Kyoto. Geisha are professional artists who are registered in official geisha associations and excel in traditional Japanese arts and crafts such as shamisen playing, dancing, and tea ceremony.

Geiko is the word that refers to geisha in the Kyoto dialect. Broma-Smenda (2014) defines it as “Geisha (geigi or geiko) is a traditional Japanese female entertainer, whose skills include various arts like dancing, singing, and playing music.

Geishas as male companions at banquets were specialized only in traditional Japanese arts in contrast to courtesans (yujô).

In the first phase of data collection, an online survey measured approximately 3000 visitors to the samurai museum in Kyoto during October 2020 and received 367 responses with a response rate of around 15%. In the second phase, another online survey was sent out during November 2020 to travelers who made a reservation on a major geisha experience provider related to any geisha experience in Kyoto. A total of 47 responses were gathered with a survey response rate of around 13%. The respondents were informed about the purpose of the study, and no individually identifying information was collected.

Study I:  In November 2020, an online survey about traveling experiences in Japan was conducted. (N:368 who visited a history museum in Kyoto)

Differences between Males and Females

Results indicated that while 39% of female respondents stated that they were “very interested” in meeting geisha or watching a geisha show, this ratio was only 22% for the male respondents. In the follow up study we analyzed the potential reasons that may cause this difference as can be seen in Appendix 1.

Do foreign travelers actually join a geisha experience while in Japan?

This ratio is difficult to predict as it may vary based on the season and the origin country of the travelers. Our analysis of the responses of 368 people who visited a history museum in Kyoto showed that 15.5% of travelers to Japan “watched a geisha show or participated in geisha tea ceremony experience.” However, once again, this number was below the experiences of Tea ceremony (47%), ryokan stay (46%) and cooking or food tours (30%).

In December 2020, we sent an online survey to those who reserved a geisha experience on Maikoya’s website and asked them the reasons that they decided to join such an experience. The top reasons were related to the personal interest in the tradition and history of geisha while fascination with the actual appearance of the geisha ranked rather low.

The figure below encompasses the most common themes as stated by the respondents of this study. The bigger the text, the more common it is as a theme. 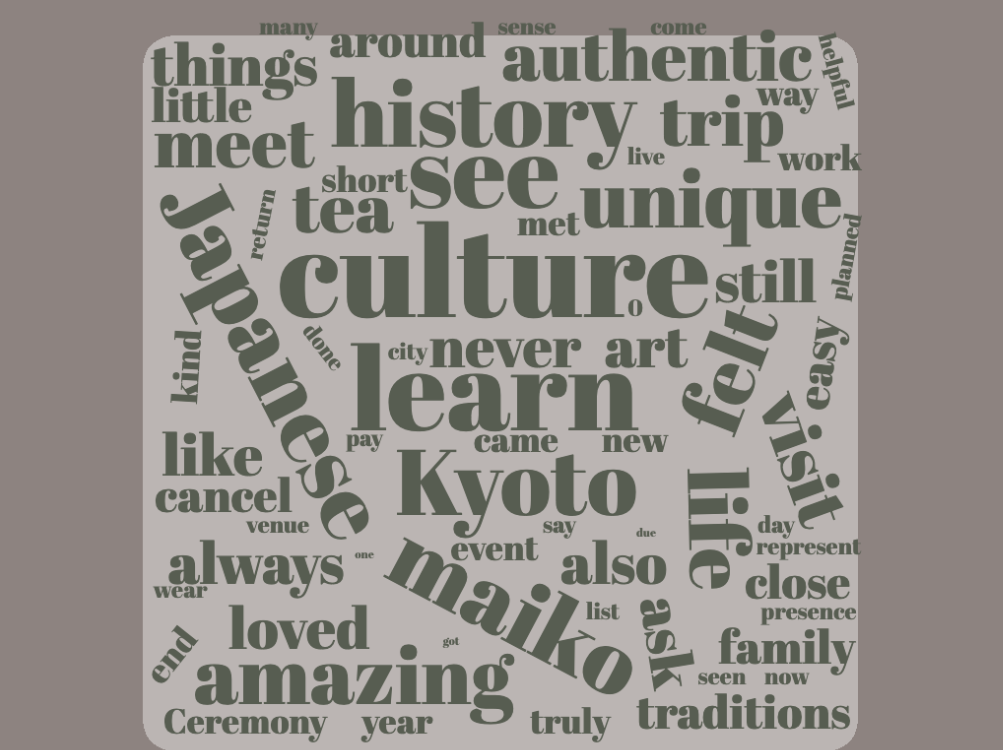 Regarding the gender difference

The online survey conducted last November 2020 shows that 3 out of 10 foreigners who visited Japan are very interested in Geisha culture, with 15.5% having met or watched a data show while in Japan. However, the level of interest is not as high as other traditional experiences such as tea ceremonies, ryokan stays, and other Japanese cultural experiences. We noted that female respondents were more interested in geisha because they cared more about the dress, hair, and make-up of the geisha. It is also noted that negative responses show a general theme of Westerners misinterpreting the culture as prostitution.

Appendix I: Why Females are More Interested in Geisha than Males (Open Ended Responses)

Appendix II: Open-ended responses of 368 Japanese Visitors to the question “Are you interested in “geisha,” why/why not?

Before the survey studies were conducted, the author posted the question “Why are you interested or uninterested in the geisha tradition?” on several online discussion groups on Facebook and Reddit. The post on Reddit was removed after a short while on Facebook there were about 30 comments in total after cleaning the irrelevant comments and repeating comments. Some of the representative examples are provided below.

Appendix IV: Some open-ended responses to “Why did you join the geisha experience?”

Downer, L. (2002). Women of the Pleasure Quarters: The Secret History of the Geisha. Crown.

Maikoya is one of Japan’s leading cultural experience providers with branches in Osaka, Kyoto, and Tokyo. The company specializes in cultural and traditional activities such as tea ceremony, sushi and other cooking classes, calligraphy, flower arrangement, taiko drumming, and the like.