Why are Japan’s Coronavirus Deaths So Low?

By now a lot of people are wondering why Japan seems to be successful fighting against the coronavirus pandemic.  This disease left big scars on Japan with 800 fatalities , 1 million increase in the number of unemployed and trillions of dollars of economic deficit. However, Japan’s experience was somehow different –, with only 6 deaths per 1 million inhabitants, its fatality rate was 50 times lower than that of the U.S. and almost a hundred times lower than that of some European cCountries. The question is, why, or how, was Japan able to achieve that?Studies show that Coronavirus has the highest risk for the elderly and spreads most in crowded places. Given the fact that Japan has the oldest population in the world and also home of the largest metropolitan area with 37 million residents, one may wonder why Japan’s fatality rates are so low compared to Italy, USA and the UK.

To answer this question, Rochelle Kopp, from Japan Intercultural Consulting and I analyzed publicly available data with more than 400 variables and reached the following conclusions.

Let’s just go over what happened:

What caused the low fatality ratio?

There were so many news circulating online and we did not know what to believe. So, we gathered data from all major economies in the world and ran an extensive analysis on the predictors of coronavirus fatalities. We found 3 things: 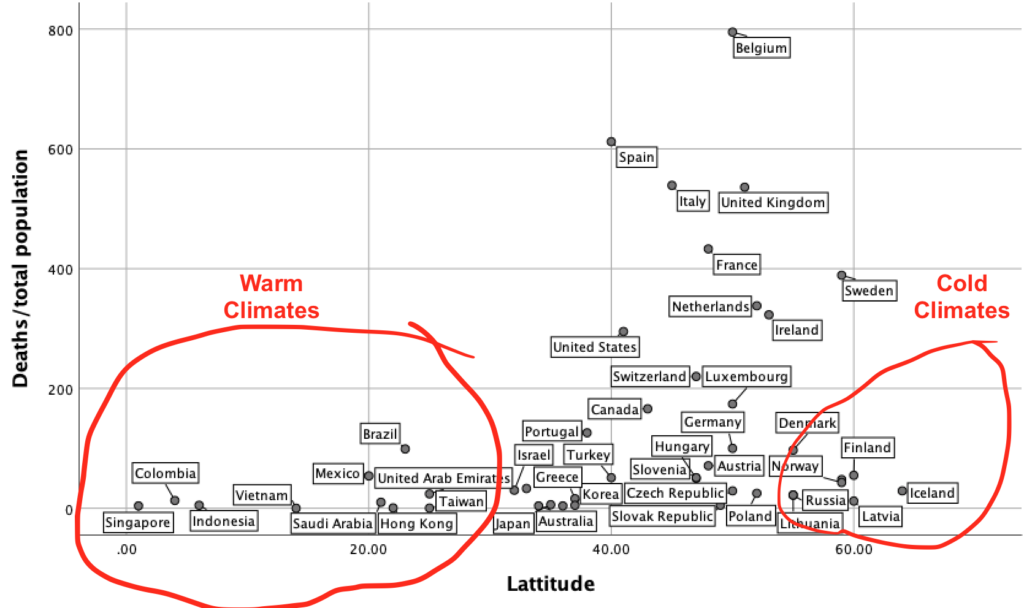 2– Countries in ASIA in general have fewer cases.

3– Countries that have a COLLECTIVISTIC culture seem to be safer. 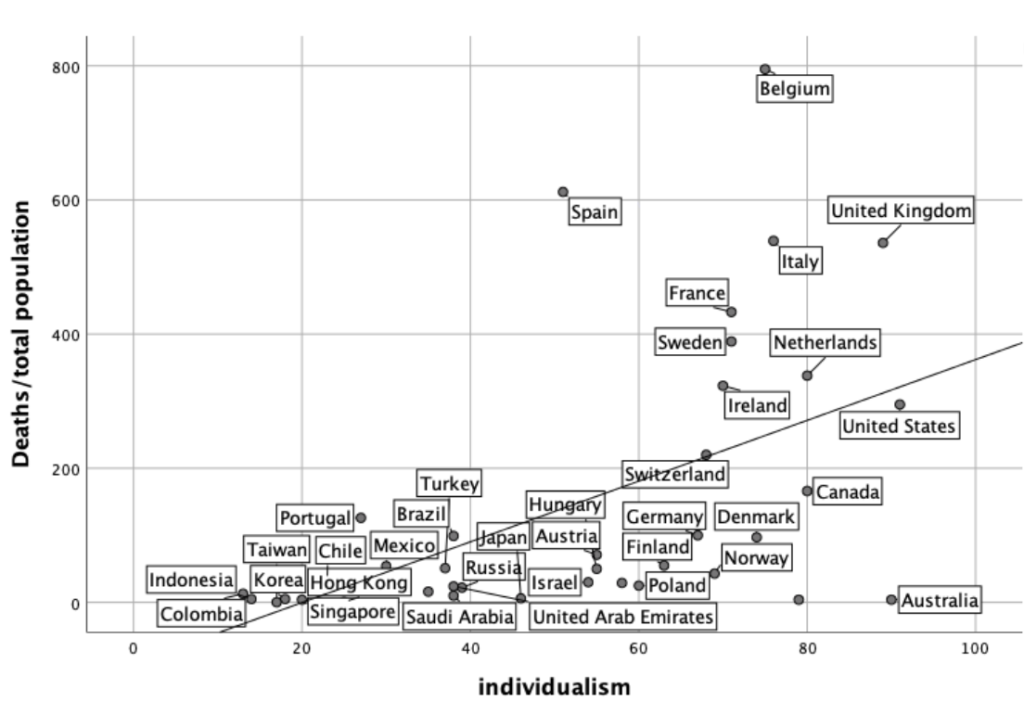 We also noted a historic pattern:

1- The novel coronavirus is very similar to the virus that causes SARS and MERS diseases. Interestingly Japan is the only country in Asia with zero (0) fatality of SARS and MERS.

2- Japan also had the lowest fatality ratio in Asia during the Spanish Flu.

3- While one third of European population disappeared during the black death (bubonic plague), there are no historic records of the bubonic plague in Japan during 14th or 15th centuries. PS: Sakoku, the closing of the country to outsiders, happened in the 17th century, way later.

How about the cases??

1- Wearing Masks Does Save Lives

Even though we were told that masks are not effective, a recent study () found that putting a mask material between healthy mice and the mice with coronavirus reduced the infection by one third. This picture was taken at the beginning of march () when there was NO emergency declaration, no rules and no regulations. Japanese people have the culture of wearing masks not because they want to protect themselves but to protect others. Japanese people also are comfortable wearing masks because it is not a bad thing to scream that you are different.  When there was NO lock down and no regulations. You cannot even spot 1 person in this photo without a mask. While the WHO mentioned wearing a mask does not protect people, Japanese people kept wearing masks. In Japan the mask wearing behavior is considered a risk ritual that is the collective disempowerment during the times of uncertainty ().

We should also note that in countries without the mask wearing culture, people may be more uncomfortable with wearing one and often touch their faces, which can make the situation worse.

In Japan, elementary schools don’t have janitors. Students learn how to clean their schools at an early age. According to the Shinto traditions, everything must be pure and clean. Japanese culture is based on purity and cleanliness. On Google () there are more than 3200 web entries for “why is Japan so clean?” while we could not find any other web entries for any other country except Singapore. In Japan, people also use separate slippers when using the bathroom and take their shoes off when entering someone’s house. Our study clearly showed that in countries where people don’t wear shoes indoors, there are fewer coronavirus cases and fatalities. 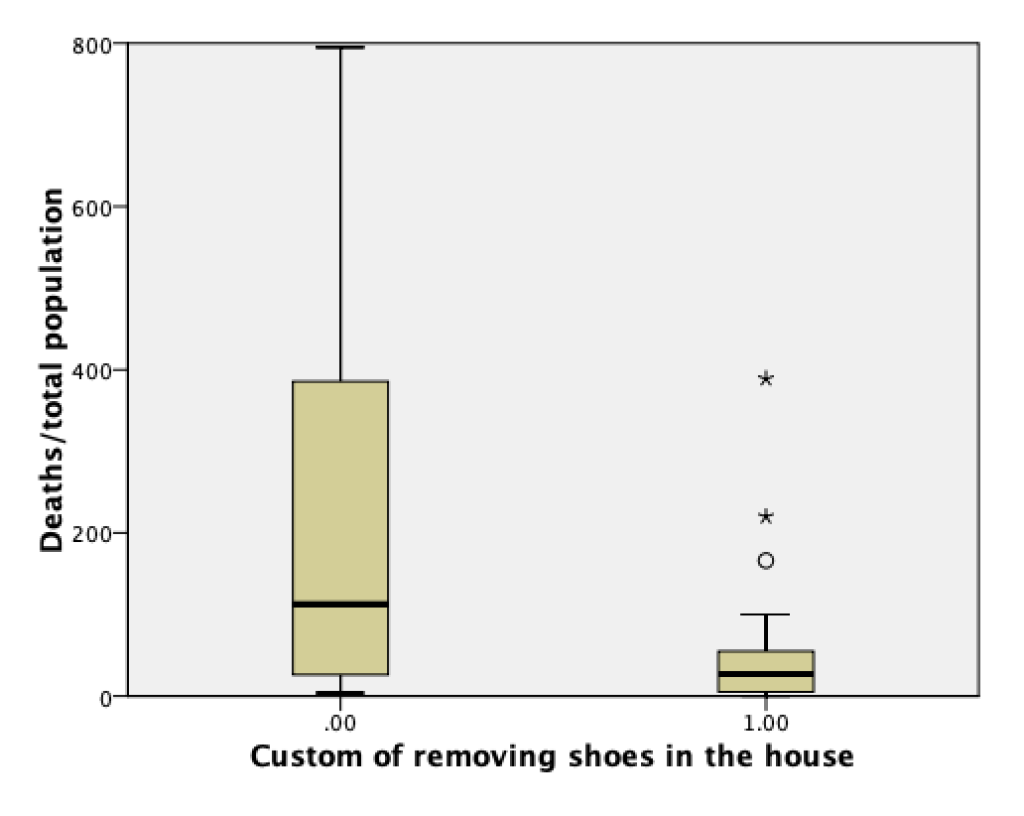 3- No Handshakes & Bowing instead of Hugging and Kissing

Historically Japanese people bow instead of handshaking and there is usually no hugging and kissing during greetings and departures unlike many South European countries. Our study also found that in countries with close greetings there tend to be more coronavirus fatalities. 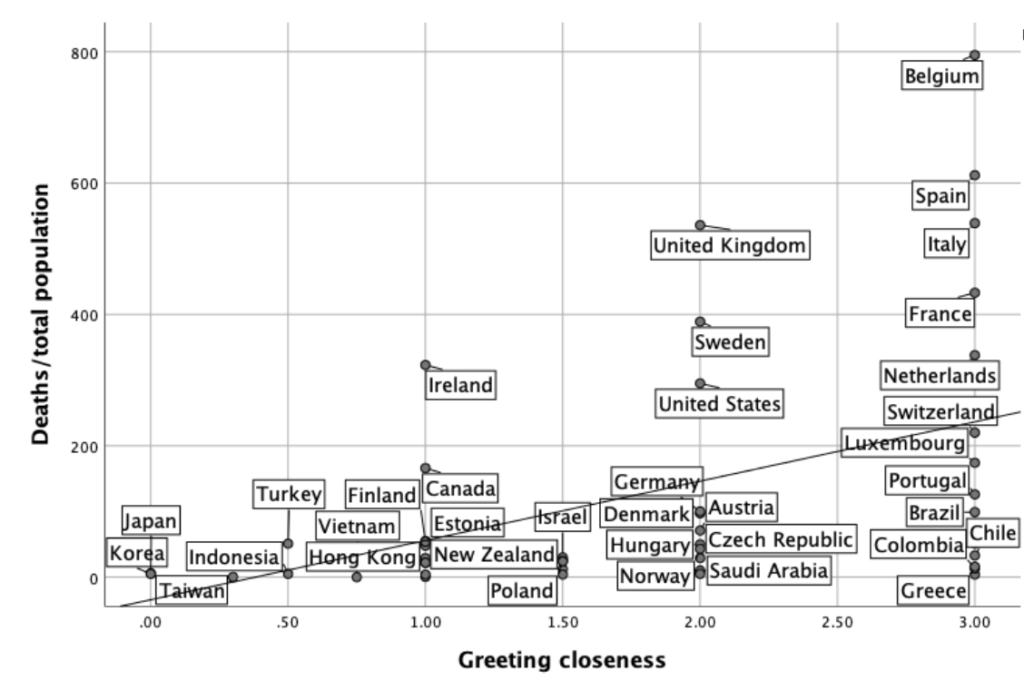 Even though the government failed when it came to mass testing, it shut down the public schools at the end of February and it declared 3 of the most dangerous things to be avoided namely: 3 Cs : Closed spaces, Crowded spaces and Close-contact settings. Initially there were so many news circulating in the Western media about how the virus could stay 9 days on certain surfaces but this turned out to be incorrect () . The fact is the virus mostly  spreads by close contact and in closed spaces which Japanese government realized and acted upon as early as possible. (Prime Minister’s Office of Japan) 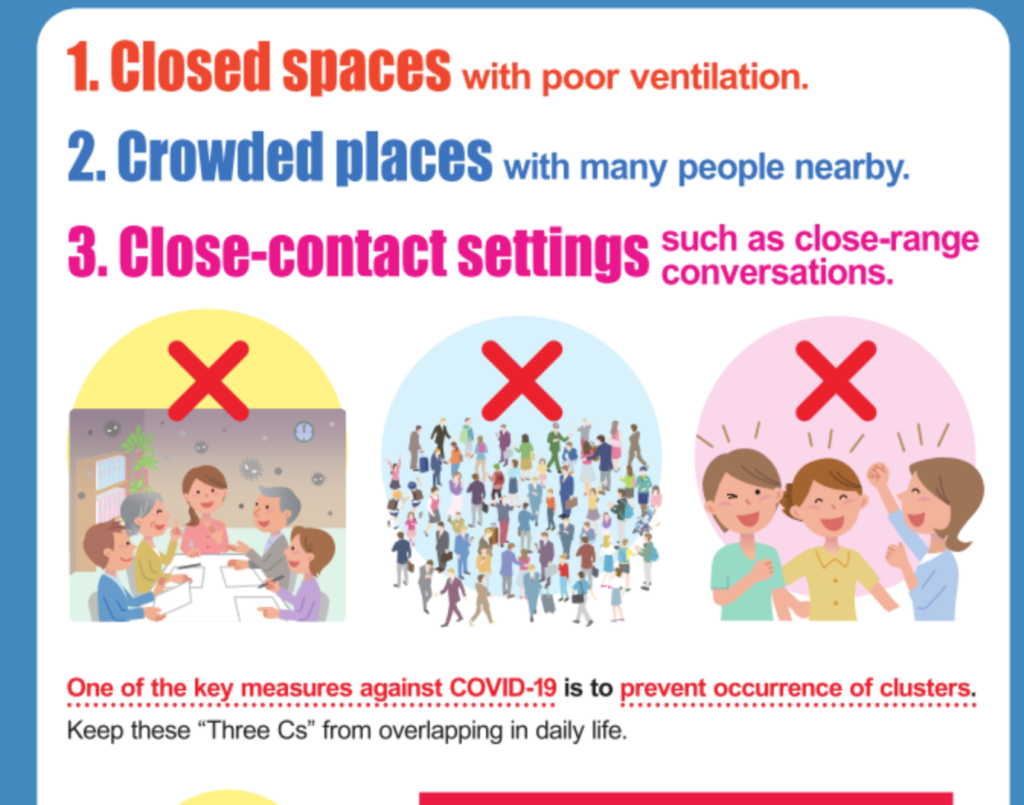 The collective culture of Japan encourages people to follow rules and behave in ways that are for the good of others in society. This explains the overall good compliance with requests to limit activity even though the government did not have the legal authority to enforce lockdowns. This atmosphere of cooperation can be contrasted with what we are seeing currently in the individualistic U.S. culture, where many people are rebelling against the strictures of lockdown.  We also see the group mentality in Japan helping with Coronavirus control, as the chonaikai neighborhood associations have been helping to enforce staying at home. 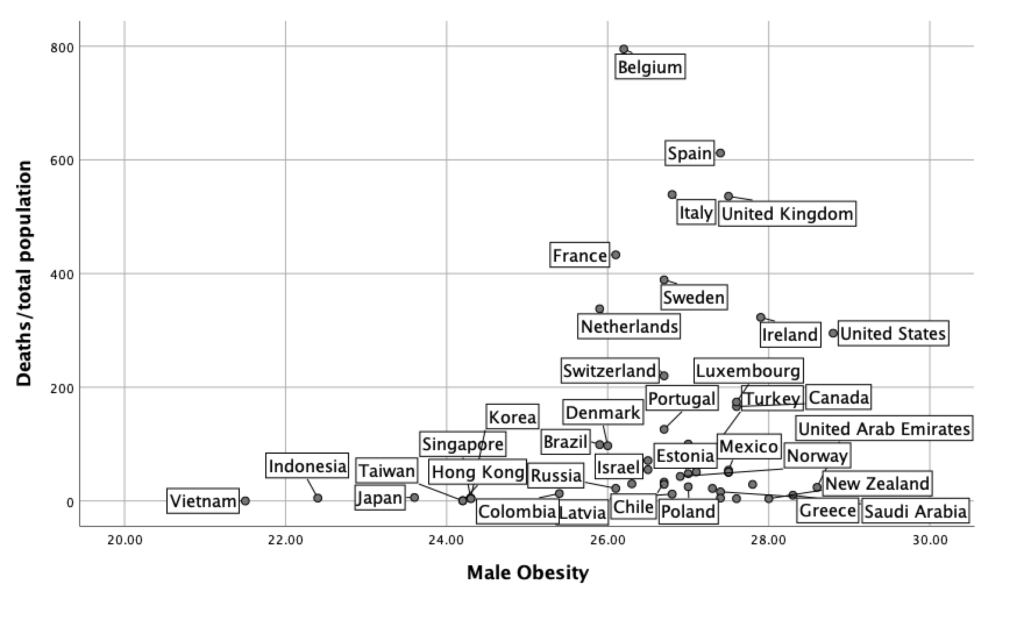 Our early analysis has shown that countries with high number of beds per capita had fewer deaths. Japan’s healthy population also gives it an edge in the fight against the Coronavirus. Japan’s healthcare system is ranked as one of the best in the world, and there is a national universal health insurance system. It has been noted that obesity is a risk factor for Coronavirus, but Japan has very low levels of obesity. Japan also has lower levels of other diseases that are considered to be risk factors for the Coronavirus, such as diabetes and heart disease.