Gosho is the ex-imperial palace and the residence of the Emperors of Japan until the Emperor moved to Tokyo in 1869. Originally when Kyoto became the Capital of Japan in the late 8th century, the Imperial Palace was located 2km west of the present location, but it moved to this location 700 years ago. Burnt down by fire many times, the present buildings were rebuilt in 1855, but you can still imagine the life of the emperors and aristocrats in the Heian period (794 -1185) through reconstructed buildings in its original style.

From Kyoto Station: Take Subway Karasuma Line and get off at Imadegawa Station. Then 8 minutes walk from South Exit.

By Bus: Get off at Karasuma Imadegawa Stop and walk 8 minutes.

On foot:  It is a walkable distance if you are in central Kyoto. The Gosho is located in the northern part of the Imperial Palace Park, so you can walk through the Park.

It is free and opens every day except Mondays. No booking is necessary. If you want to visit Sento Gosho Palace just south of Gosho as well as two beautiful gardens Katsura Rikyu Palace and Shugakuin Rikyu Palace, you need to make prior bookings through the Imperial Household Agency. Also, they can sometimes be closed during special occasions, so please check their website before you go.

They will inspect your bags at the entrance. There are lockers you can leave your bags in the shop immediately after you go in.

There are about 20 existing buildings within Gosho. One thing to be aware of is that life within Gosho is very much about living with a strict social hierarchy. There are many gates around, but each gate is designed for aristocrats of 30 different classes and samurai warriors to enter from a designated gate depending on their class. For example, Kenreimon Gate in the south was only used for emperors. 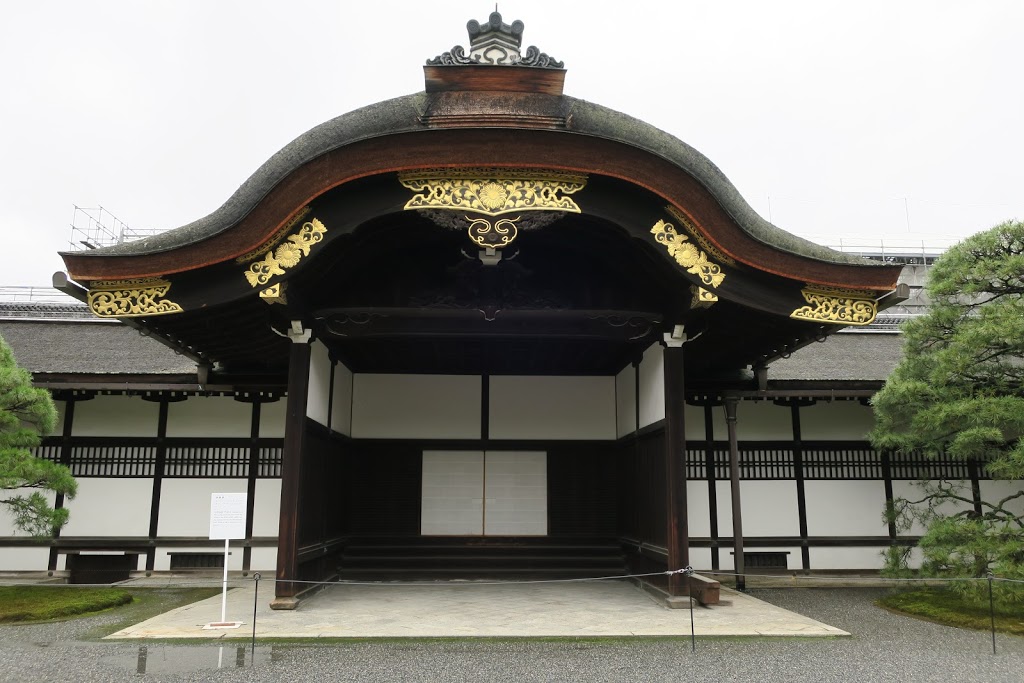 This is where high-ranking officers arrive and get off their carriage before going into the waiting room. In the old days, all the rooms were connected, so guests could go and see the Emperor without getting wet on rainy days.

There is also the New Carriage Porch built only 100 years ago. This porch is facing south closer to the main entrance, and automobiles can also be parked there.

There are three separate waiting rooms next to one another according to their rankings. Paintings on the walls of three rooms are different, and they are called the “Room of the Tigers,” the “Room of the Cranes” and the “Room of the Cherry Blossoms”. You can also see the differences in the design of tatami mattress edgings. Where do you think Shogun, the head of samurai lords was invited to sit down to wait to see the Emperor?  You might be surprised to know he had to wait on corridor wooden floors outside these rooms as he was not an aristocrat.

Samurai warriors were generally seen as the class below aristocrats.
However, it was warriors who had money and power, but aristocrats were poor and often did not even have enough to eat.

Shishinden was the biggest building in the Kyoto Gosho. This is where the Emperors were enthroned and executed all the state ceremonies. If the main doors are open, you can (sometimes) see two chairs for the emperor and the empress. The emperor’s throne is called takamikura while the empress’ throne is called michodai. The thrones are surmounted by an octagonal canopy with a large phoenix on top. These thrones were taken to Tokyo in 2019 and used for the enthronement of the current emperor.

* There was a bigger hall at the original location, but it was never built here. You can see the representation at Heian Shrine.

* These enthronement chairs are now only viewed in a limited season. You can see the replica exhibited on the side of Shishinden. 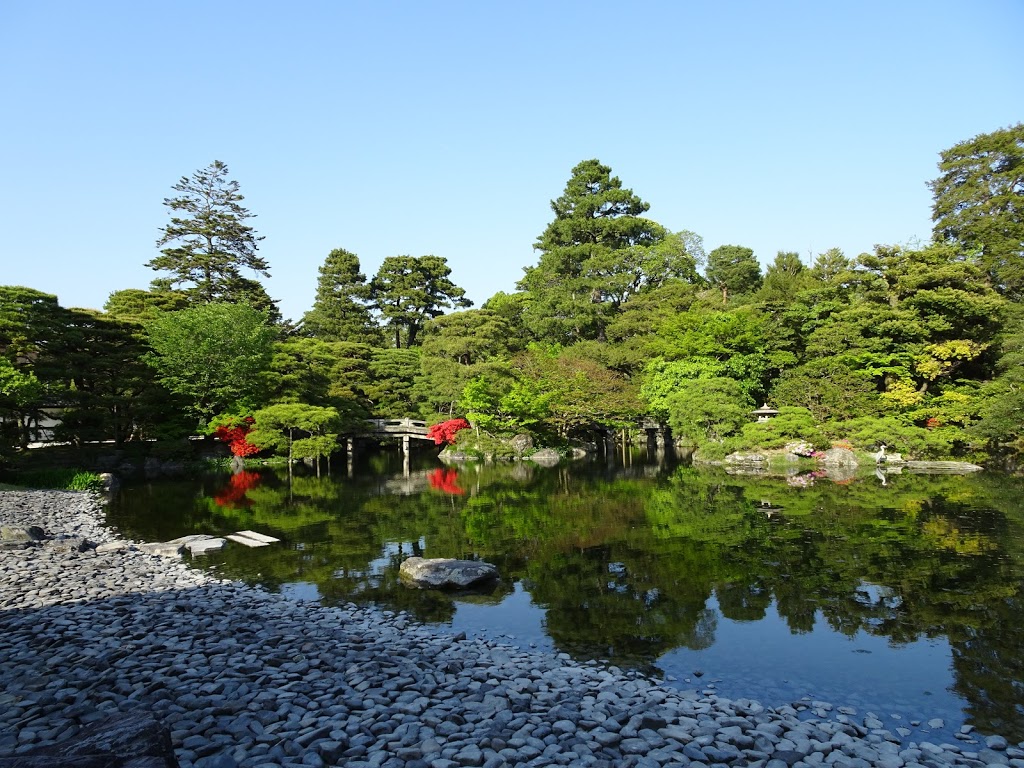 This was the Emperor’s living quarters. One of the major jobs of the Emperor is to pray for the peace and prosperity of Japan. You will see the large tatami mattress where the Emperor kneels down and made his daily prayers.

Seiryoden is now going through a major restoration, and it is not open to the public until 2022. 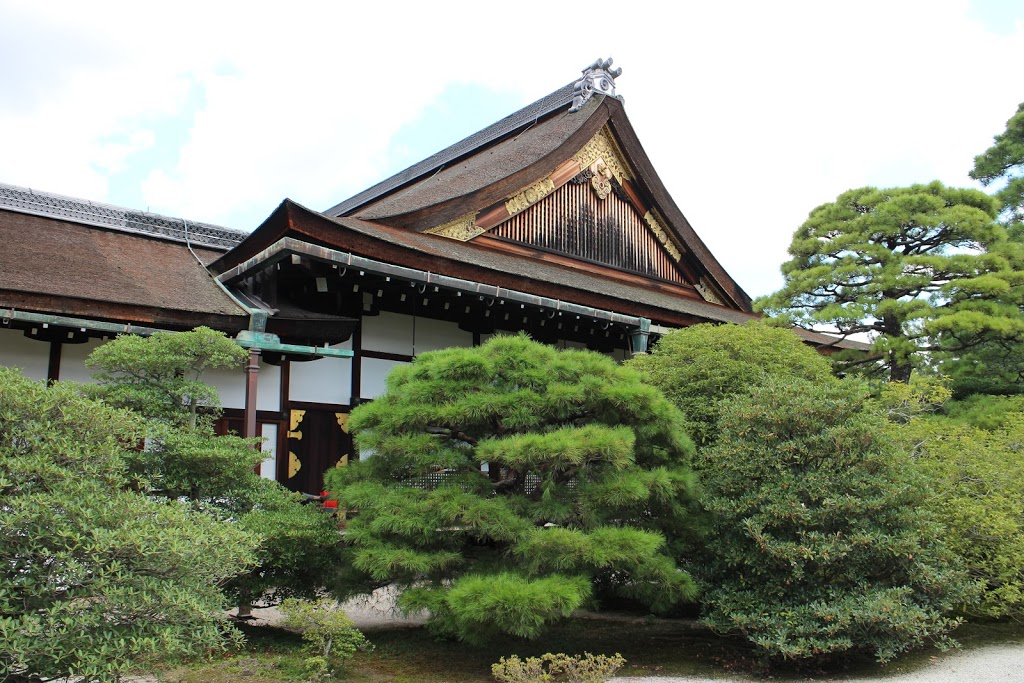 This was the palace for the prince but also used as the meeting place for the Emperor and Samurai lords. It is at this place where the new government officers discussed what to do with the Tokugawa’s, the last Shogunate Family which headed Japan for over 260 years. The Garden in front of Kogosho is designed in a way to welcome guests. Queen Elizabeth II fed carps in the pond here. 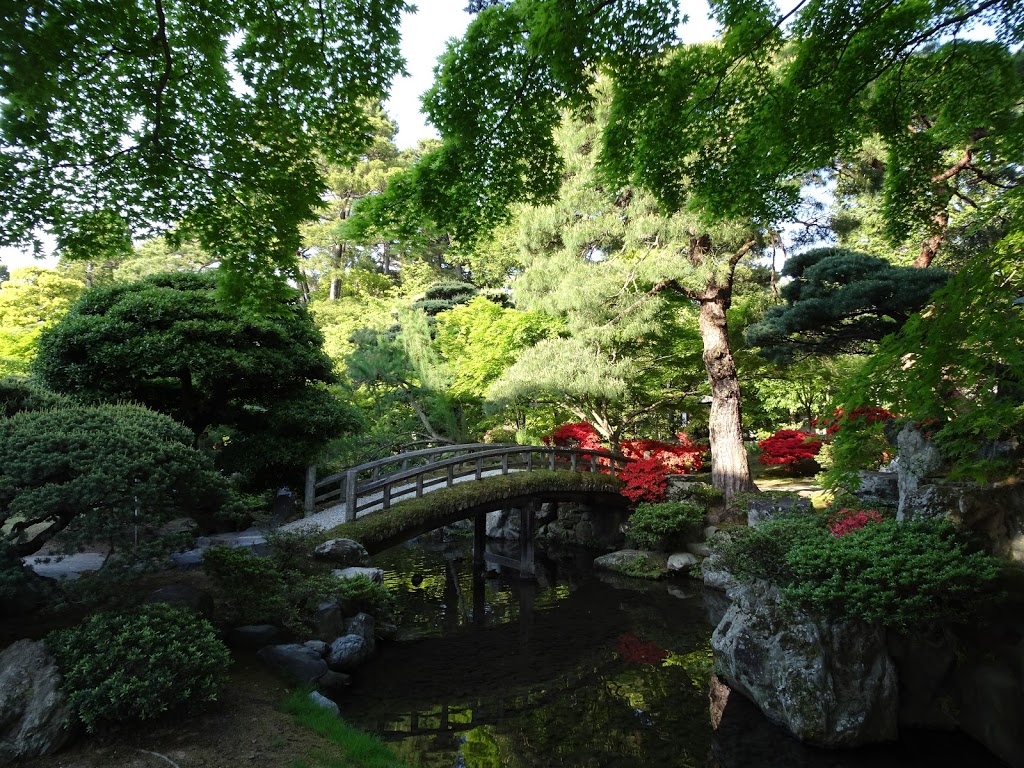 This was the private space for the Emperor including the sleeping chamber. The place was also used for rituals. Moreover, two of the three imperial regalias of Japan, the Sacred Sword and the Jade were kept here while the Sacred Mirror was kept separately. The small garden in front of here is designed as a private garden for the Emperor. 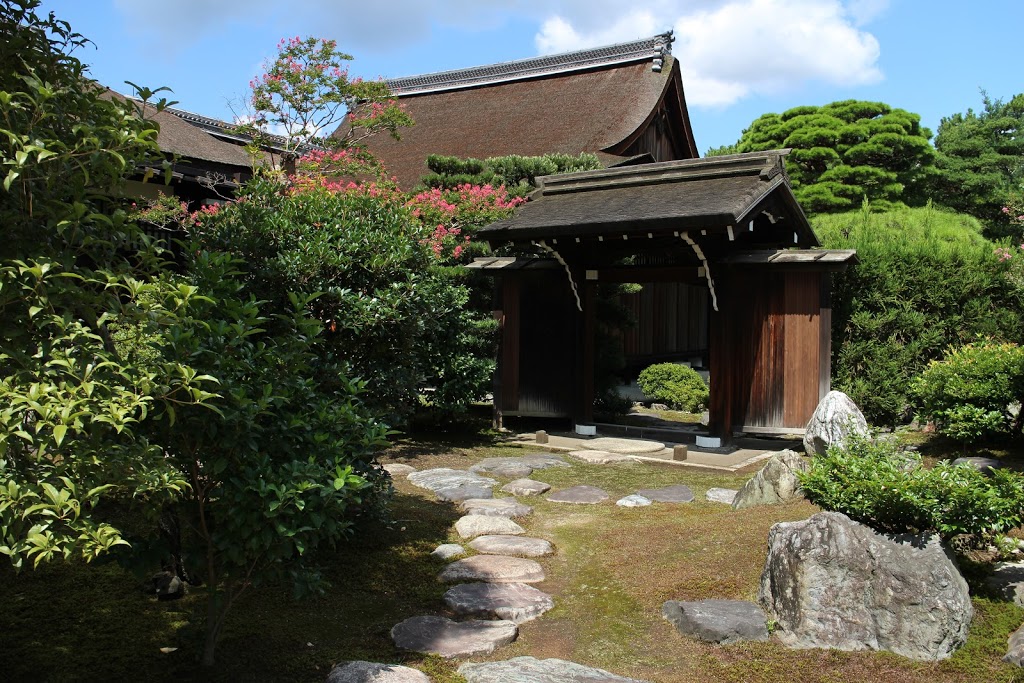 Kyoto is the basin and surrounded by mountains. It is hot in the summer and cold in the winter. At the time when the air conditioning system was unavailable, the summer in Kyoto was just unbearable, so this building was built for the Emperor to cool down. The small hut-like house was built after the Big Earthquake in Kyoto in 1830 as the place for the Emperor to escape in case of an emergency. 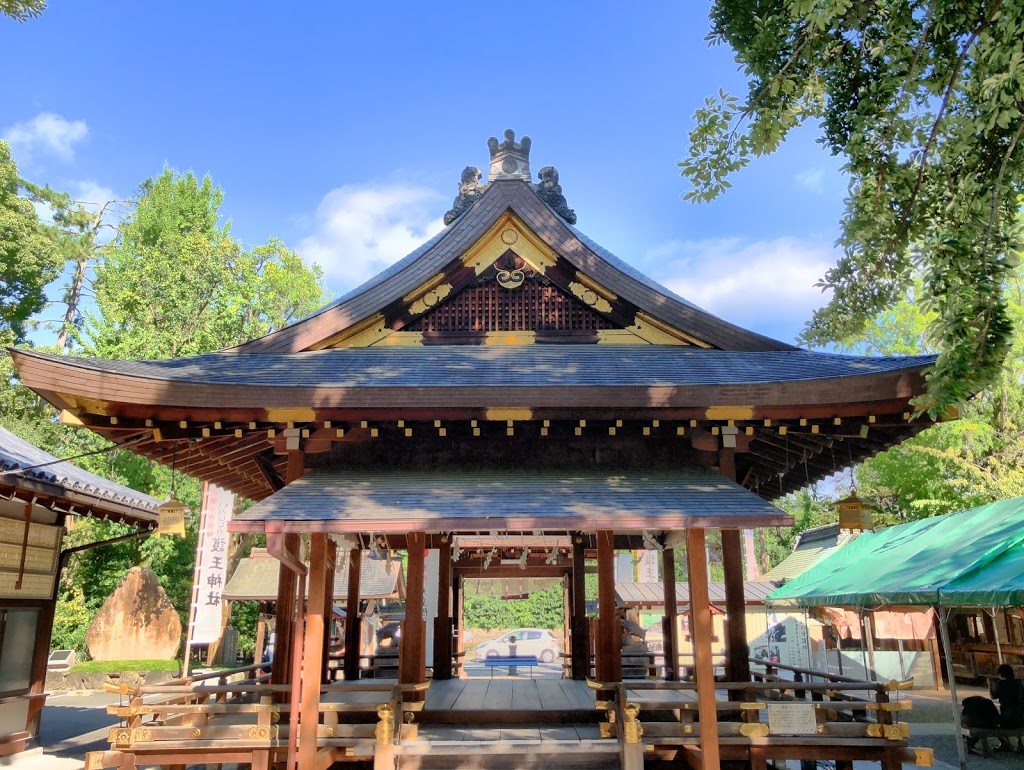 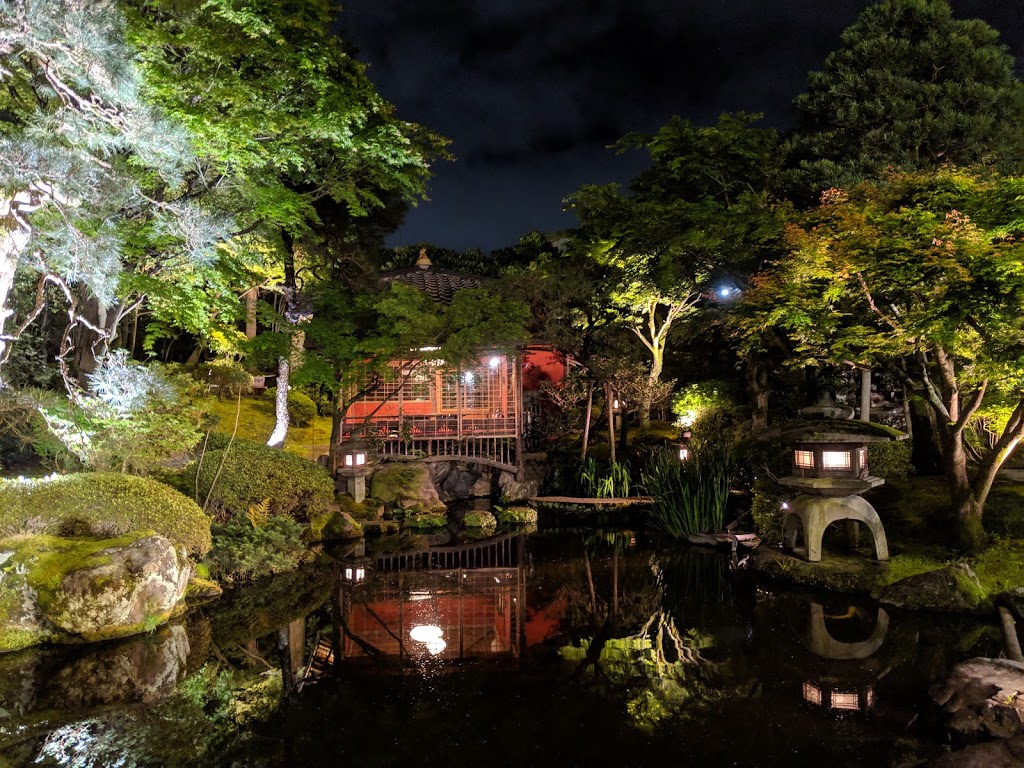 This small garden has always been named as one of the top 10 Japanese gardens by American magazines. It is free, so if you have time after visiting Gosho, please go and check. They have a few restaurants within the hotel.

Within Kyoto Gyoen, there are three restaurants. The closest one to Gosho is Higaki Saryo. They have a daily set meal called Goshoguruma Gozen (Imperial Carriage Meal) for \1,500.

If you go back to Imadegawa subway station, there is Mos Burger, a Japanese hamburger shop. They have what they call rice burger, using rice instead of bread. I think their burger is much nicer than MacDonald’s, but see for yourself.

If you fancy something not Japanese, there is a nice Thai restaurant called E-san on the same side of the street as Mos Burger at Exit 4 of Imadegawa subway station. Their lunch buffet includes many desserts and drinks and will fill you up.

For the hardcore history, art, and culture lovers who are coming to Japan, it is often a question of where to spend the precious limited holiday time. I prepared a list of some of the best museums that the city of Kyoto has to offer. I hope that this list gives you the knowledge and inspiration you

Department Stores and Malls in Kyoto

For many of us, department stores and malls are must-see landmarks and the favorite sightseeing activity on our travels, with all due respect to the cultural & natural values of the country. Kyoto has a fair share of shopping malls & department stores you can spend exploring pretty much all

In Japan, shopping is a national sport with shopping varieties from the high-end brilliant designers to the silliest outfits you will come across. In Kyoto, you can practice best along the Shijo-dori street in the very heart of the city, Teramachi and Shinkyogoku shopping arcades, or the area in an

Kyoto’s tea ceremonies are truly a must-try and one of the best experiences you’ll ever have in your lifetime. After all, Kyoto is Japan’s cultural capital and home to a trio of primary tea ceremony schools. Whether you’re admiring the autumn foliage or the cherry blooms, the tea-drinking

Going about its traditional ways, Kyoto is not without the modern, commercial side, ranging from the world-class international flagships to the traditional stores and antique emporiums, hedonistic heavens of healthy seafood markets & stalls, high tech electronics to the Hello Kitty accessories.