Kinkakui also known as Golden Pavilion, is another most popular tourist destination in Kyoto. Founded by Yoshimitsu, the third shogun of the Ashikaga Shogunate Dynasty in the late 14th century, it is now an untypical Zen Buddhist Temple.  It was burnt down by a training monk in 1950, which became an inspiration for Yukio Mishima’s renowned novel “Golden Pavilion,’ also later made into an excellent film, “Conflagration.” 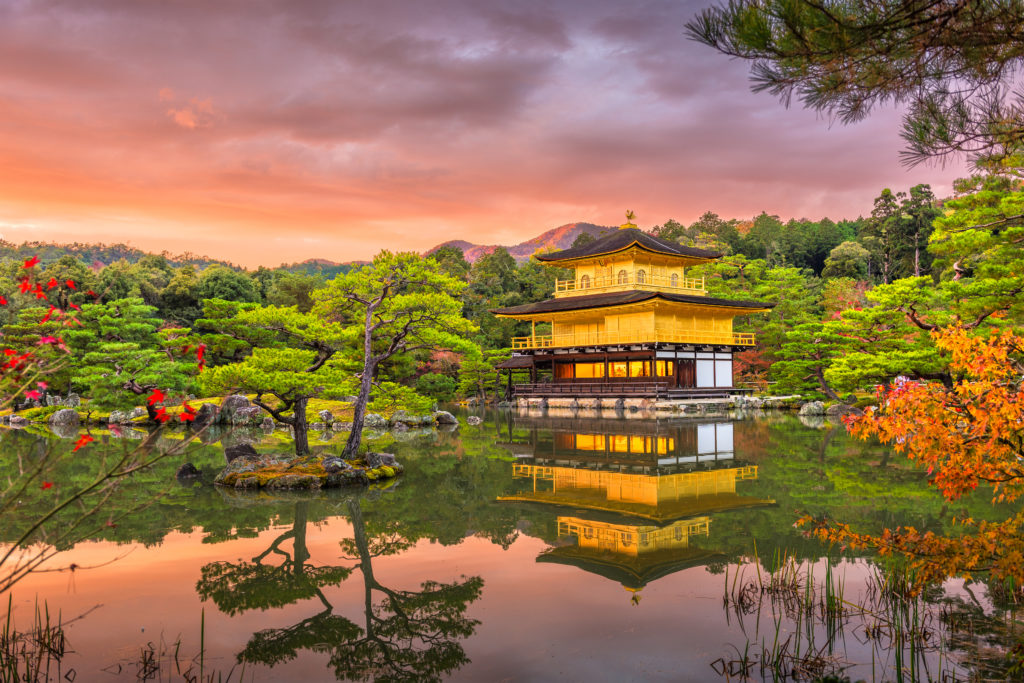 The Temple is always crowded, so go early and queue before its opening time at 9 am. It takes about one hour to walk through the Temple. Be careful that you cannot return back to the entrance once you go in unless you are traveling in a wheelchair.

The problem of the location of Kinkakuji is it is located in the northwestern part of Kyoto. There is no train or subway station nearby.  The nearest station is Kitano Hakubai-cho on Randen Tram, but you still need to walk about 20 mins (There are several shrines; Kitano Tenmangu, Hirano Jinja, Wara Tenjin Shrine, on the way if you take this route). The easiest way to get there is to take a bus from Kyoto Station or from central Kyoto and get off at Kinkakuji-michi stop, and then one minute’ walk to the precincts of Kinkakuji.

10 Things to see at Kinkakuji

Before going into the Temple precincts, if you look up to the upper right, you see a small triangular mountain that looks like a large hill.  This is Mt. Hidari Daimonji.  On August 16th every year, five mountains in Kyoto are lit up with fires to send off souls of deceased ancestors back to the world where they belong.  Each mountain has a different design to be lit, and this one is lit in the shape of the Chinese character ‘Big.’  You can see the trace of that shape even when it is not lit.

At the entrance of the Kinkakuji Temple Gate on the left-hand side, you can see 5 Commandments of Buddhism written on a whiteboard.  No explanation in English is given, but they said:

1. Do not kill all the living things

3. Do not commit adultery.

5. Do not drink excessively. Once you go through the gate, there is a temple bell on the left, and you can sometimes ring it for a small fee.

Shariden literally means the palace to store Buddha’s ashes. Three storied Kinkaku has a distinct architectural style.  The first floor is built in the aristocrat’s style while the second floor is in the samurai warrior style.  The third floor where the container of Buddha’s relic is stored is built in the style of Chinese Zen Buddhism. These different styles express three different philosophies of Yoshimitsu. After being burnt down completely by arson, it was rebuilt 5 years later. The major restoration works were made in 1987, spending 7million US dollars. It has different looks in each season, but it is said Kinkaku under the snow is most beautiful.

4. Phoenix on top of Kinkaku

The phoenix on top of the roof was removed for repair when the arson happened and survived the fire.  The phoenix is an imaginary animal that is a symbol of a powerful emperor.  It is believed they appear only when the right ruler is governing the country.  Yoshimitsu wanted to say he was the rightful leader of Japan surpassing the Emperor. This phoenix is a symbol of his power.  He created the height of the Ashikaga Dynasty politically but also became a big patron of the arts(noh theater in particular) just like his grandson Yoshimasa, who built Ginkakuji and contributed much to the development of arts and culture which still live in today’s Japan.

Golden Kinkaku is too flamboyant on its looks like a Zen Buddhist Temple, but its garden and pond are also superb to look at and walk around.  Many pretty-looking stones are donated by provincial samurai lords, and many of them represent Crane and Turtle islands which symbolize the longevity of the Ashikaga Dynasty. Ashihara-jima, the largest island on the pond represents the whole of Japan, and Yoshimitsu must have looked down onto the island from the verandah of Shariden, and thought he was the rightful leader to have conquered Japan. With the borrowed landscape of mountains behind, its scenic beauty deserves more attention.  When you take a photo of Kinkakuji, make sure to include the reflection of Shariden on the Pond.  Towards the end of the pass by the pond, usually many Japanese carp are seen.

This is a gigantic bonsai-like pine tree Youshimitsu is said to have planted 600 years ago. It is in the shape of the boat leaving for the Buddhist Paradise in the west.  In fact, it is looking towards Shariden. If you have keen interests in bonsai, you must go and visit the bonsai village in Omiya or the Kinashi and Kokubunji Districts in Takamatsu.

There is a famous Chinese saying that ‘a carp going up the waterfall and transforming itself into a dragon,’ which means a child turning into a successful person against many adversities in life.  The stone is a representation of the above saying, and along with Turtle and Crane islands, it is common to see Rigyoseki at Japanese gardens.  Compare it with the more elaborate Rigyoseki at Tenryuji Temple in Arashiyama.

8. The Photo Spot after passing Anmin-taku

Before being handed over to Yoshimitsu, the place belonged to the Saionji aristocratic family. Anmintaku is the quiet pond dedicated to the white snake which is believed to have protected the Saionji Family.  I am not as superstitious as most Japanese, but one thing I believe is that each household is protected by a snake.  I saw a huge snake moving under the house in my own eyes half a century ago when my family built a new house for me and my brother. After going up against some stairs, there is the best location to take a great photo of Kinkaku from above, so do not miss it.

You must think about why you are making a stop at this shabby-looking tea house. This thatched-roofed tea house was originally built for the Emperor who was visiting Kinkakuji in the 17th century. It is said the view of Kinkakuji from here at the sunset is most beautiful even though it is difficult to see it as we are not allowed to step in.  The pillar at the alcove is made of a twisted Nandina tree. Japanese believe Nandina (‘Nanten’ in Japanese) transforms bad luck into good luck as we say “Nan o ten zuru.” You can sometimes see Nandina trees at Japanese gardens to ward off evil spirits, but it is rare to be used in architecture as they are thin and do not grow straight.

This building towards the end of the Temple worships Fudo Myooh. Fudo Myooh is a reincarnation of Buddha, and he is angry with the people who do not believe in Buddhism. On the left, there is a place where you can copy one Chinese character out of a Buddhist sutra (Shakyo), and on the right, there is a place you can get a temple seal (Goshuin).

Other places to go nearby

Ryoanji Temple with a famous stone garden is 15 minutes’ walk away. Daitokuji Temple Complex is only several bus stops in the north. You can also go to Arashiyama from Kitano Hakubai-cho by Randen tram. Take a bus eastward for Ginkakuji.

If you happen to be in Kyoto during the cherry blossom season (usually between the last week of March to the second week of April even though it can change year by year), one of the best places to see cherry blossom in Kyoto is Haradani-en in the north of Kinkakuji. They have a free shuttle bus running during the season from the front of Wara Tenjin Shrine. This is also a nice area to cycle around on a clear day if you are feeling strong and adventurous enough! 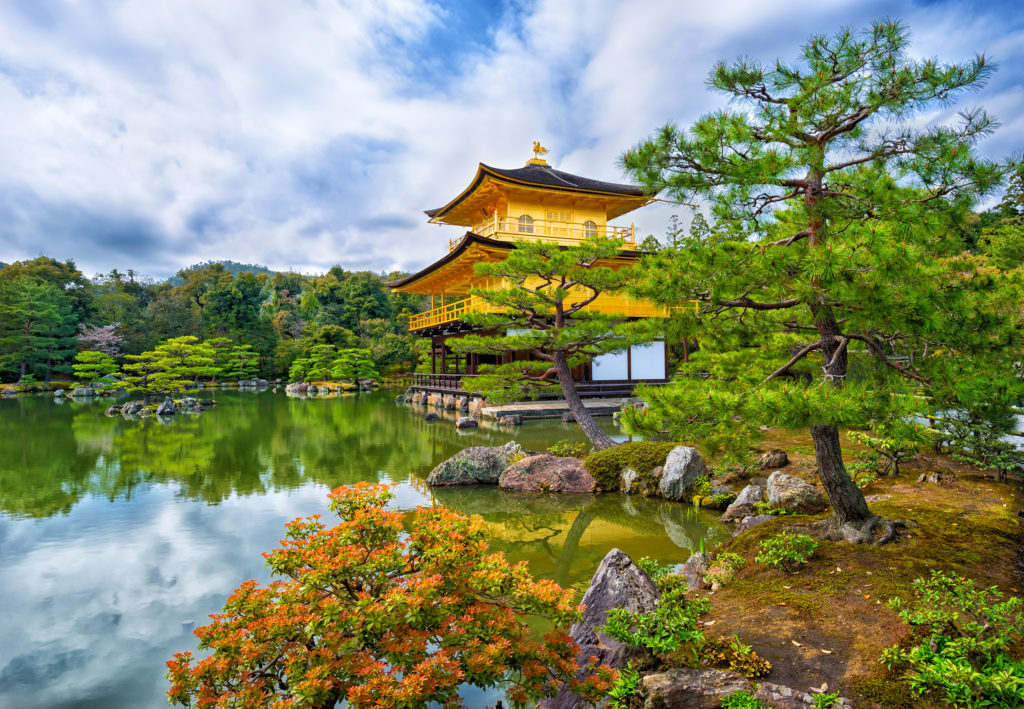 At close to the exit of Kinkakuji, wasabi peanuts by Mamemasa are sold.  It is mildly spicy and goes very well with beer if you like wasabi. It is only 4 dollars a pack, so good for souvenirs, too. Try tasting before you buy them. Also, matcha ice cream sold near the toilet is also nice.  You can also have ice cream with gold leaf even though the taste might be disappointing!

Otherwise, there are not many places to dine as Kinkakuji is located on the northern edge of Kyoto. But recently, there are several noodle shops opened between the bus stop and Kinkakuji.

Gontaro is a popular Kyoto-style udon restaurant, and it has a branch 5 minutes’ walk from Kinkakuji. It is on the way to Ryosanji Temple, and in fact, there are many small places to eat around according to your taste. This branch has both tatami mattresses seating and chair seating.  They take bookings for groups.

Hamazushi is a conveyor belt sushi chain store, and they have a branch near Wara Tenjin Shrine, 10 minutes’ walk from Kinkakuji.  This is a kind of restaurant many Japanese families go to, so avoid busy lunchtime on weekends.

There is also Sato near Hirano Jinja Shrine (famous for cherry blossom viewing in spring). It is a family-type restaurant in which you have different kinds of dishes on the menu to choose from.

Located on the Hill of Eastern Kyoto, Kiyomizu-dera Temple is one of the most popular landmarks to visit in Kyoto for a long time both among Japanese and overseas visitors.  I