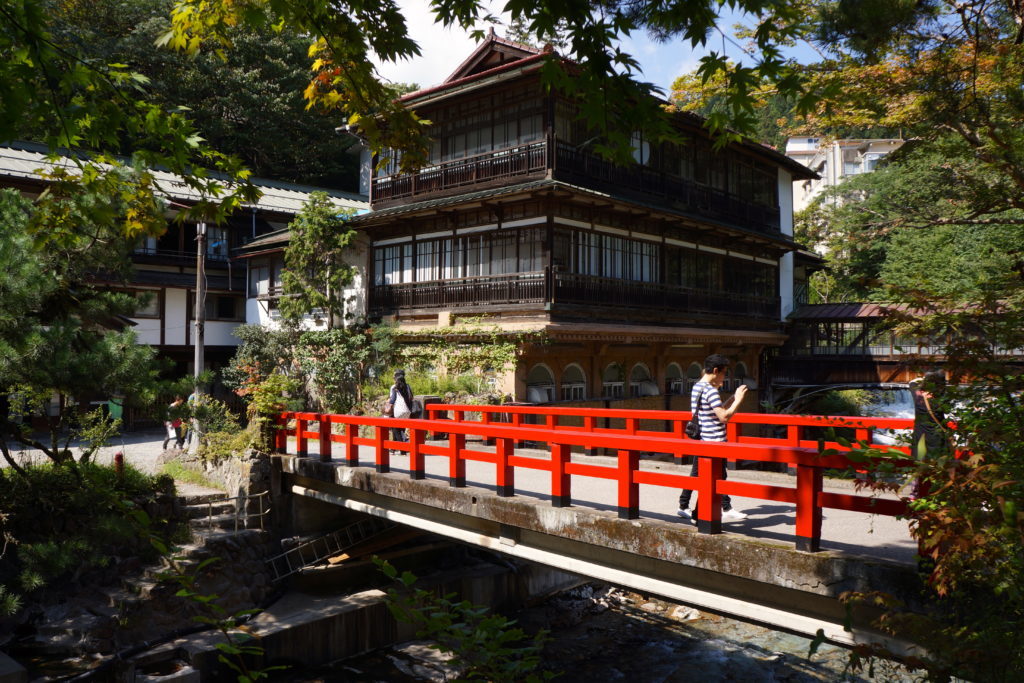 Shima Onsen is a peaceful town located in Nakanojo, in the northwest mountainside of Gunma Prefecture. It is considered as one of the top four hot spring towns in the prefecture with Kusatsu, Minakami, and Ikaho. The name “Shima Onsen” literally translates to “Forty-thousand Hot Spring” as it was said that its waters could heal that many ailments.

Nestled in Shima River Valley, the town has over 40 hot spring water sources and is made apparent by its many ryokan, public bathhouses, foot baths, and hot spring drinking fountains. However, the small town has preserved its serene atmosphere, and the surrounding nature, making it an ideal destination for local and foreign tourists who wish to escape from the hustle and bustle of the big cities.

Tourism flourishes even more in the autumn season between late October and early November when the surrounding forests and the mountains turn into shades of reds, oranges, and yellows.

The town has three distinct areas–the southern part of the valley being the quietest is littered with traditional inns and a gorge is known as the Kanmangafuchi Abyss. This is also where Seiryunoyu, a public bathhouse, can be found. The structure is located along the Shimagawa river, near the southern entrance of the town.

The town center features narrow streets, also known as Ochiai Dori, dotted with quaint shops and game arcades, and bars and restaurants along with foot baths and drinking fountains. This is also where visitors can find the centuries-old Sekizenkan, with its preserved Taisho Era fixtures and Roman-inspired indoor baths.

The iconic red bridge was also an inspiration for Hayao Miyazaki’s “Spirited Away”. Visitors can also visit the Kawaranoyu, a beloved icon of the town, is a public bathhouse situated at the rocky fork of the Shimagawa River. The building is known for its distinct cylindrical shape and gender-segregated baths.

A bonus for the more adventurous visitors: the southern and central part of Shima Onsen can easily be explored on foot while the northern area may be reached with some assistance from a rental car.

In the northern part of the town where the area has a higher elevation, visitors will be able to find the Gomusonoyu or “the hot spring of dreams”, the town’s earliest discovered hot spring source, and next to it, the quiet Buddhist temple, Yakushido, that serves as a dedication to the founding of the town of Shima. Further on, there is the Okushima Lake and the Shimagawa Dam as well as many waterfalls.

Shima Onsen can be accessed by taking the JR Kusatsu Limited Express from Ueno Station in Tokyo to Nakanojo Station. Travelers can also take the Kanetsu Bus from Tokyo Station Yaesu Exit to Shima Onsen directly. It is, however, advisable to take a rental car from Takasaki Station to Shima Onsen as this will make exploring the town easier as well.