Musashi did not have a master daimyo so he was a ronin. He had more than 60 sword duels, the highest number recorded. He is said to have killed 17 people in his battles. His first battle was when he was 13. He was very strong and a skilled carpenter, architect, calligrapher and an artist. He was about 180 cm while an avg. samurai was 150 cm tall. He wrote a book to train samurais and the swordsmen. His scrolls were gathered under the title of “the book of fiver rings” which was quite popular in North America among martial art practitioners and business leaders specially in the 80’s.

Miyamoto Musashi emphasized that techniques are less important than the overall goal. The same fighting principles apply to not only one-on-one conflicts but also army battles. He said everyday is a combat and a samurai should have the combat stance every day of his life. 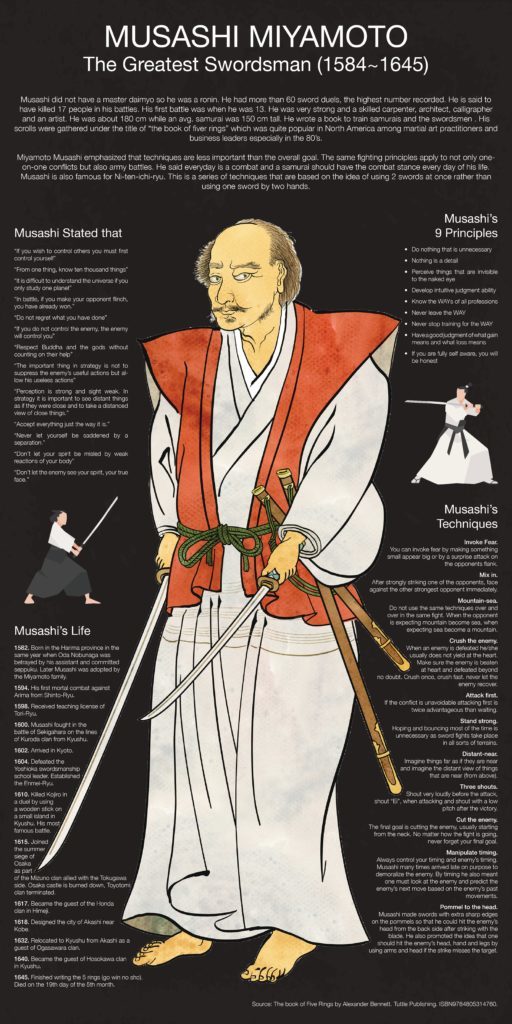 Musashi is also famous for Ni-ten-ichi-ryu. This is a series of techniques that are based on the idea of using 2 swords at once rather than using one sword by two hands.

He wrote a book to train the samurais and the swordsmen. The book is recommended to everyone including martial arts practitioners and business leaders. 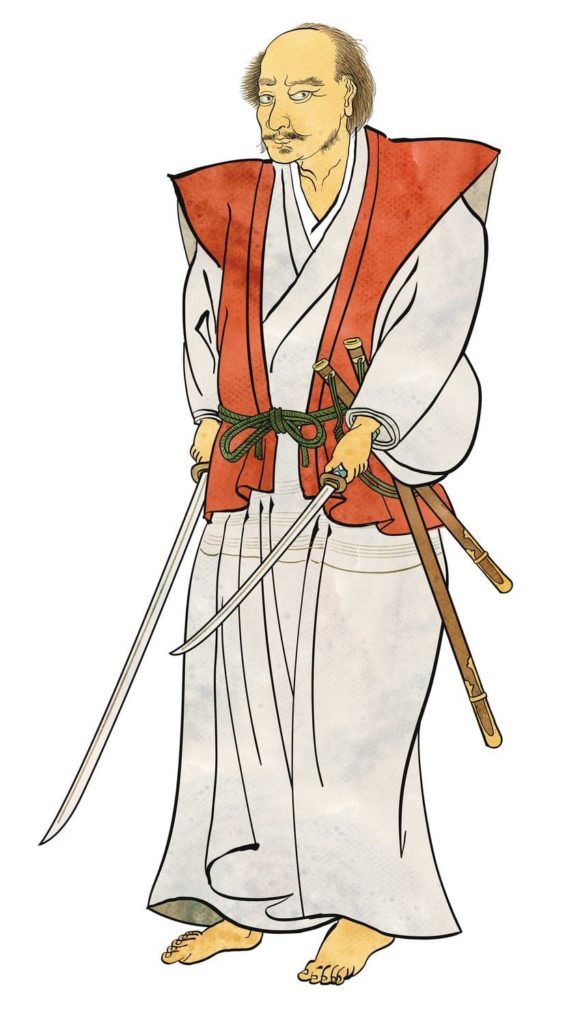 “If you wish to control others you must first control yourself”
“From one thing, know ten thousand things”
“It is difficult to understand the universe if you only study one planet”
“In battle, if you make your opponent flinch, you have already won.”
“Do not regret what you have done”
“If you do not control the enemy, the enemy will control you”
“Respect Buddha and the gods without counting on their help”
“The important thing in strategy is not to suppress the enemy’s useful actions but allow his useless actions”

“Perception is strong and sight weak. In strategy it is important to see distant things as if they were close and to take a distanced view of close things.”
“Accept everything just the way it is.”
“Never let yourself be saddened by a separation.”
“Don’t let your spirit be misled by weak reactions of your body”
“Don’t let the enemy see your spirit, your true face.”

Invoke Fear.
You can invoke fear by making something small appear big or by a surprise attack on the opponents flank.

Mix in.
After strongly striking one of the opponents, face against the other strongest opponent immediately.

Mountain-sea.
Do not use the same techniques over and over in the same fight.
When the opponent is expecting mountain become sea, when expecting sea become a mountain.

Crush the enemy.
When an enemy is defeated he/she usually does not yield at the heart.
Make sure the enemy is beaten at heart and defeated beyond no doubt.
Crush once, crush fast. never let the enemy recover.

Attack first.
If the conflict is unavoidable attacking first is twice advantageous than waiting.

Stand strong.
Hoping and bouncing most of the time is unnecessary as sword fights take place in all sorts of terrains.

Distant-near.
Imagine things far as if they are near and imagine the distant view of things that are near (from above).

Three shouts.
Shout very loudly before the attack, shout “Ei”, when attacking and shout with a low pitch after the victory.

Cut the enemy.
The final goal is cutting the enemy, usually starting from the neck.
No matter how the fight is going, never forget your final goal.

Manipulate timing.
Always control your timing and enemy’s timing.
Musashi many times arrived late on purpose to demoralize the enemy.
By timing he also meant one must look at the enemy and predict the enemy’s next move based on the enemy’s past
movements.

1582. Born in the Harima province in the same year when Oda Nobunaga was betrayed by his assistant and committed seppuku. Later Musashi was adopted by the Miyamoto family.

1594. His first mortal combat against Arima from Shinto-Ryu.

1600. Musashi fought in the battle of Sekigahara on the lines of Kuroda clan from Kyushu.

1610. Killed Kojiro in a duel by using a wooden stick on a small island in Kyushu. His most famous battle.

1615. Joined the summer siege of Osaka as part of the Mizuno clan allied with the Tokugawa side. Osaka castle is burned down, Toyotomi clan terminated.

1617. Became the guest of the Honda clan in Himeji.

1618. Designed the city of Akashi near Kobe.

1632. Relocated to Kyushu from Akashi as a guest of Ogasawara clan.

1640. Became the guest of Hosokawa clan in Kyushu.

Spiritual training - Seishin teki kyoyo Know yourself, your needs and desires Know the nature, environment and the universe Understand the importance of destiny Be in harmony with the nature and society (harmony) Understand others and have empathy (heart) See and observe your en