Geiko is an artist and a professional entertainer who excels in traditional Japanese arts. There are currently around 150 geikos living in Kyoto. People often use the word geiko and geisha interchangeably because these two words mean the same thing except the fact that the word geiko is only used in Kyoto.  First geisha were male and in Tokyo male geishas were called hokan, tayu, taikomochi. On the other hand, in the Kansai region where Osaka and Kyoto are located, people called male geisha simply “geisha” and referred to female geisha as “geiko.” (Sources 1, 2) 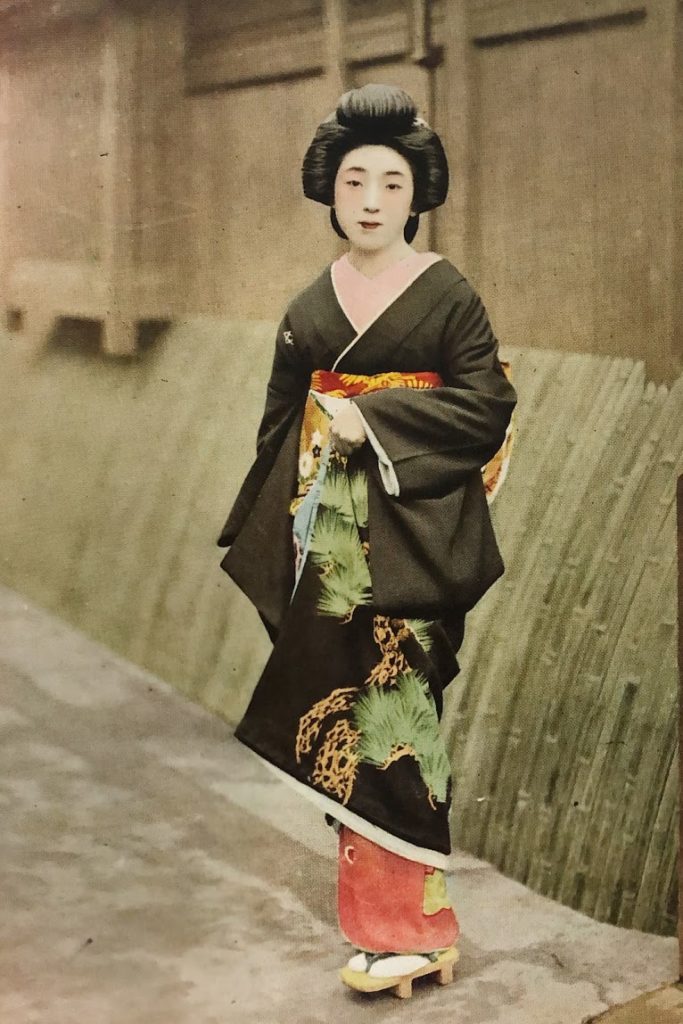 Geiko in front of a Kyoto Machiya, circa early 1900s. Since this photo is a colored automatically, the colors may not reflect the original tones © Maikoya

In English, the word geisha is more commonly used than geiko because the early interactions between the Japanese and foreigners mostly took place in Tokyo and other major port towns outside of Kyoto.

Both the words maiko and geisha first started appearing in the Western literature after the collapse of the Edo Period in 1868 which ended the centuries of self-imposed isolation of Japan. It looks like the word geiko had always been unpopular while the word geisha peaked around 2005 which is right after the movie “The Memoirs of Geisha” was published. This Harper’s Weekly issue, dated July 1879 refers to geisha as “female musicians” while this novel identifies them as “singing girls.”

Let’s just go over the timeline of geisha & geiko history as mentioned in Foreman’s book.

1603 Okuni, who was a maiden in the Izumo Shrine, started performing the Kabuki dance by the riverside of Kamogawa in Kyoto.

1617 In Edo (Tokyo) The pleasure district of Yoshiwara was established. Some kabuki performances were held in Yoshiwara.

1629 Women were prohibited from performing arts in public.

1640 Shimabara pleasure district was established in Kyoto. The houses in Nijo Yanagicho moved to Shimabara.

1751-1764 Yukaku geisha emerges in Yoshiwara. They are prestigious geisha that perform arts but they also occasionally sleep with their guests.

1764-1772 Machi geisha emerges. Machi geisha have instrument playing and singing skills and do not engage in any sexual activity.

1872 After Emperor Meiji came to power, the regulations of the entertainment industry were dramatically revised. The geiko associations and the pleasure districts were clearly separated. The law clarified that geiko by no means engage in any sexual activity.

1872 First public dance performance by the geiko of Gion at the Minamiza Theater in Kyoto. 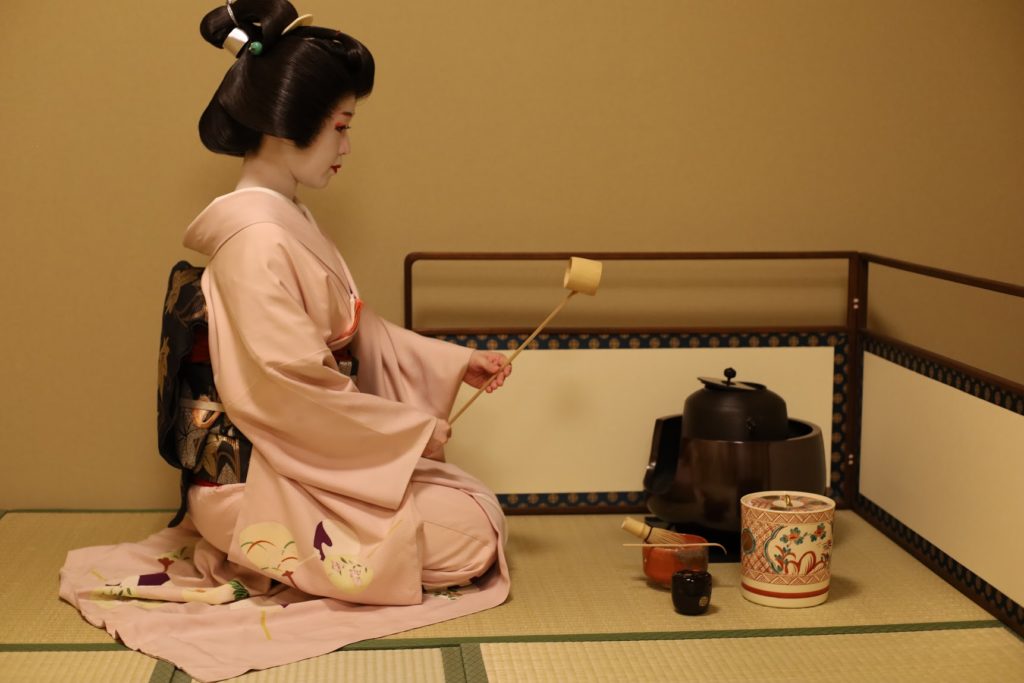 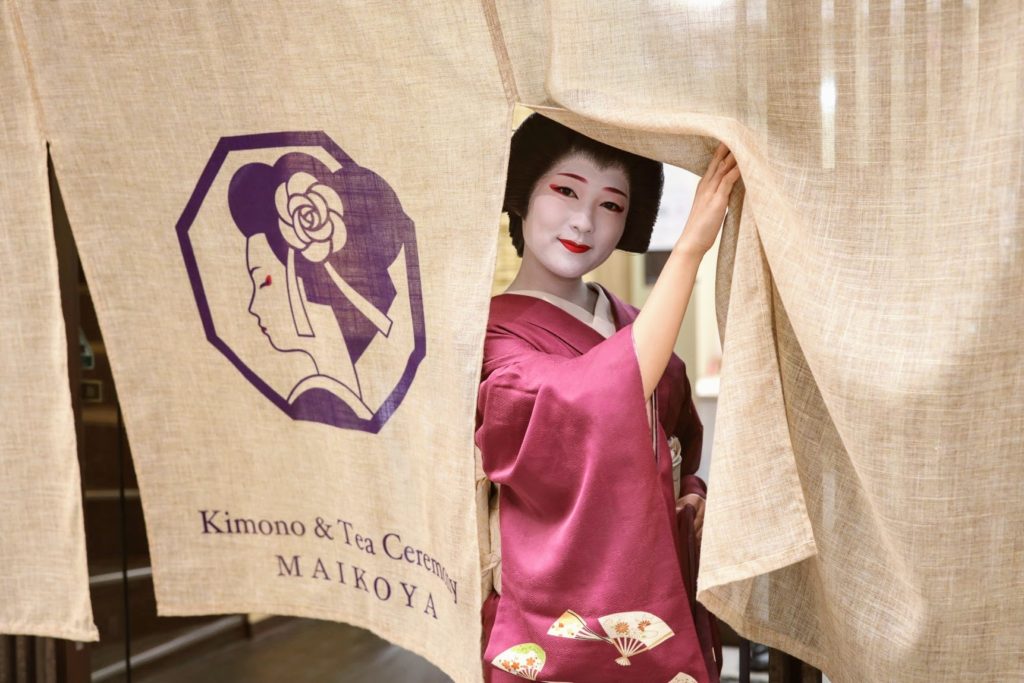 Geiko is exiting a teahouse © Maikoya 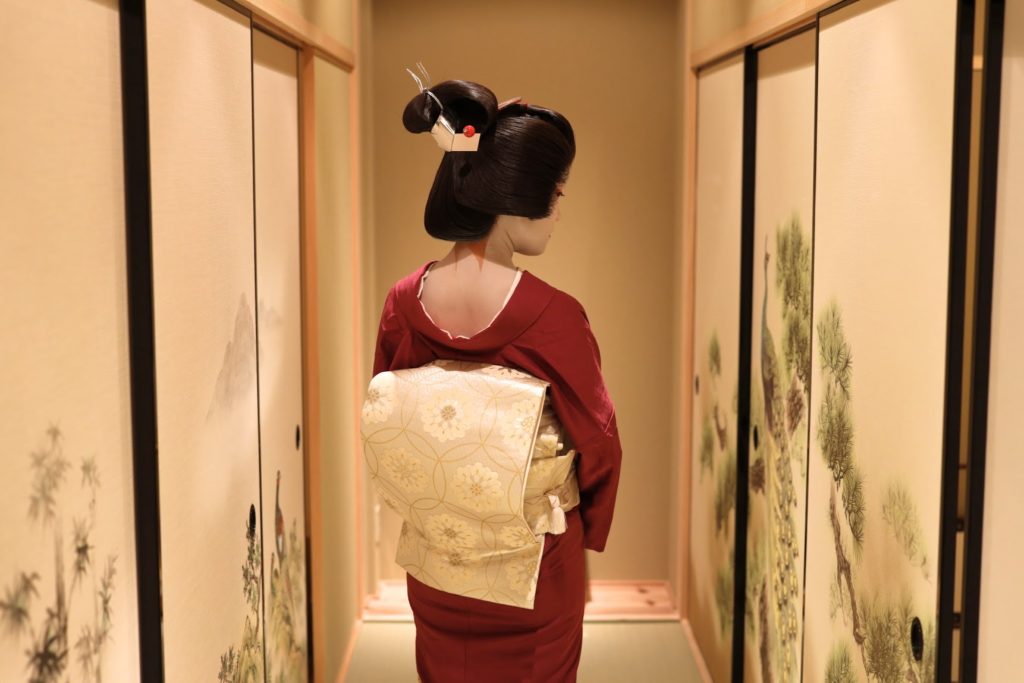 The backside of geiko’s kimono in a hallway © Maikoya

How to become a Geiko

All girls have to go through the 5-year maiko training stage after junior high school to become a geiko. In the past young girls used to be sold to geiko lodging houses (okiya) at the age of 7 but obviously this is illegal today. Read more about the stages of becoming a geiko. 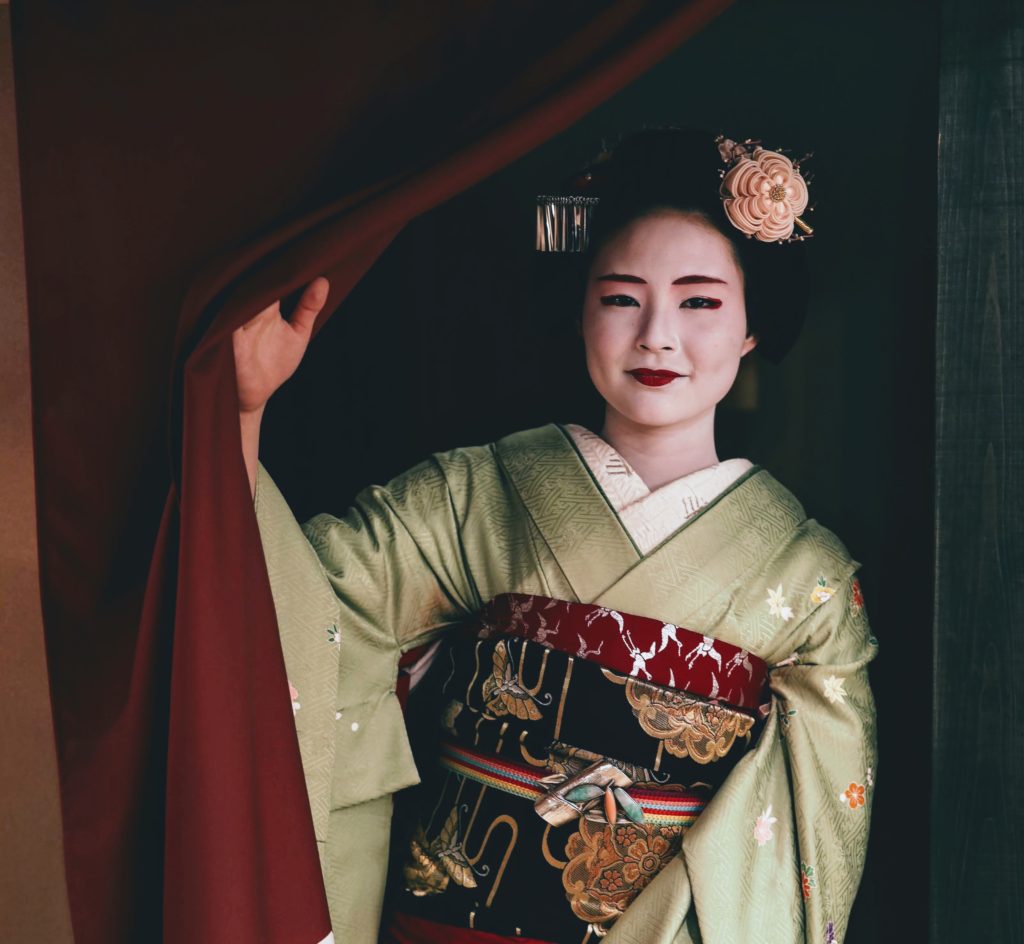 The differences between a geiko and maiko

Geiko is the professional geisha who completed here training in traditional arts and social skills. The geiko in Kyoto can play a shamisen, dance to various rhythms and engage in meaningful conversations with the elite clients from different backgrounds. 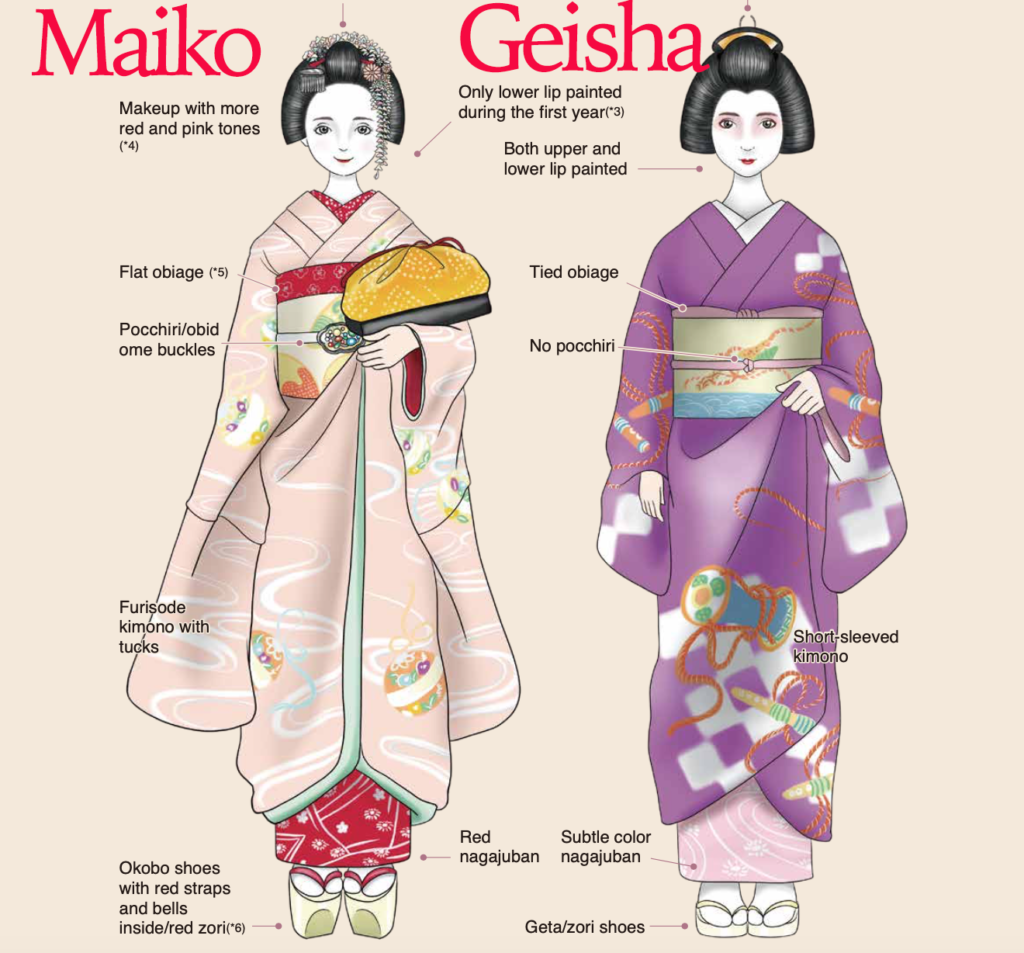 Maiko and Geiko Differences in FRONT

Where to see geiko in Kyoto?

Kyoto has such a rich history of beauty and ritual, as it used to be the capital of Japan over one and a half centuries ago. This is the town where the geiko or geisha profession originated. In the mid-17thcentury, the elite tea houses trained young women to serve a particular type of tea only found in this region. These women soon began entertain guests with other traditional arts such as court dances or playing traditional instruments like the shamisen. 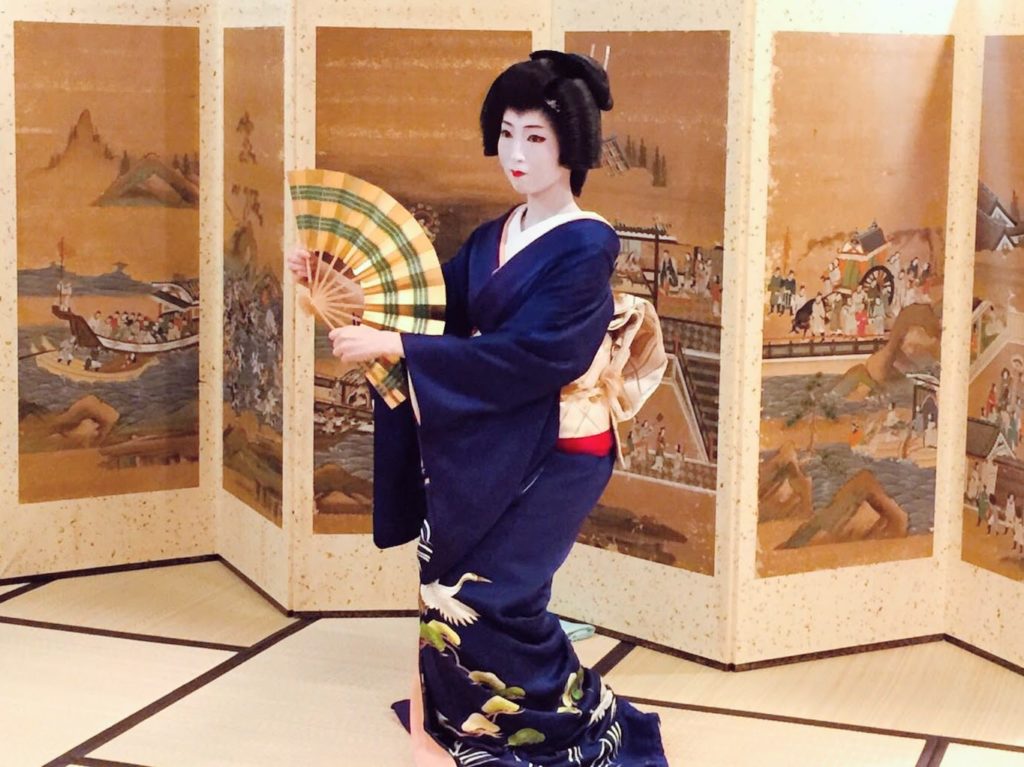 Geiko ladies can still be found in Kyoto today. They continue to give the same high class performances to professionals as they have done for hundreds of years. In keeping with historic traditions, these geikos live and work in the town’s entertainment district. There are still many Geiko tea houses that continue the original hosting duties that the geikos have become famous for. 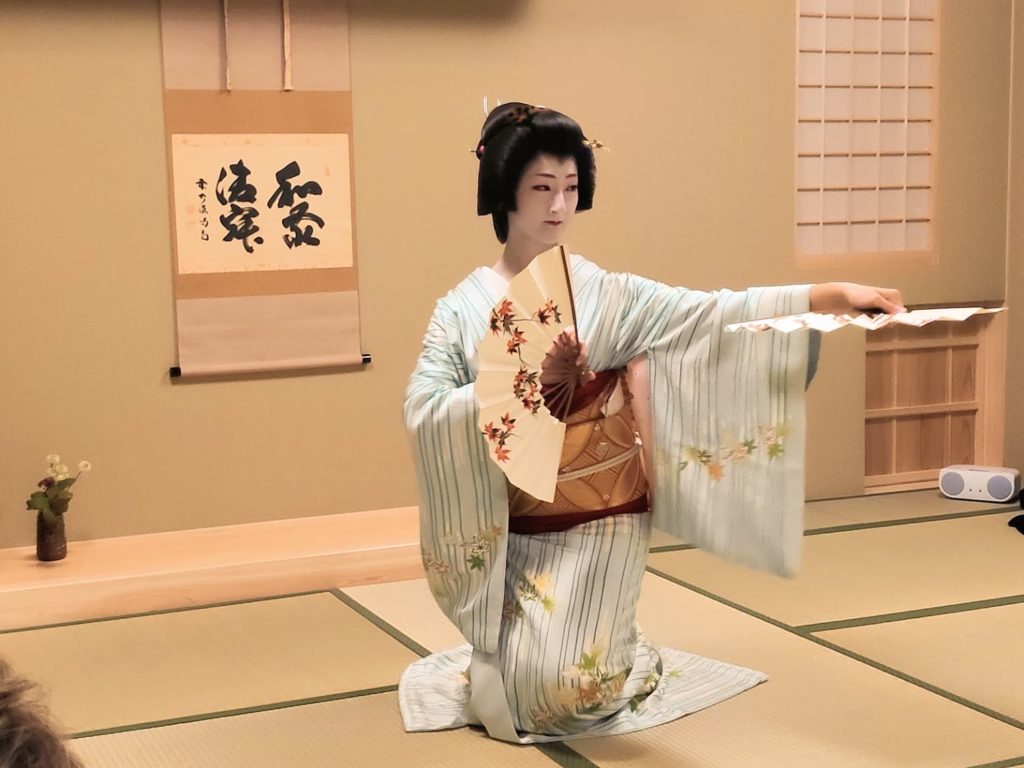 The main geiko entertainment district in Kyoto is known as Gion. It has been split into two communities: Gion Kobu and Gion Higashi. Both have been declared an area of natural history preservation. This means that efforts have been put in keeping the houses and buildings in the area the same as they have been when Kyoto was the capital in the Edo Period. 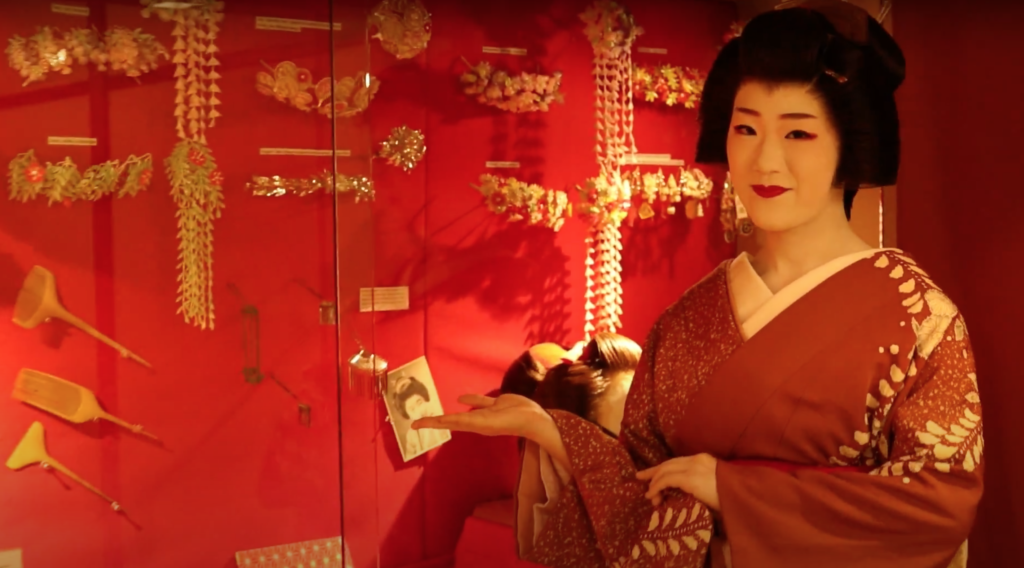 Geiko at the geisha museum by Maikoya Gion

There are three main attractions of Gion that highlight the presence of the geikos that work there. The first of course is the teahouses that have become forever linked to these lady entertainers. Many are very exclusive, though visitors and tourists can organise a reservation through the concierge at their Kyoto hotel. If you can arrange a stay at a traditional Kyoto inn house like Hiiragiya or Tawaraya, they have special packages where geikos will host a meal for you and your family or friends. 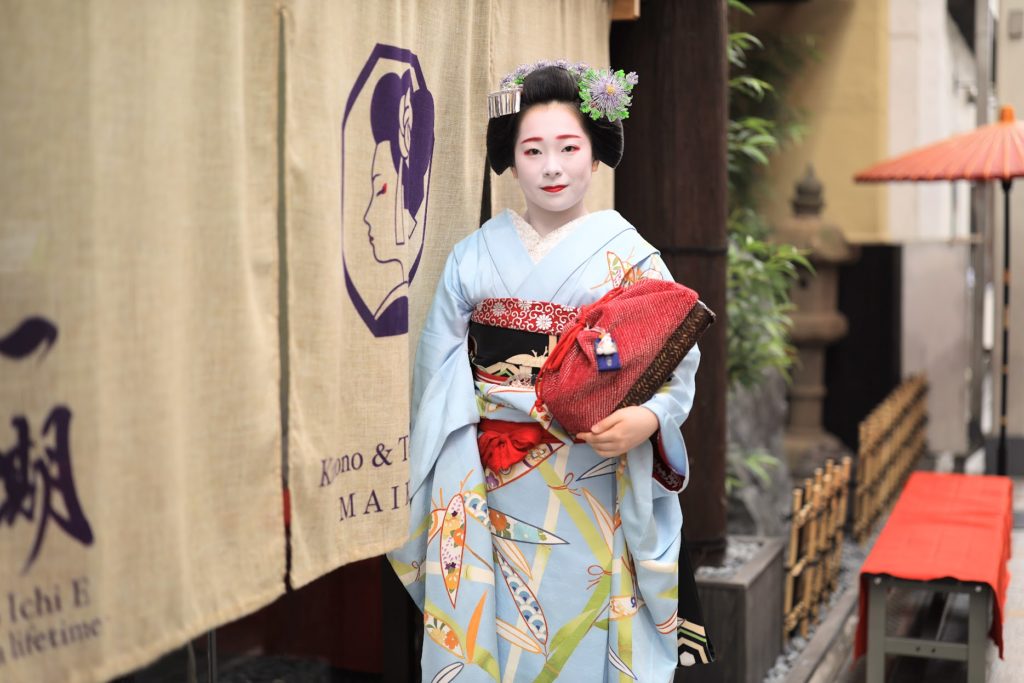 Another location is the traditional theatres in the Gion district. Though some only perform in Japanese, some do have English brochures that describe the finer details in the art demonstrated by the geikos and maikos. The most popular for tourists is Gion Corner. The geikos and maikos there will demonstrate a cultural activity such as playing a traditional instrument, a play or even a delicate flower arrangement. At the end of the performance, a group of maiko will perform a time-honoured dance. Earphone guides are available so you can appreciate these pieces fully. 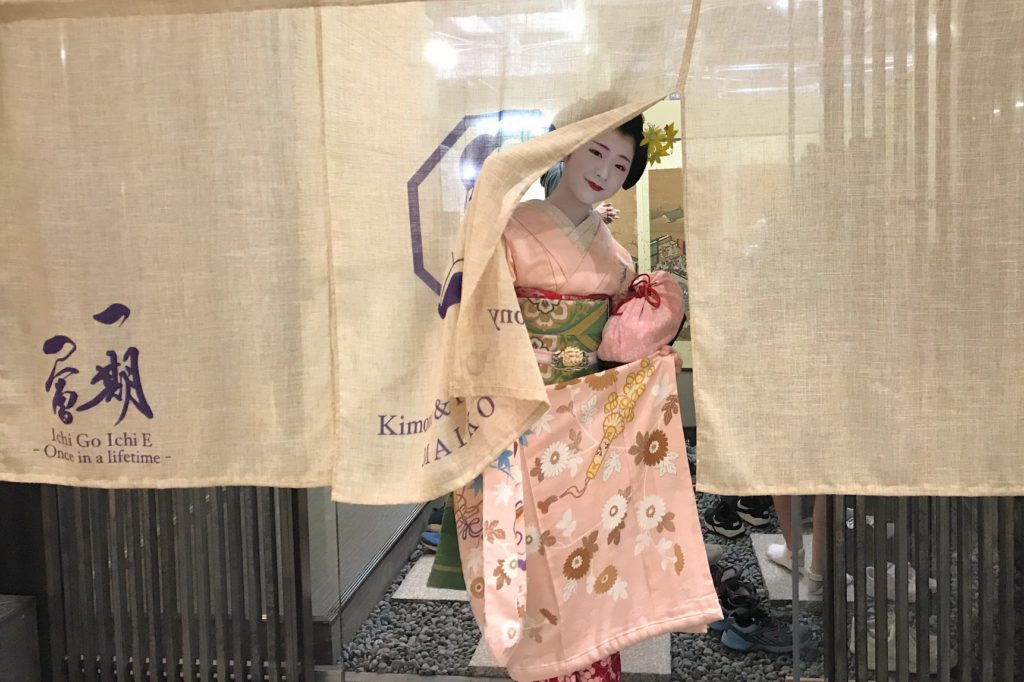 Where you can meet famous geikos?

The final setting in Kyoto where you can see the famous geikos is during annual festivals. Geikos and maikos perform traditional dances during certain celebrations at a set location. The biggest is the Miyako Odori, which translates to ‘The Dance of the Old Capital’. This is performed at the Kaburenjo Theatre, and has been performed every April for the cherry blossom season since 1873. This is quite popular so it is important to book seats quickly if you wish to attend. There is a smaller dance during November called the Gion Odori. This is celebrating the leaves changing for autumn, though there are fewer performances at the Kaburenjo Theatre.

Bardsley, J. (2010). Teaching Geisha in History, Fiction, and Fantasy. ASIANetwork Exchange: A Journal for Asian Studies in the Liberal Arts, 17(2). Retrieved from