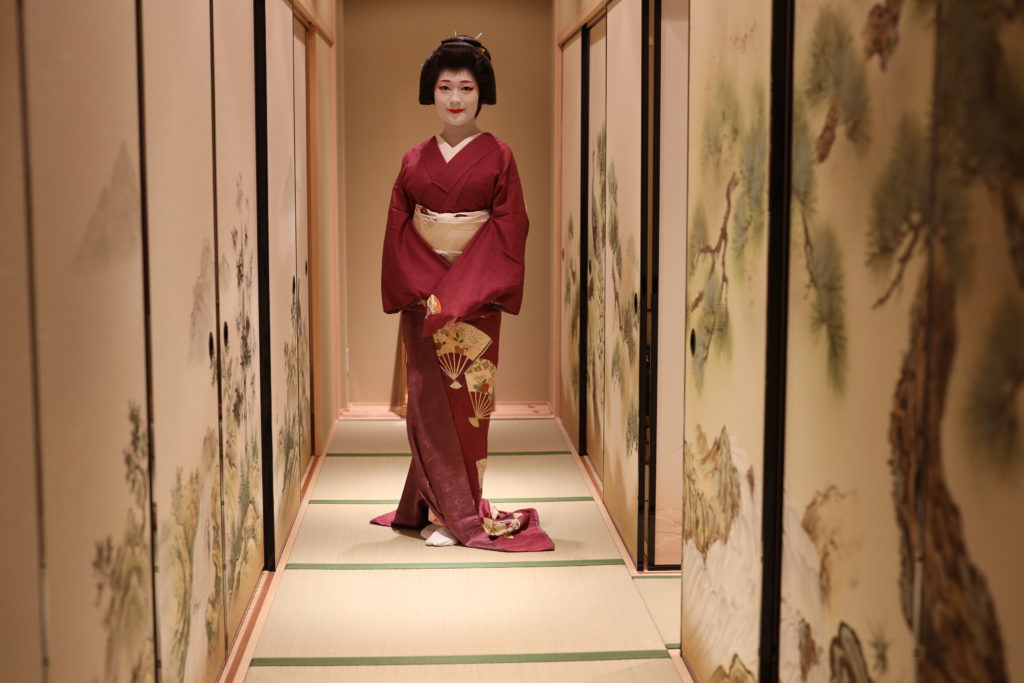 When the geisha profession began the apprentice maiko were often as young as 8 or 9 years old. Like other girls their age, they wore long-sleeved kimono with special tucks placed in the shoulders, called Kata Age (肩上げ), and the sleeves, called Sode Age (袖上げ), so that they could grow into them. Although no longer needed, maiko continue to wear kimono with these tucks to this day to show that they are still children. The long sleeves, known as Furisode (振袖), are worn by young, unmarried women as a sign that they’re available for marriage. It’s said that the sleeves are long so that they will catch the eye of a potential suitor.

In contrast, geisha wear kimono with shorter sleeves called Kosode (小袖), which is a sign that they are mature women who no longer need to grab attention with their flashy outfits.

Both wear a special type of kimono called a Hikizuri (引き摺り), which refers to the kimono’s extra long hem that allows them to wear it while dragging along the floor. During the Edo Period, it was fashionable to allow your kimono to drag along the floors of houses as a sign of grace and prestige, and so this tradition has been kept by geisha and maiko. Each hikizuri is an average of 200 centimetres/79 inches or longer in length so that they can trail no matter the height of the wearer. When not in an ochaya setting geisha and maiko will tie up or carry the hems of their kimono in their left hand so as to not let it drag along the ground outside. Often times a hikizuri will have a second hem attached called a Hiyoku (比翼) to prevent the main part of the kimono from becoming dirty. The hiyoku can then be switched out and cleaned when necessary.

When it comes to special events, such as misedashi and erikae, geisha and maiko will don the most formal outfits that their okiya owns called Kuromontsuki (黒紋付). Meaning “Black Crested Garment,” it is a black kimono that features five of the okiya’s crests and lucky motifs. Such common motifs include cranes for fidelity, turtles for longevity, and pine trees for strength.

Geisha and maiko will switch kimono

During the year geisha and maiko will switch between thick and thin kimono in order to adapt to the fluctuating temperatures. From October to May they will wear kimono made from thicker silk that’s lined in lighter silk called Awase (袷). During the summer months of June to September, they will wear kimono made from light silk that features no lining called Hitoe (単衣).

Outside of ochaya geisha and maiko wear casual kimono called Komon. The name refers to the small repeating patterns, Ko (小) meaning “Small” and Mon (紋) meaning “Symbol” or “Motif,” which are akin to jeans and a t-shirt in the West. To tell geisha and maiko apart there will be kata age present on a maiko’s komon kimono.

The patterns and motifs found on kimono also change to match the seasons. From October to May, known as the All Season time, various plants that are prominent during these months can be found on kimono. Such common motifs include chrysanthemums, plum blossoms, pine trees, bamboo, maple leaves, butterflies, and cherry blossoms. From June to September, known as the Summertime, common motifs include hydrangeas, flowing water, reeds, fireworks, bellflowers, and dragonflies.