Ryokans are traditional inns unique to Japan and offer rich cultural experiences and relaxation to its guests. These Japanese inns are known to cater to the guests’ every need and serve kaiseki meals that are meticulously prepared by the finest chefs in the business. There are a number of ryokans, high-end and budget-friendly, in the Kyoto area because of its history as a vacation spot to the Japanese Imperial Family throughout history. 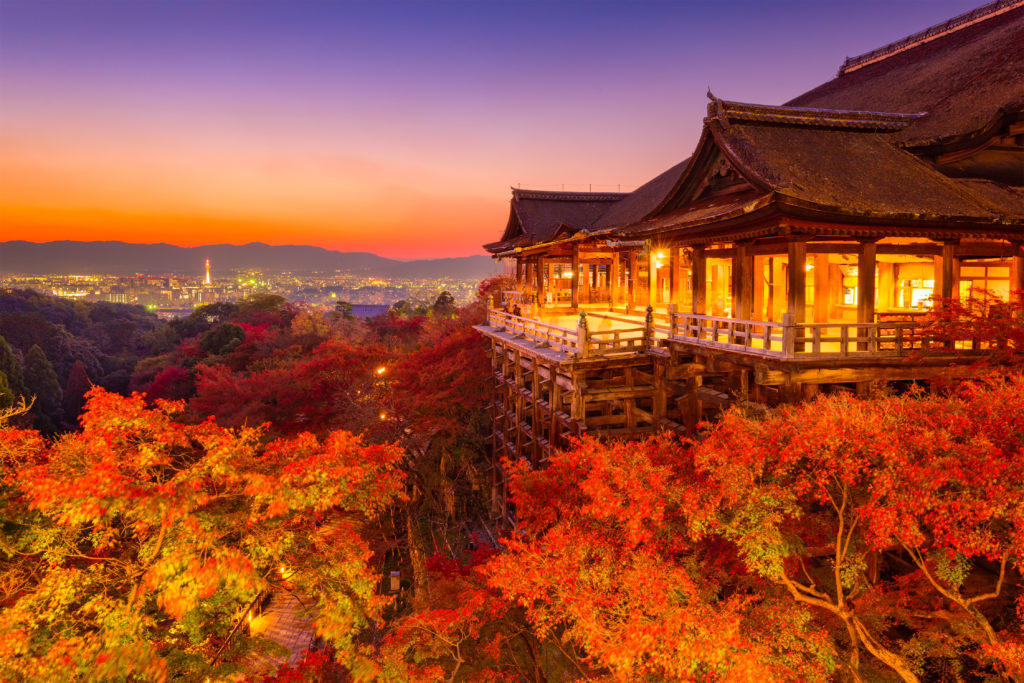 The experience of staying at a ryokan is unlike that of staying at a standard hotel–besides the aesthetic, the staff at any given ryokan follow a certain standard of service that makes guests feel well-taken care of. The quality of the food greatly contributes to this as well, with kaiseki meals served for lunch or dinner that shows off the freshest local ingredients that the inn can provide, each dish prepared by a highly qualified chef along with the impeccable presentation that is highly praised by foodies alike.

Kyoto has a rich ryokan culture and preserved traditions which are prevalent in the ryokans all over the prefecture. Here, we have compiled ten of the best according to customer reviews and recognition over the years. 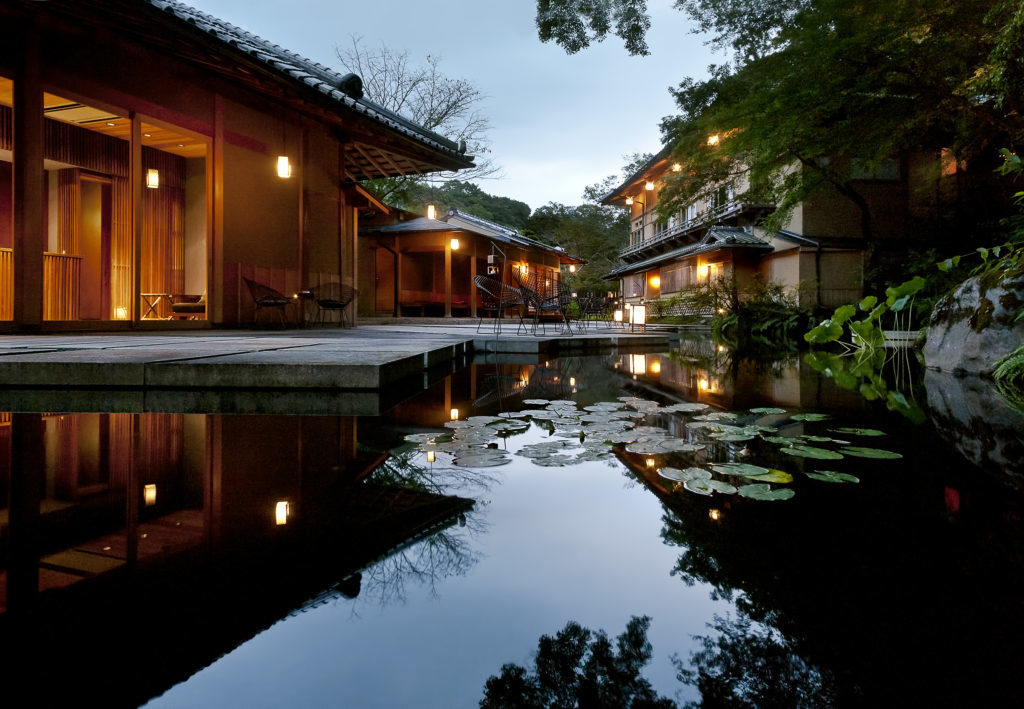 Hoshinoya Kyoto is a traditional Japanese inn converted from the home of Ryoi Suminokura, a wealthy merchant. The ryokan is located in Nishikyo, on the riverbanks of Ōi River, just a short distance from the Arashiyama Bamboo Forest. This Hoshinoya property on this list is also the second ryokan that the resort chain has opened, the first one being Hoshinoya Tokyo. 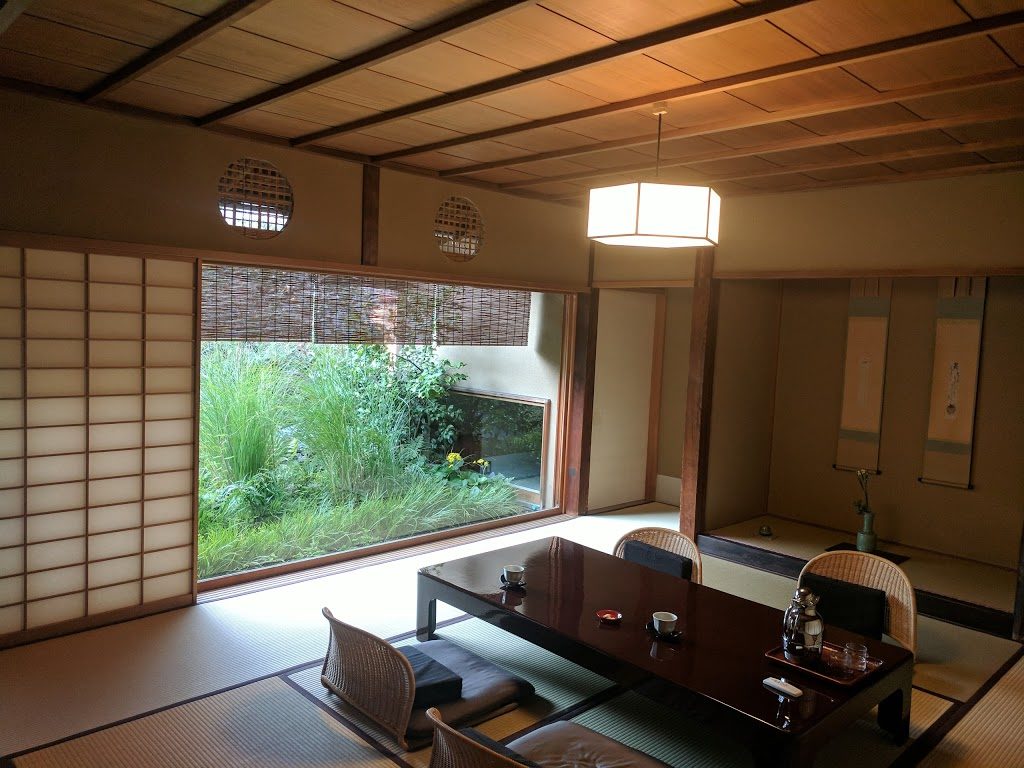 Tawaraya Ryokan is considered one of the finest, if not the finest, in Kyoto and perhaps all of Japan. The 300-year-old Japanese inn is the oldest in Kyoto and has since been frequented by people of prominence–one of which was Steve Jobs. Tawaraya has a reputation for its high quality, attentive, and personalized service that has stemmed from accommodating aristocrats back in the Edo Period, leaving no space for compromise in their services and dining experience.

Tawaraya is renowned for its relaxed atmosphere in their traditional and contemporary Japanese-style rooms, and Japanese garden, and is praised as a “home away from home”. The ryokan also serves expertly prepared meals that feature seasonal and local ingredients.

The luxurious Japanese inn is ideally located in the city center, right in the heart of Nakagyo, Kyoto, making it a perfect spot to relax after exploring the bustling city. A dip in the private onsen baths and enjoying a kaiseki dinner and service is sure to melt away the exhaustion and worries of travel and work. 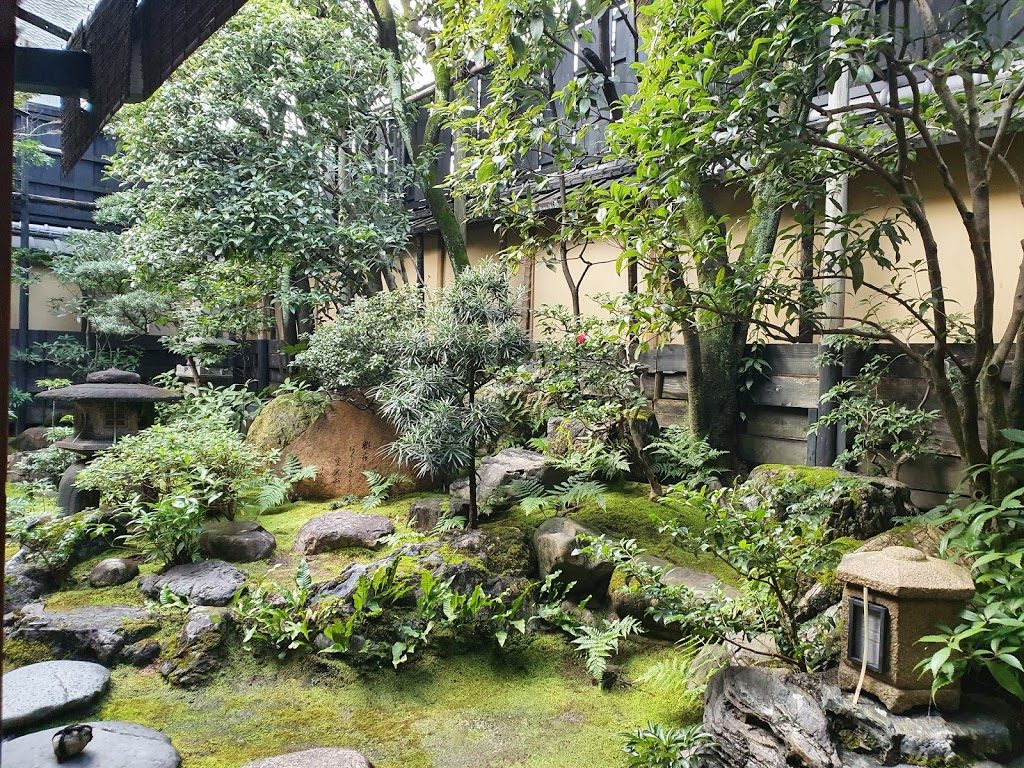 Hiiragiya Ryokan is one of the oldest and most beloved inns in Japan. The traditional inn has been hosting prominent personalities–writers, artists, and politicians, as well as members of the Imperial Family, since its establishment in 1818. Notably, Nobel Prize-winning novelist Yasunari Kawabata, and noted author Junichiro Tanizaki, consider Hiiragiya as their “home away from home”, as well as celebrities such as Charlie Chaplin and Elizabeth Taylor.

Like any long-standing Japanese inn, Hiiragiya has been managed by the same family for generations.

The rooms of the traditional inn have preserved its initial sophisticated design and architecture from the late Edo Period, with modern conveniences cleverly hidden among its wooden compartments. Staying in any of the rooms ensures comfort and relaxation, with the inn’s staff providing unparalleled attention. The rooms feature a beautiful view of the rock, bamboo, and sakura garden.

The Japanese inn also makes use of the “wabi-sabi” design in its old wing and a more chic take on their newer wing.

Hiiragiya is highly praised for its quality service and hospitality. The Japanese inn serves its guests a colorful kaiseki dinner that’s meticulously prepared by the ryokan’s expert chef, as well as a selection of wines, sake, and spirits.

Hiiragiya Ryokan is conveniently located in Central Kyoto, just a short stroll from Kamo River, and is surrounded by the Gion district where you can find an abundance of geisha culture. 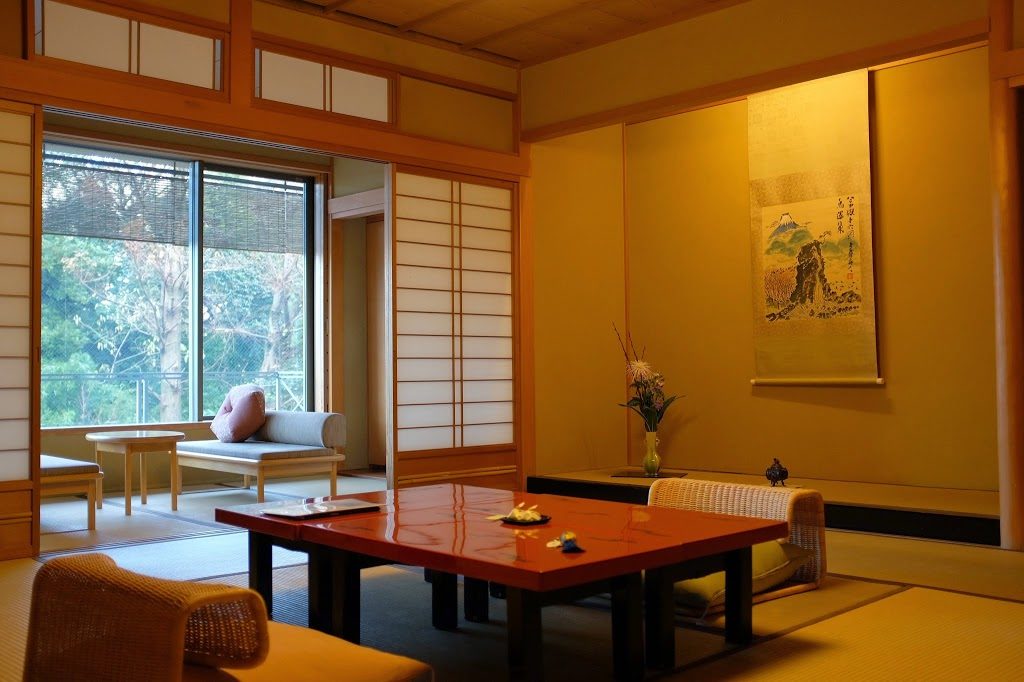 Located right in the heart of a district that treasures geisha culture, Gion Hatanaka stands out from the list of ryokans as it offers maiko evenings and regular geisha entertainment where guests can observe the traditional dances and performances. If you’re a fan, this is the place for you to play maiko drinking games first hand, and learn about the samurai and sword dancing.

Arashiyama Benkei is a traditional Japanese ryokan located along the banks of Katsura River, in western Kyoto. It’s the perfect walking distance from the main tourist attractions in Arashiyama, making it a great stay for those who wish to explore the town. Historically, the town of Arashiyama served as a resort for aristocrats and royalty. Today, the scenic place serves as a getaway spot for tourists, both local and international alike, and Arashiyama Benkei welcomes all guests with Japanese hospitality.

Arashiyama Benkei offers a selection of 12 rooms, some of which will include their own private onsen, but all of them with a scenic view of either the river or the gardens. There are also two separate indoor baths for men and women, and reservable private baths for groups.

Arashiyama Benkei has been recognized for its exceptional service and has been awarded multiple accolades including the Traveler’s Choice Award by TripAdvisor from 2017 to 2019, and was listed in the Top 25 Japanese Ryokan/B&B accommodation. 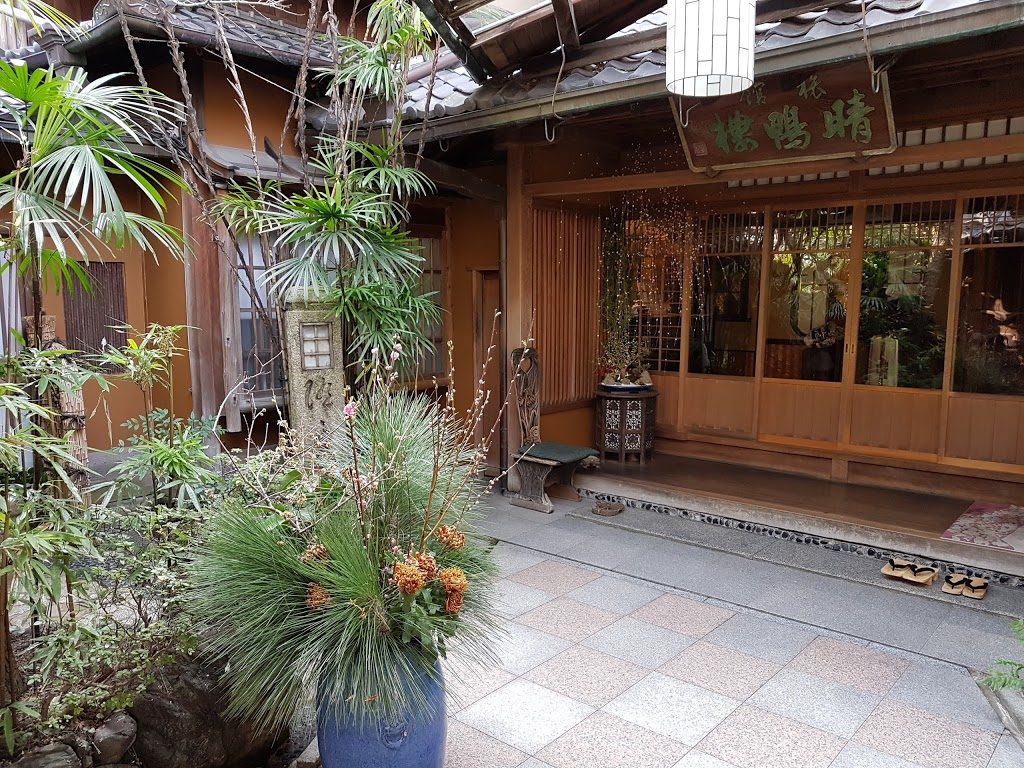 Established in 1832, Seikoro Ryokan or Seikoro Inn started as a lodging stop for travelers on their journeys in Kyoto, and eventually evolved into the traditional inn it is today. Seikoro Ryokan has since been run by the same Japanese Family, and maintained its quality service, earning its place as one of the top ryokans in Kyoto.

The cozy Japanese ryokan is known for its exceptional hospitality and attentive service. The guest rooms have since been refurbished to incorporate more modern elements and comforts, with a sitting area that offers views into its delightful garden. That staff’s attention to detail during a stay is sure to impress along with the multi-course kaiseki dinner.

After dinner, you’ll want to soak in its relaxing baths. The cypress and pine baths facing the garden will give a luxurious feel and bring on a relaxing experience like no other.

Seikoro Ryokan is also ideally located near historical sites like Kiyomizu, a temple that has been declared as a World Heritage Site.

If you plan on staying here and have a pet, Seikoro Ryokan also welcomes furry guests provided they are small and will not disrupt the stay of the other guests. 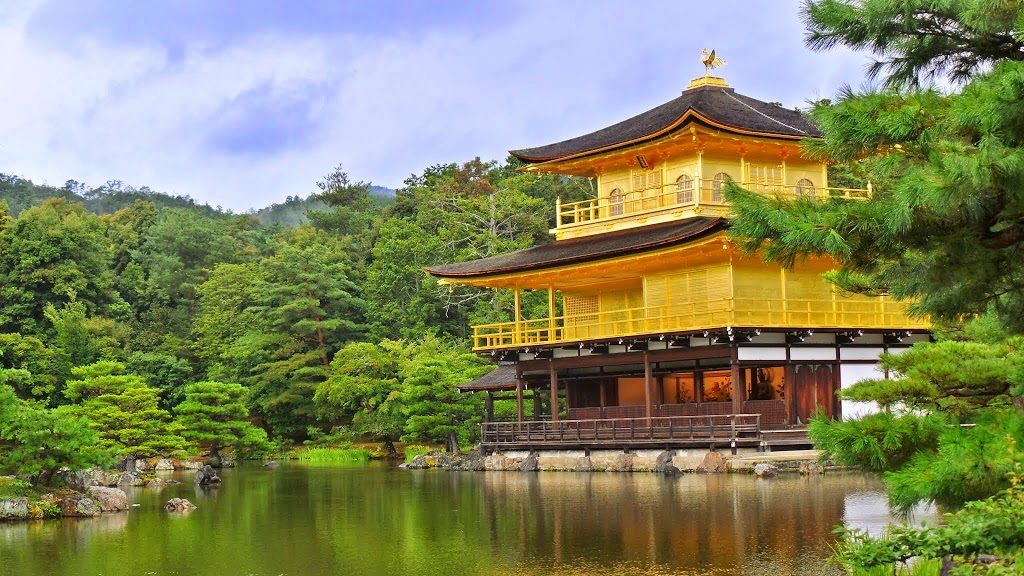 Matsubaya Ryokan is a traditional Japanese inn established way back in 1884 and is located in the heart of Shimogyo Ward in Kyoto. The inn is highly recommended for its prime location, close to the many city attractions that Shimogyo has to offer, in a way that doesn’t deplete your savings.

The Japanese inn offers recently renovated rooms fitted with tatami mat flooring and futon beds. You’ll even get to don yukata robes during your stay. Matsubaya Ryokan prides itself on giving its guests an authentic Japanese experience and is especially welcoming to first-timers at a ryokan and international tourists.

Matsubaya Ryokan has earned its place in the TripAdvisor Hall of Fame in 2015, and a Certificate of Excellence for its exceptional service and customer satisfaction.

Ryokan Izuyasu is a traditional, cozy ryokan that was built in 1839. Its interiors and design feature traditional Japanese and Kyoto charms, with guest rooms fitted with tatami mats, shoji paper screens, and futon bedding.

The atmosphere in Ryokan Izuyasu exudes an atmosphere that makes it feel as if you were transported back in time. The inn serves its guests Japanese cuisine for breakfast and dinner, including a multi-course kaiseki meal.

Ryokan Izuyasu’s location offers many sightseeing opportunities. When staying here, you can explore nearby attractions such as the Higashi-Hongan-ji Temple, the Kyoto Tower, Kyoto Porta, and the Toyokuni Shrine.

Momijiya Bekkan Kawa no Iori is an onsen ryokan located in the picturesque Takao Onsen in Kyoto. The inn features well-preserved traditional Japanese elements that blend harmoniously with the surrounding nature. Momijiya Ryokan has been praised for its beautiful location in Takao, which is known for its streams, woodland, and fireflies.

To get to the ryokan, you have to cross a suspension bridge–a memorable experience that will make the inn stand out as one of the most scenic trips you’ll take to a ryokan. The rooms at Momijiya Ryokan feature tatami mat flooring, and futon bedding, as well as sitting areas and wide windows that look out into the river.

There are also hot-spring baths in select rooms and large communal baths available for men and women to enjoy separately, and some baths for group or individual reservation.

In the summers, dinner is served in the inn’s restaurant, “Kawadoko”, where maikos would serve guests and give performances.

If you’d like a change of scenery, there are nearby attractions including the Jingo-ji Temple, and the Kozan-ji Temple. 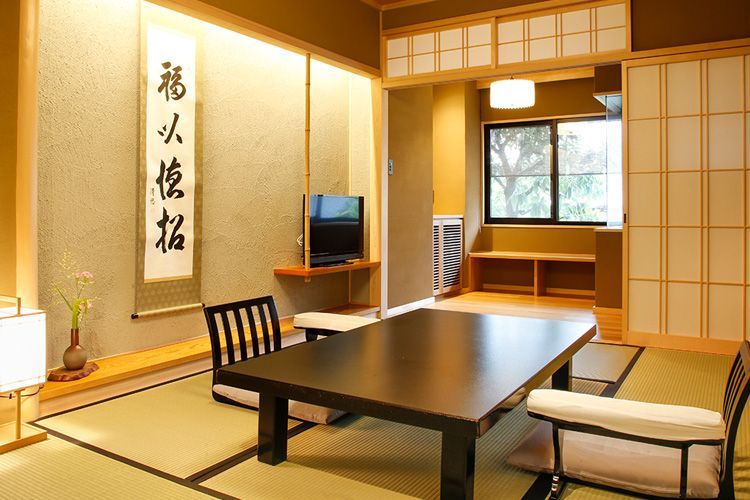 Togetsutei was founded in 1897 and has since maintained its traditional Japanese interior and hospitality service. The ryokan is located in the famous Arashiyama onsen in Kyoto Prefecture, where tourist spots like the Arashiyama Bamboo Forest can be found. The inn features a top-class Kyoto cuisine dinner, elegantly displayed and served to the guest rooms.

Togetsutei provides guests with traditional Japanese rooms with wooden accents, tatami mats, shoji screens, and futon beds. Some rooms will have an attached private hot-spring bath or an open-air spa. In addition, there are also hot-spring baths outside the guest rooms including a gender-segregated bath, a mixed bath, and reservable private baths for individuals or groups.