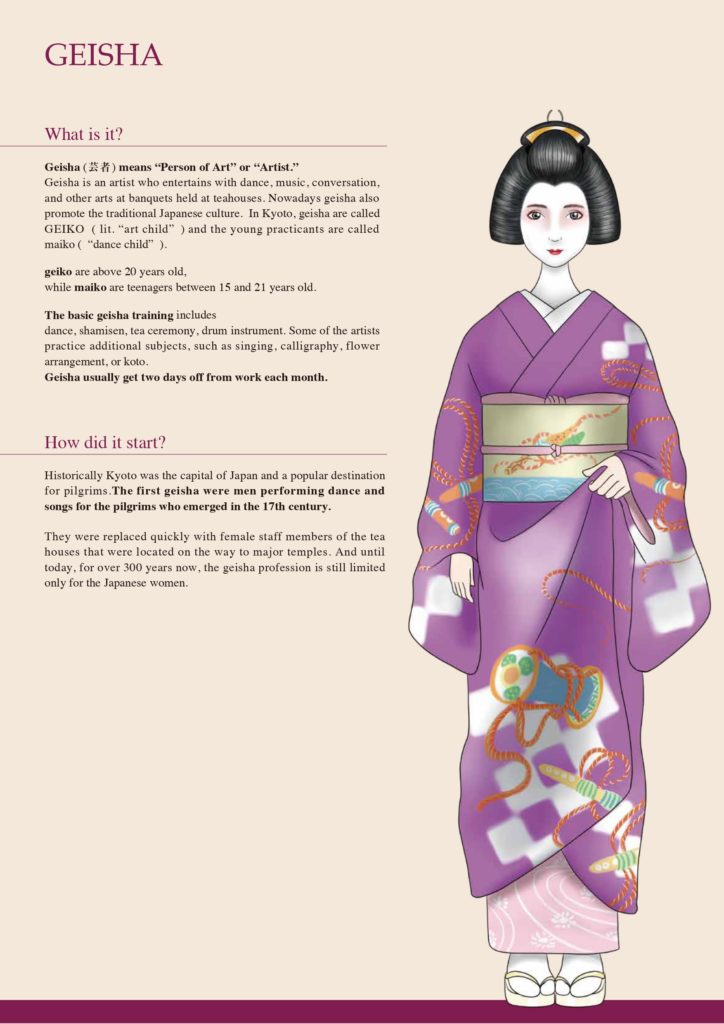 Geisha (芸者) means “Person of Art” or “Artist.” While these terms are quite vague, they have come to be identified with highly trained women who entertain exclusive clientele in special districts. Each geisha is registered to work in a Hanamachi (花街), which means “Flower Town,” and will live and train in these districts while they remain active in the profession.
Geisha will take classes in various art forms six days a week and get two days off from work each month. 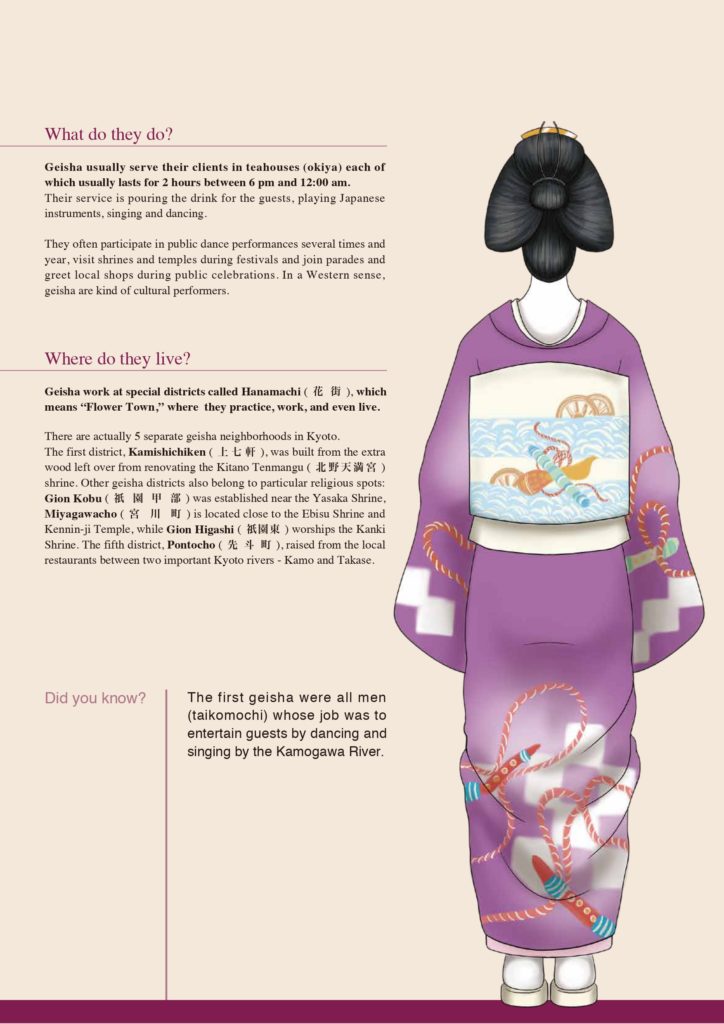 Geisha is an artist who entertains with dance, music, conversation, and other arts at banquets held at teahouses.
Nowadays geisha also promote traditional Japanese culture. In Kyoto, geisha are called GEIKO ( lit. “art child” ) and the young practicants are called maiko ( “dance child” ).

Geiko are above 20 years old, while maiko are teenagers between 15 and 21 years old. Differences between maiko (junior geisha) and senior geisha

How to Become a Geisha, Training of a Maiko 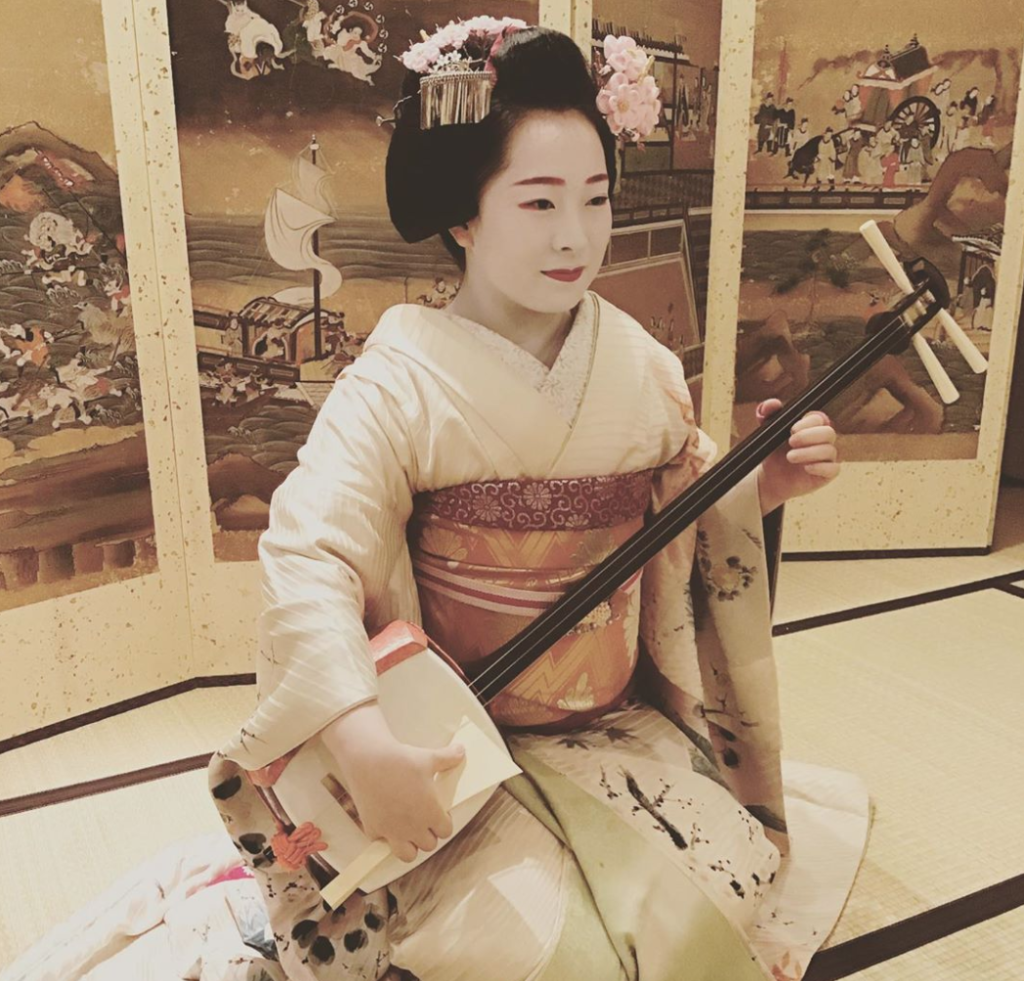 Their profession came about during the early Edo Period (1603-1868) when the shogun-ruled government began to allow individuals to travel on pilgrimages to the great shrines around the country. Kyoto was the capital of the country at the time and was a popular destination for its many large shrines and gorgeous landscapes. The first district, Kamishichiken (上七軒), was established from the extra wood leftover from rebuilding the Kitano Tenmangu (北野天満宮) shrine. The shogun at the time, Toyotomi Hideyoshi (豊臣秀吉), held a great party in the area and gave his consent for the district to operate under the government’s orders. He loved the dango (sweet rice on skewers) so much that he allowed Kamishichiken the use of it as their personal symbol.

One of the most popular shrines in Kyoto is the Yasaka Shrine (八坂神社) located on Shijo Dori. To take advantage of the new influx of tourists small snack houses sprung up around the shrine. Eventually, they became the tea houses that we know today and were packed with tourists and locals all day long. The districts of Gion Kobu (祇園甲部), Gion Higashi (祇園東), Miyagawa Cho (宮川町), and Pontocho (先斗町) were established from these tea houses.

The first geisha to appear were men who entertained groups of people enjoying parties at these establishments by telling lewd jokes and singing popular songs. However, the female serving girls of these establishments began singing and dancing for these customers too and eventually displaced the male geisha as they were far more popular with the mostly male clients. These women then became recognized by the government as an official profession and thus the geisha we know today were born. Their profession has largely stayed the same for the past 300 years and is continuing to stay strong amidst global change.

Historically Kyoto was the capital of Japan and a popular destination for pilgrims. The first geisha were men performing dance and songs for the pilgrims who emerged in the 17th century.

They were replaced quickly with female staff members of the tea houses that were located on the way to major temples. And until today, for over 300 years now, the geisha profession is still limited only to Japanese women.

Geisha usually serve their clients in teahouses (okiya) each of which usually lasts for 2 hours between 6 pm and 12:00 am.
Their service is pouring the drink for the guests, playing Japanese instruments, singing and dancing.

They often participate in public dance performances several times and year, visit shrines and temples during festivals and join parades and greet local shops during public celebrations. In a Western sense, geisha are a kind of cultural performer.

There are actually 5 separate geisha neighborhoods in Kyoto.
The first district, Kamishichiken ( 上 七 軒 ), was built from the extra wood left over from renovating the Kitano Tenmangu ( 北 野 天 満 宮 ) shrine.

What are the similarities between geisha and sumo: Most sumo wrestlers weigh around 150 kgs, the weight of the maiko’s clothing during the winter time is around 15 KGS!!!
Japan Travel and Culture Guide 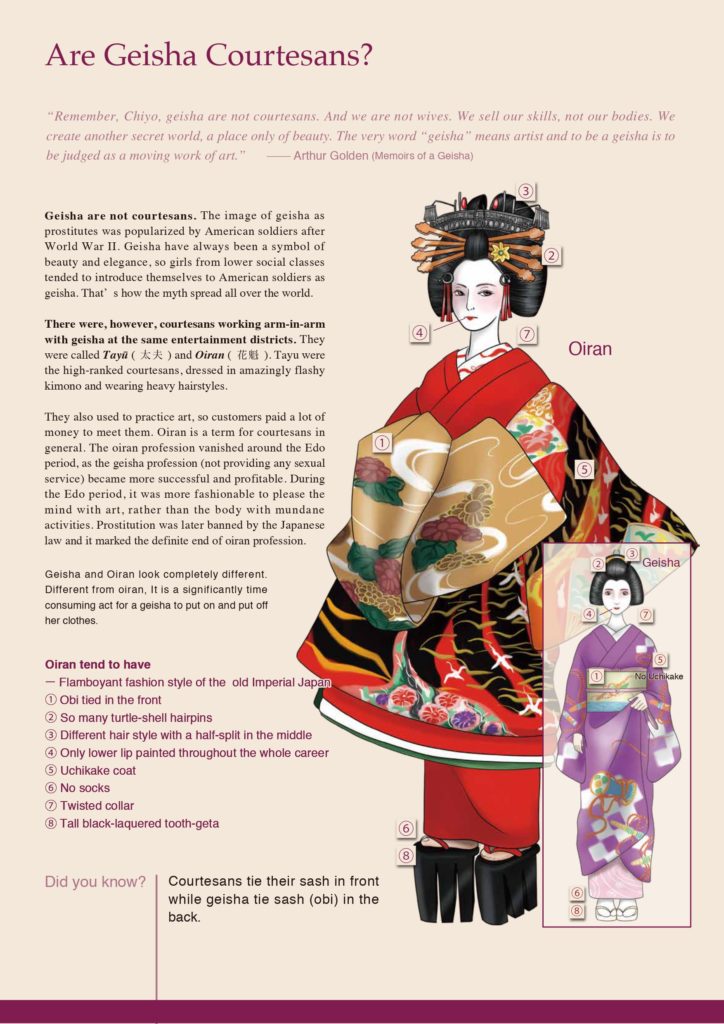 “Remember, Chiyo, geisha are not courtesans. And we are not wives. We sell our skills, not our bodies. We create another secret world, a place only of beauty. The very word “geisha” means artist and to be a geisha is to be judged as a moving work of art.” ― Arthur Golden (Memoirs of a Geisha)

Geisha are not courtesans. The image of geisha as prostitutes was popularized by American soldiers after World War II. Geisha have always been a symbol of beauty and elegance, so girls from lower social classes tended to introduce themselves to American soldiers as geisha. That’s how the myth spread all over the world.

There were, however, courtesans working arm-in-arm with geisha at the same entertainment districts. They were called Tayū ( 太夫 ) and Oiran ( 花魁 ). Tayu were the high-ranked courtesans, dressed in amazingly flashy kimono and wearing heavy hairstyles.

They also used to practice art, so customers paid a lot of money to meet them. Oiran is a term for courtesans in general. The oiran profession vanished around the Edo period, as the geisha profession (not providing any sexual service) became more successful and profitable. During the Edo period, it was more fashionable to please the mind with art, rather than the body with mundane activities. Prostitution was later banned by Japanese law and it marked the definite end of the oiran profession.

Geisha and Oiran look completely different. Different from oiran, It is a significant time-consuming act for a geisha to put on and put off her clothes. 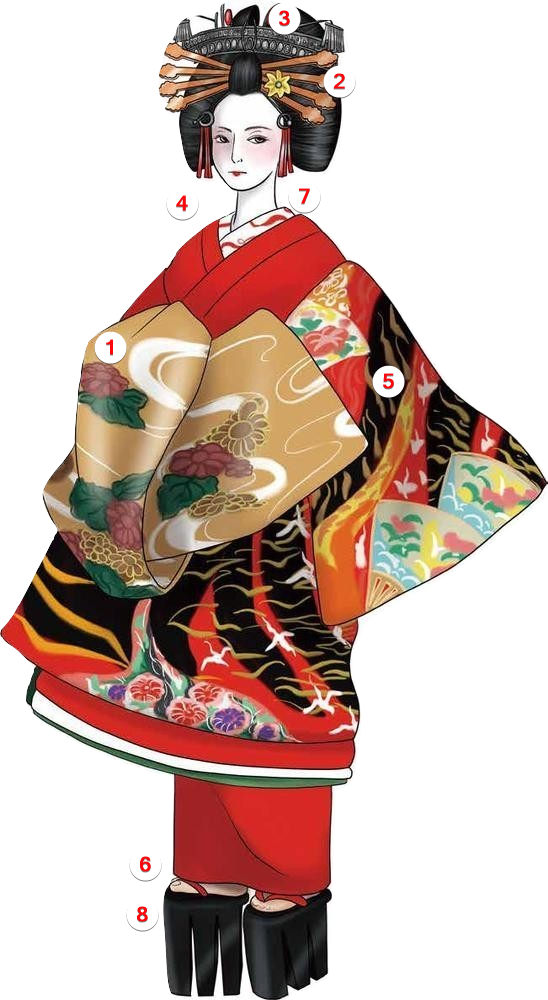 Oiran tend to have

Courtesans tie their sash in front while geisha tie sash (obi) in the back.
BACK TO Geisha Experience Reservation Page

How to Put on Makeup Like a Maiko A Maiko is a label for a lady who is studying to be an entertainer in Kyoto, fully trained in Japanese time-honoured arts. She typically puts on makeup to make her skin appear paler, as well as accentuate her lips and eyes. This is called shironuri style which tran

The Makeup of the Geisha (the materials, procedures)

In the past, there was no electricity in Japan, so artists entertained by dim candlelight. Eventually, they started painting the faces white to look more beautiful in such conditions. Geisha, kabuki actors, court ladies, dancers, etc. adapted the white makeup (oshiroi or shironuri in Japanese) as an

The Memoirs of Geisha and Mineko Iwasaki's Story

Geiko and maiko often get asked about the “Memoirs of a Geisha” movie and book. But this title is not well-known in Japan. Also in Japan the book which was tuerned into a movie is referred to “Sayuri” not memoirs of Geisha. The real geisha who know this movie admit that “it might

The Karyūkai (花柳界) meaning “The Flower and Willow World,” is the collective name for the areas in which geisha and the traditional establishments where they entertain are located. All hanamachi belong to the karyūkai. Its name comes from the oiran and the geisha who once worked side by s

How to Become a Geisha, Training of a Maiko

Most women enter the profession at the young age of 15 as compulsory education in Japan only goes up to middle school. Once they've made up their minds they can either be referred to the proprietress of an okiya by someone that they know, applying to the geisha union of a specific distric