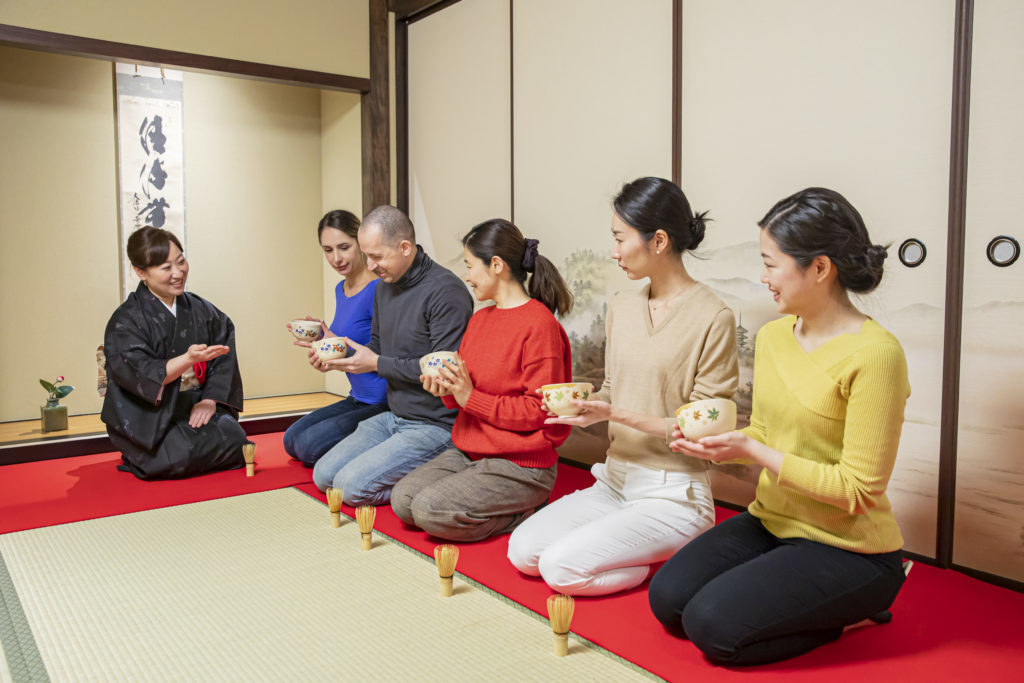 What is Japanese Tea Ceremony?

In Japan, tea ceremony is called sadou, chadou or chanoyu  (茶の湯) which roughly means the “way of tea.” The “way” stands for the right way or the perfect way that leads to awakening and peace of mind. According to Japanese beliefs, doing something that looks routine is the best path to enlightenment as long as the performer follows the perfect procedures and “forms.” One may have to spend years practicing these forms to finally reach the point where he/she can perform every single step with very little mental effort. This way of thinking applies to martial arts and other Japanese customs and traditions as well. 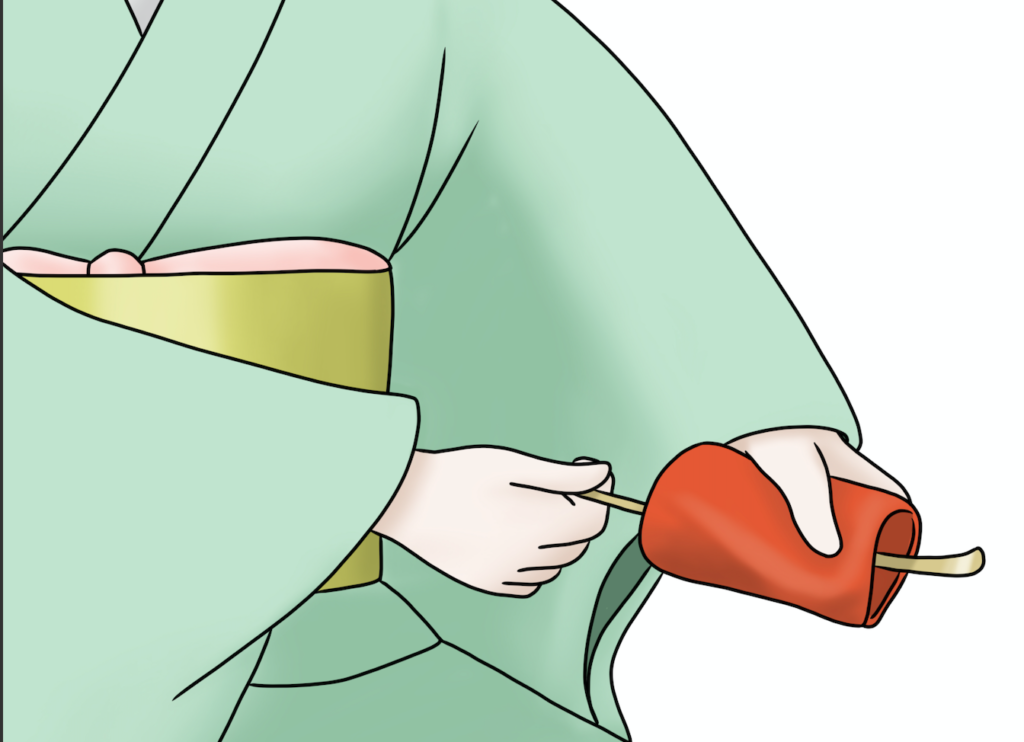 The tea ceremony process, the way of tea, can be broken down to these three simple steps:

Step 1: Beginning of the session and bringing utensils to the room

Step 3: Making and serving the perfect cup of tea

There are two types of tea ceremonies that are chakai (informal tea ceremony) and chaji (formal tea ceremony). A typical tea ceremony gathering, chakai, only lasts 45 minutes even though the training takes years. Chaji, on the other hand, involves participation of senior tea masters and the service of traditional kaiseki meal which can last up to 4 hours. Major Japanese tea ceremony schools such as the Urasenke School and Omotesenke School follow slightly different steps and procedures. 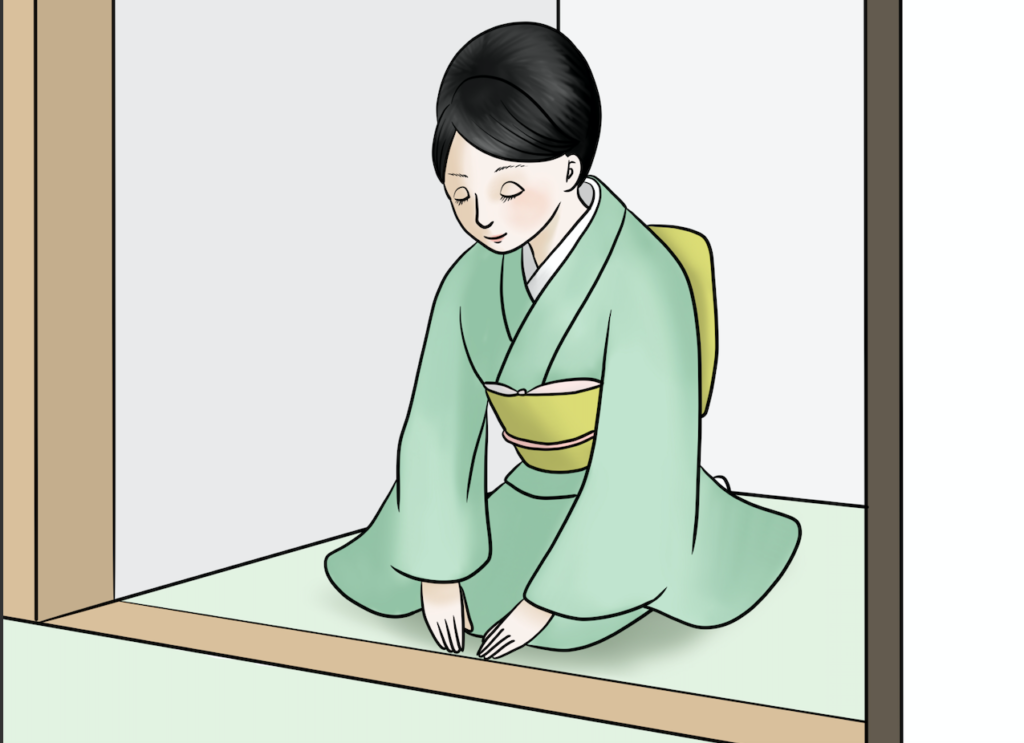 What is the Japanese tea ceremony etiquette?

Japanese tea ceremony etiquette is similar to showing basic social manners such as being on time, wearing a clean pair of socks and keeping quiet during the ceremony. Additionally, participants should not forget to take their shoes off when entering the building, put their cell phones on the manner mode, bow to the host and abstain from using heavy fragrances. It is expected that participants will wear a kimono or at least dress up conservatively. Hiding jewelry and watches would be ideal but not necessary. While everyone must be quiet when the host is purifying the tools, they are supposed to compliment the bowls and seasonal flowers at the end of the tea ceremony. When the host initiates the conversation, the topics should not be about personal matters but relate to tea ceremony and seasonal changes.

The etiquette and expected manners may also depend on whether the guest is a beginner or not. For instance, advanced practitioners must bring their paper fans and sit on their knees for the whole time but for first timers failing to do so would not be considered a social faux pas.  Additionally, most Japanese eat traditional sweets in three pieces and drink the tea in 3 sips but foreigners don’t have to consider these as strict rules. On the other hand, one simple rule most beginners ignore is making the “slurping sound” after finishing the tea which indicates the guest finished drinking and enjoyed all of it. 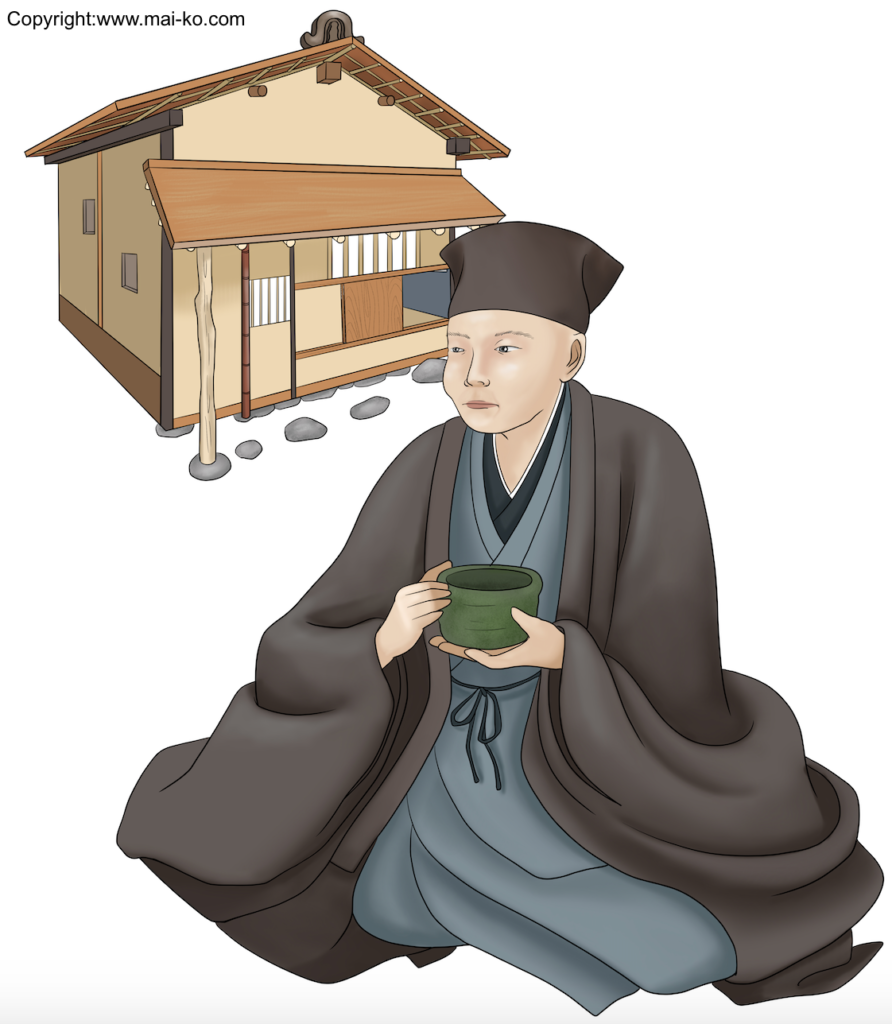 How did Japanese tea ceremony start? The history of Japanese tea ceremonies starts with the arrival of the first tea leaves during the Nara period when there was so much influence from China. In those times the tea was used mostly as a medicine and only available to the rulers and the noble families. Later Zen monks used tea leaves to stay awake during late-night prayers. Over the years Japanese turned a simple tea drinking activity into a ritual where bonding and gaining peace of mind became the main aspects. In the medieval times the samurai class used tea ceremony for forming political alliances. Nowadays, tea ceremony is practiced as a form of art and a unique cultural tradition. Read detailed history and timeline of tea ceremony here

Sen no Rikyu,  who lived in the late 1500’s and trained many warlords, has been considered as the founder of tea ceremony. He introduced the 4 main principles of tea ceremony: WA, KE, SEI and JAKU (harmony, respect, purity and tranquility). He also popularized the tea ceremony flowers and the WABI SABI style ceremony which roughly means “simple is the best.” The way of tea cannot be understood without reading the principles of Sen no Rikyu. Unfortunately, Sen no Rikyu was punished by execution ordered by the regent who was his student. The reason is still unknown today. 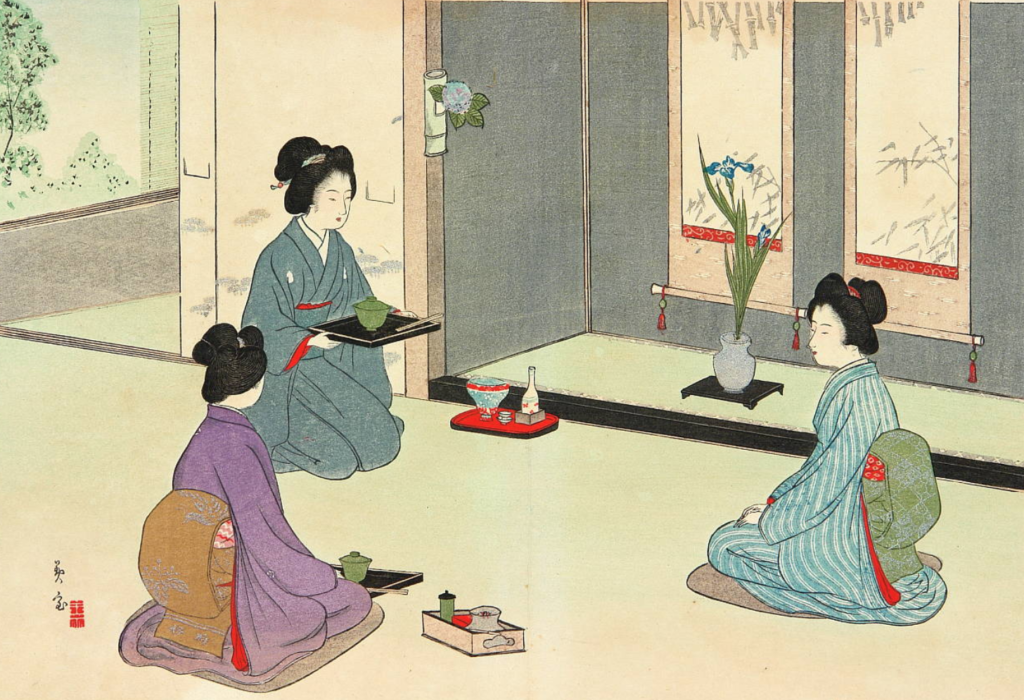 The founder of tea ceremony Sen no Rikyu stated that the meaning of tea ceremony is being present in the moment and realizing that every moment only occurs once. His philosophy is known as ichi go ichi e : one time – one meeting. This phrase roughly translates as “every moment occurs only once” or “cherish every moment” or “once in a lifetime chance.” Tea ceremony is not about the taste, it is all about enjoying the moment and remembering that this moment will never come back again. We have to forget about everything and just focus on drinking tea in harmony. Even if two people meet in the same room and drink from the same cup, it is not the same moment. The tea meeting, which may seem like a simple routine, should be deeply enjoyed as that tea moment would never come back. 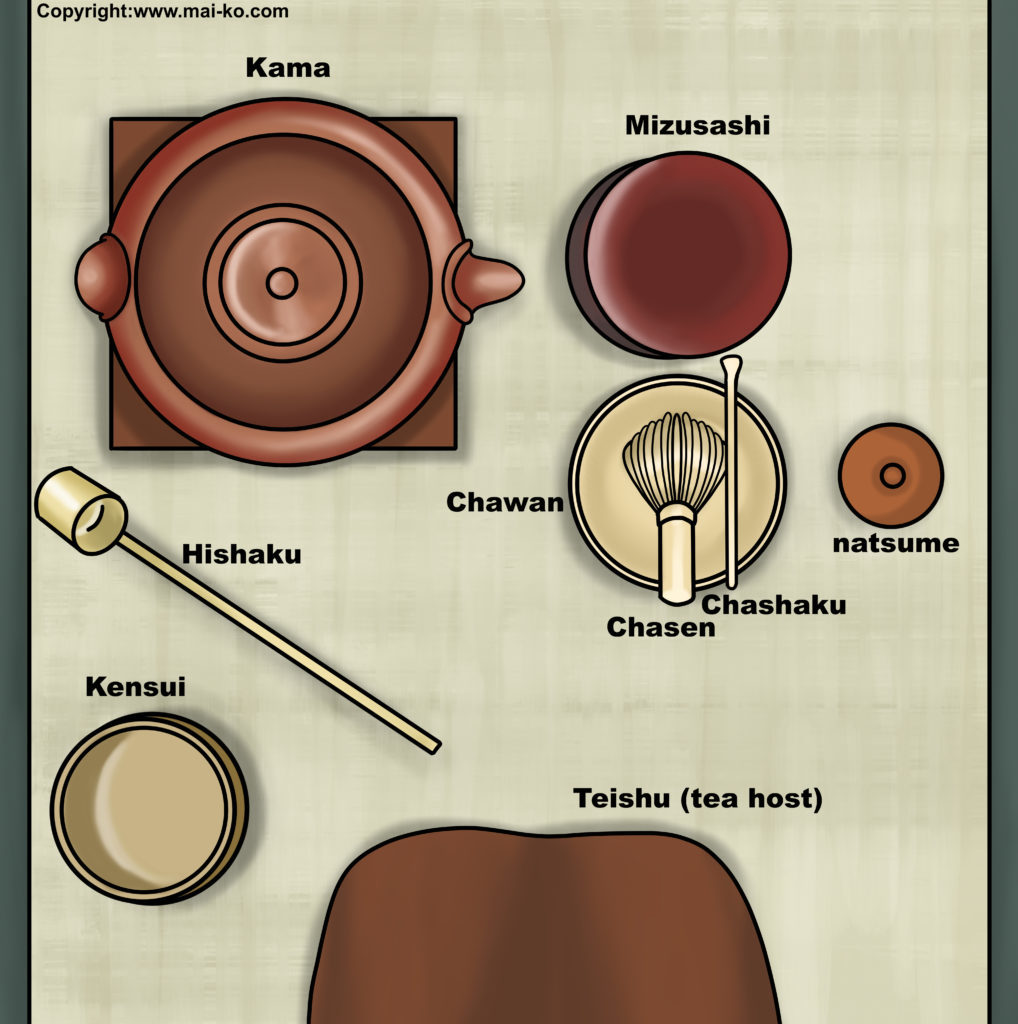 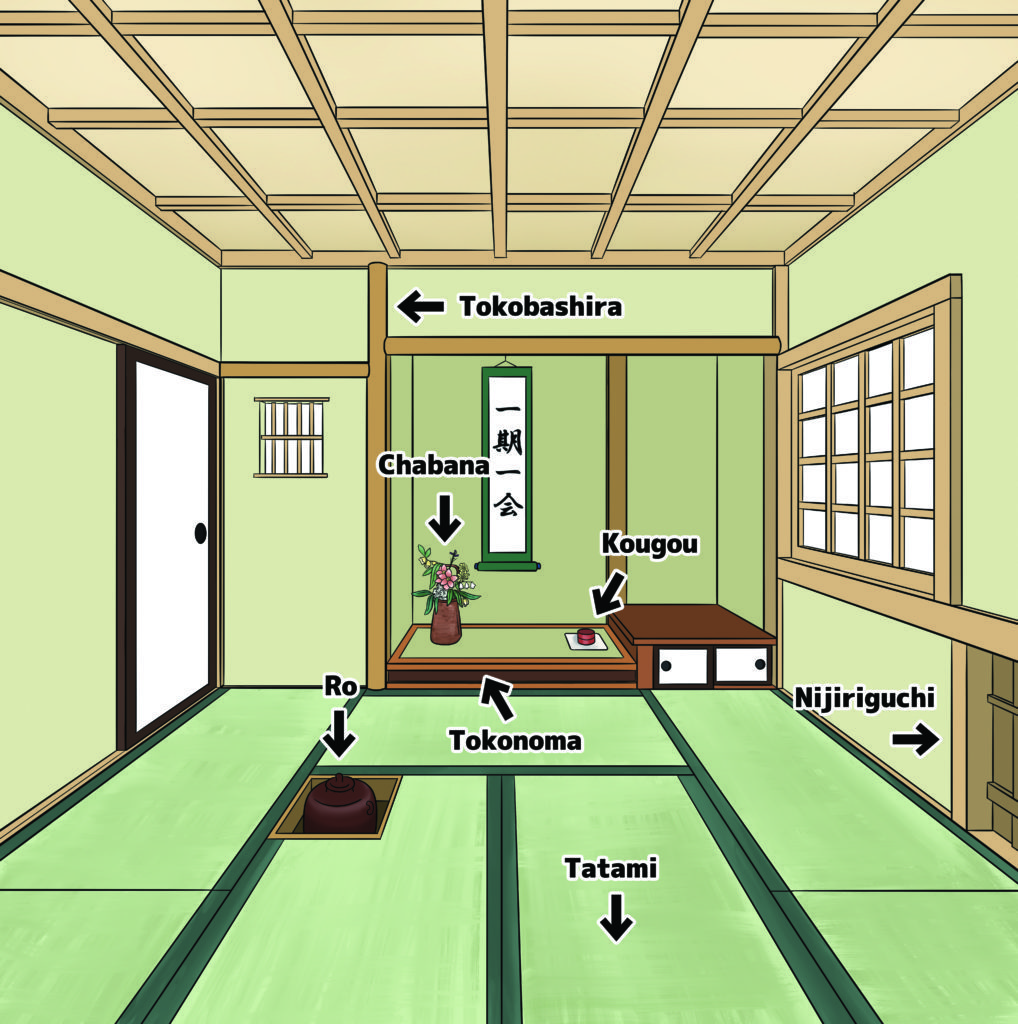 A typical tea ceremony room would have an alcove, a hand brushed scroll, seasonal flowers, incense container, folding screens, a square shaped hearth, half-door entrance for guests and the fusuma style separate entrance for the host. However there are clear rules on how these items are displayed in the tea room and what kind of sitting order the participants follow. For instance, flowers are displayed on the left side of the scroll and the incense container should be kept on the right side. The most senior person must sit closest to the alcove.

There are many interesting fun facts about Japanese tea ceremonies, the most interesting being the pure gold tea room built for the regent Toyotomi Hideyoshi in the 1500s. Readers usually get surprised to find out there are no chairs in tea ceremony rooms and women were not allowed to do tea ceremony until the 19th century. Did you know that tea ceremony huts have super tiny doors measuring shorter than 2 feet? You can find many other intriguing tea ceremony facts here. 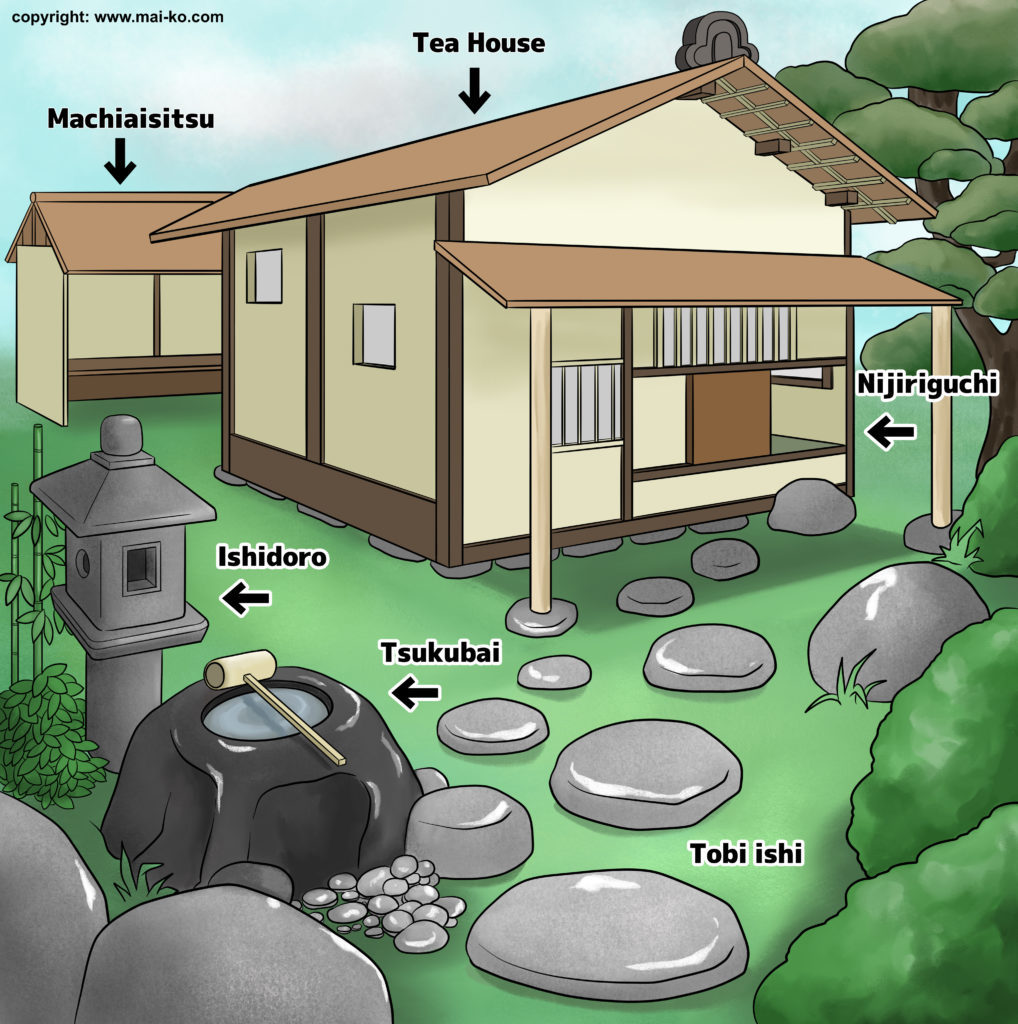 The most famous teahouse in Japan is Kimono Tea Ceremony Maikoya Kyoto which has branches in Kyoto, Osaka and Tokyo. In this teahouse visitors can join introductory tea ceremony sessions held in English or Japanese everyday from 9 AM to 7 PM. Some other famous teahouses are Tai An (the oldest remaining tea house built by Sen no Rikyu), Ichiriki Chaya (teahouse that was used by samurais to topple the shogunate) and Shokin Tei Tea house. Readers should note that tea ceremony usually requires an invitation from the host. Tea shops such as Ippodo and tea cafes such as Hamarikyu Gardens that offer tea tasting are not traditional teahouses. Read more about historic tea houses in Tokyo and tea gardens in Tokyo.

When is Japanese tea ceremony held?

What kind of tea is used in tea ceremony?

In the tea ceremony, ground green tea leaves also known as matcha are used. The color is green because the tea leaves are not roasted or fermented. There are stone grinders that turn the fresh matcha tea leaves into powdered tea. The most famous tea is grown in Uji, the southern part of Kyoto. During the Edo period 30 armed horsemen used to escort the first batch of seasonal tea leaves sent to the Shogun in Tokyo from Kyoto. The growth of matcha leaves usually slows down in April and the leaves are hand picked in the month of May. Then they are steamed, dried and stone-ground. The type of green tea used at Maikoya is the above average grade green tea grown in Kyoto. The difference between low grade and high grade is difficult to notice when drinking thin tea (usucha). Read more about ceremonial tea 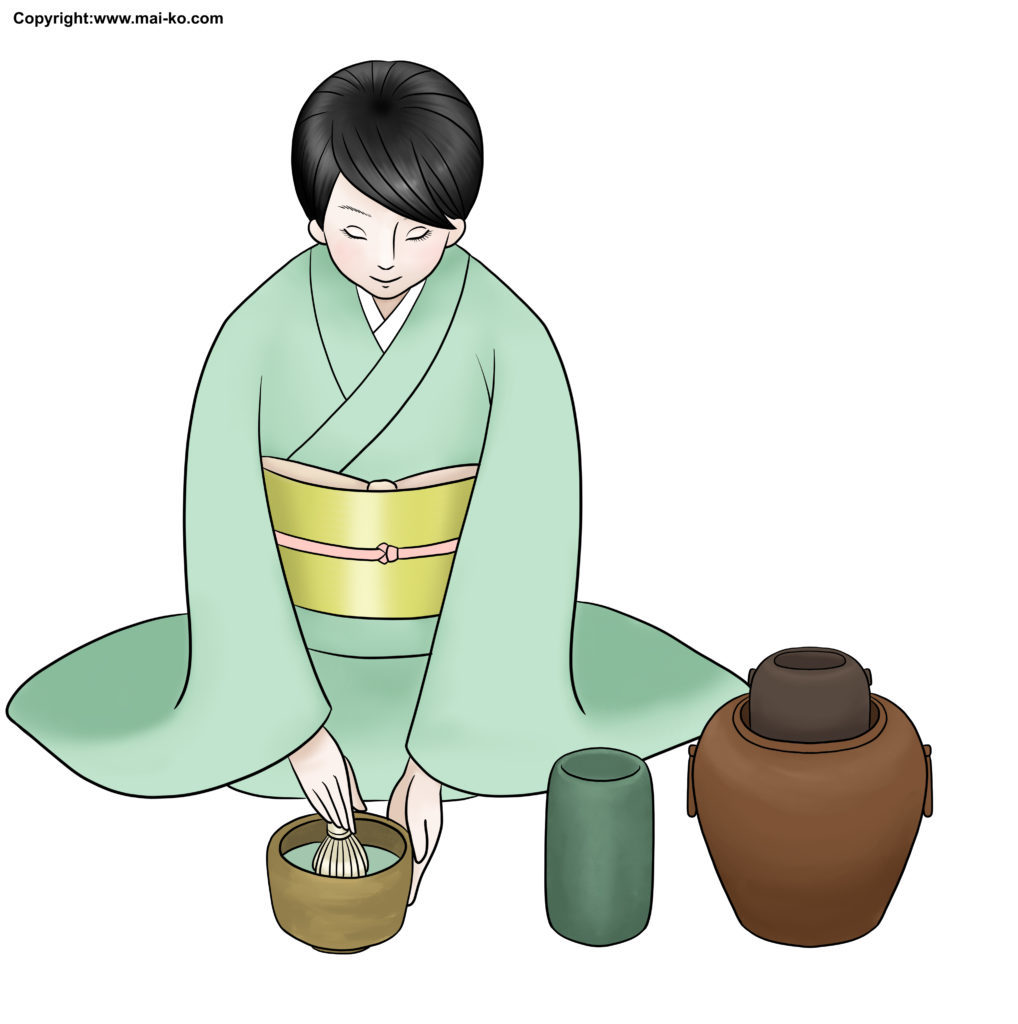 What is the Connection between Tea Ceremony and Meditation?

Tea ceremony is mostly about bonding between the host and the guest but it is for sure a meditational activity as the great founder Sen no Rikyu called “jaku” (tranquility) one of the main elements of tea ceremony. Then one may ask why it is different from any other tea drinking activity and why it may lead to mindfulness and the ultimate peace of mind. At MAIKOYA we tell our guests that the answers lay in the basic elements of zen philosophy which is also deeply embedded in the culture of Japan. These are: Transience, Presence, Selflessness, Accepting life as it is.

Zen is difficult to define but it refers to mindfulness and the idea that simple actions may lead to the awakening of our spirits. There are a lot of similarities between the main principles of tea ceremony (harmony, respect, tranquility)  and the philosophy of zen (mindfulness, nothingness, transience).Tea ceremony involves following dozens of prescribed steps so that one does not have to think about the next step and gain inner peace while performing this ritualistic activity. That is why tea ceremony cannot be considered separately from Zen. We should also remember that matcha tea was introduced to Japan by the Zen Monk Eisai who built the first Zen temple in Japan. Read more about tea ceremony and meditation

Tea ceremony bowls tend to be the most precious utensils among all the tools. There are many rules on how to hold the tea ceremony bowl and how to place it on the floor. Winter bowls (tsutsu chawan) tend to be deep to keep the tea warm and the summer bowls are shallow to match the season. Cherry blossoms and fall leaves are often reflected on tea bowl decorations. Interestingly, Japanese broken tea bowls are usually not thrown away; they are fixed by using urushi and the cracks are covered by gold powder. This process symbolizes the importance of accepting our scars and celebrating them.

The most famous Japanese tea bowl is the “raku chawan” made by the Raku family for the past 400 years. What makes Raku chawan unique is that the kiln is prepared and put to rest for 70 years to be used by the future generations from the same family. It is hand made without using molds so each raku chawan is unique and very precious. An average black raku chawan costs more than $1000 and there is usually a couple of years waiting time. 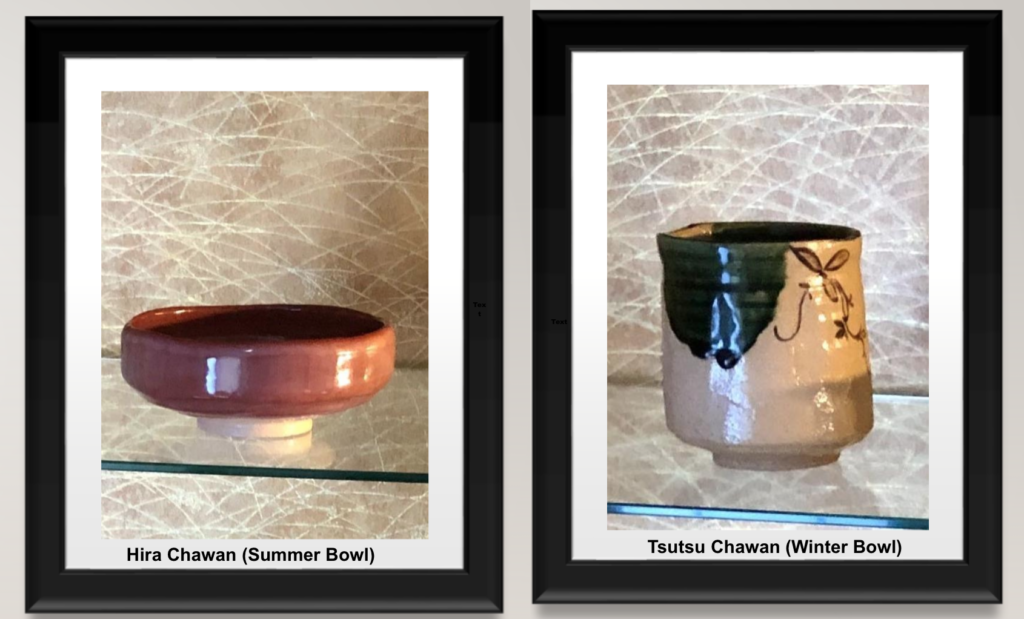 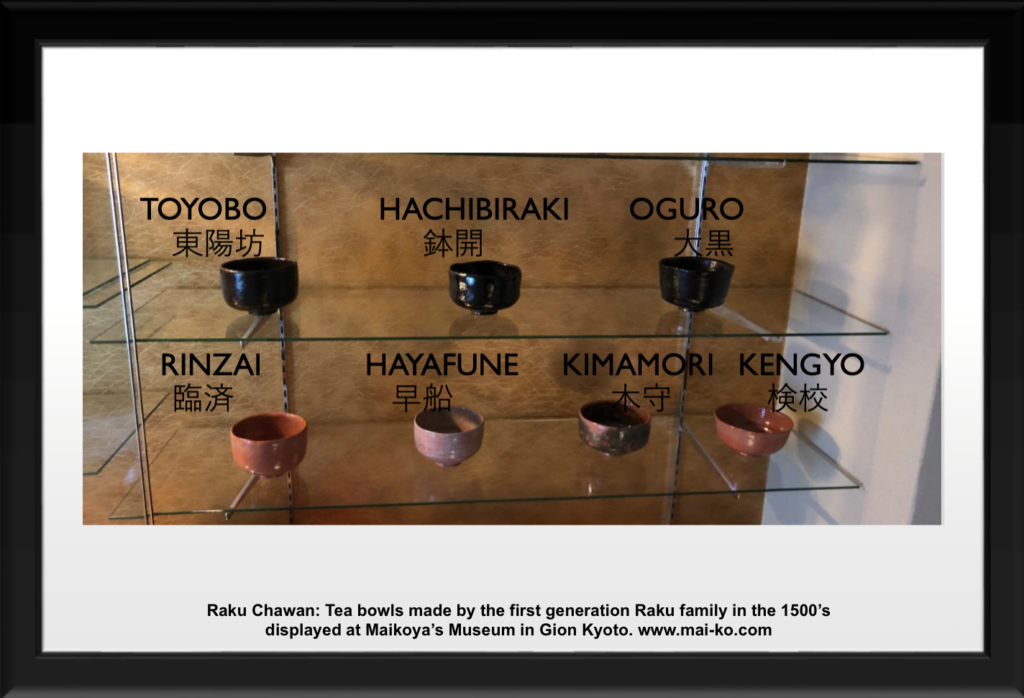 Tea Ceremony Near Me