Said to be one of the three best scenic sites of Japan, Miyajima Island has long been thought of as the divine island. Itsukushima Shrine, which looks as if it is floating on the sea, is beautiful (currently under restoration and covered), but looking down the view of the Seto Inland Sea from the top of Mt. Misen is worth taking the time to climb up. It is populated with tourists during the day, but quiet in the evening. A great place to stay a night to have a romantic evening or to wake up early and hike on the mountain pass.

From Hiroshima: take JR train to Miyajima-guchi. Takes 30 minutes and ¥420. Then walk about 5 minutes to Ferry Terminal and take a ferry (There are two companies and run every 15 minutes or so. ¥180 each way.) and 10 minutes ferry ride takes you to Miyajima Island Ferry Port.

From Peace Park: some streetcars can take you to Miyajima-guchi, but it will take more than one hour. There is Sekai-Isan Koro (World Heritage Line) from the pier by Motoyasu Bridge on the eastern side of the Park. This boat will take you to Miyajima Island in about 45min. Cost ¥2,200 one way and ¥4,000 return. Probably the nicest way to get to Miyajima, but they do not run when the water level is low. You can book your seats on their website until one day before your departure date.

The shrine on Miyajima Island was originally established in the late 6th century, but it is Taira no Kiyomori, the first, foremost samurai warrior of Japan who made Itsukushima Shrine in its present form in the 12th century.

*There are about 500 wild deer on the island, but unlike deer in Nara, they are slim and slender. People on the island believe they should live wild in the mountain, so you are advised not to feed them.


The statue of Kiyomori Taira 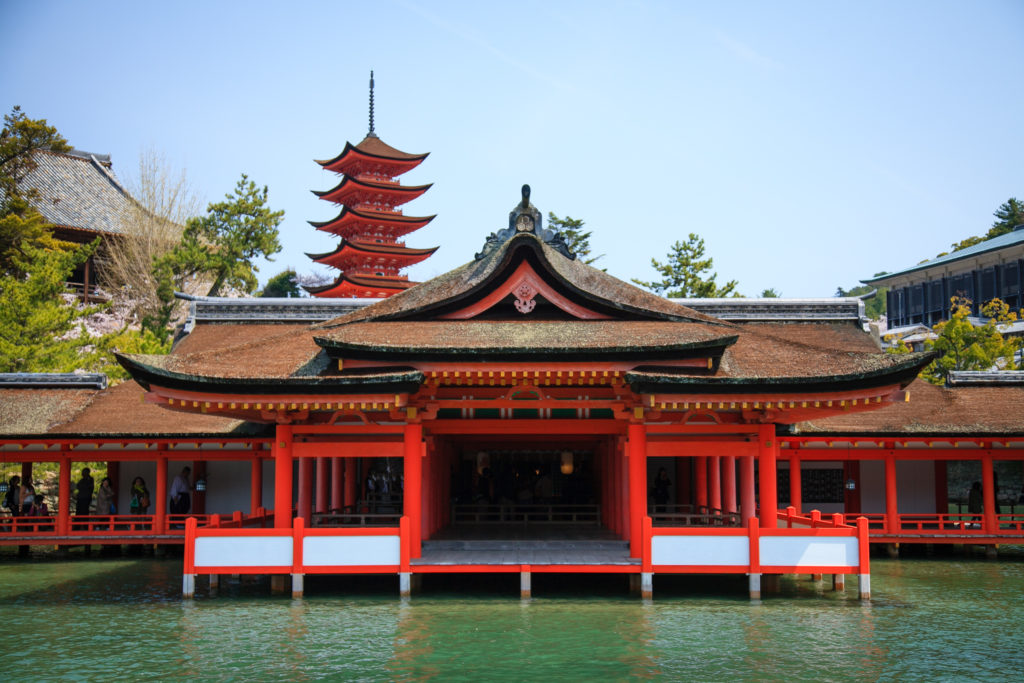 People thought the whole of Miyajima Island is sacred, so decided to build the shrine on the sea to pay respect to the deities. The architecture is built in the Shinden style, an aristocrat style of the Heian Period (8th-12th century). There are five male deities and three female deities enshrined here. On high tide, the water comes in, and it looks as if the whole shrine is floating on the sea. 300 yen to enter.

*In between wooden floorboards, there are some spaces, so sea waters can come through when the water level goes up.

*Normally, you are advised not to take photos of the main halls where deities are believed to be residing, as well as men and women who work in religious institutions to pay respect for them.

*Please be careful not to touch anything as everything on-premise is a national treasure and a part of a World Heritage Site. 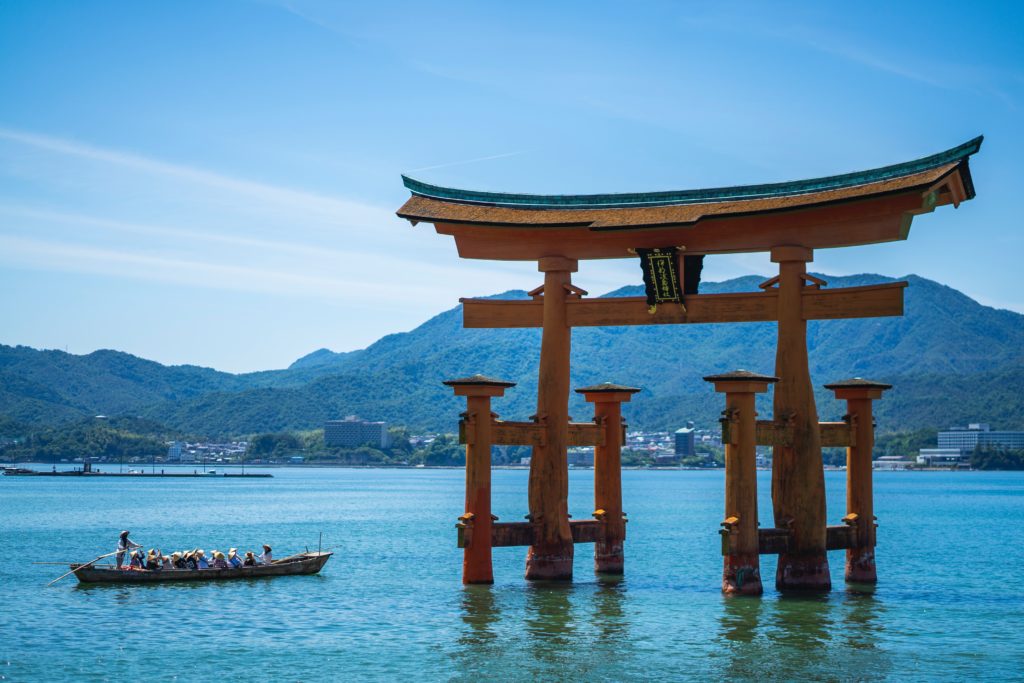 You may think this Torii Gate is floating on the sea but in fact, it is standing on the sea ground with its weights of 66 tons. The current gate is the 8th generation built in 1875. It is 16m high and made of the camphor tree. At low tide, the base of the gate will appear, and you can walk to it. Usually, high tide and low tide come and go every 6 hours or so, so you can see both on the sea ground and water if you stay there half a day.

*You can check the time of high tide and low tide on the day on www.miyajima.or.jp

*The Torii Gate is going through a major restoration now, and it is totally covered. They do not know when it is going to finish.

*You can see a huge building on the hill of the mainland on the other side of Torii Gate. It is the main building of one of the newly established religious institutions. 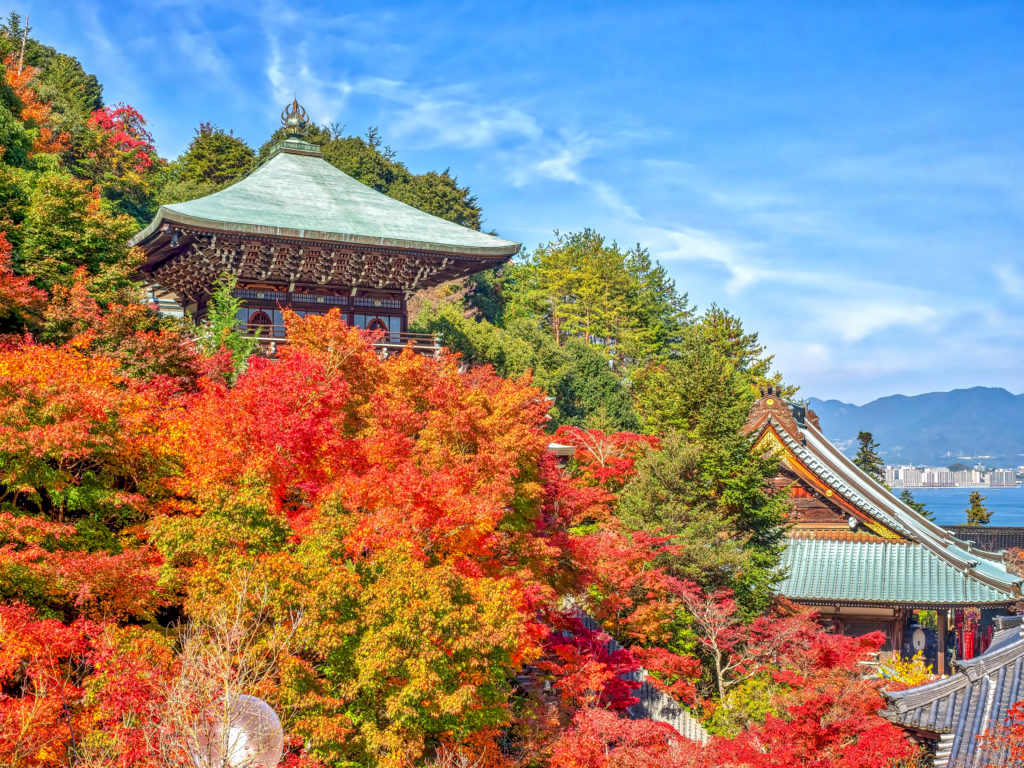 10 minutes’ walk from the exit of Itsukushima Shrine, there is this Buddhist Temple which offers many interesting images. Founded by a Japanese Buddhist monk Kukai in the early 9th century, there are prayer wheels, 500 statues of disciples of Buddha, and the cave containing 88 images of Shikoku Pilgrimage. It is free to enter.

On the way to Ropeway Station, there is this park famed for its autumn leaves. Momiji means a Japanese maple tree, which will turn into scarlet in the fall. You will encounter many deer here, too.

This two-stage ropeway takes you close to the top of Mt. Misen. It is ¥1,010 one way and ¥1,840 round trips. And then you walk about 30 minutes to Mt. Misen Observatory, and the beautiful view of small islands of Seto Inland Sea is waiting for you. There is a free shuttle bus from a stop near Iwaso Ryokan〔7〕 every 20 minutes, even though it is a short distance walk on the uphill slope. Please remember to check the time of the last ropeway going down (it is usually between 4:30 pm and 5 pm) unless you want to walk down the mountain in the dark.

If you would like to have time to contemplate at Peace Park and then come to Miyajima, why don’t you think about spending a relaxing night on Miyajima Island? After all, you spent a lot of time and time to get to Hiroshima, so it is a pity if you have to rush back to Kyoto without experiencing what Miyajima has to offer. There are many Japanese-style Inn on the Island. One place to recommend staying is Iwaso Ryokan. Founded in 1854 during the Edo Period, you can have a truly Japanese experience from a full-course meal to Japanese hot spring bathing.

It is conveniently located close to the Ropeway Station. Or you may wake up early and trek up to the mountain. (I stayed at another ryokan once on the island but forgot the name. This is the one Chikage used to work for and supposed to be good.) There are three trekking routes to the top of Mt. Misen. The Momijidani Trail is currently closed, so please check on the website for the latest information.

There are many shops and restaurants on this street between Itsukushima Shrine to the Ferry Port. It is usually busy with people, but you can find all sorts of souvenirs, including local wooden crafts with the biggest rice scoop in the world.

Things to eat in Miyajima

Three things to eat while on Miyajima Island are oysters, anago, and Momiji manju.

Oysters: Hiroshima has the biggest share of oysters in Japan. You can eat them raw, but the most popular way to eat on the island is to be grilled on charcoal. There are many vendors on the street. One of the popular places is Yakigaki-no-Hayashi.

Anago is conger, similar to Eel, but the taste is not as fat as the eel. They usually grill it with special sauce and serve it over boiled rice. This is one of my favorite Japanese dishes, and I urge you to try if you are adventurous enough!

They are popular sweets in Hiroshima and the perfect dessert for you to munch on your way back to the ferry port. They are maple leaf-shaped buns with different fillings from sweet bean paste to chocolate.

There is also a Starbucks and if you missed a chance to eat okonomiyaki in Hiroshima, there are several restaurants you can eat here. However, many restaurants are usually crowded, and you probably end up going into the one which is not busy. If you come to Hiroshima and Miyajima on a day trip from Kyoto or Osaka, it takes 4 hours to return on Shinkansen and another hour to move between Hiroshima and Miyajima. So, it will be a long, exhausting day, and you will not have enough time either in Peace Park or on Miyajima Island.

So, it is recommended if you could spend one night on Miyajima especially in autumn.