Ginkakuji, also known as Silver Pavilion, was established by Ashikaga Yoshimasa, the eighth Muromachi shogun in the late 15th century at the foot of the Eastern Mountains in Kyoto. Yoshimasa was a grandson of Yoshimitsu, who built the Golden Pavilion. 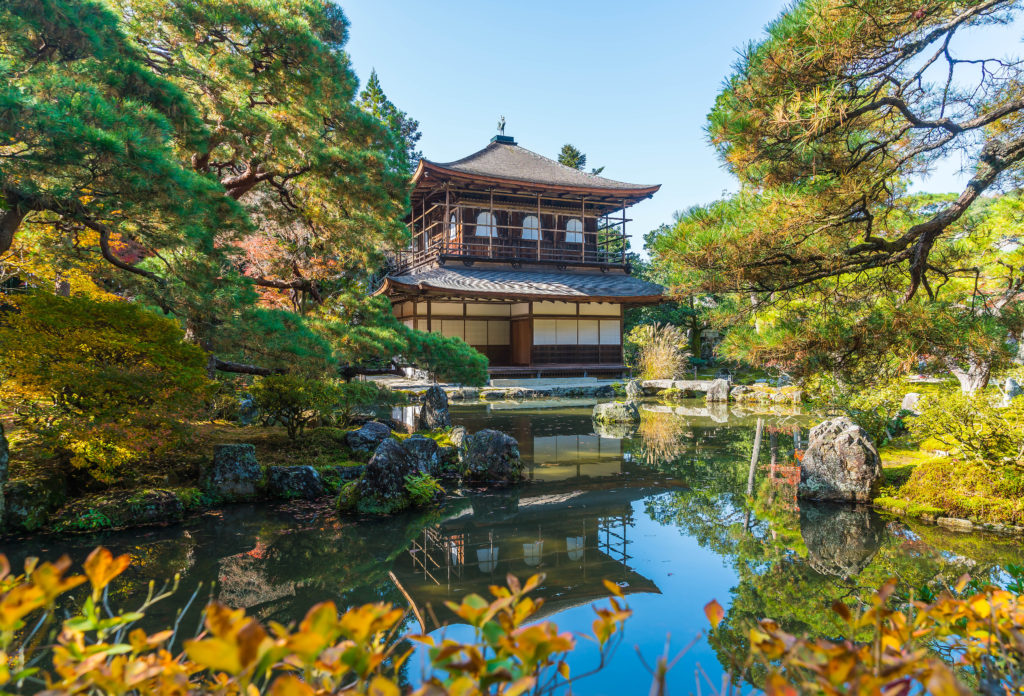 He is usually known as an incompetent leader who brought the turmoil of civil war, but his love for arts made the basis for today’s Japanese culture. Ginkakuji is the realization of his aesthetic world. Standing here, we can reflect upon his life 500 years ago.

No train stations nearby, but there are many buses running from Kyoto Station or the center of the town.

After going through the smooth slope up with many shops and restaurants for about 5 minutes, you will be met by the long thick approach lined with a bamboo fence on both sides with high hedges on top. Yoshimasa wanted Ginkakuji to be as far away from the hustle and bustle of the political stage even though the physical distance was not that far away from central Kyoto.

It is as if he wanted to create his ideal world of beautiful arts and religion here and immerse himself in it, and this long approach carefully cuts off the outside world leading to Yoshimasa’s world of Ginkakuji.

When I first visited Ginkakuji as a teenager, I felt as if I was betrayed by it as Ginkaku was not silver. To my eyes, it looked like a small, old wooden house. I then thought they did not have enough money to put silver left on it.  However, there was no trace or record that the hall was ever intended to be covered by silver, but people called the place Ginkaku in comparison to Kinkaku later.

Now I must confess I prefer Ginkaku over glittering Kinkaku for its sedated, quiet beauty.  The first floor was to be Yoshimasa’s meditation room even though he died before its completion. On the second floor, the guilty image of Kannon Bodhisattva was looking down the garden, facing backward to the center of Kyoto.

Kogetsudai is the mound of white sand that looks like Mount Fuji. It did not exist at the time of Yoshimasa, and it is not exactly known when and who made Kogetsudai. It is speculated that this mount was created during the Edo period to enjoy the reflection of the moonlight over it, but some say it is the mount to climb up and sit down to enjoy the moon.

Along with Kogetsudai above, no one has an answer to why Ginshadan was made. Kogetsudai and Ginshadan together look like a piece of modern art in this old Zen Buddhist Temple. Some say Ginshadan is representing the beautiful West Lake in China. It must be beautiful to see the moonlight reflecting upon white sand.  It will shine like the wave of water or snow even though we can only imagine it as Ginkakuji closes at 5 pm.

Along with Ginkaku, Togudoh is another original building from 500 years ago. This building has a thatched roof with cypress bark with eaves under gables. Even though the inside is open for the public only at Seasonal special viewing, Yoshimasa’s four and a half tatami mattress room Dojinsai is said to have become the template rooms for Japanese houses.

Yoshimasa, who was a big fan and practitioner of Tea ceremony, and this is why a four and a half tatami mattress room is seen as the ideal size for conducting Tea ceremony today. Originally it housed the Amida Buddha inside, it symbolizes Yoshimasa’s belief in the Pure Buddhist Land. 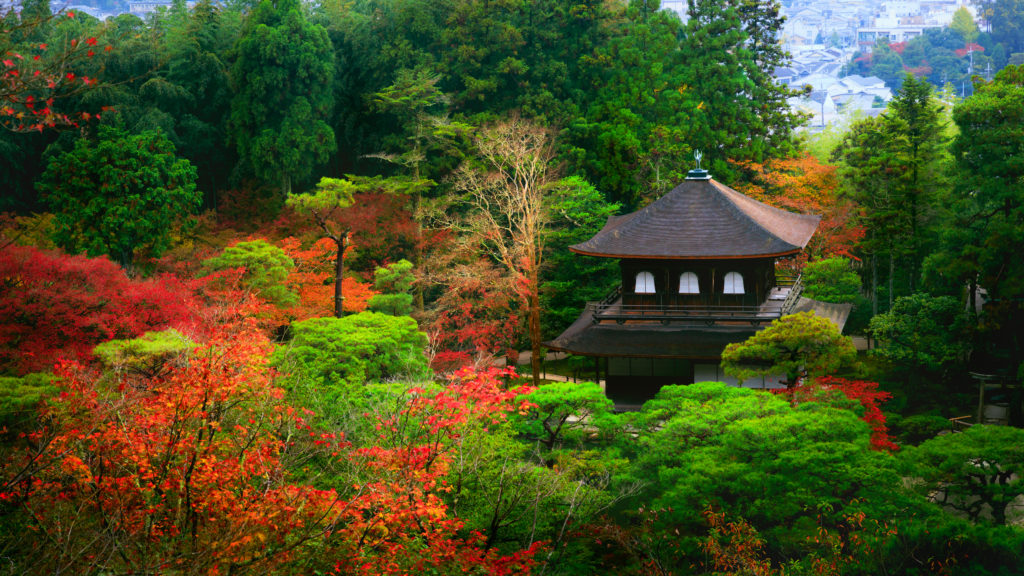 Yoshimasa visited Saihoji Temple (more commonly known as Moss Temple) many times to study the garden by a renowned Zen Buddhist priest Musoh Soseki, who also designed Tenryuji Temple Garden. The Ginkakuji garden was designed to stroll around the pond (Kinkyochi), which had such sights as 3 stones representing Buddha and his two disciples, seven stone bridges, and four floating stones.

All the stones came from all over the country. Tsukimachiyama (Mountain awaiting the Moon) in the background is a perfect borrowed landscape.

At the end of the Lower Garden, there is a pretty view of a small fall and a spring called Sengetsu-sen (Moon-washing Spring). From here, you can either go up the steep stairs or make a right turn toward the exit if you are tired. There is a small well, which Yoshimasa is said to have scooped waters for his Tea ceremony.

Also, there is a trace of one of the oldest Zen Buddhist stone gardens on the right-hand sidehill.  When you walk up to the top, the beautiful scenery of Ginkaku and northern Kyoto is waiting for you.

The life of Yoshimasa was rather peculiar and sad. He became a successor of Ashikaga Dynasty at the young age of 8 but decided to give his position away to his brother 20 years later to lead a quiet life at Ginkaku dedicating his life to the arts he loved. But then, his fearful wife became pregnant and gave birth to a son, which triggered the Onin War.

From the top of the Upper Garden, you can see the large hill at the back of Ginkaku, blocking the view of central Kyoto. Yoshimasa probably didn’t want to see what is happening in the real world, leaving politics and his family behind. However, his contribution to traditional Japanese arts has been enormous.

It is here at Ginkaku, the ways of tea, flower arrangement, incense are all practiced and flourished, and without his dedication, Japan probably did not turn into such a culturally distinct country today. From the top of the hill, you might also be able to spot an aogiri (Chinese parasol-tree) on the other side of the hill. This tree survived the Atomic Bomb in Hiroshima.

This is the biggest one out of the 5 mountains in Kyoto lit up by fire every August 16th.  Japanese believe the spirits of our ancestors come home on the 13th of August, and we send their spirits back with this fire on the 16th. It is only 466 meters high and an hour trekking route from the back of Ginkakuji.

From the top, you can see a beautiful view of Kyoto as well as the lines of grates in the shape of the Chinese character ‘Big,’ which will be lit up on August 15th.  If you are not in high heels, a highly recommended walk to do.

This little pass along the brook running from Ginkakuji-michi to all the way to Nanzenji Temple is about 2 km walk.  Its name comes from the fact that a famous philosopher used to walk along this pass on his way to Kyoto University where he taught. It is popular during the cherry blossom season, but otherwise, is a quiet path.

For some of you, it may look like the back streets of your yards, but there are some small, quiet gems of temples along the way.  My favorite is Honen In. Jun’ichiro Tanizaki, who wrote “Makioka Sisters” is buried here.

Onigiri, a Japanese rice ball is served here. Each onigiri is ordered individually or you can order a set meal that comes with a soup and pickles. Conveniently located on the main road leading up to Ginkakuji.

This is a little ramen noodle place with counter seating. 10 minutes’ walk from Ginkakuji.

Kinkakui also known as Golden Pavilion, is another most popular tourist destination in Kyoto. Founded by Yoshimitsu, the third shogun of the Ashikaga Shogunate Dynasty in the late 14th century, it is now an untypical Zen Buddhist Temple.  It was burnt down by a training monk in 1950, which became a

Located on the Hill of Eastern Kyoto, Kiyomizu-dera Temple is one of the most popular landmarks to visit in Kyoto for a long time both among Japanese and overseas visitors.  I