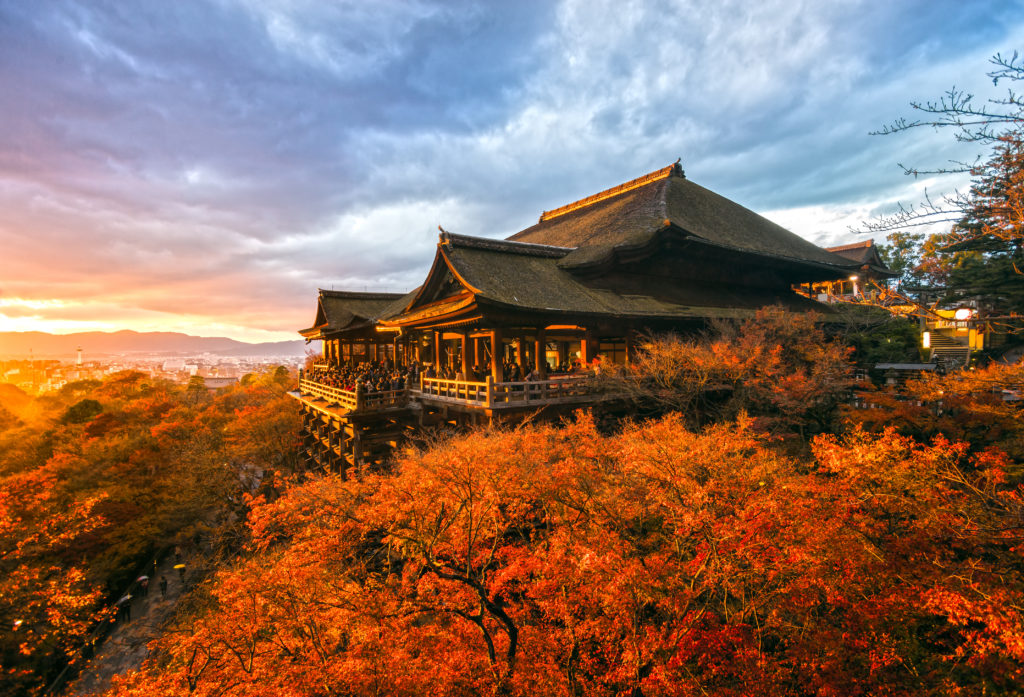 Located on the Hill of Eastern Kyoto, Kiyomizu-dera Temple is one of the most popular landmarks to visit in Kyoto for a long time both among Japanese and overseas visitors.  It was originally built in the early 8th century before Kyoto became the capital of Japan.

The present buildings were reconstructed in the 17th century. One high-rank samurai warrior (Sakanoue no Tamuramaro) came here to hunt for deer in order for his wife to deliver a baby safely. But he met a meditating monk in the forest and was told that it was a wrong deed to take animals’ life. Realizing his action was wrong, the soldier became a devout believer of Buddhism and established Kiyomizu-dera Temple here.

Always crowded throughout the day, so go early as it opens at 6 am. Also, the temple is famous for cherry blossoms and autumn leaves. Please check for its nighttime illumination viewings in spring and autumn.

25 minutes’ walk from Gojo Station on Keihan Line. 15 minutes’ walk to Kiyomizu-michi and Gojo-zaka Bus Stop.  It is an uphill walk, but there are many shops to look around on the way to the Temple. If you want to minimize your walk, you can take a taxi half the way, but still, have to walk uphill for another 5 minutes. Or, some drivers will take you on Chawanzaka backstreet.  For wheelchair access, you can call the Temple in advance.

10 things to see at Kiyomizudera 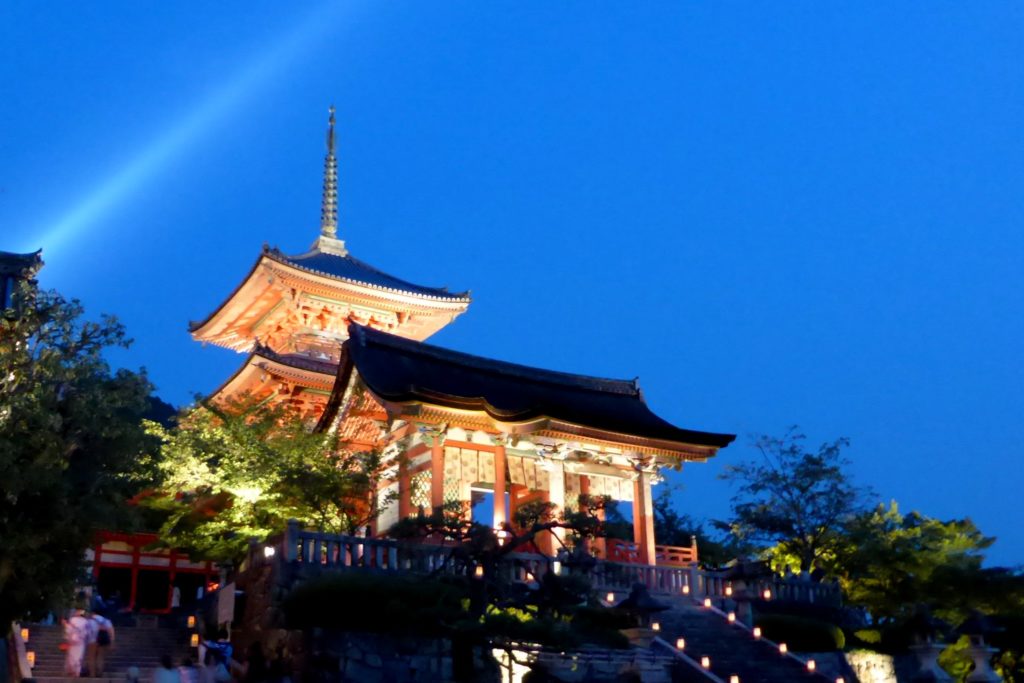 You will be welcomed by the vermillion colored main entrance gate of Kiyomizu-dera which is protected by two statues of guardian kings on both sides. Next to it, there is a newly built statue of a dragon. You can also see one of the tallest three-storied pagodas in Japan. Do not miss the view of Kyoto from the side of the pagoda.

Next to the Pagoda, there is one of the sub-temples of Kiyomizu-dera which is famous for Tainai Meguri, walking around inside the womb of a female bodhisattva. Going down the stairs in total darkness, you can walk through while wishing for your dreams to come true. Particularly known to be good for safe delivery of a baby, but not recommended for a pregnant woman! A peculiar experience.

After you go into the temple, you see large iron sticks and a pair of iron clogs.  They are said to be used by a strong samurai warrior to train himself.  I have seen one person lift up the bigger iron stick weighing 90kg (200 pounds), so you can try it yourself.

This unique architectural style is what Kiyomizu-dera is known for. The large wooden main hall stands off a cliff overlooking the city of Kyoto.  It is 12m high, and 139 zelkova tree pillars are holding this stage. There is a saying in Japanese, ‘Jumping off from Kiyomizu Stage,’ which means making a big decision to do something splendid. Indeed, 234 people tried to jump off here, and there was a surprising 85% survival rate. The best view of this gigantic stage is seen from Okuno-in (Inner Temple) and Koyasu-no-Toh, another three-storied pagoda up the hill.

This is the shrine within Kiyomizudera Temple precincts dedicated to the success of your love. There is a pair of two stones which are 18 meters apart. If you could reach from one stone to another closing your eyes, your love would come true. However, this shrine became rather colorful and bizarre in recent years, and it has many different deities to make all sorts of your wishes come true. There is even one tree to wish for killing the man who betrayed you.

Just off the regular route to the direction to the Exit, if you slightly make left up the hill, you can see another three-storied pagoda. This one is particularly designed for the safe delivery of babies. This side trip is recommended as you can see the most stunning view of the Kiyomizu Stage from the other side.

Kiyomizudera literally means ‘clear water temple.’  This is because of the pure, sacred water flowing from the mountain which is believed to be blessed by the Kannon Bodhisattva. At Otowa no taki, you can drink these waters.  There are three different streams of small falls; one is for longevity, one is for love, and the third one for academic achievements.

8. Aterui More – the Memorial stone of the Ainu hero

Japan has indigenous people called Ainu, who live in the northern part of Japan. Atrui was the head of Airu people who bravely fought against Sakanoue no Tamuramaro, who later established Kiyomizudera. In 1994, this memorial stone of the Ainu hero and his mother was found here. Not many people notice it, but I hope you do.

9. Statue of Dainichi Nyorai on Kiyomizu-michi – made of fallen trees during the Great Earthquake in East Japan in 2011

This is another thing people do not notice.  On March 11th, 2011, northern Japan experienced a big earthquake followed by tsunami tidal waves and the Fukushima Nuclear Power Plants Accident.  Over 22,000 people died and some of the areas are still closed because of high radiation levels.  Only one pine tree out of 70,000 pine trees survived at heavily damaged Kesen’numa City and became a symbol of Hope.  This wooden statue was made of those fallen trees engraved by over 11,000 participants.

There are many souvenir shops and stalls where you can munch things on the way to Kiyomizudera and on the way back all the way to Yasaka Shrine in Gion. It is just fun to walk around and there are many scenic locations to take photos, most famously by Yasaka no toh, 5 storied pagodas in the area.  The area is also known for Kiyomizu-style ceramics.  There are many Kiyomizu ware shops especially on more quiet Chawanzaka (One street behind Kiyomizu-michi), where there used to be many kilns.  If you become tired, you can have a coffee sitting on a tatami mattress (Yes, you have to take off your shoes!) at Starbucks in Ninenzaka. 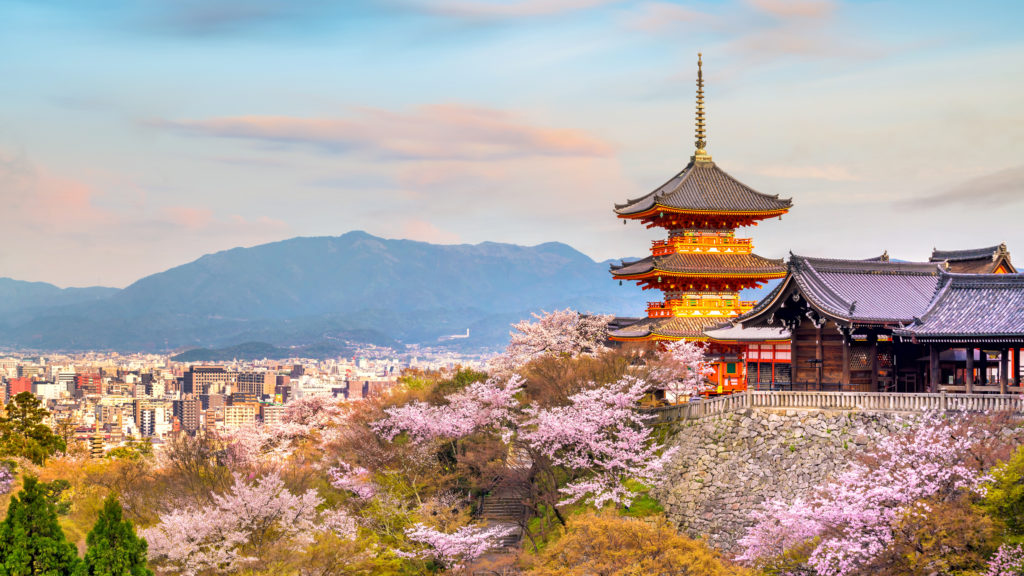 There are many places to eat, but here are some of my recommendations.

It is operated by Asashi-do, one of the biggest Kiyomizu ware shops.  They offer different meals from a bowl of noodles, sukiyaki, tempura to a bento box. The restaurant also has some tables overlooking Kyoto. This restaurant is usually crowded, but they have a nice waiting space to sit down and relax, or you can wait, looking around ceramic shops next door.

The oldest tofu restaurant in Kyoto.  A set meal cost ¥3,000 to ¥4,000.  If you are a vegetarian, this is a place to go.  You must take off your shoes and eat on a tatami mattress.  They also have a nice garden.

This Kodaiji branch of Kyoto-style udon noodle shops is popular. Their homemade thick white flour noodles are served in soup, but their signature style is noodles eaten in the dipping sauce.  This branch also serves many different Japanese sake and dishes to go with.

Kinkakui also known as Golden Pavilion, is another most popular tourist destination in Kyoto. Founded by Yoshimitsu, the third shogun of the Ashikaga Shogunate Dynasty in the late 14th century, it is now an untypical Zen Buddhist Temple.  It was burnt down by a training monk in 1950, which became a