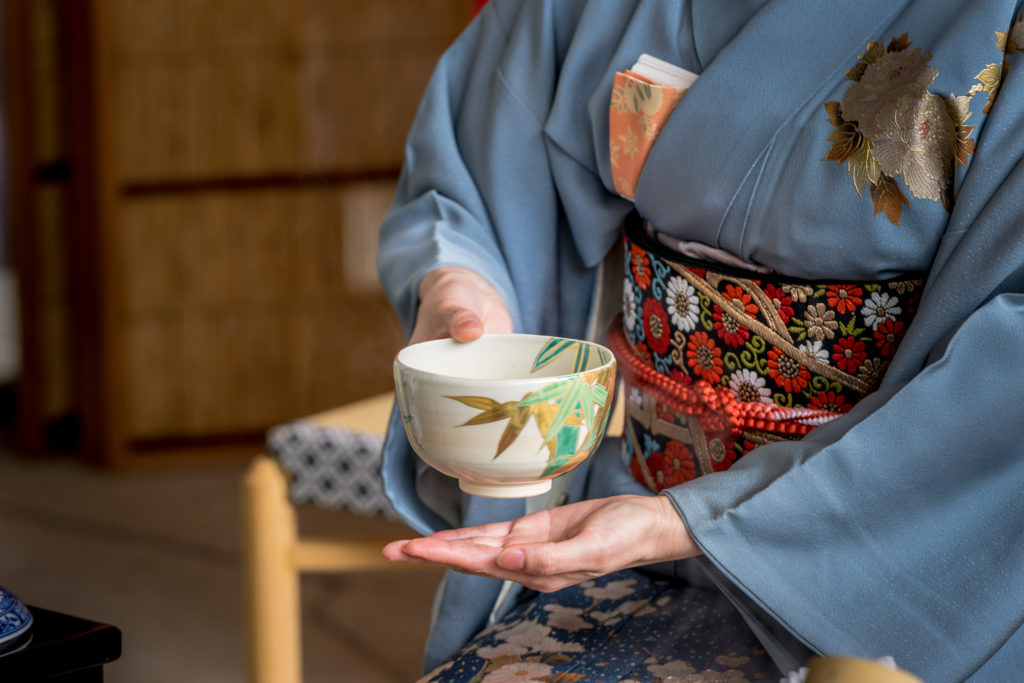 The tea ceremony, also known as sado, chado, or chanoyu “the way of the tea”, is a traditional Japanese art that calls for its own set of rules, proper manners, and etiquette. The ritual preparation of the matcha green tea follows a set of specific steps that are strictly followed by both the host and the guest.

Drinking tea was originally a Chinese practice, used by Buddhist monks to stay awake during prayer, and as a form of medicine. Then, in the 12th century the monk Eisai brought tea leaves to Japan, where he began cultivating them.

Although Eisai is known as the father of Japanese culture, Sen no Rikyu was considered as the founder of the Japanese tea ceremony. He brought structure into the practice, from rules of the preparations, the architecture of the tea house, even garden landscaping.

It seems daunting, at first, reading it like that but there are only three basic rules you have to follow to show good etiquette and appreciation for the ancient tradition.

A Guide To Tea Ceremony Etiquette 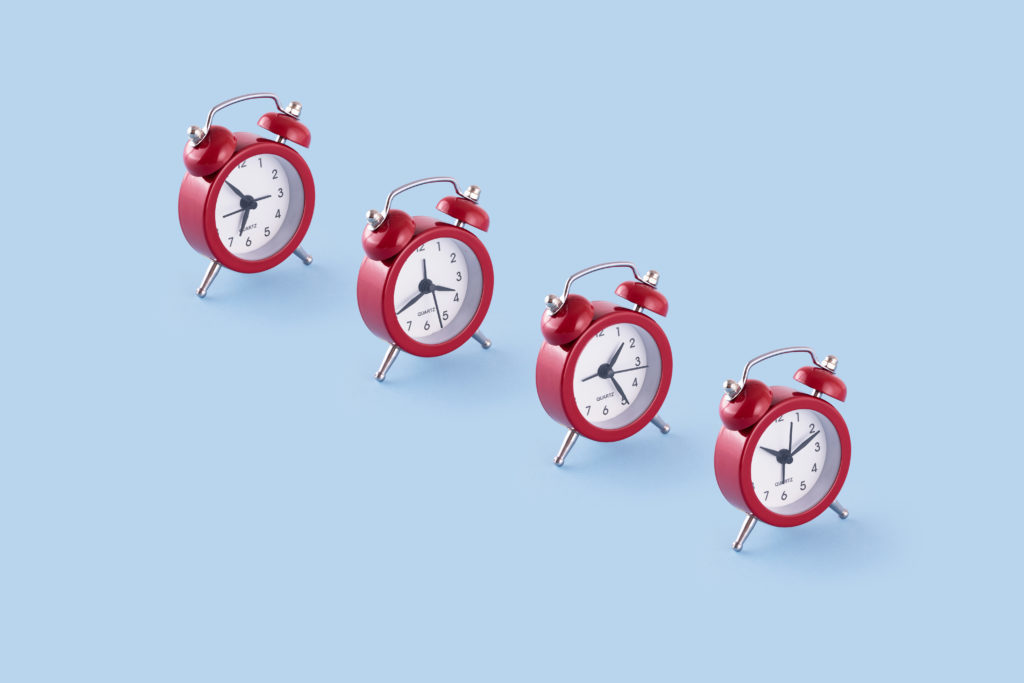 It goes without saying that if you set an appointment, you should always try to make it on time. The Japanese strictly observe this rule in just about every aspect of their life out of respect for everyone around them. At Maikoya, tea ceremonies are held every hour and each delay will affect the next person, and put you under stress. 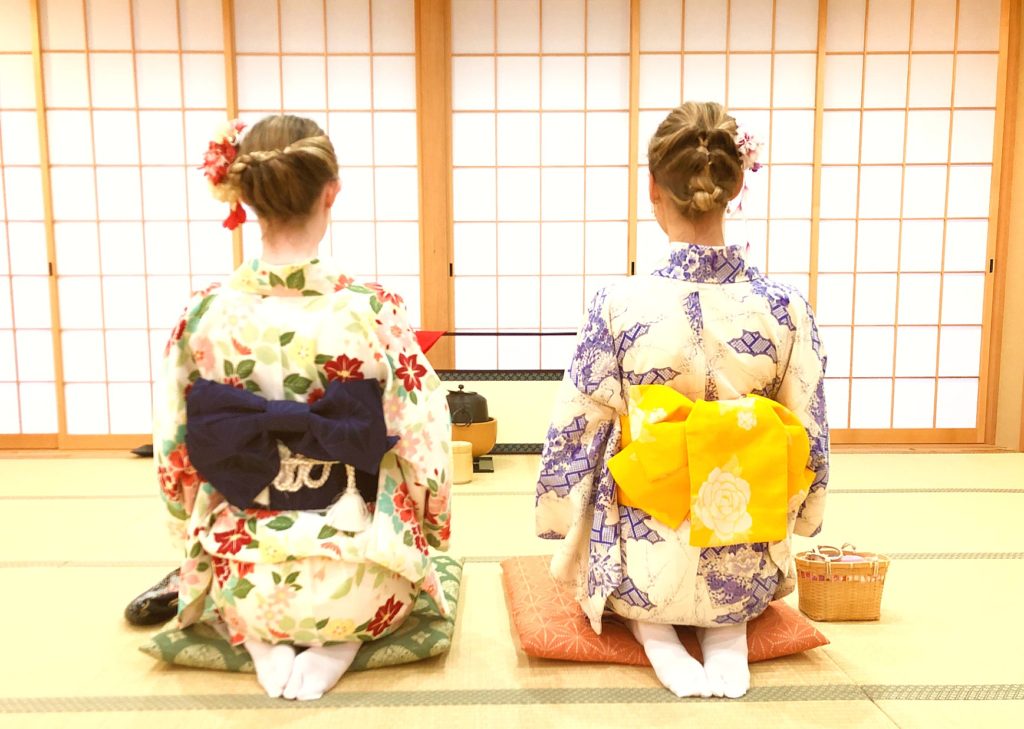 Wear a Clean Pair of Socks

Tea ceremonies are normally held in tea rooms or tea houses that use fragile tatami mats all over the room. Since shoes are not allowed on them, everyone must wear socks. Clean socks will definitely save you the embarrassment of being judged by your own group or the other guests at the ceremony.

Besides saving face, a fresh clean pair of socks will make sure the place you sit on isn’t getting dirty! No one wants to sit on dirty floors and cushions, right? It’s only proper manners. 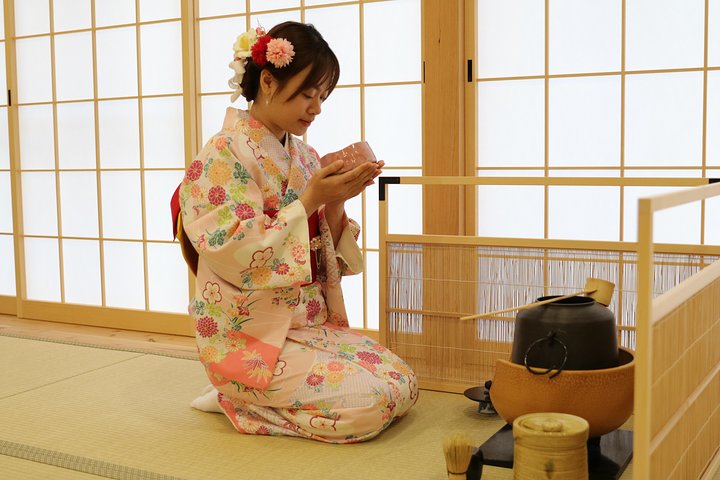 The Tea ceremony is a meditative practice that requires an environment with no distractions. Considering that most places that hold tea ceremonies are in gardens, special tea houses, and serene atmospheres, it really ruins the mood to find someone being extremely loud.

Of course, a little conversation is normal, just like when asking questions about the ceremony or the tools and items in the room. But you should be mindful of your volume. Speaking in soft voices is considered good manners in Japan, no matter the situation. It reflects on someone’s ability to stay calm and level-headed during any given circumstance.

In Japan, it’s frowned upon to make a scene, not just at a Tea ceremony. If you’d like to talk or ask questions it’s best to use a low volume and a soft voice, so as not to break the calm.

While these three rules don’t really have to be said out loud, there are a few more additional guidelines that can easily be overlooked! 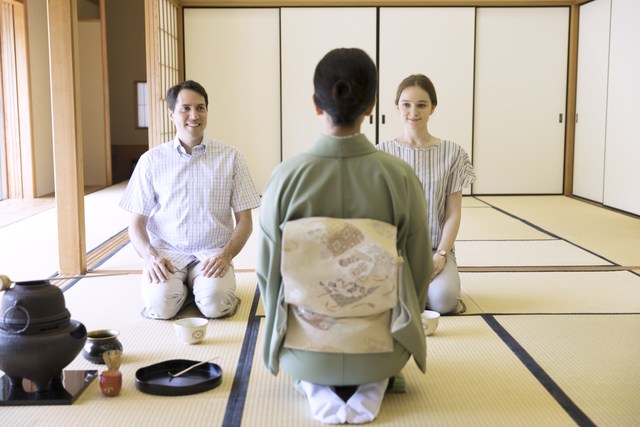 It should go without saying that if you attend a Tea ceremony, you should wear modest and conservative clothes. Since the practice is a form of meditation, distractions like loud clothing and too much skin exposure can affect the experience of everyone in the room – shorts can leave you with red marks from the cushion and the floor, strappy tops and tank tops can be a hassle when you’re vigorously whipping matcha while leaning over on the floor. Overall, it’s uncomfortable.

Normally, you’d find yourself having to wear a kimono while in the tea ceremony. Maikoya staff will always be ready to help you put it on properly while making sure you look your best.

A good rule of thumb to follow when you opt to stay in casual clothes is to wear comfortable clothing that’s not too flashy and isn’t too casual. Just enough that, if you meet with a supervisor in the streets, you won’t feel inadequate and still look proper. Just remember that hats, ripped jeans, and sleeveless tops should be avoided. 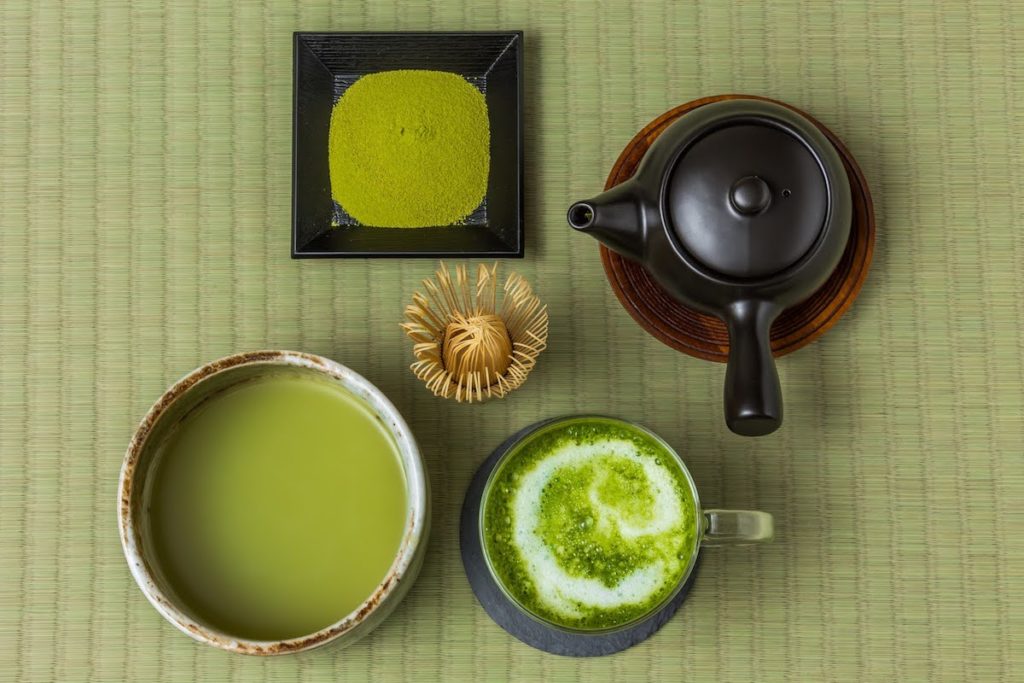 Be Careful with the Vessels and Tools

Some, if not most of the tools at a tea ceremony are generations old, fragile, and require gentle handling. Most tea ceremonies are held with guests and the host preparing the drink on the floor, which makes it easy to avoid accidents unless they’re deliberate.

In any case, the utensils are lent to you and you become responsible for them for the duration of the ceremony. Taking care of items you borrow serves as a sign of respect and good manners on your part, and shows how you are careful with different aspects of your life. 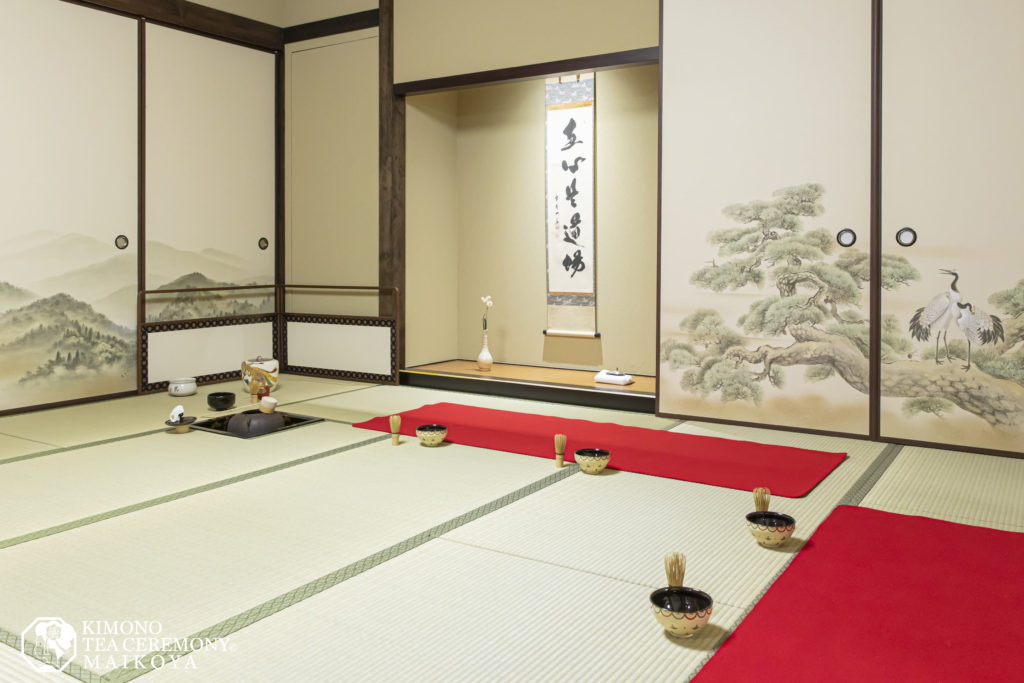 Do Not Disturb the Tokonoma

The tokonoma is a decoration space located at the far end of the tea room. The alcove would usually have a scroll hanging in the middle along with a flower arrangement and paintings or pottery. It is considered a sacred space meant as a display instead of a functional space.

Just like an exhibit at a museum, the tokonoma can only be admired by the guest without touching any of the items or stepping into the area. 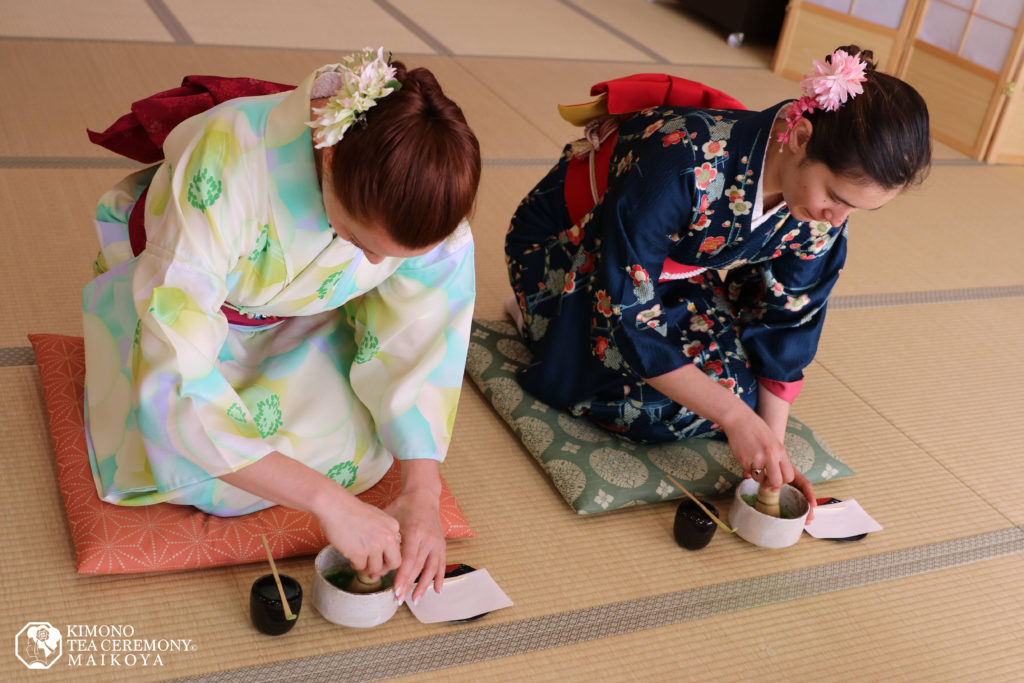 No Phones or Cameras

Most of us like to document just about every single thing on a trip or vacation. Unlike a convention or a zoo, guests are either advised or expected to even turn off their phones during the Tea ceremony.

In this digital age, our phones and cameras serve as our lifeline to the outside world. During the Tea ceremony, the room becomes the entirety of your world for at least a moment. Distractions like phone calls, messages, and even trying to get the right angle of the tea bowl can take away from the whole experience.

Just like when having an in-depth conversation with someone you respect, one of the manners we all adapt to is turning our phones on silent to prevent any disturbances.

At Maikoya, guests are welcomed and encouraged to take pictures before and after the ceremony. 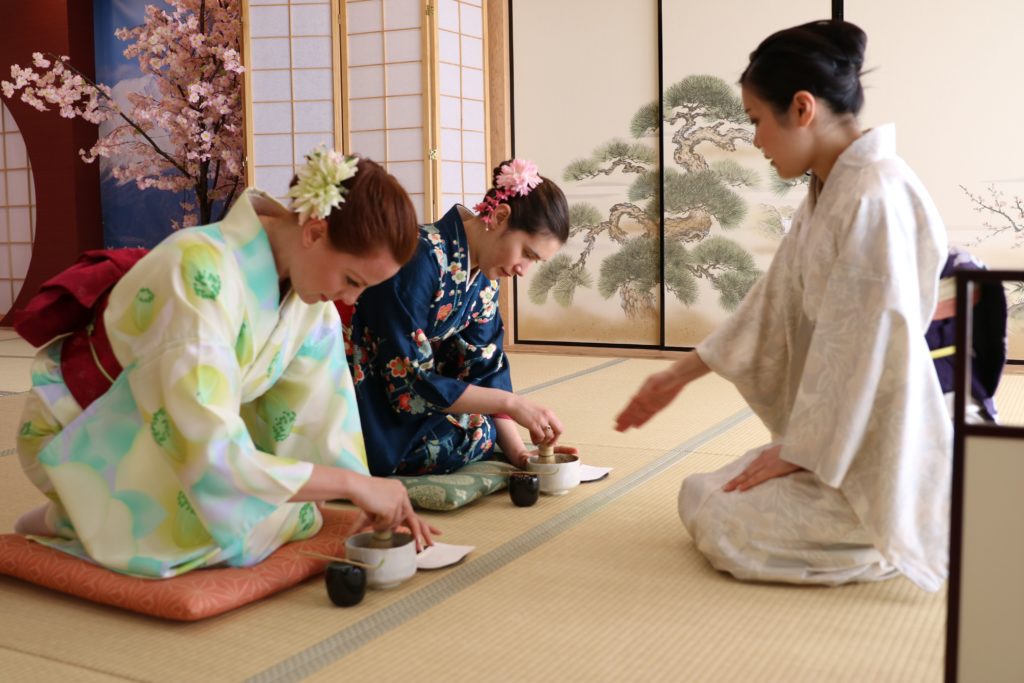 Let the Host Guide You

No matter how many times you’ve participated in tea ceremonies, it’s good etiquette to let the host guide you every time. Wouldn’t it be less stressful that way?

This expands far beyond the tea ceremony and into the social norms and Japanese hospitality. The host will cater to you in every aspect of the ceremony, from where you sit to what you should do.

Finish the Snack and Matcha

Guests are served with one wagashi depending on the host, and it is usually enough for one person. If you want to go into even more detail, the wagashi or traditional Japanese sweet is eaten in three bites and finished before the host serves the tea. The matcha, on the other hand, is consumed in three sips, making a small slurping noise when finishing as a compliment and a signal that the cup is finished. 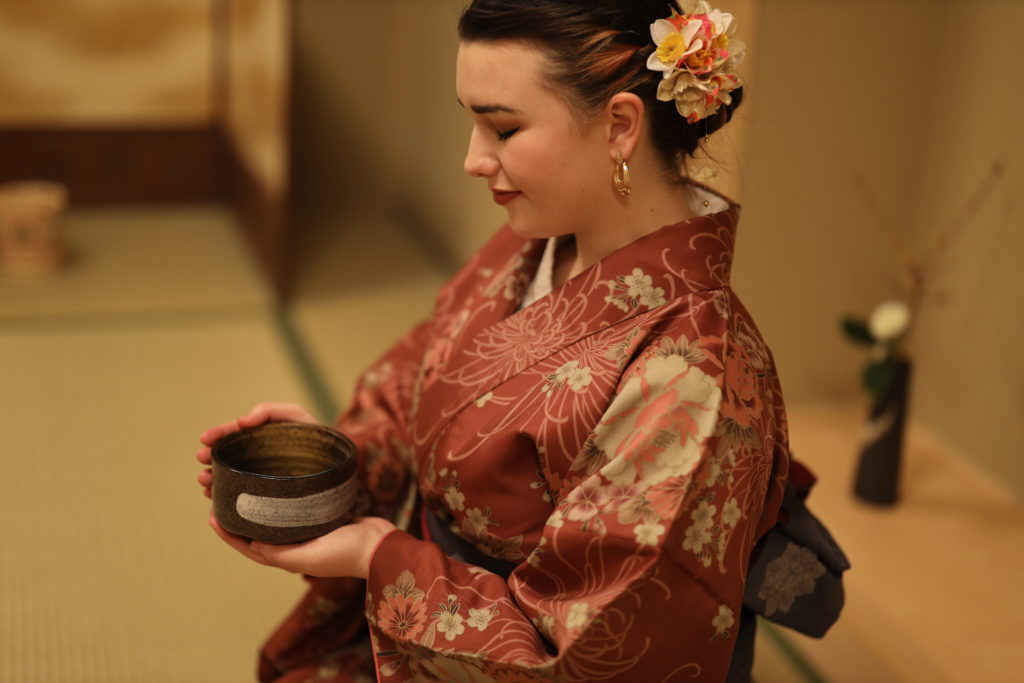 Every single aspect in the tea ceremony and the tea room is carefully placed to create a certain aesthetic and calming atmosphere. While gawking can be a little exaggerated, looking around the room and observing the tools can show genuine interest and appreciation for the setup.

Flattery here will get you nowhere, but sincere compliments and asking about things you’re truly curious about truly shows that the tradition is being valued and respected.

Book a tea ceremony with us today!