There are currently more than 150 million web entries, approximately 100 books, and about 3000 academic studies that are directly or indirectly related to the Japanese tea ceremony–a ritual that started as an activity to stay awake during meditations by monks, which then turned into a way for samurai warriors to form political alliances.

Tea ceremonies have been acknowledged as the core of Japanese Culture and traditions, considered one of the best ways to try the unique experiences that the country has to offer. For this, many tourists, foreign and even local, voluntarily participate in this tradition.

This study aims to explore the reasoning behind the interest and attraction or otherwise that participants hold in regards to the Tea ceremony, instead of simply exploring World Heritage Sites and other tourist destinations in Japan.

Summary of the Study

Kimono Tea Ceremony Kyoto Maikoya has conducted this study to pinpoint the underlying reasoning behind the interest of foreign tourists in tea ceremonies, particularly persons who have visited Samurai Museum Kyoto in the month of October 2020, and customers who have made a reservation at Kimono Tea Ceremony Kyoto Maikoya in November 2020. More than 450 combined international travelers and tourists have submitted their responses to both surveys.

The findings have shown that 38% of the travelers to Japan were interested in joining the tea ceremony. One in six or 16.67% of the respondents who actually joined a tea ceremony in Japan considered experience as the highlight of their trip, with 8.34% stating that it was one of the most unique experiences they’ve ever had in their lives. Tea ceremony was also the most popular experience by foreign travelers compared to the cooking experience, geisha experience, and sumo watching experience as the latter is limited by the seasons or may not appeal to people with food allergies.

The female respondents have shown more interest in the tea ceremony ritual in comparison to males, with most participants stating that they joined the activity to immerse themselves into the tradition and learn about the history, customs, mannerisms and enjoy the unique atmosphere. 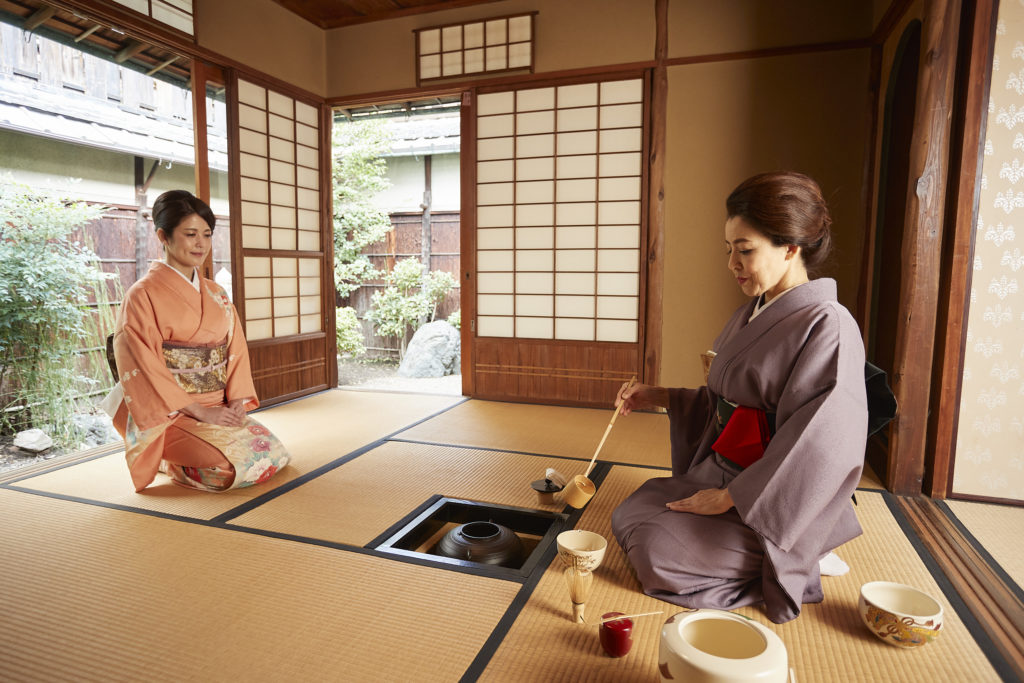 The Japanese tea ceremony is a ritual or cultural activity that involves the solemn preparation and presentation of matcha, or powdered green tea. This ceremony was largely influenced by Zen Buddhism, one of the first instructional books on the proper preparation of tea, “Cha Ching”, written by a Chinese Buddhist priest. This book taught the ideal temperature of hot water and the use of vessels for tea, much like the modern tea ceremonies observed today. Throughout history, tea ceremonies have been observed mostly by those in power or nobles as a show of status.

The modern Japanese tea ceremony is still widely observed in Japan, some more relaxed and using casual settings, while others will have a traditional set up in a tea room or tea house with participants wearing kimonos. Some tea ceremonies, mostly in Kyoto, will be hosted by Geisha apprentices called Maiko.

Recently travelers can enjoy a traditional tea ceremony in English in various teahouses in Tokyo and Kyoto , Kimono Tea Ceremony Maikoya being one of them garnering more than thousands of reviews on Tripadvisor and Google. An annual festival is also celebrated in Japan’s capital, The Tokyo Grand Tea Ceremony, which features displays, classes, and workshops to introduce and observe the ancient ritual with both locals and tourists.

In the first phase, a survey form containing statements in relation to the Japanese Tea ceremony was sent to approximately 3000 visitors of the Samurai Museum in Kyoto in October 2020.

In November 2020, a second phase was initiated and travelers who made a reservation at Kimono Tea Ceremony Kyoto Maikoya were sent an online survey.

The statements in the survey were to be rated whether respondents agree or disagree, according to their experience. An optional portion was added at the end of the surveys for guests to describe their experience and opinions on the tea ceremony.

Participants of the surveys were informed of the collection of data for the purpose of using them in a study. No individual identifying information was collected to ensure the confidentiality of the results.

The first survey sent in October 2020 to 3000 visitors of the Samurai Museum in Kyoto received 367 completed forms, with a 15% response rate.

The second survey sent in November 2020 to 450 travelers who made a reservation at Kimono Tea Ceremony Kyoto Maikoya received a 16% response rate with 72 completed surveys.

Table 2: Results for “Why do travelers perform tea ceremonies in Japan?”

Travelers perform tea ceremonies to learn about Japanese traditions and history. Taste is not a primary factor.

As can be seen in Table 2, respondents were asked their reasons for being interested or otherwise in the tea ceremony. The most common response to this portion was to learn the tradition, followed by the desire to discover a new culture.

The word clout (illus. 1) has been created according to the most common words found in the responses to the essay question as to why the respondents were interested in the tea ceremony. Most responses express fascination in enjoying the unique experience and understanding the particular process of making tea in traditional Japanese history. 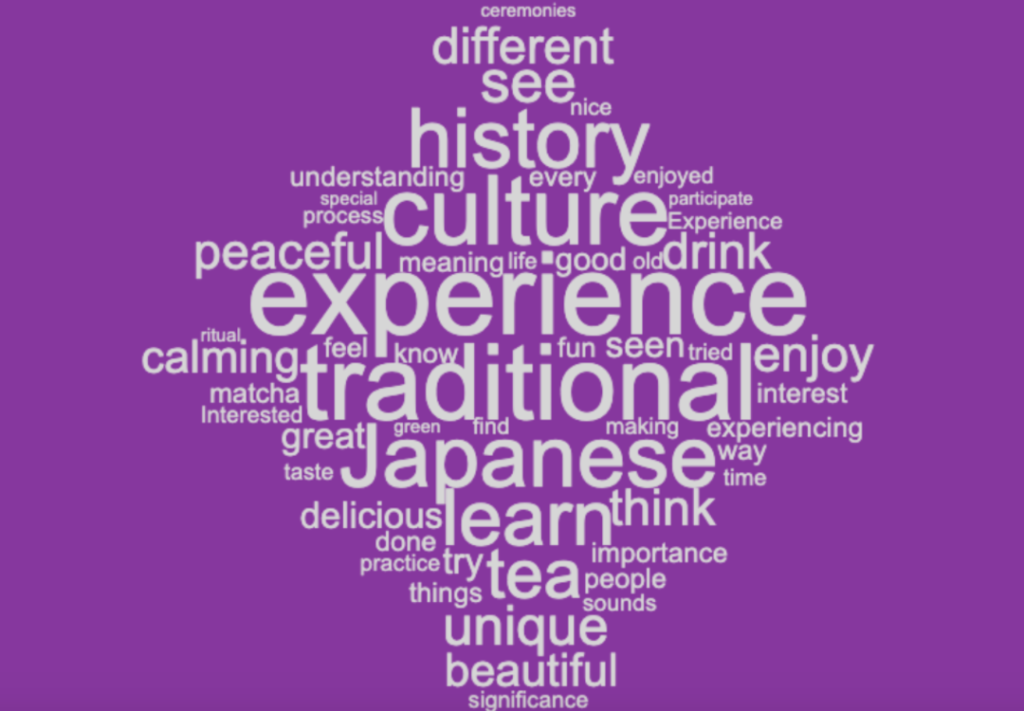 Illustration 1: Word Clout from essay section of the survey

According to the data segregation performed in Table 3 from the survey data collected from the 367 respondents in the October 2020 survey, women held a higher interest in participating in tea ceremonies in comparison to men.

Participants consider the tea ceremony as an impactful encounter

Those who have experienced tea ceremony at Kimono Tea Ceremony Kyoto Maikoya indicated that they view tea ceremonies as a form of ritual and a way to observe the strict customs that need to be followed during the tradition.

According to the results following the surveys conducted by Kimono Tea Ceremony Maikoya Kyoto and Samurai and Ninja Museum Kyoto on their customers, the Japanese tea ceremony is considered a rich cultural experience for those who have tried it.

The results from the respondents as shown on the survey on Table 1 and 2 and Illustration 1 Word Clout indicate that tea ceremonies served as an educational experience that enriched the cultural knowledge of attendees, providing insight into the culture and the demanding process of preparing matcha powder to create the unique powdered tea drink.

A deeper look into the word clout in Illustration 1, respondents have more commonly used the words “history”, “culture”, “experience”, “traditional”, “Japanese”, and “learn”, along with some others, indicated by the size. The majority of these essay responses from the sample population express their fascination and interest in the tea ceremony as a way to immerse themselves into the culture and use the ritual as a way to understand and relate to the history and process of such traditions.

When it comes to the preferences and interest in tea ceremony, the majority of the interest in Japanese tea ceremony, watching and observing geisha shows and performances, and kimono rental are from female respondents, while males are more interested in observing a sumo wrestling practice and match. Both categories of respondents have given almost equal positive feedback with regards to the food tasting tour, the female portion of the 367 sample population coming back with 1.5% more than the males.

The possible reasoning for the females to give positive experience feedback when it comes to the tea ceremony, geisha performances, and kimono activities can be safely correlated to the social aspect of the activities; studies have shown that females are likely to be more social in comparison to men, according to Benenson and Markovits in their study on Social Exclusion.

The female respondents show a positive outlook on their experience, with more inclination to activities that are considered more delicate and require a peaceful atmosphere like tea ceremonies.

To conclude, foreign tourists and travelers choose to experience tea ceremonies to explore the cultural differences and try the unique experiences that Japan offers, be it a tea ceremony, geisha performances, sumo wrestling, and food.

Matsuo (2007). A History of Japanese Buddhism

Maikoya is one of Japan’s leading cultural experience providers with branches in Osaka, Kyoto, and Tokyo. The company specializes in cultural and traditional activities such as tea ceremony, sushi and other cooking classes, calligraphy, flower arrangement, taiko drumming, and the like.